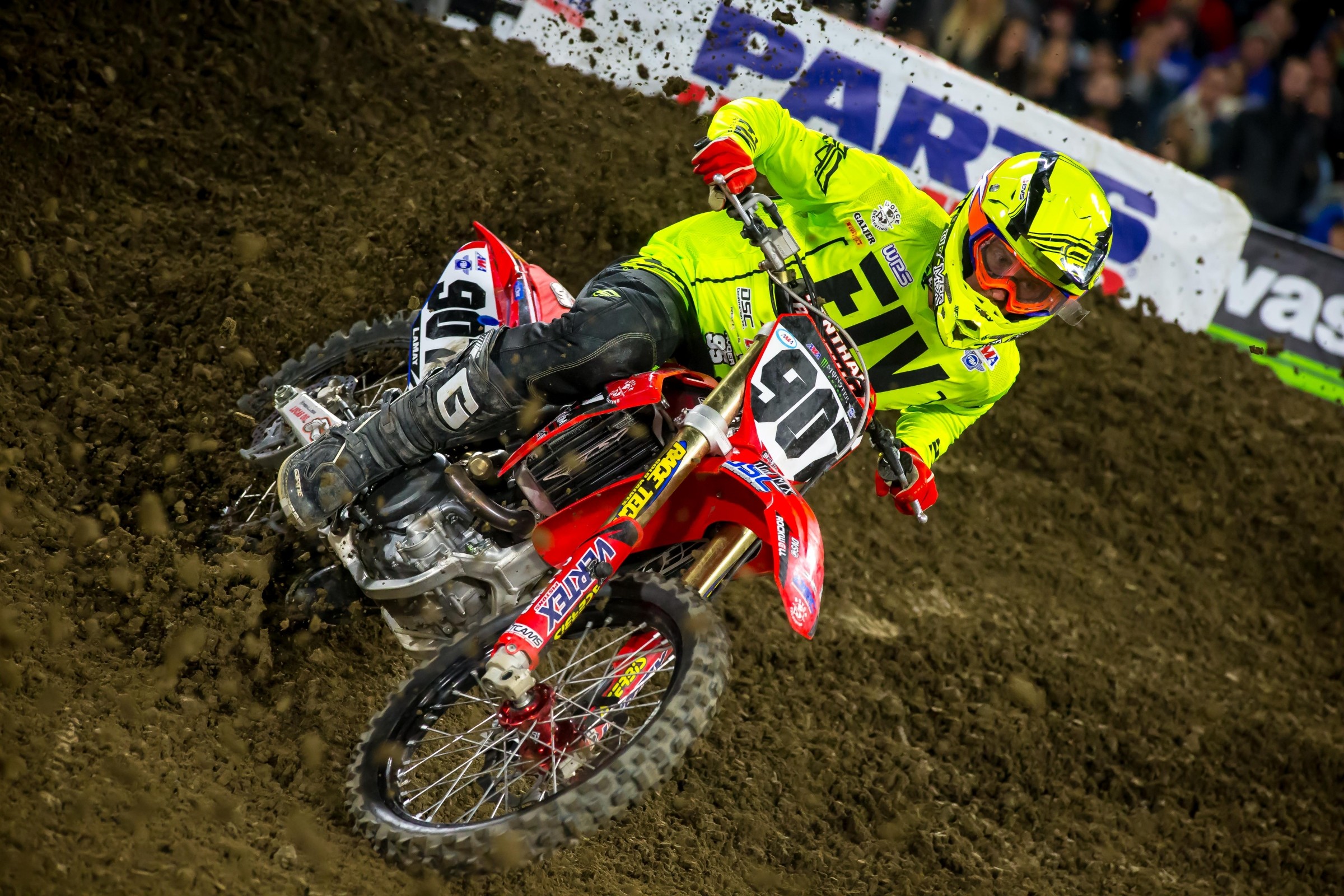 One of the most unlikely journeys into the sport of professional racing is that of Alaska native Ben LaMay. It’s not often—if ever—we see riders from Alaska make it to the professional ranks. Hailing from Anchorage, LaMay turned pro in 2008 following Loretta Lynn’s and enjoyed some successful years in supercross and motocross.

After competing in Amsoil Arenacross for the past couple of seasons, LaMay decided to make his return to Monster Energy Supercross in 2018.  Joining Ted Parks and the TPJ Racing team, LaMay looks to put in some impressive rides in the 450 class and turn some heads. We caught up with him after Anaheim, where he finished 17th in 450SX, to see what his program is like for 2018.

First of all, welcome back to supercross. It's been a few years, huh?
Yeah, the last year I raced SX was in 2015. It feels great to be back racing the 450 in an open stadium.

I bet it feels good to "stretch your legs," so to speak. After racing the tight tracks of arenacross, can you kind of compare AX and SX?
Honestly, it’s hard to compare AX and SX. If you can think of the first half lap of SX, that’s what the whole race in AX feels like: carnage and super busy. The whoops are similar in AX and SX, but honestly, I still have to say AX whoops are tougher because every race you come out of a flat corner with no run at them on a 250 and then they build them super steep and tall. So, it’s very difficult to get on top consistently. I loved racing arenacross though. It made me grow as a racer and learn quick on my struggles physically and mentally.

You experienced some success racing arenacross. How would you say that chapter of your professional career went?
I think I had some spots of brilliance winning heat races, main events, and overalls, but overall in the championship, not the best. In 2016, I crashed with another rider and couldn’t get my bike started and finished last, and in a six-race championship, it’s over. In 2017, I crashed in Reno and separated my shoulder, missing two rounds of the championship, so it was over then, too. I’m happy I went to AX because I learned a lot, met a lot of great people, and had a fun time racing dirt bikes as my job.

So, what was the driving factor that brought you back to racing supercross?
At first, I was planning on racing AX again, but the deal wasn’t what I wanted so I reached out to some teams in SX and found a great spot with TPJ Racing. When I was trying to decide, I was just thinking of all the great things I learned on the bike and mentally in AX and how I could apply them to SX on a style track I feel suits me better. So, I just told myself, “Let’s do it, let’s get 450s and go race SX with the big dogs again and race like I know I should."

Speaking of TPJ, that's your program for 2018, right? Part of the Ted Parks crew?
Yes, I am riding for TPJ Racing and it has been great.

Any interesting Ted Parks stories yet? The season is still young!
[Laughs] So far, nothing to report. He is a great dude, hard worker, and puts together a great program.

Speaking of interesting, you put out a pretty good tweet that said your goal this year is to make people scratch their head and ask, "Who's that 907 guy?" Out to make a statement in 2018?
I mean, I’m racing for myself and to make myself happy with my success and effort at each race. But I also feel like people always underestimate me, and this year I’m here to change that. In the past years during SX, I never really had any standout rides that really made teams talk. I’m going to be impressive this year and hopefully change some people’s idea of what kind of rider I am.

Is that what you're most looking forward to this season? Working your ass off and turning some heads?
I’m focused on riding how I ride at home every day and being mentally strong.

How many rounds are you planning to race? The full 450 series?
I’m racing 17 rounds!

Awesome, well, best of luck this season. Thanks again for taking the time to chat! Anyone you'd like to thank before I let you go?
Anytime, and feel free to swing by the TPJ/FLY Racing truck to say what’s up! I have a lot of sponsors who made this year happen for me, and I deeply want to thank each and every one of you who made it possible: TPJ/FLY Racing, Maxim Honda/Yamaha, DSC Construction, L Beardsley CPA, RTS Inc., U of MX, EKS Brand, Race Tech, EVS Sports, Stratus, Rockwell watches, Hammerhead Designs, Gaerne, Lords of Gastown, Renthal, DVS Shoes, and Guts Racing.