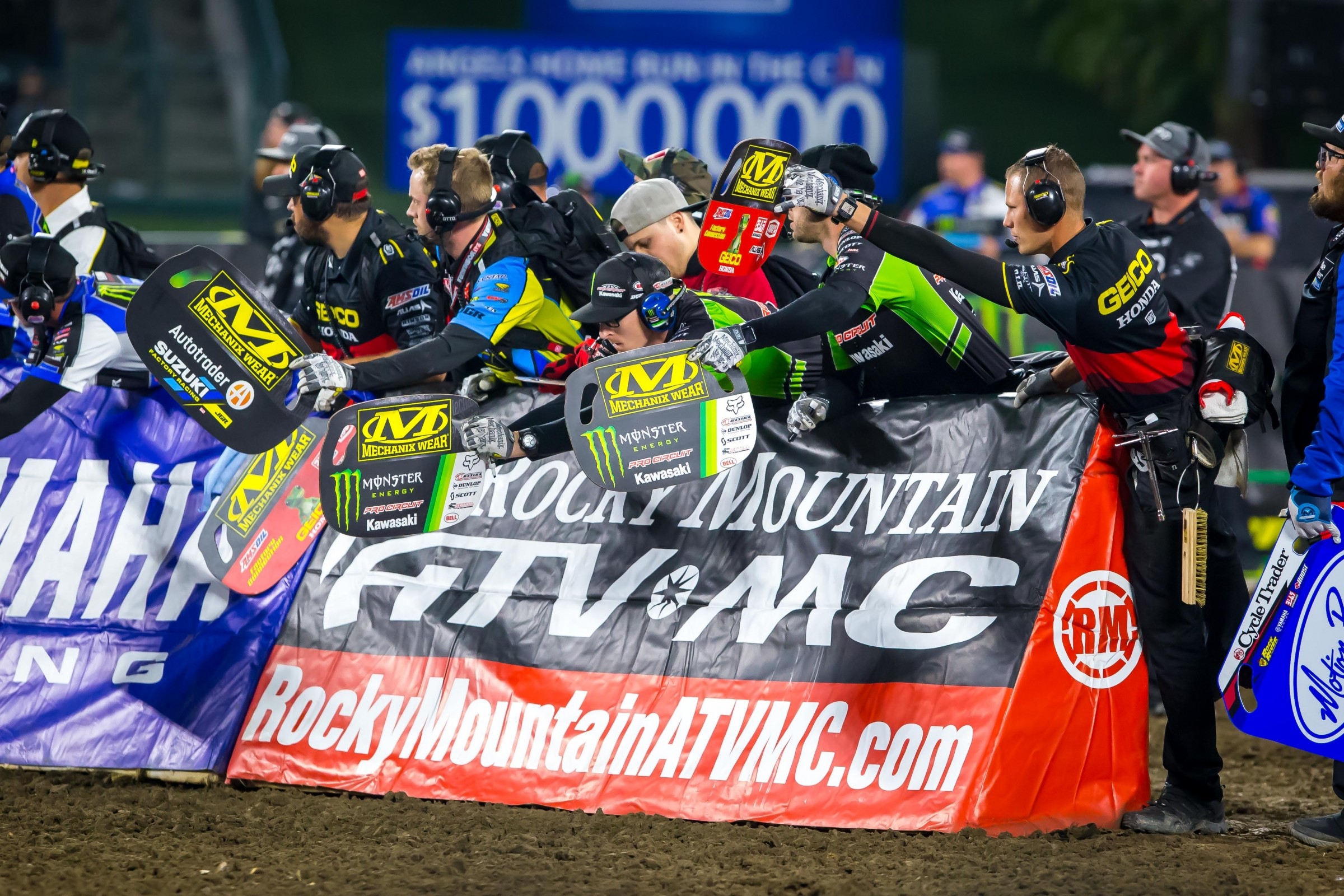 The first supercross race of the year is in the books, and that means we all get to make our wild predictions for the rest of the year. The 2018 version of Anaheim 1 was much softer than what we're used to seeing because of some refined dirt with sand added that stopped the blue groove from forming.

Marvin Musquin continued his hot streak from the off-season by edging out Jason Anderson and Justin Barcia for the 450SX win. In 250SX, Shane McElrath made his mark on the #deepfield by picking up the second Anaheim 1 win of his career.

Musquin and Anderson, the two Baker's Factory boys, went 1-2 respectively at the season opener. Anderson was able to keep Musquin in sight for the entire race, and even started to reel in the Frenchman in the later stages. As you can see by their lap times below, from lap 16 on, Musquin's lap times began to vary while Anderson was able to turn in multiple laps right around the 54-second mark.

One of the questions about Musquin coming into 2018 was, "Will this be the season he figures out the whoops?" This past Saturday, we saw Musquin use two different techniques in the two separate whoop pads. In the first section he skimmed them like normal, and in the second set before the finish line he resorted to jumping through them, going triple-triple-double into the turn.

This technique has been praised by some and criticized by others because it's difficult to do well and often isn't as fast as skimming the top of the whoops. I wanted to see if Musquin was losing any time to Anderson in this section of the track, and for the most part, they were about equal, with Anderson gaining .576 seconds on Musquin over the course of the entire race. (Note: four-tenths of that chunk came on the last lap.) Check out their times for the fourth section of the track below.

Coming into the season, Eli Tomac was pegged as the title favorite by many, but his season didn't get off to the best start. He logged a 22nd place finish after pulling out of the race with a sore shoulder due to a crash while leading.

This isn't the first time Tomac has struggled at Anaheim 1 on the 450. In 2014, he got together with Jake Weimer in a rhythm section during the heat race, which forced him to miss the night show and the next weekend in Phoenix.

In 2015, he crashed while running in sixth on the first lap and was slow to get back on the back. He finished 20th.

He seemed to get something figured out, though, as the next two years he made it out of Angel Stadium with solid fourth- and fifth-place finishes.

In the end, Tomac heads into the next round 25 points behind Musquin. He's no stranger to working himself out of a hole, though, as we saw last year in both Monster Energy Supercross and Lucas Oil Pro Motocross. Provided he's able to compete at close to 100 percent, we should be in for a good comeback attempt.

Also, if you were curious how much time Tomac spent trying to get his pants buckled, we clocked it 11.64 seconds. It's just an example of how even the most simple task can become difficult in a high stress environment.