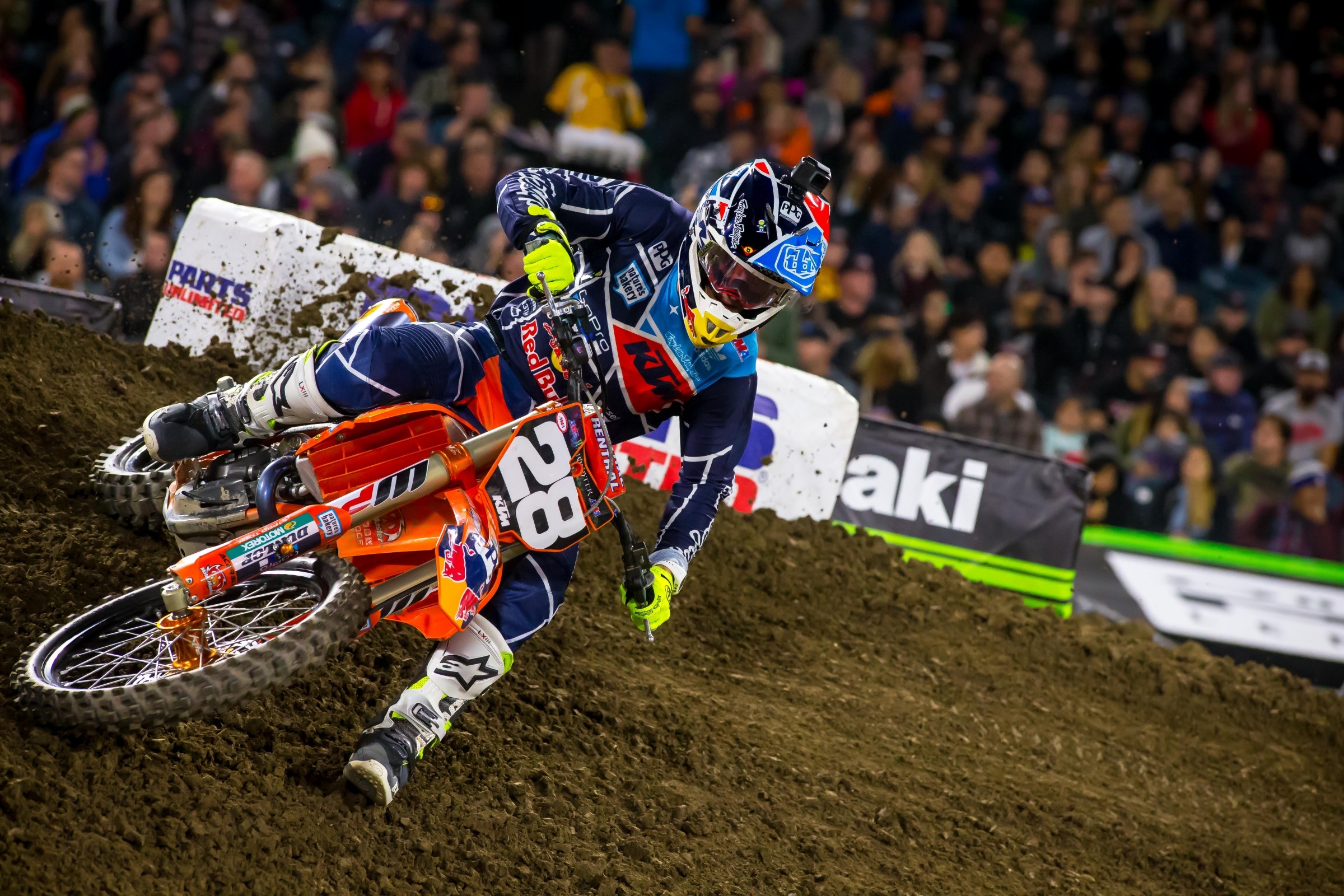 250 Words What We Learned

You already know Shane McElrath won the 250SX main on Saturday (he even set the fastest lap time), and you likely remember he also won it last year. But those aren’t the only things his victories have in common. McElrath led every lap last year, and this year, and in both seasons finished ahead of runner-up Aaron Plessinger. Even the margins of victory were almost identical! Last year McElrath won by 2.299; this year he bested Plessinger by 2.521 seconds. McElrath is probably hoping this trend continues in Houston—he won at round two last year, too.

There was no shortage of talk regarding Justin Hill’s speed and how good he was feeling coming into 2018. And rightfully so—he’s a ripper. But that doesn’t mean things are going to come easy for the champ this season, and his seventh place finish at Anaheim is proof of that. Afterward Hill said he just kind of locked up and that he expects more out of himself. The good news for Hill fans is that he is somewhat of a slow starter—he hasn’t ever been on the podium at the season opener—but almost always improves quickly as the season goes on. Last year he was fifth at round one, took second at round two, then ripped off four consecutive wins.

Stop us if you’ve heard this before: Phil Nicoletti had back luck at A1. His bike broke on press day. He crashed in the very first lap of practice. After crashing on the opening lap of the main, he got absolutely plowed by another rider. To add insult to injury, he then found himself stuck underneath a motorcycle for several long moments. It was even worse than last year, when Nicoletti jammed his rear brake lever on the first lap and ended up 17th after stopping for repairs in the mechanic’s area. The good news? Nicoletti’s got nowhere to go but up. Surely he’ll see the positive in that. Right?

Justin Cooper is No Slouch

Not that we expected him to be, but until you see a rider line up for his first professional supercross race, you just never know how he’ll do under the lights. Yes, Cooper did have to go to the LCQ, but he handled the stress just fine and took the win. And when he got a terrible start—he rounded the first lap in 18th—he didn’t go nuts and start trying to make things happen like we’ve seen rookies do in the past. Instead he settled and steadily moved forward, making his way to ninth by the end. Patience isn’t something you often see in a rookie, but so far, it’s looking like Cooper’s got it.

Neither is Chase Sexton

It’s weird to think of Chase Sexton as a rookie since he’s been around for a while, but due to a series of unfortunate injuries, he’d never actually lined up for a 250SX main before A1. He did pretty well in his first attempt, too. He qualified in his heat despite getting taken out on lap five, and, while he did go backward just a little bit in the main, still took a respectable eighth. Not bad for his first supercross.