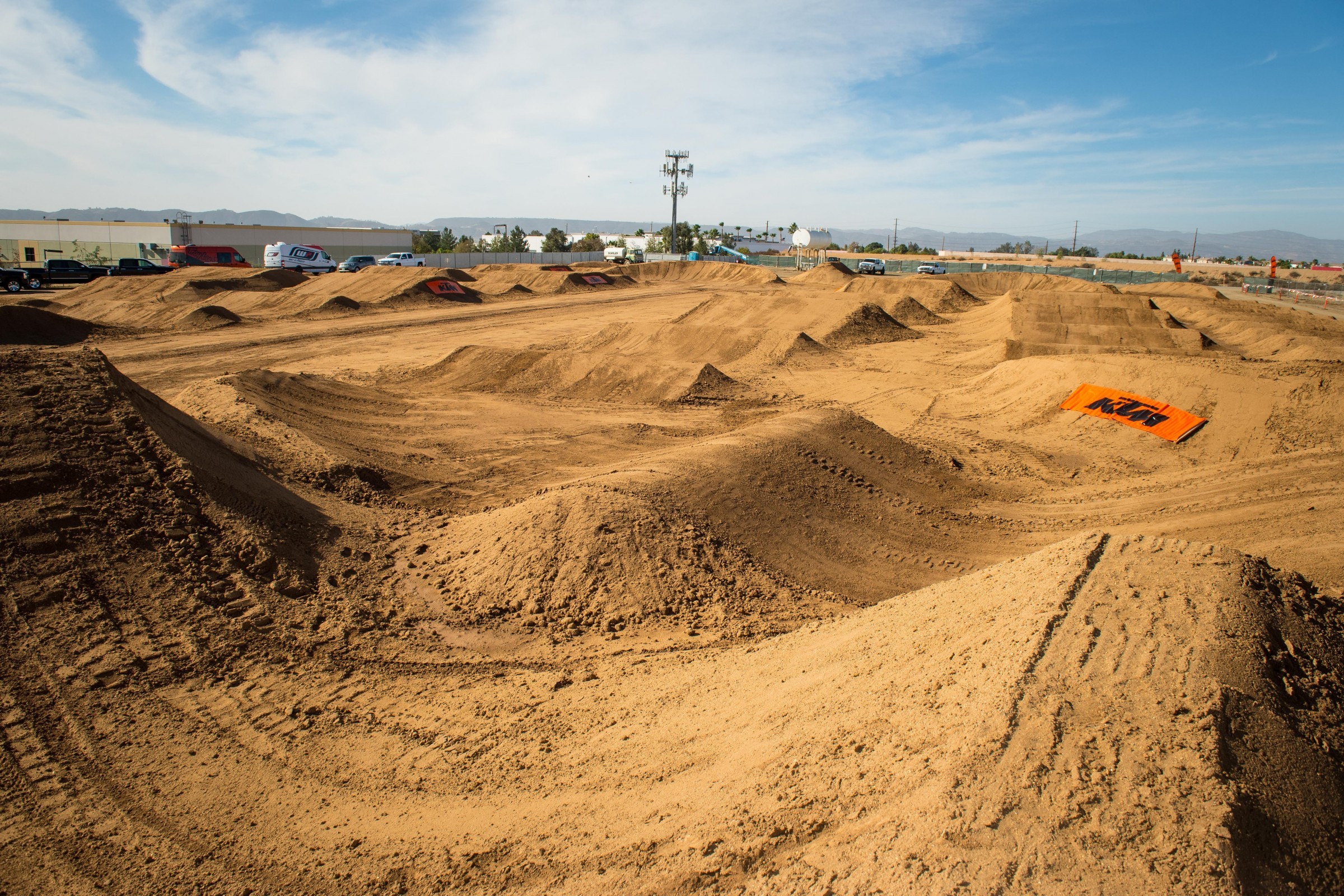 A few years back, a book chronicling the history of ESPN was titled “These Guys Have All the Fun.” No doubt, anchoring SportsCenter was a dream job for most—in fact, ESPN even ran a reality show looking for a new anchor and aptly titled it “Dream Job.”

Not everyone dreams of calling LeBron James highlights, though. There’s a swath of people who would consider patrolling Southern California’s factory test tracks as the real dream job. But do these guys really have all the fun?

Our man Simon Cudby is one of the most sought-after shooters in the motorsports world, and he’s the go-to guy for many teams’ official photo shoots. That autographed poster you got at a supercross? The photos on it most likely came from Cudby.

It’s not all fun, though. Teams schedule photo shoots during two crazy weeks clustered around early December. The days are long, the pressure is high, and the weather doesn’t always cooperate. Cudby sent us this diary entry to give you an idea of what it’s like.

The past few weeks have been a whirlwind of photo shoot activity, as many of the teams shoot their 2018 media assets around the first two weeks of December.

November 28: We started shooting with the Rockstar Husqvarna SX/MX team at the Husqvarna SX track in Corona. Teams require sponsor images, so they do every combination possible for static photos, such as wearing different hats, holding energy drink cans, sporting different gear colors, wearing helmets, no helmets, etc. Just to give you an idea, we had to shoot tons of photos of guys standing by the bike and holding the Rockstar can in each colorway of gear, then holding Scosche Bluetooth speakers, also in each colorway of gear. For some years, teams also need photos of the riders holding bottles of oil, a pipe, any sort of sponsor product. You’ll see these images throughout the year in ads for those brands. When that was done, we then shot action images in multiple gear sets.

November 29: KTM off-road factory team shoot at a private track east of San Diego. We start early, so we left Orange County at 4:45 a.m. to make the two-hour drive south. At least there is not much traffic that early! Great day of shooting, but Southern California has not had much in the way of any rainfall, so the trails were very dusty.

December 4: KTM Media shoot at the new KTM SX track around the corner from their race shop. This was a chance for the media to shoot photos and video of the Red Bull KTM, Troy Lee Designs/Red Bull KTM, and Rocky Mountain ATV/MC-WPS-KTM.

December 5: Official team shoot with Marvin Musquin and Broc Tickle. Always a good experience working with these riders and this team. Again, you’d be surprised how many variations of shots are needed. For Marvin’s headshots, he has to wear multiple sets of gear, then multiple hats, then some with the helmet and some without, some with a neck brace, and some with his goggles. Multiply all the variations and you end up shooting more than 20 different headshots of a rider.

December 7-8: GEICO Honda team shoot. We shot all the static bike shots and rider headshots at the Factory Connection/GEICO Honda HQ in Corona on Thursday, then action images at the Honda SX track on Friday.

December 12: Husqvarna off-road team shoot. Up at 4 a.m. heading out to Chaney Ranch for a 6:30 a.m. start time. That’s what the team wanted to do! Very dusty on the off-road trails.

December 13: Honda team shoot with Cole Seely and Ken Roczen at the Honda track in Corona. Both riders looking very fast and smooth. Roczen looks as fast as ever. Again, we had lots of variations to shoot here, but the riders were easy to work with.

December 14: Honda media day at the Honda SX track in Corona. We covered the event for Honda and provided images of the press conference and the on-track action.

Once I got back home each day after all these shoots, I would spend three-plus hours editing and uploading client files so I could start the next day’s work with a clean slate. Also, you have to make sure all of your camera gear, lights, and other things are well-maintained. It was dusty during the Rockstar Husqvarna off-road shoot on Wednesday, so I had to make absolutely certain all of my gear was dialed back in and perfect for the Honda HRC team shoot the very next day.

What’s also cool is when team sponsors come and request a couple of extra shots for their stuff. Tallon Vohland, of Acerbis, came to some shoots and had riders run through the whoops running hand guards or different front disc guards. These photos will come in handy for sponsors throughout the year.

The main thing is how many hours these shoots take up, and you absolutely can’t mess it up. Also, the teams have to be careful of what sponsor images can be seen at what time—contracts all begin and end at different times, and there can be big penalties if an image gets out too early. Especially when you consider that everyone has a phone and access to social media, it can get a little stressful. It takes a lot of coordination to make it all work.