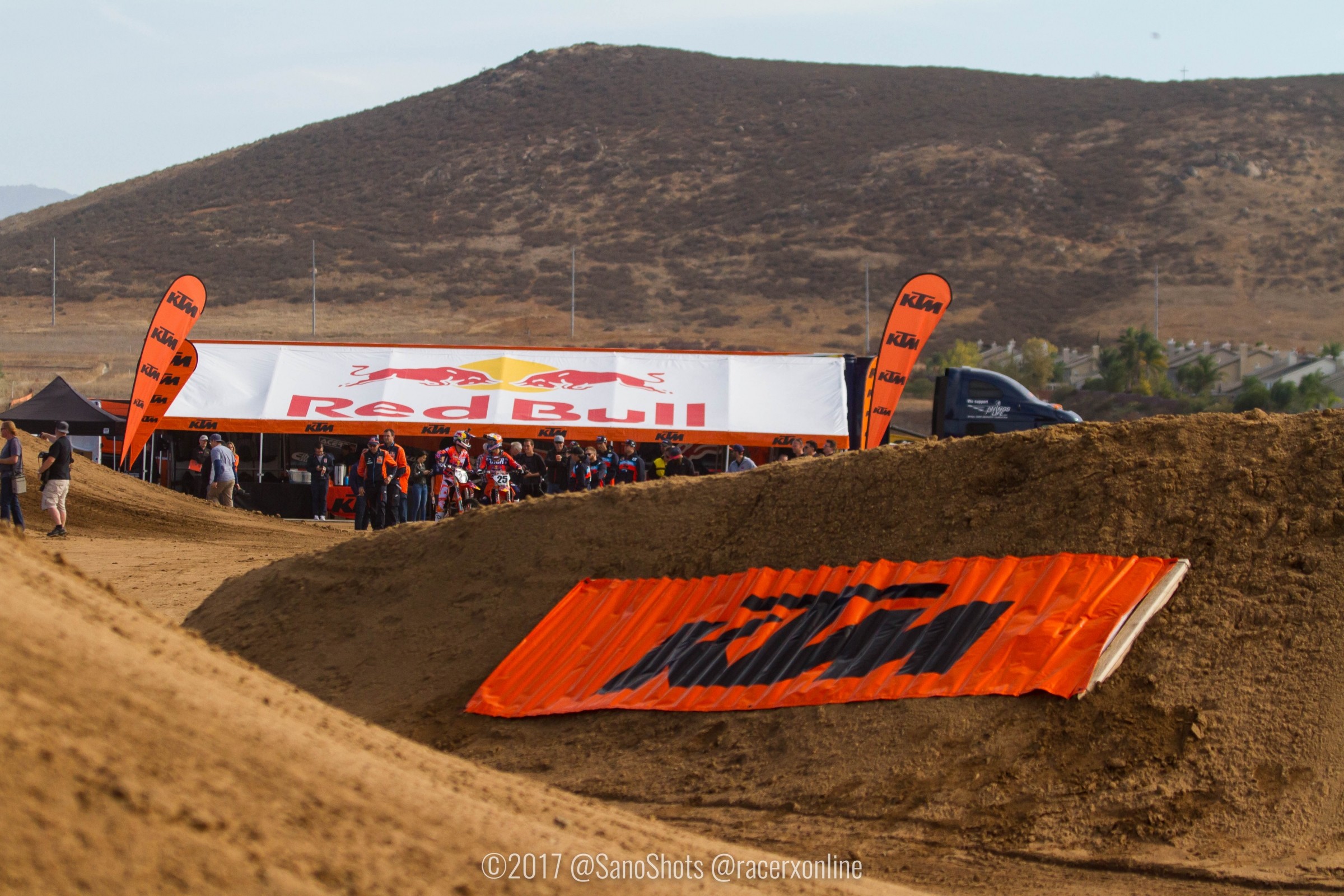 Last week KTM introduced its 2018 KTM 450 SX-F Factory Edition alongside team introductions for Red Bull KTM, Rocky Mountain ATV/MC-WPS-KTM, and Troy Lee Designs/Red Bull KTM. They went one step further to also introduce us to their new supercross practice track: RD Field. The new track is just a block away from their U.S. headquarters (and race shop) in Murrieta, California, which is a big deal. RD Field is named after Roger DeCoster and Ryan Dungey, who helped bring KTM their first supercross championship and helped catapult the KTM brand to become one of the leaders of the industry.

Many may wonder why they didn’t  build a test track next to the shop a long time ago. Well, much like the traffic in California, zoning and regulations are a nightmare. From sound tests, to environmental impact studies, geological surveys, permits, and going through all the other jumps and hurdles, its been a three-year process getting RD Field approved with the city.

Being located in an industrial area definitely helps, but they’re still working within some tight regulations. With a housing tract being built within sight of the track, the time of day which they can ride is regulated from 9 a.m. to 2 p.m. Thankfully for KTM, though, the property the new track is on was previously a parking lot for heavy equipment and is directly next to French Valley Airport. That puts the new track under the flyover zone,  so the bike noise gets drowned out by airplanes.

KTM plans to keep their current supercross test track in Corona, at least for now, to give their teams and riders all the resources they need to be successful. Having a track right next to the shop is huge, as it will streamline the development of the bikes. Now, the team can bounce back and forth as needed to make adjustments and try new things. The existing KTM track in Corona is a 30- to 45-minute drive one way, so being able to pop up to RD Field is a wildly popular undertaking for the team. Not only does this new track make testing easier, but it also gives the non-race team employees a chance to enjoy watching the guys ride—something that was more of a hassle than it was worth when it required clocking miles on the 15 freeway to Corona.

With another three supercross tracks in Florida at the Baker’s Factory (KTM and Husqvarna have an exclusive contract with Aldon there) and plans for an additional supercross and EnduroCross track being added to RD Field in the future, KTM’s commitment to racing seems to have no bounds.