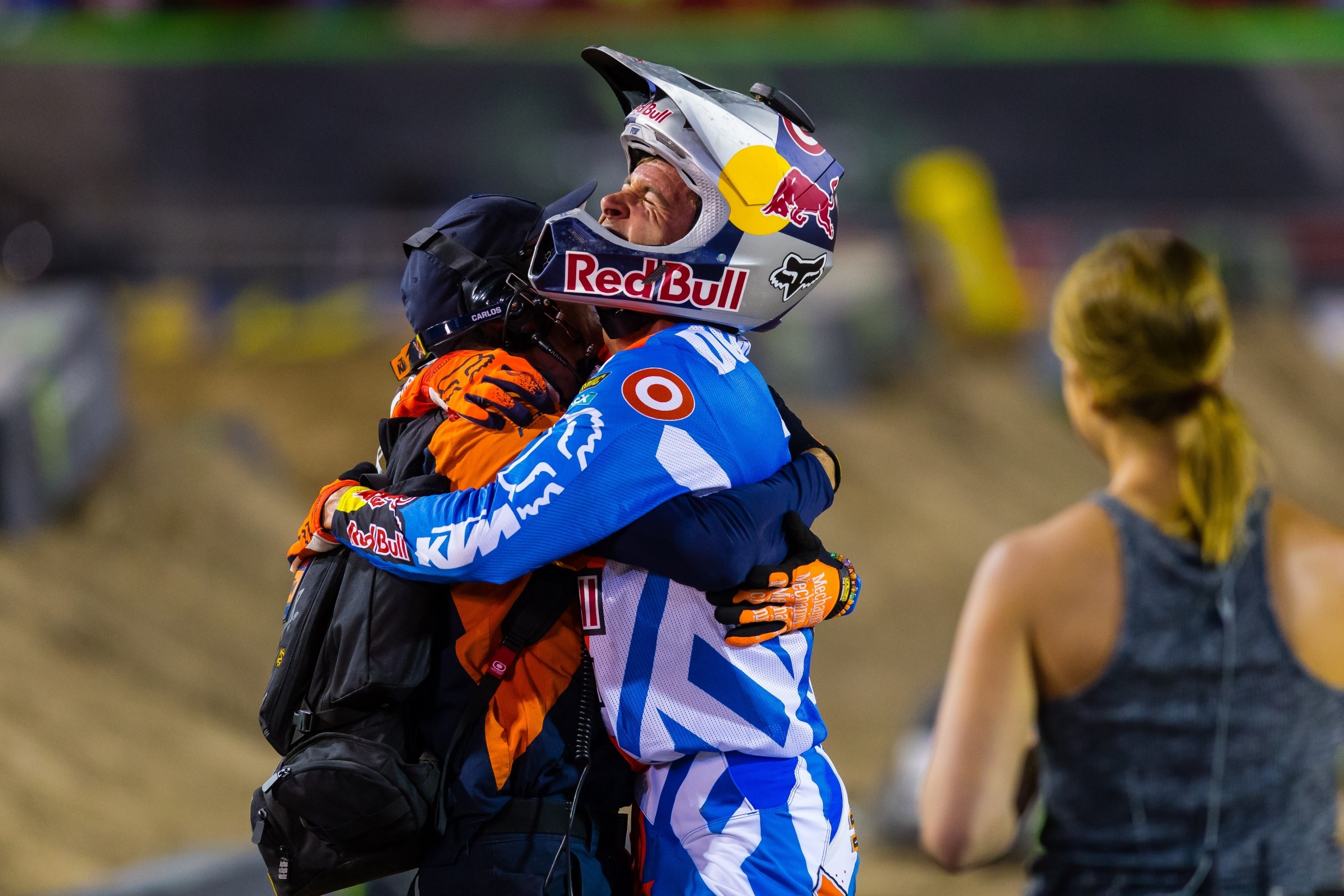 “He had broken his neck, we were at home, and I can tell you he did not want to come back. He did not want to race this season,” Lindsay Dungey, Ryan’s wife, says in Fox Racing’s new documentary "ALWAY5: The Ryan Dungey Story." “He was going to call everyone and say, ‘This is it.’ ”

When Dungey retired just days after hoisting another supercross championship trophy, it immediately brought up memories of Ryan Villopoto, who by 2014 had logged work in body but not spirit. Villopoto had soured on the process that allowed him to win races and titles seemingly on autopilot. He was successful, but miserable.

This is what people pictured as Dungey stepped away during a May press conference, but it really wasn’t the same. Dungey wasn’t burnt on the work, the pressure, or the fame. He was simply scared. The most consistent rider in the sport’s history, the rider who had gone nearly ten full professional seasons without an injury, broke his neck in a crash at the 2016 Thunder Valley National in Colorado. Doctors told him he was nearly paralyzed. It was a sobering reminder that even he was not immune to the dangers.

Baker told him to stay with it and at least begin the supercross season. Race January and February and reevaluate from there. By the time they got there, Dungey once again had a big points lead. He would stick it out until May.

“I decided I was making a decision out of fear, and I can’t make a decision based off of that,” Dungey says. “I won’t be happy with myself if I do that. I would just take it one race at a time. I can be done in May. I just said to myself, I can be done after Vegas, and that’s it.”

Ryan did not suffer another injury like he had feared, but the season took a mental toll like no other. He paid the price for it. When I hung out with Dungey for lunch the day before the 2017 season began, it was obvious he had found peace with the decision to keep racing. I had never, ever, seen Dungey more relaxed and comfortable with himself. The industry, fans, and pundits wondered if he could withstand the coming challenge from Ken Roczen and Honda, but Ryan didn’t look worried in the least. Ironically, Roczen would end up striking fear in Dungey’s heart, but not through speed or race wins. When Roczen crashed out of Anaheim 2—ending his attempt to unseat Dungey as champion—it reminded Dungey of the dangers. Although Anaheim 2 represented Ryan’s first race win of the season, the success on the track no longer mattered. In the post-race press conference, he was subdued. He feared for Kenny. He feared for himself.

“That definitely didn’t help,” Dungey said in his retirement press conference when asked about Roczen’s injury.

Round two and three of 2017 saw vintage Ryan Dungey. He was a close second in a 22-minute battle with Roczen in San Diego and won at Angel Stadium. But after the Roczen crash, he wasn’t the same. The next weekend, Eli Tomac dominated in Glendale, Arizona, and Dungey, curiously, struggled with a difficult rhythm section. Chad Reed outdueled him to finish second.

Over the next few weeks, Tomac caught fire while Dungey misfired, compared to previous standards. He was regulated to the semifinal qualifier in a few events. His teammate Marvin Musquin was faster than him on occasion. In late laps, the time when Dungey’s diesel style usually kicked in, he actually lost a few positions. These assorted struggles made it clear that this was perhaps only 90 percent of the Dungey we had seen the previous two seasons.

“There’s nothing more difficult than having that inner battle with yourself,” Chad Reed says in the Fox documentary. “I feel like in 2017, you saw a different Ryan.”

The theories started flooding in. I covered several of them right here, in February, with the title “Is Something Wrong with Ryan Dungey?”

I talked to Dungey again during press day at the New Jersey Supercross. The previous weekend, Tomac came from nearly last place to pass him for the win and sole possession of the points lead. That pass felt more like a passing of the baton. At that point, rumors spread that Dungey would retire before Lucas Oil Pro Motocross. He’d gone through the “lapper gate” drama with Reed. At one race, Dungey, the master of avoiding quotable controversy in the media, shrugged off a loss in a post-race interview by saying, “It’s only a dirt bike race.” That really opened the door. Was his heart still in this?

When I talked to him quickly in New Jersey, I actually approached him with a narrative in mind. Sure, he might not win this title, but that wasn’t going to spoil his legacy, right? With his “it’s only a dirt bike race” quote, it appeared Ryan was reminding himself that he’d had a great career and a great life, and he’d already exceeded all of his expectations as an athlete. No reason to live and die based off of the final two races, right?

Well, Ryan didn’t take any of that. He talked solely about fixing his struggles in the whoops, which he felt cost him the race against Tomac the week before. When I asked him if he could still win the title, he answered with a resounding “Yes!” That seems like an obvious answer, but I’ve heard many, many riders try to remove pressure from the moment by sidestepping that question. Dungey had an easy out—he could have said he doesn’t need to prove anything to anyone, that all he could do was his best and give it his all and be happy with that. He still wanted this title, though, and he was willing to admit it.

Now, it would have been cool if Dungey had gone out with two-straight clutch wins, but that’s not what happened. He only won in New Jersey because Musquin pulled over for him. He only got the points lead back because Tomac faltered. Tomac was clearly faster in Las Vegas, but jacked up the race on purpose to try to shove more riders in the mix and jack up the points. Dungey held on. That, essentially, is what Dungey’s final season became. He held on.

“He never quit, and to me, that’s bigger than winning a title,” Carlos Rivera, his mechanic, says in the Fox documentary.

The full “ALWAY5” video runs 32 minutes and chronicles the Dungey family’s humble beginnings in the sport, with quotes from the right people, including former Suzuki amateur team manager Cole Gress, and, of course, Roger DeCoster and Ian Harrison. Success came suddenly and shockingly, and Ryan had to adjust.

“I was just on cloud nine, but then it was like, here comes the learning process,” he explains. “How to win a championship, how to win a race, how to back it up. I didn’t manage it all the best. I mean, I was 17 years old, so you only know so much. My mom and dad were trying to help me with the finances, and there were fights over all this stuff. I by no means was an angel. I was pretty rude.”

While Dungey is known outwardly as one of the most level-headed riders both on and off the track, even the hardiest soul isn’t immune to the wild risk and reward ratio required by this sport. Ryan Dungey gave the sport his all, and it required every bit of it, right down to the very last lap.