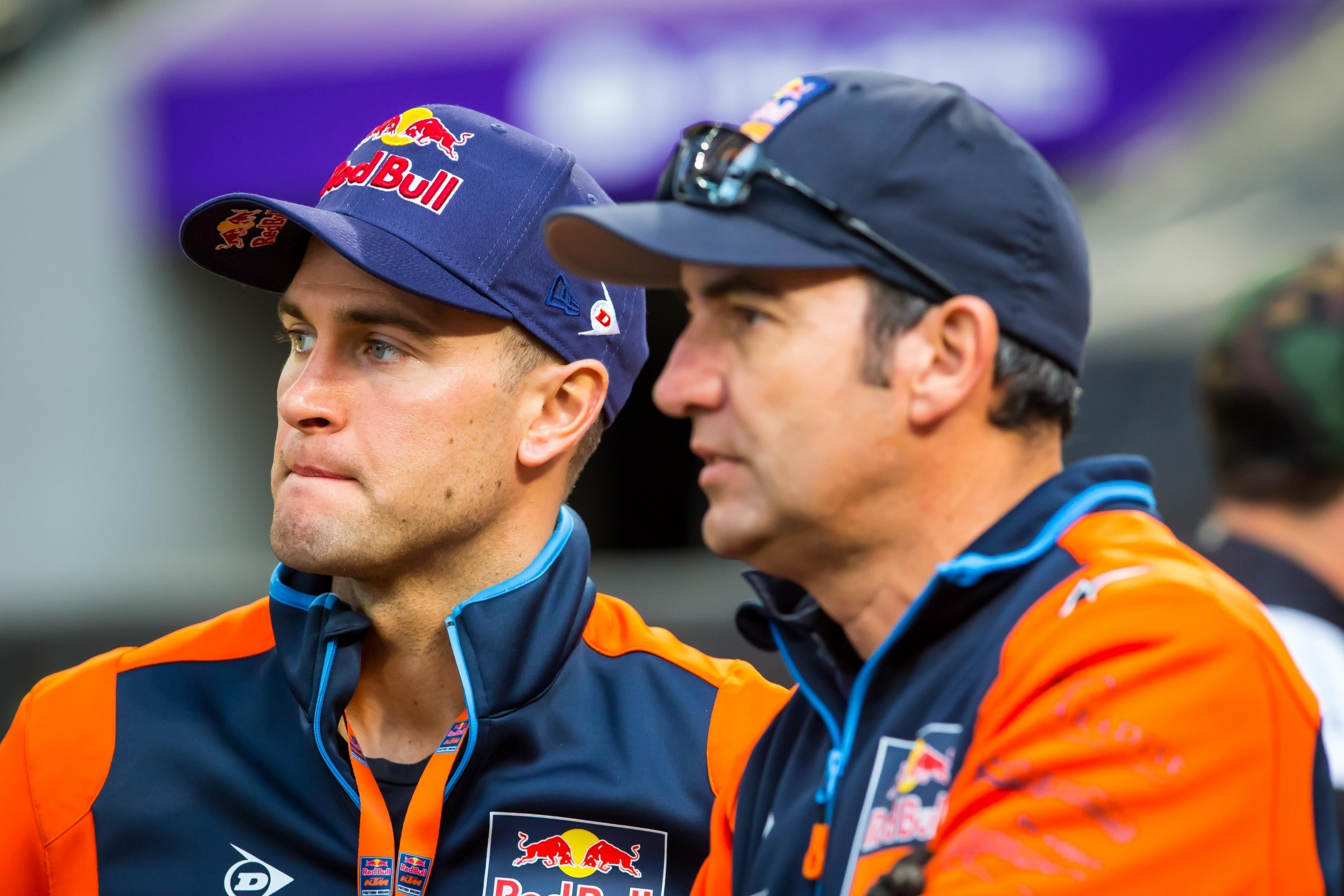 Exhaust: Is Something Wrong with Ryan Dungey?

If you’re an alien or a new fan of the sport, the following words will make no sense to you. To the uninitiated, nothing could be wrong with a rider holding a 16-point lead seven races into Monster Energy Supercross.

More experienced race watchers know what they’re seeing, and they’re asking. Once again my twitter, texts, and individual conversations this week are littered with “Wait, is something wrong with Dungey?” questions even though he’s been solid, good, and on the podium in all but one race (where he still finished fourth).

The last time he raced in Minneapolis, he fed off the crowd and beat Ryan Villopoto straight up. This time he lost some ground to Eli Tomac and got caught and passed by his teammate Marvin Musquin. Another good night, but another one that could have been a little better. After he won round three and Ken Roczen went out with an injury, it looked like Dungey was going to assume the crown again. Well, assume nothing because Dungey quickly scoffed at the remark with #ThereWasNoCrown. Turns out he was right.

I could go on with exact race details, stats, or results to prove we’re not seeing 2015 or 2016 Ryan Dungey, but I don’t think I need to.  The last two years, we just knew Dungey was the best rider in the series around the halfway point. This year, we can’t say that. His qualifying efforts and heat races have been okay but not great, and he’s also been caught and passed in some main events lately. I wouldn’t be asking this question if others weren’t asking me in the first place. Is something wrong here?

Before we get into this, I want to remind that this type of analysis shows not only that #ThereWasNoCrown, but also that #HeavyLaysTheCrown. Only the winner of two-straight titles operates under this type of scrutiny. But hey, established excellence is just that. LeBron James gets the same heat if he has a few bad games, too. He also gets to be called King James and makes tons of money.

So look, we write this completely and totally knowing it’s unfair. But we also know how this sport works. Elite riders don’t go through prolonged slumps, and by about the halfway point of the season, the die is usually cast. Massive turn arounds don’t often happen by this point in the season, which means the momentum captured by Tomac or Musquin could last for quite a while, and then Dungey could have some troubles in the points.

That only makes this season more puzzling. Rarely does a rider open up this size of an early points lead without being head and shoulders better than the rest of the field. Dungey has the points lead, but hasn’t established dominance. It’s a very strange scenario.

Now people are coming up with theories, each one of them a guess, because the truth runs the gamut from “Nothing is wrong at all and Dungey is about to win again as soon as this weekend” to “there’s a problem and he’s keeping it secret.”

Allow me to visit some theories I’ve heard:

#1. He’s just protecting the points lead: This could very well be true, although we have to explain it a bit. What Dungey is NOT doing is going to the races thinking a series of seconds or thirds is going to get the job done.  He knows better than anyone that consistency alone doesn’t win titles, as he has always been consistent, but in years like 2011 (one win) or 2013 (two wins) he didn’t win enough to net the title. I will argue to the death that Dungey doesn’t “take” podiums like most people say, but rather tries his hardest to win but sometimes ends up finishing second. HOWEVER there is reason to think this year he actually is riding smarter instead of harder. First, the local weather has been brutal at most of the races, so the tracks are more torn up and rutted than usual. Perhaps that breeds a little bit of extra caution. This weekend he came super close to a huge endo and then backed it down from there. In Oakland’s rut fest, he seemed to just accept a safe second. That leads credence to another theory….

#2. The Roczen crash rocked his world: Dungey was as respectful, apologetic, and sympathetic as anyone could possibly be after Roczen went down. That’s very classy. But how much did Kenny’s injury affect him? Has he been extra bit extra cautious since? Not impossible, especially since these difficult conditions are only maximized due to theory #3….

#3 Longer races lead to tougher tracks, and Dunge is being smart: The new timed race format eliminates the chance of short races, so Dungey—who is know for his fitness—should benefit. However, we’re not seeing fitness as a huge factor in these races. Track deterioration has been, though. Perhaps Dungey, as smart a racer as anyone, is seeing the risk versus reward ratio differently this year. Plus, if he has any struggles, they’re harder to fix because …

#4: California rain means less time to fix issues: By round seven, most riders have their bikes sorted (look at what Tomac and Monster Energy Kawasaki figured out between rounds three and four), but conditions definitely have made it tough out west this year. Dungey and his peers have mostly headed back to Florida by now, but no doubt January in California was a strange one. Perhaps everything is a little strange this year due to the strange weather.

#5: There’s an issue we won’t know about: Look, even someone as rock solid as Dungey could be dealing with a physical issue, be it injury or illness, and still show up at 90-percent and get the job done. Only a few years ago Ryan Villopoto was riding on one leg and still pulling away in points. RV was very reluctant to give up that information, though, even denying that knee surgery was going to keep him out of Lucas Oil Pro Motocross even when everyone knew it was (and it did). So if Dungey is struggling with anything, we’re not going to know. What is intriguing is that the rider ranked second in points, Musquin, is his teammate and training partner, so it would be basically impossible to keep anything secret there.

Finally, let me just remind you of theory #6.

#6: Nothing is wrong and it’s stupid to judge anything based on four races: This is a very fair point.

But anyway! People are still trying to take guesses, which leads us to analyze any clue we can find. Interviews are always a good window into the soul. Does Dungey seemed worried or scared at all? He does not. But Dungey doesn’t do worried or scared anymore, anyway, not even after Roczen threw down serious heat at the start of the year.

Plus, Ryan’s happy demeanor (outside of #ThereWasNoCrown) could be a byproduct of many things. I heard one person say it’s because he knows there’s an issue so he’s actually happy to get third. But I also know that some riders, when they feel confident in themselves, don’t get bummed. Chad Reed was a master at getting beaten, finishing on the podium, but saying and believing he would have won the race if not for one mistake. Dungey’s lack of worry could be due to an actual lack of worry.

Heavy lays the crown when you’re wearing it. Ryan Dungey has to race not only the current contenders, but also the very high standards he’s set over the past two seasons. Will this one end the same as the last two? That’s the real question that everyone wants to answer.