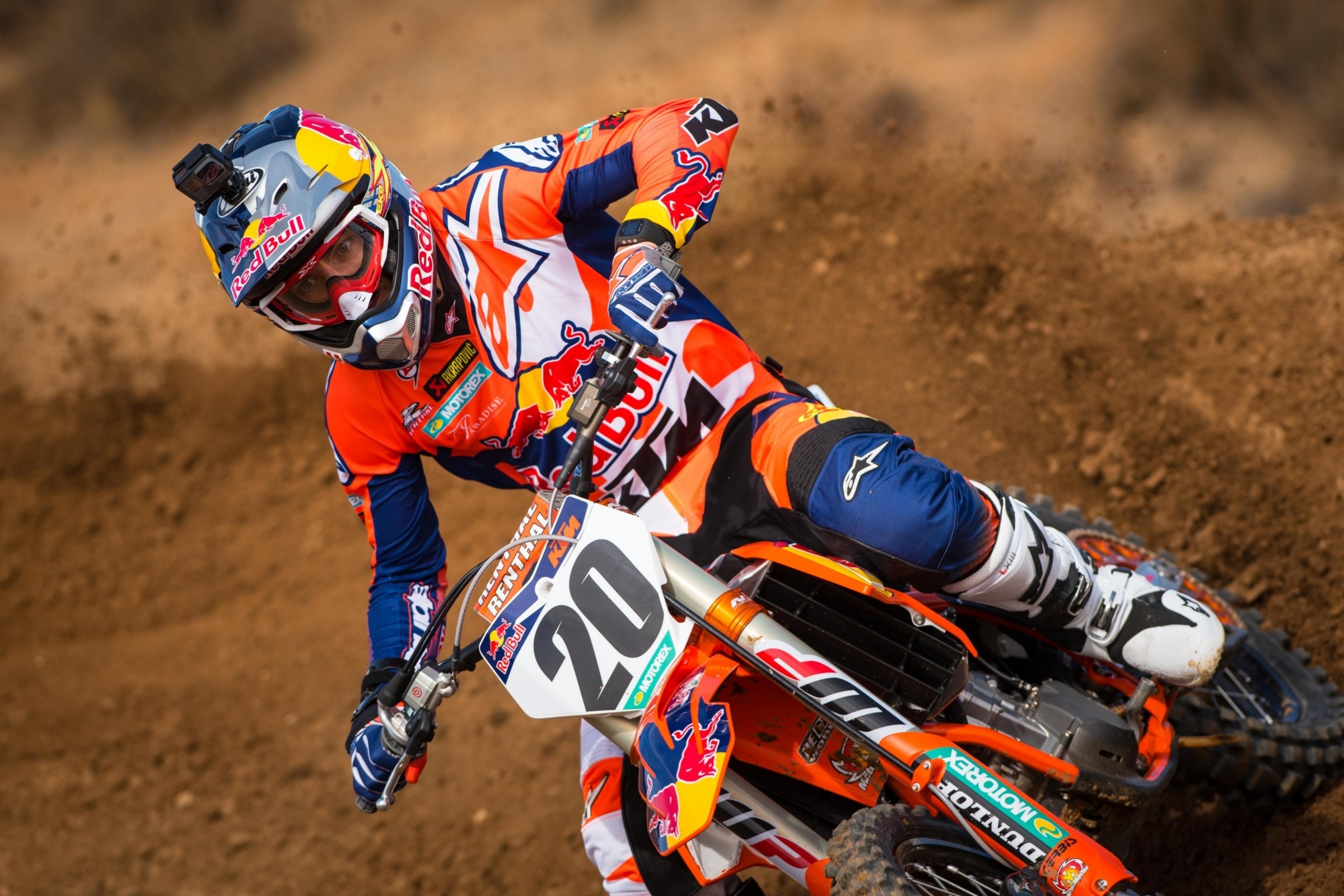 No excuses. It’s a term we’ve heard Broc Tickle use quite a bit since his switch to Red Bull KTM this off-season, as he’s equipped with the same bike/team/trainer combination that once belonged to Ryan Dungey. It’s also the same combination that delivered the last three Monster Energy Supercross Championships.

Tickle isn’t talking title, but he does expect to up his game this year. How’s he getting on with the program that once belonged to the champ? We caught up with the new Red Bull KTM rider at the KTM media intro last week.

Racer X: We’re here at the KTM intro for the new bike and for the team. How’s everything going?
Broc Tickle: Really good. I just flew in Saturday for this. Been in Florida the last month. It’s been going really well. The program down there has been really good to be part of. Definitely feel like I’ve made some improvements. Looking forward to being here a couple days and riding the new track here and head back there this week.

You’re normally based in California. Once you joined the team, you decided to make the jump to go over to the Baker’s Factory. How’s all that going over there?
It’s been going good. Like I said, I’ve been there for a month now. I feel like we’ve made improvements for sure. Obviously, riding with Marvin [Musquin] and Zach [Osborne], and I believe Jason [Anderson] is coming back after this week too, so heading into Anaheim I’ll be around the guys that are pretty much expected to win races. I think that’s just going to up me. Then I feel like during the week, it’s been good for me to ride with people that have been quite a bit faster than me pretty much every day. So, it’s keeping me on my feet. Obviously, I don’t want to be the slowest guy at the track. It’s been keeping me hungry and keeping me trying to get better each time we go out.

Have you noticed a huge improvement in your fitness yet?
I think it’s just the atmosphere. Obviously, we’re surrounded by me, myself, Marv, Zach, and Aldon. We all have a common goal. For myself, it’s podiums and top-fives. I feel like that’s realistic. With Marv, obviously winning races is going to be the goal, and Zach the same thing. With all of us working together, it just creates a good bond and pushes all of us each and every time we go out and ride. I think that part of it is good for us. Obviously, training. We’ve been putting in a lot of work, but from that I think just the atmosphere. It’s a positive atmosphere. It’s been really good to be a part of. Obviously, there’s some days where it’s been tough, but with that atmosphere it made it easier.

You guys have a new track out here. Have you gotten a chance to ride it yet?
No, I haven’t.

It’s pretty cool that you guys have access to this, being basically half a block away from the HQ. Are you planning on spending any more time here to do some testing?
No, I’m here for the two days for the launch and then our photoshoot tomorrow, then heading back to Florida. I’ll just be back here during the West Coast rounds to ride the track. It’s awesome to have a track so close to the shop. It makes it easier. I feel like we have a good track on our hands just because Randy Manenga built it and he does a lot of the races during the season. So, it’s just going to be the most realistic thing I think we’ve rode. I think it will be good practice and a good place to see where we’re at.

How do you like living in Florida?
It’s been really cool. I really enjoy the area down there. It’s pretty mellow. It’s not far from Orlando to get to the airport. Most of the flights here are direct. It’s been easy to adapt to, but I’m just stoked on the whole program in general. It’s been fun. I’ve been eager to make improvements and kind of put myself in the situation to where I have nothing to lose. Obviously, with this package deal, it’s surreal still. I’m going to take full advantage of it and do the best I can.

Is your wife over there with you, or are you just over there working on your own?
She came with. It’s been good. We’re just in an apartment, so it’s a little different adapting to that, but it’s a nice apartment complex. It’s right there close to the boys, so it’s easy in the morning to hook up and get the things done we need to.

It’s funny how everyone has kind of made the switch over to Florida. It almost feels like the old Lake Elsinore, 909 days over there now with so many top riders.
For sure. I think with the Nest and Kenny [Roczen] and Adam [Cianciarulo] and those guys, and then all of us, plus [Tyla] Rattray’s guys with the TLD boys, some of the Husky guys too. I believe Jordan Bailey and [Josh] Mosiman are also training with Rattray. So, those guys are all down there now too. So, there’s a good group of us that are down there. It’s been cool. When Marv goes over to Europe, I’ve been able to ride with the TLD guys and kind of do my own program but ride with them, so that way I had people on the track with me. We have three tracks down there, so each week we’ll ride one track, ride another one the next week. So, it’s been good practice getting used to each track and then riding with different guys also.

You guys are just kind of cycling through the different tracks and stuff?
Yeah, it took me a little bit to get adapted to the dirt there. Obviously, when you look at it, it’s like the best dirt you’ve ever rode. Riding it outdoors, I’ve rode dirt like that, but I’ve never rode dirt like that in supercross. So, it took a while for me to get used to it. The tracks have been tough to ride, and it’s been really good practice. We don’t really prep them too much, but it’s been good. I think it’s putting me in a good position to be the most ready I have been coming into Anaheim.

Obviously, things didn’t work out with the whole RCH team. They were able to make the announcement pretty early so that you guys could go and find other jobs. Is that helpful to you that they did that? Or did you already kind of have this in the works before that?
This was kind of in the works. After my podium, I made the call to Ian [Harrison] and met with Roger [DeCoster] and them later in the year, right around when outdoors started. That’s kind of when things got talked about. Then I was going to do it. I really knew this was a place for me to come and kind of go to the next level. Then with Aldon obviously involved with the KTM and Husky program, that was something that was in my mind that I can come here and try to make the best of it. I think that’s where I’m at. I’m thankful for this opportunity. Just going to take it for what it is and try my best. That’s all I can do.