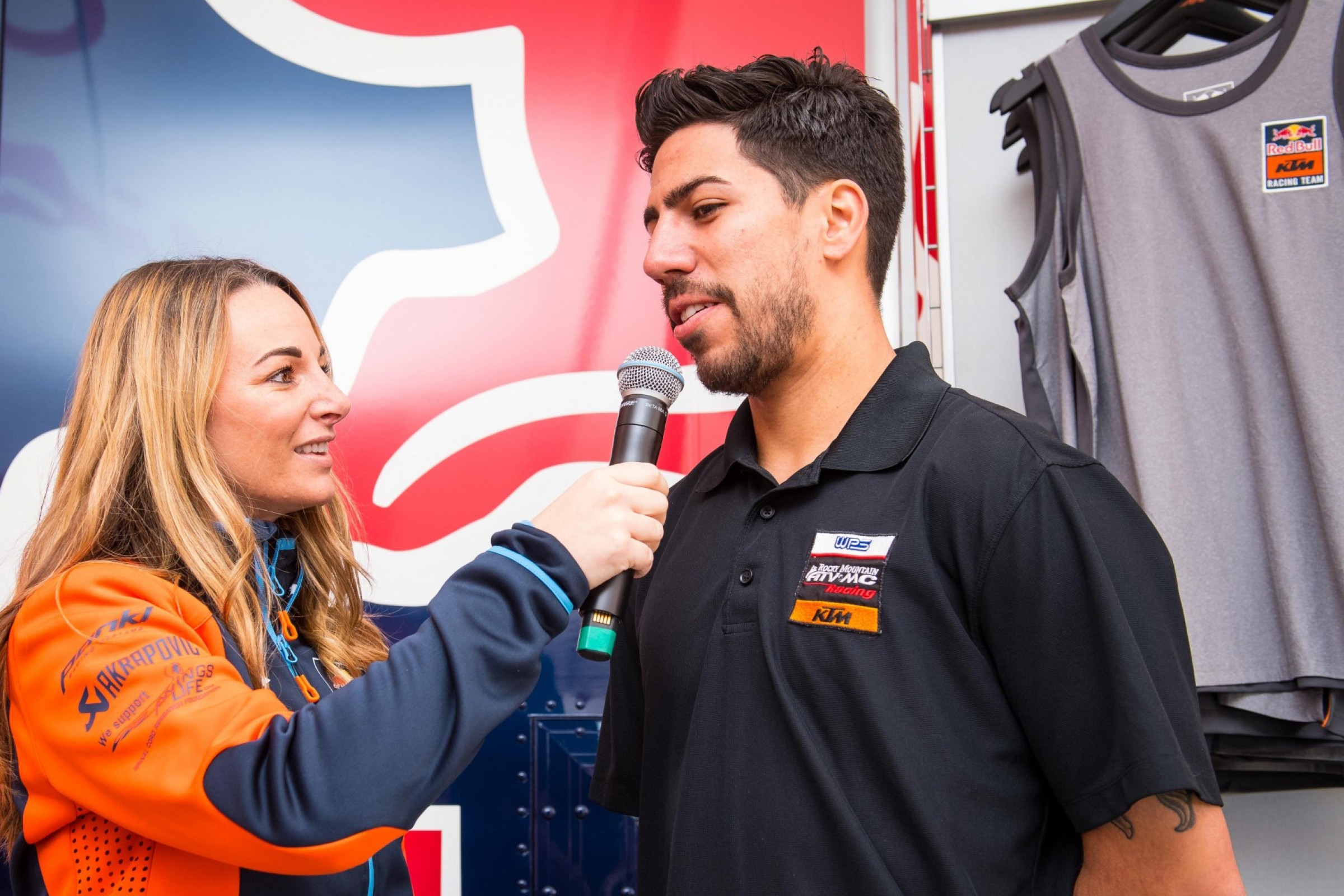 Anthony Rodriguez was almost done. Despite showing raw speed at each level of his career, crashes and injuries had left him out of a ride heading into 2017. As a privateer, he finished ninth in 250SX East Region in 2017, then the Venezuelan got a quick shot in MXGP last year and showed his old speed. He even showed up at the Budds Creek National on a 450, saying he’s spending “all of his money” to go racing. Then he crashed out in practice.

Speed is there. Can he get results with it? He’s got a new shot at it in 2018 with Rocky Mountain ATV/MC-WPS-KTM. We talked to him last week.

Racer X: We just got the official announcement of you joining the team. Congrats on the new gig. Can you kind of talk about how everything came together?
Anthony Rodriguez: Thanks a lot. To be honest, last year I did it all by myself, as privateer as it gets. Weekend warrior kind of stuff. I was loading my own bike, building it, putting it together. Didn’t test suspension-wise or anything. I was able to do some good races, show that I had the speed and stuff. Coming into this year, I knew I needed tools like what this team has to get to the next step. I started talking to them and everything came together. I’m super pumped on it. Looking forward to it. I know this is exactly what I needed. Now knowing that I’m on a good bike, being able to test, it’s got to take me to the next step.

It must be a relief to not have to put all that extra stress. It’s hard enough to be able to just ride. All the extra things that you have to do as a privateer…
Yeah, 100 percent. I’ll be able to go to the races and focus on racing only. For example, when I went to Toronto Supercross, I didn’t even know how I was going to get the bikes there. So here I am four days before finding out how I’m going to take the bike there, getting my own flights, hotel, signing up, everything. It was just a complete mess. Being able to do what I did with everything that I had to do, I was pretty proud of myself. So, I can just see that next year definitely is going to be a whole lot better.

So, how did this deal come together?
Well, I did pretty good in supercross when it comes to showing my potential. Then I went overseas for that MXGP for Honda. I was pretty much training in the gym only. I didn’t have a dirt bike. It was two months of not riding a dirt bike, and I went over there and rode for a week and I was able to come out with eighth place, but showing that I had the speed to be a top-five guy. I told the team and I told everybody I’m doing [it on] raw talent here. I haven’t been riding. And they were okay with that. I was able to show them that. I was in fourth place for 25 minutes. Then the next ten minutes I faded off. Nothing that I didn’t expect. I hadn’t been training. So, they knew my speed was there and that helped as well. So, I believe they saw that in me and they knew that if I had a program behind me, I could be the next thing.

You were with the Star team as an amateur rider [and as a professional]. You had a lot of bad luck, some ups and downs. Can you kind of just talk about how much of a struggle was that? Just having to rebuild over and over?
It’s definitely difficult. You’ve always heard it that making a comeback is harder than making it the first time. Well, I had to make the comeback without making it the first time. So, it was very difficult. My first year with Star, I struggled. I had podium speed, but I got injured right away. Then the second year was like my rookie year, and I was able to get sixth in the supercross championship, one point from fifth. So, I did pretty well. Then I went into outdoors and I got a fifth at Hangtown. The track was very technical. Then, unfortunately, I got injured at a public track where some dude just crossed side to side [entering the track]. Everything went just bad after that. Never really got on a good bike after then. Now here we are, building back up. It’s personal for me.

So you’re going to be doing the East Coast, right?
That’s correct as of now, yes.

Where are you based out of now? What’s your program like?
Still down at MTF [Millsaps Training Facility]. Ever since I moved to America in September 2009, I’ve been there living in a motor home. A few things are a little different now. Training, we changed a few things that are definitely going to make me a better rider. But I’m still there. Still the same spot that I moved in 2009. Still working as hard as I did then.

This has been a long road for you. You had to leave your family and you moved to MTF, correct?
Yeah, definitely. That’s the reason we went to MTF, because back then it was doable. Nowadays it’s not doable with the inflation the country is going through. Back then it was doable, and luckily I did it at the right moment. I had to leave my whole family behind. I was the 14-year-old doing laundry, cooking, learning everything by myself in a motor home. Colleen Millsaps helped me a lot in becoming a man. That’s the reason MTF was so beneficial for me and helpful for my family, because there was not a house I could come to. There was no family. There was nothing. It was just I came here to ride, train, sleep, eat. That’s it.

A lot of kids go to MTF, and, obviously, going to that training program is huge, but I could only imagine having to leave your entire country. You’re not visiting. It must be tough.
It wasn’t just like a vacation trip, like I see some people do sometimes. It was like the deal—this is an investment, we’ve got to make this work. It wasn’t like my parents were pushing me. It was me asking them. But how much of sacrifice they were doing for me? I learned to appreciate it by working hard for it. Not speaking the language was another thing that was very difficult.

What are you looking forward to for next year? Obviously with the team and everything.
Well, when you’re on a team like this and you’re on a bike like this, you definitely know you’ve got to get in some good results and stuff to show your potential. So, I’ve got some big goals for myself. I’m training for it.

What are those goals?
I’m definitely wanting to be a consistent top-five every weekend, and definitely be on the podium, knocking on the door.

How’s everything else going?
Everything else is going very good. I’ve been training on and off the bike pretty good. I just got to see my mom after two years of not seeing her. So, that was pretty good. My girlfriend actually got me that as a Christmas gift. She flew her over without me knowing. So, that’s pretty cool. Actually, she’s at my motor home at MTF waiting for me to come back. So, I was pretty pumped on that. Moving on forward [from there], I’m just looking forward for next year.

Are you going to be heading right back to MTF? Are you going to be doing any training here?
Yeah, I just flew in last night, actually, and I’m taking a red-eye today to get there tomorrow. Getting to training hard. I’m coming next weekend for a photoshoot we’ve got with the team, and then they’ll be testing the bike and stuff. I’ll be coming here in January, too, for suspension stuff. So, we’ve got a pretty stacked up program coming up. Everything is going to be moving pretty fast once we get the things going.

We do have a little extra time with the East Coast.
Yeah, completely. It’s not until almost the end of February, so we’ve got the time for it.