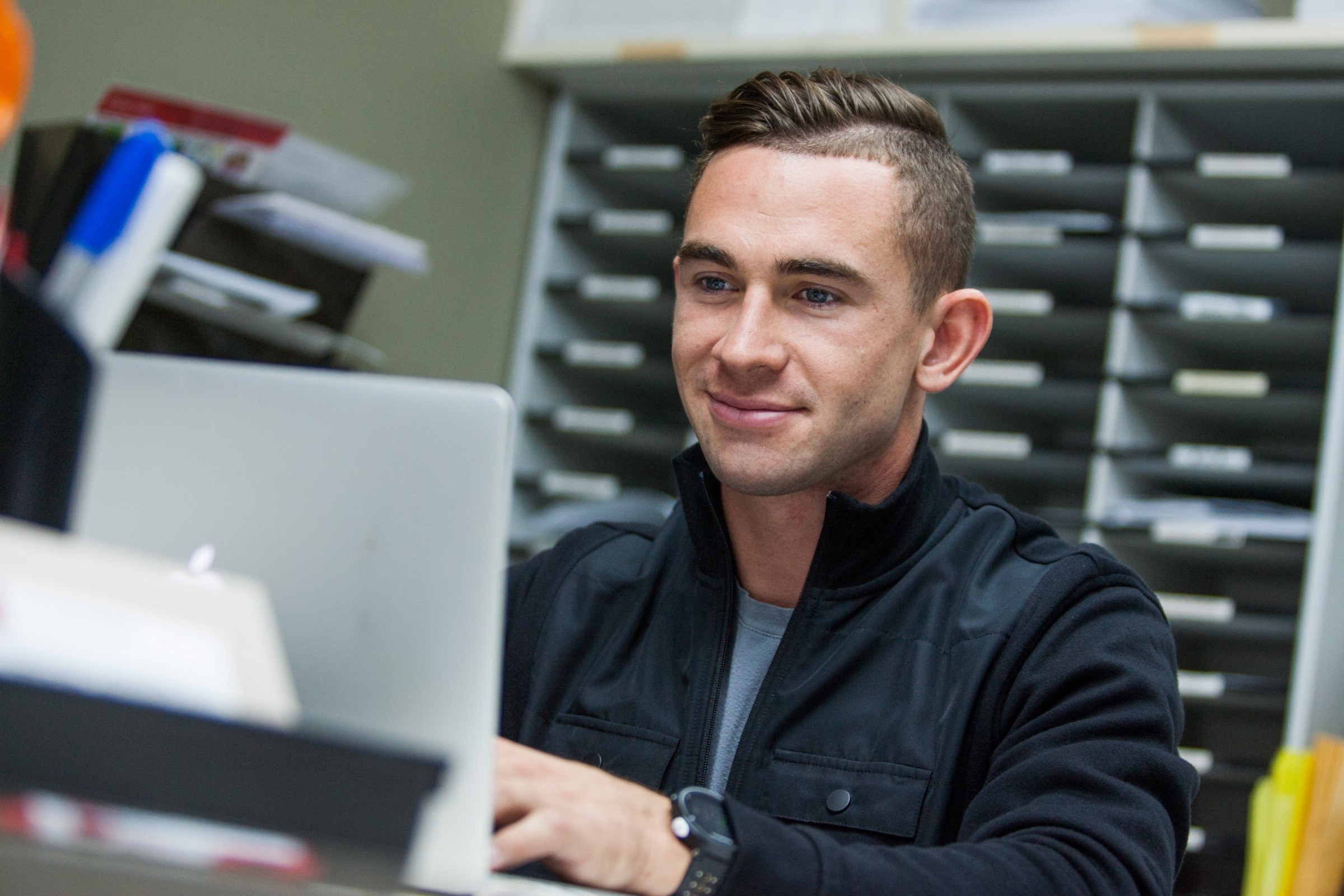 Nick Fratz-Orr doesn’t live in one of the motocross hotbeds spotted across the States; he doesn’t stay at a live-in training facility; in fact, motocross isn’t even his only full-time gig. But like most pro riders on the gate, it’s his passion for the sport that makes it all worthwhile. Growing up in Oakland, Maryland, Nick’s family wasn’t into the sport of motocross, his dad didn’t race and he didn’t have an uncle who was an ex-pro. He’s actually the only pro rider from Oakland, MD, listed in the Racer X Vault.

Back in 2000 his sister Lexi was in Ruby Memorial Hospital with a traumatic brain injury and for six months the family would make trips down to Morgantown, West Virginia, on a regular basis, passing Morgantown Powersports along the way.

“We kept begging my dad to let us stop in at this bike shop. Finally, one day, he took us inside and said ‘Ok boys, what one do you want? Blue or red?’ I wanted blue, and Derek [Nick’s brother] wanted red. Being that Derek is the older brother… we ended up getting red. We didn’t really know anything about it, and eventually figured out it was a Honda,” says Nick of that day when his dad bought them that first Honda XR50.

As you might expect, the backyard riding sessions turned into a passion, and the brothers started racing. They were all-in. Soon trips to Loretta Lynn’s and Mini Os ensued, and Nick started racing Lucas Oil Pro Motocross in 2014. Although he didn’t end up qualifying for the motos that first year, he was determined to keep at it.

Along with moving to the 450, Nick was also getting his feet wet in the business of real estate, where he’s a licensed sales agent at Railey Realty in McHenry, MD, where his sister and father both work. “After that first year as a pro I took it upon myself to get my real estate license and by May of 2015 I had it,” he says. “At first I didn’t really understand the business aspect of it like I do now. Then the next year I started to pick it up and did some sales and now this year I do real estate full-time while traveling along to the Nationals. My goal with getting into real estate was to set myself up for something to do after racing, I knew racing wasn’t going to be forever. I wanted to make sure I had an option after I walk away from racing.”

He’s got a Plan B, and a pretty good one. Nick was so busy with real estate that he originally thought he might sit out 2017 and be done with racing forever. After much back and forth in his mind—to race or not to race—two weeks before the High Point National he closed a couple of real estate deals and decided to buy some KTMs and give it a go. After checking around with some bike shops in the area he was able to get a deal on some bikes from Barnes Bros. Motorcycles in Canonsburg, Pennsylvania. He was set.

“I did better than I thought I’d do at High Point,” he says. “I had just got the bike, and with very limited training too. So I just told myself, Heck let’s go to Muddy Creek.” That was all it took to get back into it. Nick ended up traveling to nine races this summer.

“Southwick was an interesting one this year. On the drive up my dad and I were counting our phone calls as a game, to see who made the most,” says Nick. “I was really busy negotiating a few contracts for a closing on the very next day, Friday. Within the first three hours of the drive we were over 28 phone calls each. The phones were pinging left and right. By the time we got there we were exhausted. On Friday I had a closing that I coordinated everything for, on a 25-acre piece of land. But Saturday was the interesting day. After each practice session I was back in my truck making phone calls and texts and I was able to negotiate two different verbal contracts for real estate transactions.”

He ended up doing pretty well out on the track too, especially with his starts. “I was practicing my starts next to Marvin Musquin and we were both going good. I was staying with him on those. My dad and Marvin’s mechanic, Frankie [Latham] had a pretty funny exchange. Frank asked my dad what my bike had done to it, and it’s stock, except a pipe, so my dad said we didn’t have anything done to it. Then Frankie said ‘Yeah, we don’t do anything to our bikes either.’ My dad was cracking up!”

Along with racing and being a real estate agent, Nick also runs a video business where he creates videos, mostly with drone shots, that show external features of homes for his listings and other agents’ listings. How does he juggle so many things, and still train for racing, and also stay sane?

“It’s not easy,” he says. “Creativity is kind of the escape from the physical and mental stress of both racing and being a real estate agent. Also working on the bikes.”

Nick has spent many hours in the Eleven-10 Mods shop with Chad Sanner, working on his own bikes in years past. He does all his bike work himself, everything above the transmission. “I spent a lot of time around those guys learning. I do all the bike work myself, from stripping the bike down, bearings, top ends, basically everything except transmission work or anything else below the piston. Growing up and spending time around those guys is definitely why I can do my own bike work. And also so I know exactly what’s been done to the bike. If I know how to do it, I’m not going to pay someone else to do it for me.”

What keeps him motivated to keep racing? “You don’t have to do the same thing everyone else does,” he says. “It’s easy to get caught in the rat race. I love racing motocross, I’m so passionate about it. Heck, I’ve broken half the bones in my body but still love it. Spending my money buying bikes, paying to go to the races, I wouldn’t be doing this if I wasn’t passionate about it. If there’s anything I could tell young kids coming up it would be to just enjoy it, take your time. It’s easy to hate it, a lot of racers do at times, but staying positive is key especially when you’re injured.”

He also has a great support system. Nick, his dad Rich, and friend Bill Mayle all traveled together to the races this summer. The only exception was for Washougal. Nick bought plane tickets for himself and his dad, and had his bike shipped with Ted Parks’ The Professional Journey transportation service. It was the trip of a lifetime, and his first time being west of Minnesota. Even though he didn’t make the cut for the National in qualifying, he has no regrets. “Oh well, it was still awesome being out there and seeing all those evergreen trees,” he says. “It was amazing.”

This year was Nick’s best season too. He was able to qualify for seven of the nine Nationals he entered, with a top overall finish of 26th at Unadilla. Not bad for at one point thinking he was never going to race again.