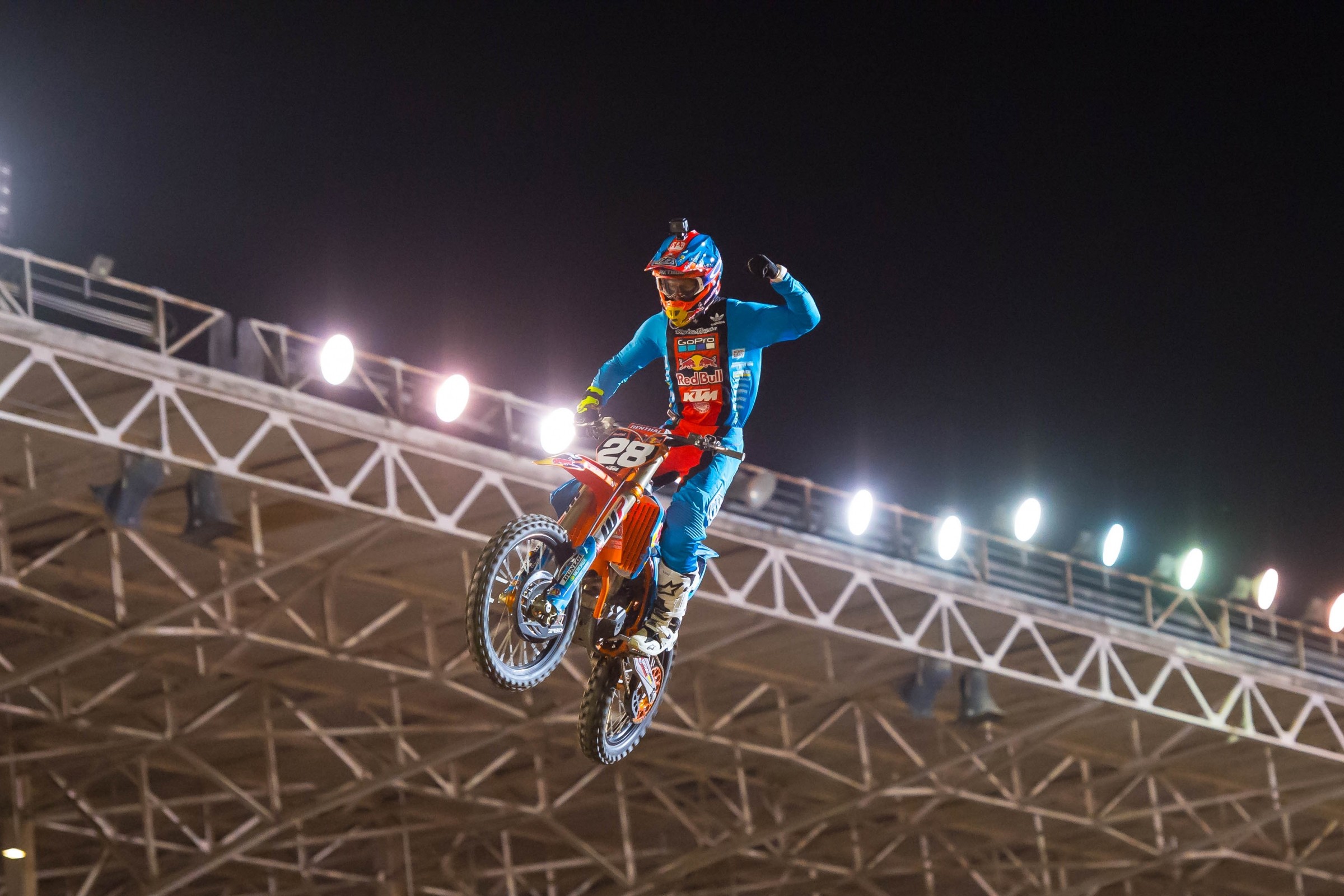 Red Bull Straight Rhythm is a fun off-season race, but the victory was significant for Shane McElrath, because it was the friendly North Carolinian’s first race back since a hand injury he suffered at the Budds Creek National in August when he couldn’t pop the lid off of the champagne bottle on the podium, and tried to break it off, only for the bottle to explode and ruin his hand.

There were some tense moments after. The victory on Saturday shows the Troy Lee Designs/Red Bull KTM man is back on the contender’s list in 250SX.

Did you uncork it?
I did not.

You had someone do it?
No, they were already taken off. I inspected the bottle and I slowly jumped off the podium making sure I held it firmly. Then I went and found my mechanic then I shook it up and started spraying.

You had assistance. You had your mechanic with you?
No, I made sure I sprayed him. He was a little ways away, so I didn’t want to waste it all.

This is your first race back from the champagne incident.
Yeah.

How much riding have you actually done?
I’ve been on the bike about a week and a half.

Feel weird at all?
No, I actually feel really good, other than I feel like I haven’t ridden in two months. Not like my timing or technique or anything is off, it’s just my body is really having to kind of get back in shape. Riding shape, I guess you’d call it. That’s the only thing. I took the other day off just to let my hands heal up because I’ve had a blister for a week and a half. Just looking forward to the next two months to get ready for Anaheim 1. We got plenty of time but we’ve also got some work to do, so I’m excited.

People are going to say this is a random straight, off-race. But you did win here last year, and you did do really well in supercross. Is there some connection? Is there some payoff?
This is a fun event but we don’t come here and just kind of write it off. We come here and race serious and work on whatever we can work on here to take over to the supercross track. I still hate to lose. Winning still feels good. I’m going to use that and take things that I’ve learned here to go to the supercross track, whether it’s bike setup or technique something or whatever.

You said something interesting on the podium about this race. You said you needed to get angry, like psych yourself up. Last year you were on the ropes, it looked like you were going to be eliminated, and then all of a sudden you just found intensity and went on to win the event. Talk about that.
That’s the tough part for me. I’m here racing motorcycles with my buddies, but at the same time I don’t want them to beat me. I lost two races, so I kind of had to focus afterwards because I’m like, “Dude, that wasn’t me.” So focus, get a little angry. He’s still your buddy, but I don’t want him to beat me.

So the fact that it’s teammates did mess it up a little bit?
Yes and no. It doesn’t really matter. It’s still 40 seconds of intensity and trying to be mistake free. That’s really a big thing. But Alex [Martin] and Sean [Cantrell] both were really on it. This track was a little different than last year just in the sense I felt there were kind of some bigger rhythms. I guess less pumping, which made for a lot closer racing which is what this event is about. From a rider’s perspective, it’s really tough because, I’ve said it a few times today, you can have a really good run and lose. So, that’s the tough part. Not only can you not make a mistake, but you’ve got to kind of ride over your head just to find that extra wheel length or knobby as they say.

In the final race, you got the big quad. It was tough to be clean, anybody, any bike the whole time, and you got it. How often were you getting it?
Not consistent enough. If that would have been a supercross main I probably would have lost the race right there. That’s the jump all day I just wasn’t a big fan of. It’s cool and it’s big, but that rhythm is what made the race in a lot of different races. I guess it could go either way. When you win it’s cool, when you lose it sucks. It was a cool jump because it’s like I jumped two quads in a row, but at the same time it’s really technical.

Is it a coincidence that you got it in that last one? You just happened to get it right? Or was like, it’s all on the line, I’ve got to uncork this?
No, I knew I could do it. I’ve done it throughout the day. I even told my mechanic after the first round, I didn’t jump it but I still had good times. I was like, I’m not even going to worry about the quad. I was like, I can just push through it and still have good times. But then Alex beat me the first round because he jumped the quads. I’m like, “Dude, I’ve got to jump this stupid jump.” [Laughs] It was fun, but it’s just the patience and everything that goes into it. You kind of have to check up over the first quad. It just was one of those things where then I figured out exactly how to hit it, but still it’s one of those things you don’t know if you’re going to make the second quad until you’re in the air on the first one.

So, it’s full last-second decision.
You are kind of on the landing as you’re coming down and you’re like, all right, I can go for it. And then you’re up.

Okay, so let’s go back to Budds Creek. What all happened there?
The champagne bottle wouldn’t pop off, wouldn’t twist off. I kept shaking. Still wouldn’t come off. I tried sliding it on the podium a couple times. Still wouldn't come off. Then I hit the neck of it when I was trying to slide it and the whole bottle just exploded, because it was shaken up. It didn’t just break the neck off. The whole bottle just disintegrated in my hands. Kind of a freak thing. I don’t know what to say about it other than, Shane, you’re an idiot.

[Laughs] Did you know immediately?
I looked down and I could see some of the cuts and I’m like, this ain’t good!

It was pretty serious? It wasn’t just cuts? You had some nerve damage?
Yeah. Technically I had surgery in the Alpinestars rig. They sewed up my artery, my nerve. They cauterized it and sewed me back up. Then a few days later when I got back to Florida I went to a hand specialist and I decided to go in and do surgery. It might have healed if we hadn’t done that, but just more of a piece of mind thing. It was pretty damaged when we got in there. So they cut out about a centimeter of my nerve that was all damaged and put a cadaver in and sewed it up with the right size stitching, because Alpinestars didn’t have small enough. So they kind of just made it work, which was cool on their part. But it’s kind of been a process.

Was there any fear that your riding might suffer, long term, because of the nerve damage?
It was really sore for a while. I still don’t have any feeling on the right side of my finger, my index finger, so I can’t use that finger to pick things up. I have to use my middle finger. It kind of worried me because I knew that was my clutch finger and I use my clutch quite a bit. Just something that I always thought about. I was Like, “Man, I don’t know how it’s going to be.” And then I went and rode outdoors the first day and just tried to forget about it and just do what I knew how to do and kind of go back to muscle memory.

So it hasn’t been a problem?
Other than it getting tired the first few days of riding, it hasn’t been a problem. After the first day, I would come off the track and my nerve was so tired or something. I’d hold my hand straight and my finger was just wiggling back and forth. I could stop it and hold it with my other hand, and it would stop, but if I let it go and it was just wiggling all on its own. It was weird.

You thought about it? Did that scare you?
It was kind of serious. I tried not to think about it too much because I was like, I don’t want it to start going the wrong way. But it was something like, man, I don’t really know what it’s going to be like when I start back riding.

So then this is pretty big to win this.
This is good. I like this. Good way to get back going.

You had a really good supercross season last year, you won three races. That feels like so long ago that maybe people have forgotten. Then the outdoor season didn’t start off so well. Just when you get it back together at Budds Creek, you hurt yourself!
Yeah it does seem like a long time ago now, and I had that really slow start outdoors and it was frustrating. I was just … searching. We were trying everything, thinking about everything and it just wasn’t working out. Had some better starts and some better races, but Budds Creek was really good. I led a lot of that second moto, and even when they got me I stayed really close with Zach [Osborne] and Adam [Cianciarulo]. They were right there, so that was good, got some confidence out of that one.

And then you messed it up?
[Laughs] Pretty much, yeah!