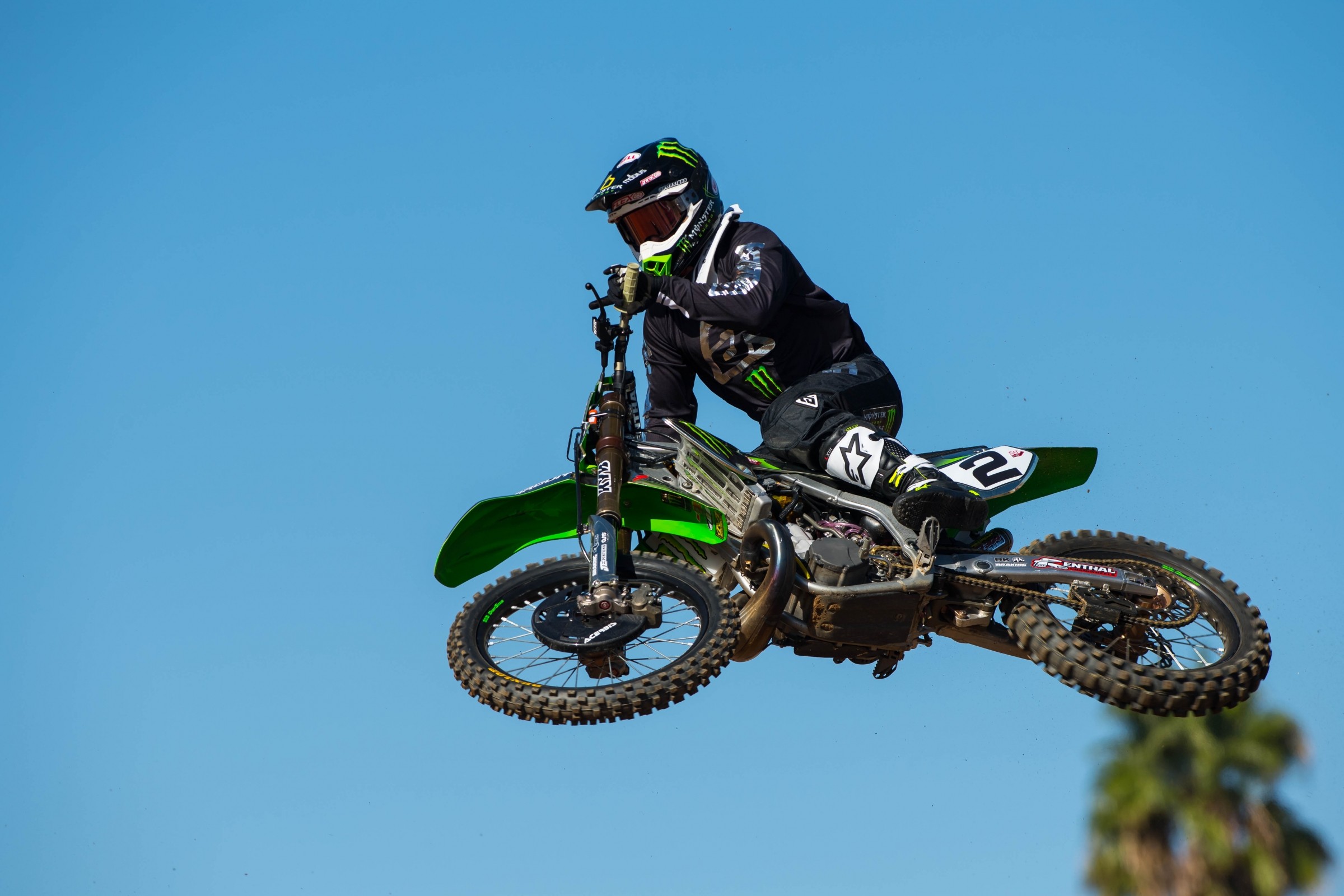 This past weekend at the Red Bull Straight Rhythm, retired multi-time motocross and supercross champion Ryan Villopoto came back out for a race on a Kawasaki KX250 and debuted his new Answer Racing threads. He didn’t win the event but trust me, he had a lot of fun racing. I caught up to him after his defeat to the infamous Ronnie Mac to talk about his showing up.

Racer X: Not the ending you wanted, but in the end did you have fun?
Ryan Villopoto: It’s the ending I wanted. I’m walking, I’m good, I’m healthy. I’m having a cold one. Obviously I want to win. It was good. It’s a bike I’ve never raced. I had not even an hour on it at the test track just trying to feel it out.

How long since you’ve been racing a two-stroke?
Probably ’03, ’04 for me. And I never raced supercross on one, just outdoors as an amateur. Mitch [Payton] was able to work on it and put all the pieces together. If it wasn’t for him, I wouldn’t be able to race this.

I was talking to Alex Martin earlier and he said even though they were doing a bunch of runs he still kind of got confused about the track a little bit here and there.
That’s the thing—I don’t race supercross anymore. I was good, but not good enough. I made a mistake in that rhythm section twice. But it’s a long section. Normally we only have a couple combinations, like a double, triple, double, single or something. This was 41 seconds of straight rhythm.

I talked to Chad [Reed] about his two-stroke. Nothing against the bike, it’s just what you’re not used to racing them but they’re kind of slow.
They’re not kind of slow. They’re really slow, really slow. That’s what this race was going to come down, how to win it. It was going to be who didn’t make a mistake. [Ryan] Sipes was jumping that quad. He had a couple huge close ones. He cased it really hard one time. As for all of us like myself and Ronnie and everyone else, we kept to the same rhythm section. It was close. I think even that last one, again Sipes he quadded and I was able to stay pretty damn close to him.

This is a perfect event for a guy like you, or any retired guy, right? It’s fun. It’s not a whole lot of work.
The work side of it, for me personally wasn’t a ton, but somebody said, it’s easy. I said, yeah, but it’s still a form of supercross. It’s still scrubbing. A mistake could cause you to crash. How bad? You don’t know, but any time you hit the ground isn’t good.

Feel like the bike was jetted okay or did you need my help?
No, it was spot on. Mitch had that thing just barking.

New look for you with Answer. It was just announced. We’ve seen you in Thor forever. Talk about this and how excited you are.
The Answer deal came up a little while ago. It was a big thing to swallow. It was like breaking up with your girlfriend of a long time, if you really want to put it, like a 15-year girlfriend. So it was a pretty big deal. I’m still super close with the guys over at Thor, Hylton [Beattie] and Jeff [Fox] and everybody. But business-wise for me, I was looking to keep things going and stay really active and do events like this and do some custom things here and there. So business-wise it made sense for me to go down that road. First thing I did though was call the guys at Thor and give them a big heads up and talk about it and go over it with them, just because the relationship has been so long. They’re treated me really, really, really well over the years. But overall I’m stoked. It’s a new look. It’s like a new girlfriend. It’s still shiny and new and fun. Looking forward to doing more.

You’ve got your RV2 Cup coming up New Year’s Eve. What’s the outlook on that?
It’s going well. It’s looking good. I think it’s an awesome time of year, like I’ve said before. Right before Anaheim 1. Cobra’s got quite a few bikes rented out. A couple other people, Euros come in, Australians come in. So I think the event is going to go off really well and be pretty big. That’s our goal. As everybody knows, you can’t hit a home run your first go at it. Obviously, we’d all love to. If it happens then great, but we know the event is going to grow over time. Our goal is just to have a really good event and an event that people want to come back to.

I think that was really exciting. I think people really dug all the crap talk, honestly.
I haven’t checked Instagram followers lately today, but I went up since Thursday to yesterday or today it was like three or four thousand alone.

Does it bug you that you got beat by a guy on a ’98 CR that pounds PBR’s and went farther than you in this thing?
No, it doesn’t bug me. Do you question more brain cells or less? I don’t know. Ronnie’s got nothing going on upstairs.