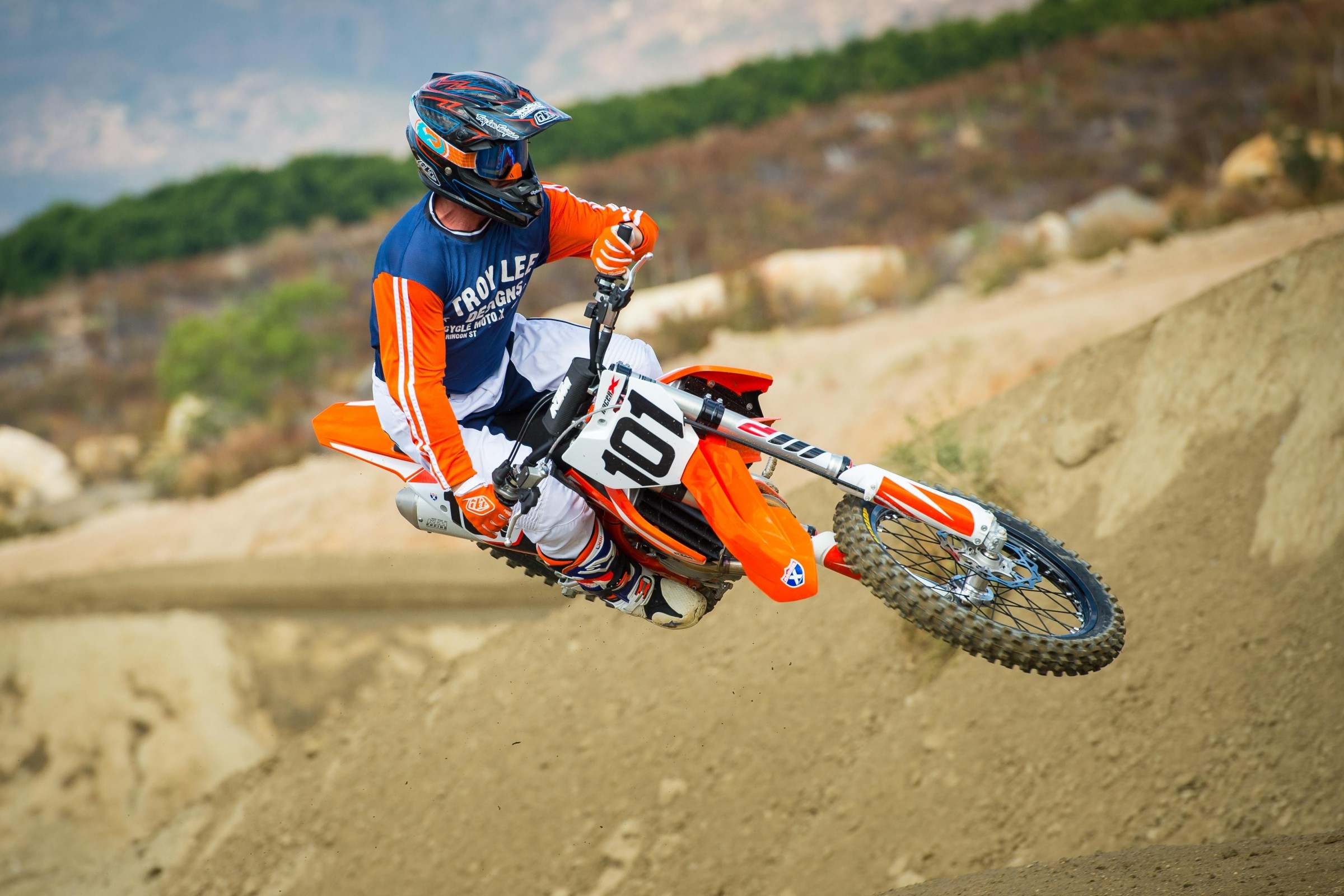 With all the crazy stuff that has been going on as of late, hurricanes, not standing for the National Anthem, taking statues down, and that lunatic taking the lives of many in Vegas, I feel compelled in asking why our top riders opt out of racing the MXDN. I know if I had that kind of talent and opportunity I'd be the first to stand up with both hands in the air to go and represent the U.S. I know Monster Cup is around the corner and schedules are tight blah, blah, blah, but not very long ago it was an honor to be part of the American team. I'm a little worried now with this gut feeling that maybe our guys are a little spooked getting their butts kicked by the Euros. Roger didn't seem too excited about next year either and it makes me wonder what's going to happen with the red, white and blue in upcoming MXDN races. What’s your take on this?

You skim right over the blah, blah, blah part like it’s not a big deal, but that’s the part that you don’t understand. There are quite a few things at work when it comes to this topic so I’ll break them down and give you my thoughts. First, American riders have become supercross specialists. We spend eight months of the year focusing on stadium racing and then quickly switch over and race motocross for three months because it’s in our contracts. GP riders focus on motocross all year long and they work hard to improve their craft. That isn’t to say our best riders aren’t capable of winning anymore, but GP racers have closed whatever speed/technique gap we had. This makes it much more difficult to win. Even when we sent our best riders to Germany a couple years ago—Tomac, Dungey, Barcia—we didn’t win. Add to that the fickle nature of motocross fans who will blast you for turning down an offer to go and then turn around and blast the riders who did answer the call if they don’t perform up to their standards. It’s absurd.

Additionally, the U.S. team has lost its esprit de corps over the years. The riders pit in different areas, the team manager spends more time in the KTM truck than working with the U.S. riders, and it’s every man for himself instead of a team effort. Those facts, combined with the losses, have crushed morale and enthusiasm for the event over the last decade. If you want to see how it should be done, see the American effort in the 1980s and 1990s, or take a look at the French team—those guys are thick as thieves all weekend long.

And then, on top of it all, is the pragmatic consideration. National pride and peer pressure aside, it isn’t in a U.S. rider’s best interest to commit to the MXoN the way it is currently scheduled. Cole Seely put off a surgery that he needed for a month to go this year. That means his prep for 2018 is now four weeks behind, his confidence was rattled, and fans are smashing him for not winning. Even without the surgery, Cole gave up the only few weeks these racers have to rest all year. Thomas Covington, a 250 GP winner, was pushed to a 450 for the event and he tore his ACL in the process. That doesn’t help his cause for 2018. Riders have a short window for success in this sport and they get paid to win races from January to September. Any race, and I mean any, outside of that time frame is unnecessary and ultimately a distraction for them. I don’t say that flippantly; I’m as proud of an American as anyone. But providing for your family has to be the priority and I understand completely when these guys turn it down.

The fix is two parts. First, move the event up a month. It needs to be scheduled the first available weekend after the last National and GP. The 2018 race at RedBud is five weeks after Indiana and that is absolutely unacceptable for American riders. Also, the U.S. team needs to reevaluate our entire effort. From the top down, it might be time for some new folks to step in and take the reins. Hopefully 2018 is the year we turn it around and hopefully the promoters realize the best American riders will continue to stay home until they schedule the race at a more convenient time.

Look forward to reading your column every Friday. I also really enjoy the garage builds you put together. It’s really cool to see a pro rider appreciate the process of building a bike and all the work that goes into it. Not to say factory riders don’t appreciate what their mechanics/teams do for them, but to see pros build their own bikes at home for the love of spinning some T-handles is pretty sweet and something I relate to closely. Maybe you and Chad Reed should have a bike build-off… Anyways, here’s my question. As someone who has gotten to race on factory suspension, and as a test rider who rides the newest bikes every year and dials in stock suspension, how amazing is factory suspension and how much of an advantage is it? I’ve been racing locally since I could walk and have had suspension revalved for my weight/ability over the years, but I have always wondered, as many other guys, what it would be like to spin a few laps on some factory stuff…

Thanks for reading and supporting the Garage Build projects. It’s definitely a labor of love and something I’ve learned to appreciate later in life. The problem with going head-to-head with Reedy is he has a cache of factory stuff I can’t compete with. His YZ250 is literally a factory bike. It’s beautiful. And a big part of that is the works suspension he bolted to it. The difference, to answer your question, is like buying a steak at Wal-Mart versus buying a steak at Morton’s. Sure, they are both beef but one you can cut with a fork and the other one requires a machete and tastes like a sweaty work boot. Factory suspension has internals that are machined more precisely, expensive coatings, and the very best in the business working with the rider to find the perfect setting. And the setup is the critical part. I’ve ridden other rider’s bikes with factory suspension and it doesn’t feel that great when it isn’t set up for you. When it’s right, however, it is absolutely an unfair advantage. It can feel stiff initially but the harder you ride it the better it works. Bumps that would normally cause you to tighten up lap after lap become an afterthought. It’s a significant difference. With stock bikes producing an abundance of power these days, the suspension is where the performance is really gained and factory stuff is amazing.

I’ve been a fan since I first watched you getting roosted on Al Borda’s Skin Industries’ Whipped video. The young ones out there need to look that one up for a view of what late 90’s shenanigans were about.

Speaking of young ones, what will it take to get these racers of today to stop the habit of starting every sentence with, “yeah, no?” I was listening to the PulpMx show interview with a new factory KTM rider the other day and every answer he gave to Matthes’ questions began with “yeah, no!” Eff me, dude! I was literally yelling at my Bose! I’m not picking on that particular racer because it seems that the majority of these millennials employ the same colloquialism.

Will the factory teams, Monster Energy Supercross or Lucas Oil Pro Motocross provide media coaches, or are we witnessing the prelude to the Idiocracy vernacular?

Yeah, no, I totally get it. Some teams and Feld have begun to address the issue in recent years. KTM does a media training session for its Orange Brigade amateur riders hosted by our own Jason Weigandt and Feld hired a media trainer last year to work with riders. Suzuki used to put on a good class for all their riders and hire actors to help drive home the point. The last one I attended was hosted by Stephen Baldwin and I still remember what he taught us that day. He may not have won an Oscar for Bio-Dome but, dammit, the man deserves one. For a few hundred dollars these teams could get somebody to come in and spend a day with their riders working on interview techniques and what to say/not say. Smile and be personable? Absolutely. Rattle off sponsor list and never answer the question you were asked? Please, no. Or maybe we just give in to the troglodytic masses and drink the Brawndo, as it were. It does, after all, contain electrolytes.