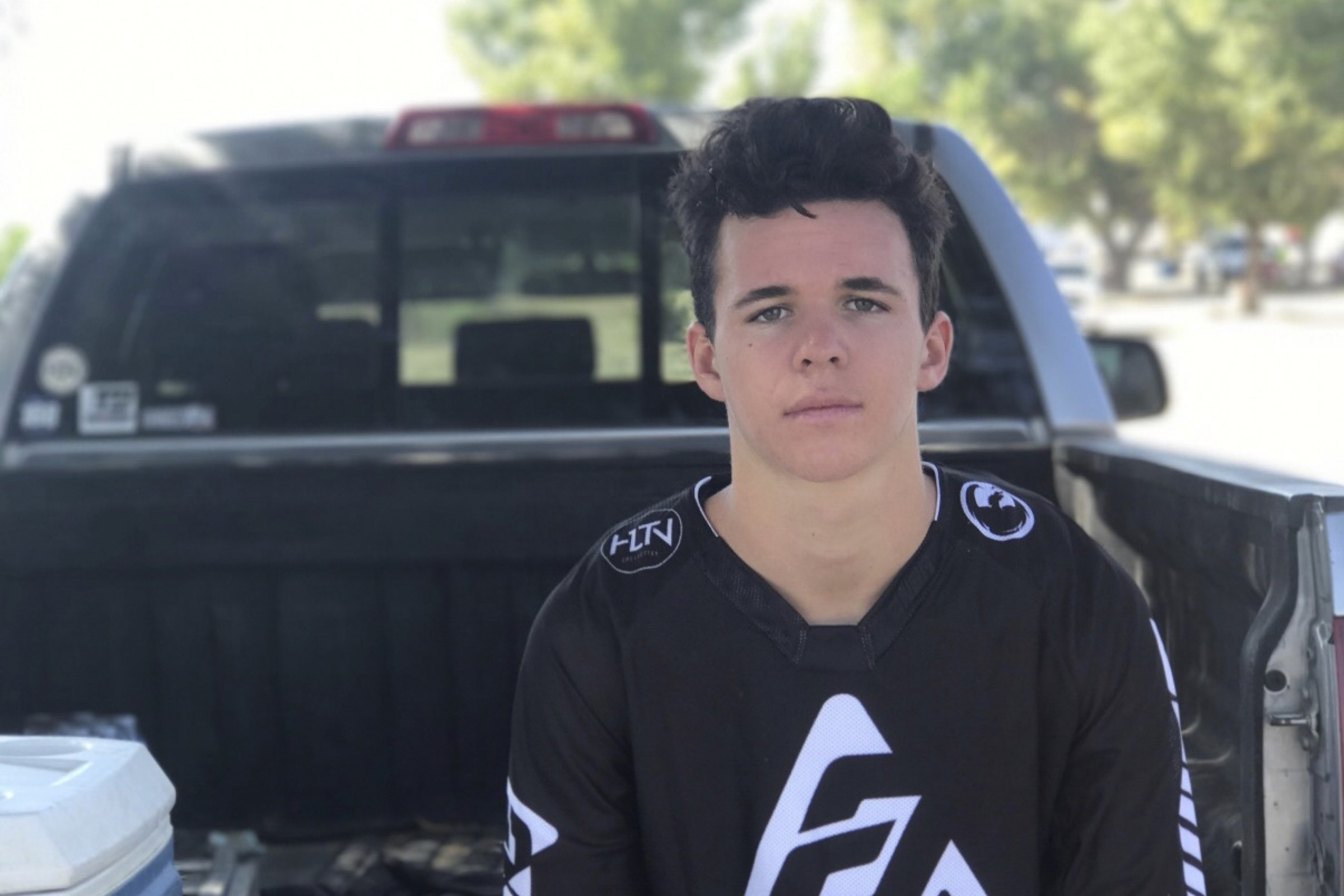 Growing up in San Clemente, Gage Schehr was the typical California kid, spending his days skateboarding and surfing—with the occasional trip to the motocross track mixed in. Around the age of 10, Schehr dedicated himself full-time to motocross and made his debut at Loretta’s in 2013 in the Mini Sr. (12-14) Class. In 2016, he moved up to the B Class with hopes of racing his final year of amateurs in 2017 and then making his pro debut at Anaheim 1 in 2018. But a kidney infection cost him nearly his entire 2017 season and now Schehr is contemplating another year in amateurs or perhaps forging ahead with his supercross plans.

Something unique about Schehr’s situation is that his parents own and operate the Grindstone Compound in Southern California, which, according to their website, “provides riders with essential needs and services to focus on their riding career.” His mom, Cari, is the head fitness trainer at the facility and has worked with Gage his entire amateur career. His dad, Brain, serves as the mechanic and machinist.

We recently caught up with Gage to learn more about him and the Grindstone Compound.

Racer X: Hey Gage, can you give us a little background about yourself for the people that don’t know you?
Gage Schehr: My name is Gage Schehr. I grew up in San Clemente, California, by the beach. I started riding when I was a little younger, about four years old. I actually used to be super into skateboarding and I didn’t get into moto until I was 10. And then it kind of took off from there.

What happened with the kidney? Was it from a crash or was it just a random thing that happened? How did that come about?
No, I think it developed from overtraining and not putting enough right stuff in my body. We got it figured out now, which is the only good part. So, I missed Loretta’s due to issues with that and a hand issue. So, I actually decided it wasn’t going to be the smart decision to go [to Loretta’s]. I want to go and try to win. So, right now I’m just going to get healthy again and get back on target.

I see that you’re training with Ty Kady and Josh Grant now.
Yeah. I’ve been working with Ty for a while now. I think since March or so. Grant and I get to work together sometimes. Obviously he has a busy schedule, but when he can get over we get some time in together. But even the little stuff he tells me goes a long way [helps].

Does Josh ride with you sometimes?
Yeah. It is hard with his schedule, but sometimes when I’m doing motos he’ll come out and watch my riding. Even the little stuff he says goes a long way. He knows a lot.

What’s it like training with those guys?
It’s kind of a dream come true. When I was little obviously I looked up to guys like that, and [it’s cool] to be able to kick it and be part of the whole HLTN crew with Josh and the whole Grant family.

Your parents own the Grindstone compound, right?
Yeah. So, my parents own Grindstone out in Murrieta. Just bought it probably about five years ago. It’s pretty hectic, but it’s cool. It definitely was a smart decision for all of us. It kind of brought me out to the scene of moto out here. My mom and my dad are the whole reason why I’m here today. Yes, Ty is a big part of my program, but my mom’s actually not completely out of it. She still helps me a lot. She’s a big asset to my program. I’m where I am today because of my mom. So, we’re just going to keep adding on to what I am doing now, so hopefully with Ty’s help, my mom’s help, a little bit of Josh’s help, I can just become what I want to be.

Yes, it’s my understanding that Ty Kady isn’t a replacement trainer from your mom, but more of a supplemental trainer to add on what you’re already doing with your mom?
No, not a replacement at all. That’s actually the cool thing. He didn’t want to take over completely. He saw my mom being a good asset and she did a lot of helpful things. Obviously, they would train with me. I didn’t have a trainer my whole life. Maybe a little bit, but she’s been the person I trained with my entire life. Obviously, adding stuff in there, but this is where my mom had gotten me. She’s my mom so I don’t want to completely exit her out of my program at all. So I wanted to keep her in because she has some valuable stuff.

How many guys do you guys have at Grindstone typically?
It obviously varies throughout the year. Some times are slow. But when the nationals are coming and A1, we get a lot of guys. Definitely crazy. It’s overwhelming sometimes. You get like 20 kids in there and they all come up for breakfast and dinner at night at the house. They live in the barn, but when they come up to the house you have 20 kids in your house every morning and every night. It gets a little crazy.

Who do you mostly train with right now at Grindstone when you are there?
To be honest, I don’t train with many people. I usually train with Deegan Von Lossberg. He’s my good buddy. So, I train with him, but with Ty obviously I’m by myself and sometimes Josh will pop in and get some motos and training in. But for the most part I train with Deegan. We obviously have a variety of kids that come around, that come in and out and I’ll ride with them once in a while. It’s a cool mixture.

I’ve heard that you also like to surf and skate, in addition to moto.
Yeah, like I said, I grew up in the beach town so I liked moto, but I didn’t know really what it was about. I didn’t know what it was about until I was like 12 years old. I just kind of rode and did it because I loved it and I liked riding a dirt bike. I actually love skating. It was what I wanted to do. Actually my brother was the one that wanted to pursue motocross. I was the kid that was just going to contests and skating. Then one day my parents made the decision, saying, “You’ve got to pick. You can’t go to both.” It was kind of difficult. I guess I picked moto. But I think it was a good decision. Obviously skating is a little bit cheaper, maybe a little cooler.

Where did your nickname “Geezy” come from?
When I was younger, me and my brother … my name is Gage obviously, and it starts with a G. He was like, I’m going to call you Little G. [I was] Probably eight years old. Then all of a sudden it became Little Geezy, and then I always had—since I was 10 years old—Little Geezy on the back of my helmet. Then I graduated from Little Geezy and just went to Geez, and now it’s Geezy.

You’ve gotten your points in arenacross so that you can turn pro now. Where are you with that right now?
Where I am with that whole thing—I don’t know right now. Right now I’ve been working and doing what I can to prepare for either if I stay another year in amateurs if I have to or do Anaheim 1. I’m going to prepare for both as best as I can. I’m looking obviously to get some support, a ride. I don’t want to go in empty-handed. We actually don’t know what we’re doing quite yet, but that is the main goal, get into A1. If that doesn’t happen, then we’ll think about the next step.

If you don’t line up for A1, do you think that maybe you’ll make your pro debut at the outdoor nationals?
Yeah, either make my debut at the Nationals or do amateurs another year. Try to get my name out there. Like I said, the sickness and injury hindered my year. It was actually supposed to be 100 percent A1 in 2018, but things change obviously in this sport. Sometimes things don’t work out like you want it to. So, we’re just going with the flow right now.

Who are some of your sponsors that you’d like to thank?
I’d like to thank Grindstone, my mom and my dad. Without them I wouldn’t be where I am. Shaney over at Twisted Development. Ty Kady obviously. The Grant family at HLTN and Pete Martini. Aaron from Monster. Answer, Rock River Yamaha, Pro Taper, Shoei, Dragon. Brett from CTI, Dunlop, Little D from FMF. Kyle from Ethika, No Toil, Mike Gilstrap, he’s been a big part of my program for a while, Alpinestars, Works Connection, and my grandma, she helps me out tons.