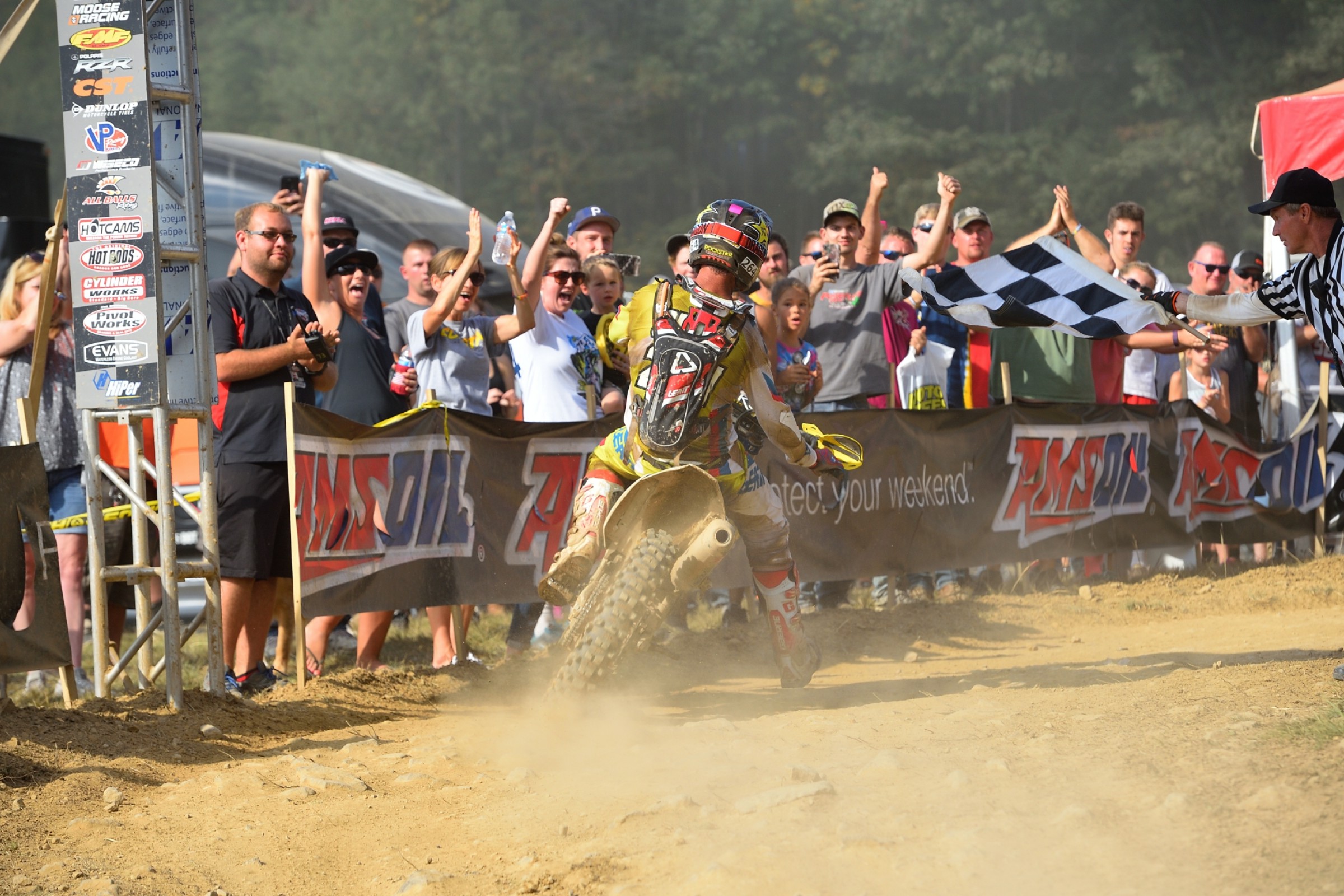 Ryan Sipes switched from full-time motocross and supercross to off-road racing in the Amsoil Grand National Cross Country Championship for the 2014 season. Ever since he decided to make the move, he was considered a man with the speed to win a race, but a victory proved elusive—he’s put together a few strong runs, then a few tough ones, and eventually nearly four full seasons had passed without Sipes getting to the center of the podium. Until Sunday, when it all went right for the Coastal Racing/Husqvarna rider at the Rocky Mountain ATV/MC Mountaineer Run GNCC in Masontown, West Virginia. We called him on Monday morning to figure out what clicked.

Racer X: Okay, what finally happened? What clicked? What was the difference? Why now?
Ryan Sipes: [Laughs] Yeah, I don’t know. Just the last two years have been so frustrating, up and down, have a good race and get on the podium and then I had a lot of bad races, too. I had a bad week this week, too. Rode a lot but just wasn’t riding good and I was getting frustrated. One of the nights this week I just said I’m going to go for it. Win or crash, basically. Maybe not to that extreme exactly, but I felt like it was time to just try to go get it and not have the race come to me. So when I got a good start I just tried to Kailub Russell it and try to sprint away and let him eat the dust. I opened up a really big lead at the beginning and then I had an issue in the pits, and from there we just yo-yoed most of the day. Finally on the last lap I had like a minute lead so I backed it down and ended up winning by 33 seconds or so. I don’t know, I’ve tried that same strategy before—just go for it and get out front and I’ve crashed. So I guess this was the right combination of going fast and also being smart.

I’m sure you’ve tried to just pin it before, but it’s tough in those races. It’s not like motocross when if you get the holeshot you’ve got like a 90 percent chance of running for the win. I see you led this just about the whole way, but it doesn’t work out that way a lot in GNCC.
There’s just so much that can happen: crashes, lappers, the bike, its three hours. Plus that number one guy [Russell] can really make up time on you in a hurry. So my team was giving me the pit board, it was 45 seconds, then it was 55 seconds, then it was 30, it kept changing. I think what happened was we were both making mistakes, and we each had a side of the track where we were better, but I noticed if I had a clean lap I could hold that lead.

Ryan Sipes had some unfortunate circumstances during his pit! He currently still holds the Overall lead but Kailub Russell is now closing in on him! #GNCC #GNCCRacing

How do you block out the pressure? When Kailub was going after you, it had to be hard to just run your own race and not think about “Today could be the day!”
That was hard because second or third lap, I was like “I can win this thing.” But then I was like “Don’t even let that cross your mind.” That’s where I’ve messed up in the past. Maybe I wasn’t thinking about winning the race, but maybe I was just thinking about something else, and that’s all it takes, because if you’re thinking even 10 percent less than what you’ve been doing, that means you’re not going as fast or you’re crashing. Definitely a different bit of pressure. But luckily things did go my way. Like I said, I decided that week that I wasn’t going to give it away.

Does this make it any easier to do this again?
I don’t know, it’s hard to say. The only thing I can say is that I know I can now. And you always do believe you can do it but it’s hard to really know until you do. I’ll be honest, I was starting to wonder if this was ever going to happen! I’ve had kinda of a rough year, just up and down, and a lot of it was me, either crashing or just not riding good. So for sure this could make it easier. I know I can run the speed, I know I’m in shape, I know my bike is good, so I’m looking forward to it.

When you first decided to try it, did you think it would take this long to get one, or did you know it would take a long time?
To be honest, I knew it would take me a little while, but I didn’t think it would take this long. I guess in moto, you can almost kind of luck into a win sooner as long as you’re fast. In off-road that’s a little bit harder. I’ve been fast since I started off-road but I mentioned all the other stuff—you can’t luck into it. You can’t just get a good start and have a few other guys go down in the first turn and you end up winning it. It’s three hours. You have a crash of your own and next thing you know you finish 10th in a race you thought you could win. So it’s been super frustrating because I thought I would have a win by now.

Does that make it feel that much better?
It’s hard to compare it to a supercross win or whatever, because that’s what I grew up doing and focusing on. But at the same time here, it’s hard to learn everything, and you have to put everything together on the same day, and you’ve got to avoid the problems on the same day. A lot has to happen right to win a GNCC so I’m pretty proud of it. When I first came into the GNCCs a few years ago I had no chance—I was so far off. To finally get up here and be the best on one day, I’m pretty proud of it.

Did you ever think you might not come back and keep trying.
The first few years I had my own team and kind of did my own thing with Rockstar and Husqvarna. Then the last two years I’ve been on the Coastal Racing Husqvarna team. I had a two-year deal and this is the end of that. I’m trying to put stuff together for next year, and I’m not going to lie, I’ve thought about it, I don’t know if I wanted to put in this kind of work to finish sixth or to finish eighth, which I would sometimes. Plus, you beat yourself up doing this. Three hours is a long race and it’s not easy whatsoever, and the training is really hard, too. I’ve thought about it. But I really still enjoy riding my dirt bike, plus, it’s a lot more fun when you win! I told one of my buddies “Hey, winning is a lot cooler than not winning. I want to do this more!”

I didn’t get a chance to talk to you about ISDE. I know it was tough getting dealt the death blow for the team when Thad DuVall crashed out like 10 minutes into the race. That had to be tough!
Yeah, that was the thing, like, literally 10 minutes into the first day of six, Thad went down and it was as over. Just one of them things—he went down, wasn’t a sketchy spot or anything, just landed the wrong way. That kind of took the wind out of our sails for a minute, but we were all trying to do well individually, so we had to refocus on that. I had a decent week, I rode well at times; I won Day 2. I also had mistakes, too. Being fifth overall is not bad against the best guys in the world, so I’m pretty proud of it, but at the same time I think I could have been a little better if I had limited the mistakes. That will be the focus for next year.

So what’s the goal now? Win one more?
I want to win two more! The last two—I like those two tracks. That’s just the goal and what I want to do—not guarantee it’s going to happen.