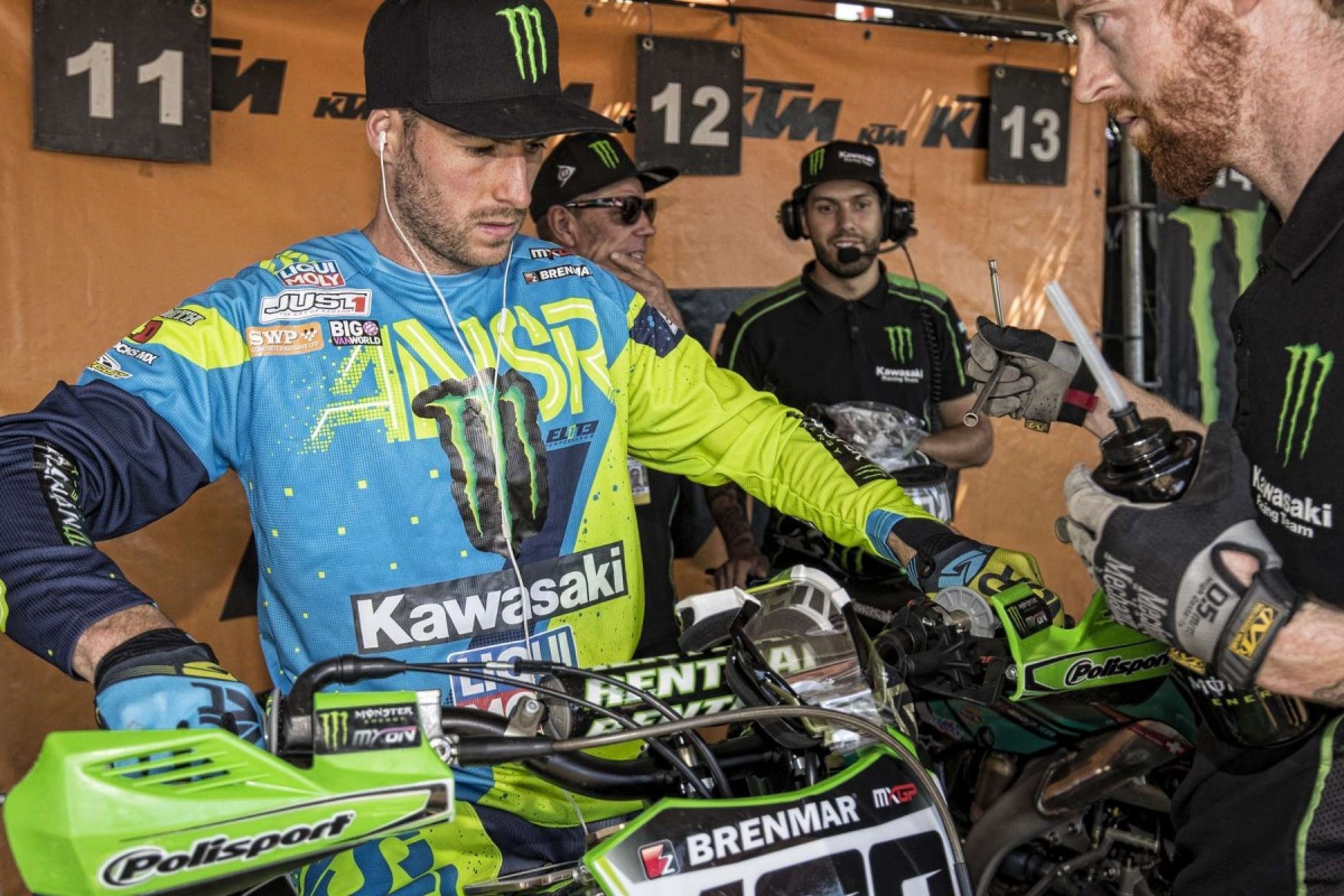 The premier running of the Motocross des Nations took place in Wassenaar, Netherlands, in the autumn of 1947 and three racers from Great Britain—Bill Nicholson, Bob Ray and Fred Rist—won the event. Seventy years later, the Motocross of Nations is the most important motocross race in the world, and Great Britain, the OG Motocross des Nations entity, has won it 16 times (second only to the U.S.) The trouble is, the team hasn’t won it since 1994, and is working on a 20-year streak without so much as a podium finish. That run could end this weekend, with the 2017 event approaching Sunday at Matterley Basin, Winchester, England.

The locals have a very good team this year. In fact, Team Great Britain, consisting of Dean Wilson, Max Anstie, and Tommy Searle, is one of the favorites to win the Chamberlain Trophy. With that, we got Searle on the line. Like his teammates Max and Dean, they have all raced here in the U.S., so it’ll be quite interesting to see how these three competitors fare come the drop of the gate in the homeland.

Racer X: Tommy, we’re basically a handful of days out from the 70th annual running of the Motocross of Nations which will run in your home nation of England. What have you been up to?
Tommy Searle: We just rode the track [at Matterly Basin] today—me and Dean Wilson did. I don’t know if we were meant to ride the track or not. We went down there today and rode a little press day. It was a good day. The track is good. It’s similar to the track we’ve raced on before. They put a couple of little things in. They spent a lot of time putting top soil on it. It’s really nice. They’ve done a really good job. I think come race day it’s going to be even better. It’s really impressive what they’ve done.

How is Dean doing? You guys have to know each other well, right?
Yeah, he’s good. He’s been staying at my place the last two weeks. He came over a bit early. It’s been nice to have somebody to ride with.

How about your other Motocross of Nations teammate Max Anstie? Have you been in communication with him?
Yeah, he’s just been doing his thing. I don’t see as much, really, because he lives in Belgium with the race team. I haven’t seen him so much. But I think he’s over here now, so we can spend more time together next week to hold the three of us together.

I’d imagine you and Max raced together while growing up in England.
Yeah, a little bit. He’s a little bit younger than me, but we were on the same team in the 250 class the last two years that I raced it. Even in America I raced one year with him when he was young. He’s about four years younger than me.

Wilson, Anstie, and yourself add up to a very formidable Motocross of Nations trio. It also appears that the three of you get along well and will be harmonious when it comes to the greater good of the team come race day. That’s all part of being successful at this race, isn’t it?
I agree. I think it’s going to be really good this year.

Is the weather in that part of England dodgy this time of year?
It’s alright. It’s just and off with a little bit of rain. The last couple of weeks have been really good weather, but you never really know in England. In one minute it’s raining and then it’s sunny. It might rain for a couple of days and then be sunny. I don’t know. I’m hoping for the best, really. It would be a lot more fun if it wasn’t raining.

Yet the English fans are used to all that. It’s not like Southern California where everybody panics if there is a rain shower.
No, they know what they’re doing. I think it’s one of those events where it doesn’t really matter too much. The fans are just going to be there, rain or shine, they’re just going to embrace it. They’ll just get after it.

I don’t know how big of a history fan of the sport you are, but as of late, I’ve come across a host of these short films produced in the 1950s and 1960s by British Pathe. A few were shot at Motocross des Nations races that ran in England during that period. The stuff is just mind blowing.
Yeah, I was watching some of those on Facebook. The amount of people that were there was crazy. A few of them, like at Hawkstone, I’d like to ride that track now. It looks better then than it does now.

What do you think? A huge, biblical-size crowd at Matterley Basin come this weekend?
I hope so. The last time, in 2006, it was big, wasn’t it? It was huge. It was my first ever Motocross des Nations. It’s hard for me to remember that weekend. I don’t remember anything from it, which is weird. I remember the after party a little bit because it was the first time I had ever had a drink. I crashed one moto on the start and in the second moto, I got eighth. What I do remember was that there were just so many people there. When you see the pictures that just brings it all back with how many people were actually really there. You see those pictures and you go, “Bloody hell!”

Team Great Britain is going to send you out this weekend on the 250. Are you pumped about that?
Yeah, I’m really excited about that. I have good memories on the 250. I’m especially looking forward to racing the bike. For a couple of days I’ve been on the bike now and Steve Dixon [Monster Energy DRT Kawasaki team owner] has good 250s as well, so we’re doing well.

How do you think you will fare in the MX2 class? I’ve had a few of my buddies tell me they think you can win it.
I’d like to think so. Actually, the main person in the class is Zach Osborne. Obviously, he’s going really well now. He’s had a good season, so he’s on a high. I think he’ll be trying to win that class. I’d like to think that I can get off the start and go for the win in that class, yeah.

How about your 450cc teammates? I think you guys are right there to win it.
I do as well. Max is really on form at the moment. He almost won the last GP. So I think if he can carry on doing his own thing, he can go for the win in either moto. And with Dean, it’s the same, really. If he can get off the start, he’ll be right there. He’s been so solid this season that I think he’ll pull two solid results as well and be in the top five.

The last time Team Great Britain won the Motocross of Nations was in 1994 at Roggenburg, Switzerland. That was the day that Team USA had its 13-year MXoN win streak snapped. You would have been five years old, but do you know of that day?
Oh yeah I know, they still talk about that one! That was Malin’s day, wasn’t it?

Yes, Paul Malin, who raced the 125 for Team Great Britain, had a brilliant day, as did Kurt Nicoll and Rob Herring.
I should watch that video. I’ll go back and see if I can find it somewhere.

Can you guys win on Sunday? Do you expect to win? At the end of the day, what do you think will make you guys happy?
I’ve never been on the podium at the Motocross of Nations. If we were to stand on the podium, I would be happy with that. I think the whole of Great Britain want us to be up there and the crowd around the podium at the end of the day, I think it would make everyone’s weekend. I don’t see a reason why we can’t win if everything goes our way. There is a lot of luck involved in this event, so if everything goes are way, I don’t see any reasons why can’t win.

It’s kind of a toss-up this year, huh? I mean, I don’t think any one nation looks unbeatable or overpowering. What do you think?
A lot of people, like France, have had a couple riders drop out and now Belgium has had a couple drop out. And now you’ve got a couple of teams that have come up and they’ve got three good riders, like Switzerland and Holland are now in the mix to win it. There are a lot of teams that have stepped up over the last few years. It’s like all of a sudden they’ve got three good riders and they stand a chance as well.

How about Team USA, Tommy? I want you to be as honest as you can. Do they stand a chance?
Yeah, I think they have a shot. I think Thomas is on his A game at the moment and I think he is going to be fighting up there for the podium in his class, without a doubt. He rips starts and once he gets the start there is no stopping him. I think Thomas is going to surprise a lot of people on that 450. Seely, I don’t know, really. I don’t know how fast he is; I haven’t seen him race in a long time. I’m sure he’ll be up there with a couple of good starts. And then you have Zach. He just goes for it. He just gives it everything anytime he’s on a motorbike. I don’t see why they won’t have a shot at the podium. They always have a shot at the podium. I think they’re in there with everyone else. I don’t think they have an advantage this year over anyone else. I don’t think they’re favorites coming in, but I think that might play in their favor.

Are you surprised a few of the other American-based riders who would likely fare well at the MXoN didn’t want to line up and race?
It’s surprising. I think a lot of people are surprised about that, but at the same time, I’m not one to judge because their season is long. You don’t know how mentally tough it is. It’s hard to judge. It’s not my call. But I know in England, us guys, we can’t wait. It’s one thing that we love to do and if you get chosen it’s a massive deal. You’re almost fighting to get chosen. It’s massive for us. It’s a chance to end the season on a high, and especially it being in Great Britain, I think it’s going to one tremendous event. It’s a massive deal to be chosen.

It has been a rough season for you, and as you just alluded to, the Motocross of Nations could be a ray of sunshine on everything, couldn’t it?
No, it will. It will finish it off nicely. I was hurt with my knee this year and then I had another small injury in my hand, so it’s been terrible year, to be honest. It’s a year I would like to be done with and to end it on a high.