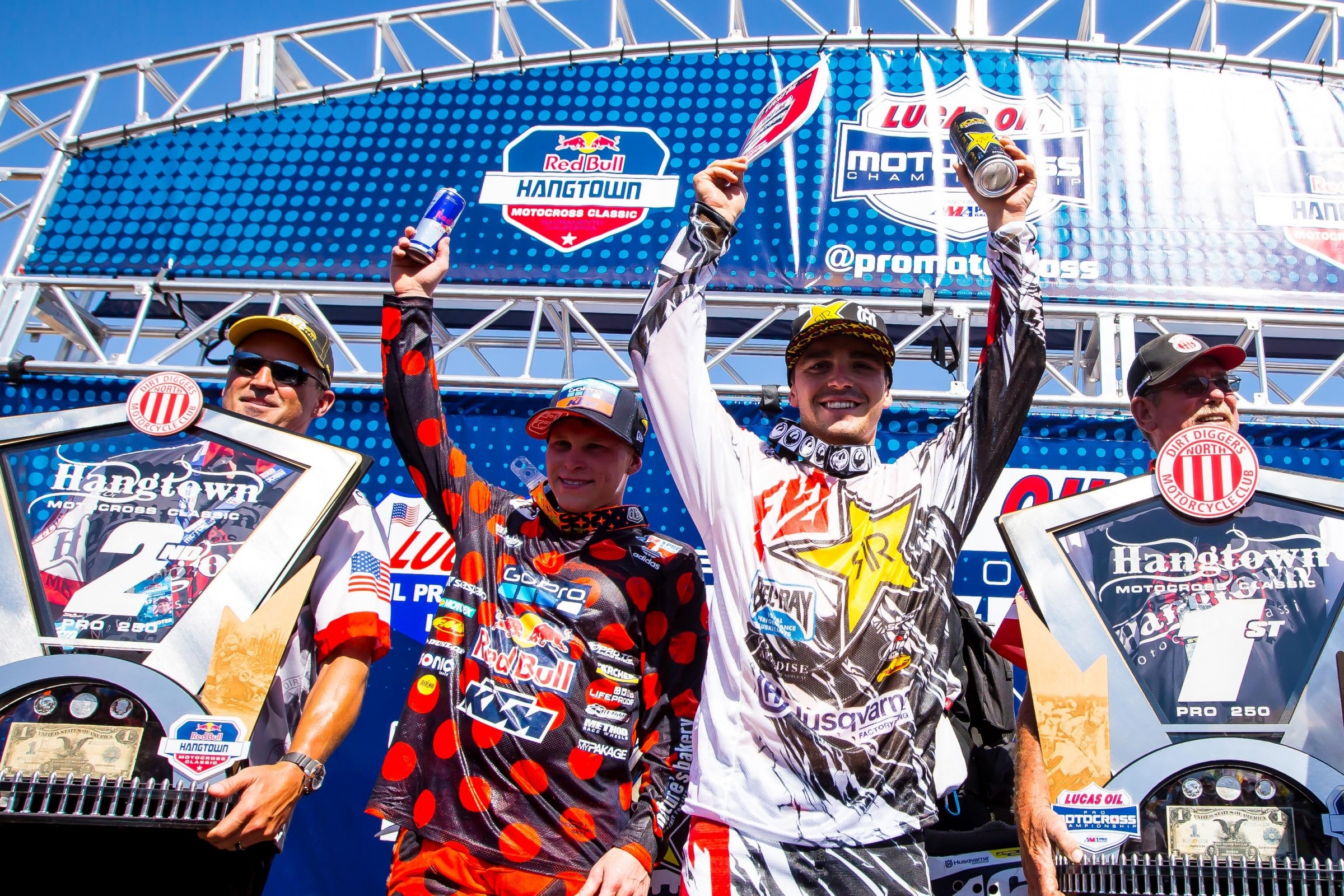 Redux The Unlikely Rise of Zacho and A-Mart

We intercepted top-secret email transmissions between Jason Weigandt and Steve Matthes and posted it here. It appears this is a rare moment where the two actually agree on something. Have a look.

Jason Weigandt: So we're doing this Loretta's countdown everyday on the site and it's interesting to see that today’s 450MX front runners battled each other back in their amateur days. Tomac, Baggett, Wilson, Barcia, and Anderson tangled quite a bit in their rise through the ranks. Basically, look at the American amateur ranks from seven years ago (and add in token fast foreign guy, played by Marvin Musquin this year) and it's like this was exactly how it was supposed to work out.

But then we have the 250s. Tell someone seven years ago that Zach Osborne and Alex Martin would be first and second in 250MX points in 2017 and you'd have to turn in your "I'm a motocross fan" card. Get a clue, dude!

It's crazy that these guys are here. Of course you probably want some credit because you rescued your little Zachy Poo from Europe and you've been in the Ewok Warrior's corner for a long time. But which rise has impressed you more?

Steve Matthes: Good topic, Weege. Troll and Wacko are currently one and two in the 250MX points and yeah they’re “experienced” in the class, but when it comes to the250 Class in Lucas Oil Pro Motocross, I don’t want to hear that riders should be forced out of the class. People who say that forget about the past years when riders like Mark Barnett, Steve Lamson (then in his sixth or seventh year as a pro), or Mike Brown made a living in the small bike class and won titles. I have zero issues with either of these guys racing 250 motocross and being older.

That said, you touched on the Loretta Lynn’s thing and that’s where these two riders are different. Zach was a top amateur rider and most people thought he had a chance get where he is now. On the other hand, NO ONE, not even John and Greta Martin, thought Alex would be a race/moto winner and regular podium guy. Zach himself admits that when he hit the amateur scene for KTM he wasn’t in good enough shape (and to be fair, KTM itself was a bit unorganized) and he blew a chance he had on the factory team. There was no factory team for A-Mart, he was on privateer team after privateer team. While Wacko has impressed, it’s been A-Mart who has been by far the most unlikely contender in MOTOCROSS HISTORY!!!

Weigandt: First of all, you'd better explain why it's okay for Troll and Zacho to stay in 250MX after spending years raging on Davalos for staying in the 250s.

Second, and as much as it pains me to say, I agree with you. I can't think of any other rider who was more unlikely to get into this position than A-Mart. You could probably argue Weston Peick, but Weston actually took a few years off from racing as an amateur, and when he came back he won a B title at Loretta’s, even besting Malcolm Stewart. Meanwhile, Alex was there the whole time, year after year, not winning anything. I remember he got a one-race fill in deal with GEICO Honda at Millville and did pretty good, like eighth overall, and he said in an interview he'd love to have that bike again. And I was thinking: "Yeah right, kid, like you'll ever be on a factory team again."

Oops. I can't figure out how he managed to improve so much, but this is seriously an inspiration to any mid-level privateer or decent amateur who is not a star. Somehow someway Alex figured it out, although it's so unlikely it makes me wonder if he had some sort of Cinderella spell put on him or maybe made a deal with the devil.

But here's the problem, Steve. Now that Alex has done it, there will be 100 other riders thinking they could be the next A-Mart, so they will keep on trying when maybe they would be better off moving on and finding a real job. Like, let’s say my son wants to race motocross and turns out to be merely “ehhhh” in talent or speed as an amateur. Instead of all the sacrifice and money needed to keep trying, I could say, “Look son it’s not going to work out, you need to get a real job.” But now all he will have to do is point to Troll as proof that he needs to stick with it!

It's not going to work out for most of these riders because Alex has basically beaten lottery odds to improve this much. Are we now going to have eighth place dudes at Loretta's claiming the industry sucks because they can't get a factory bike like A-Mart (eventually) did?

Matthes: Well, Weege, the 250MX class has always been wide open and features the best 250MX riders in the USA. The 250SX class was designed for riders to get their feet wet in the difficult discipline of supercross and, to help out with expenses and results, the field was cut in half, to East and West. Motocross is very different from that. For example, for a couple of years factory Honda had two-time 250SX champion Ernesto Fonseca in the 450SX class AND the 250MX class and no one said a word. Ernie was a smaller dude, Honda needed a guy in the class and it worked out. And everyone was happy. Got it?

Anyways, aren’t you siding with me on this in saying that A-Mart’s rise has impressed you more than Osborne’s? I thought you were taking the other side here? Anyhoo, A-Mart’s story was chronicled pretty well in the Eleven-10 Mods story that I did a while back and there were, as you say, many years of just so-so results. So what happened? How did he get better? When you ask him he says he got on a good bike that would finish races and a team (Rock River Yamaha) that took all the worries about getting to the races away and allowed him to focus on one thing and that was racing. That doesn’t seem like the answer though, right? Otherwise we’d be talking about, AHEM, Marty as a multi-time 250 champion. Or Chris Gosselaar. Or any other rider that had multiple chances on very good teams in the 250 Class. Why did it work out for Alex and not them? The bike alone can’t be it.

One thing, Weege. When you talk to people who knew Alex well back in the day, whether it’s Alan Brown at Ti-LUBE Honda or Nate Alexander who was a mechanic at Eleven-10 or even his buddy Phil Nicoletti who hates to dish out compliments, they all say that Alex Martin has never, ever been afraid of working hard off the bike. Training was always something he enjoyed and still does by all accounts. He even reads books on nutrition and fitness. So maybe when you add up all of that knowledge, and the work, and combine that with a bike and team that provides no worried, you get a race winner?

Weigandt: Okay, yes hard work pays off, we hear it all the time and Alex is just the ultimate proof. But maybe that's what makes Zach's rise unlikely too, maybe even more unlikely in its own way.

When I first went to Loretta's to cover the races Osborne was a big name, but he was also just big. Like, chubby. No one dared say anything though because, "Ricky Carmichael was a short chubby kid and he killed it."

Er, uh, yeah but what happened when Zach turned pro? Didn't kill it. Zach looked out of shape and actually was out of shape and his prospects fizzled almost immediately. I remember interviewing young Zacho once and he told me he couldn't understand why he was having health problems. As he told me this, he was sucking on a lollipop! After fading badly during a moto!

It's a story we've seen a hundred times, a talent who could have made it but didn’t make the sacrifices and put in the work. There aren't any other Alex Martins, but there were HUNDREDS of Zach Osbornes through time. Now, we all know Zach went way way down and that gave him the motivation to come back up. But that stuff didn't work for any of the other washouts. Most of these guys lose rides, they try to get something going overseas, they try starting their own teams and go back to their old brand or old roots or back to their dad as a mechanic working from a pickup truck, whatever it is. With each change, they claim it’s all going to turn around finally. But they sink and they just keep sinking. Everyone can think of a super-talented kid that bombed out in the pros and never got it fixed. There’s probably a Vital MX thread on one of them right now.

Osborne was set on the course. He pulled out of it. That's remarkable.

Matthes: Yeah, I’ll give you that. Sucking so bad that you’re forced to go to Europe and THEN coming back to win in the U.S. is perhaps unprecedented. No wait, it IS unprecedented. The GPs were where American careers went to die and if you want proof, I don’t have a couple of hours to waste typing out the names of riders who went there and then that was their final days of their career.

The few Americans, like Mike Brown, who came back to the U.S. and succeeded had different circumstances than Zach. Brown was already a proven race winner here, he just pointed out of the 125SX class and had to go to Europe because he couldn’t get a 250SX ride. Brown had already won Nationals and 125SX races in the U.S. When he came back, he was just back up front again. Wacko Zacho wasn’t even close to the front when he left.

And Wacko’s results have been better than Alex’s, no doubt about that. He’s leading him in points right now and won a 250SX title this year. I feel like if both riders had bar graphs for how much they’ve gotten better, Osborne’s overall level would be higher but the actual level of improvement would be the same, you know? Alex came from less, but they travelled the same distance. You getting this? Anyways, the “Golden Child” Osborne had KTM, Yamaha of Troy, Dixon Racing, and GEICO Honda rides before settling at Husky now. All paid rides? A-Mart? Well it’s just too depressing to list. He has really risen from basically nothing.

One thing’s for sure, Filthy Phil says they both still suck. 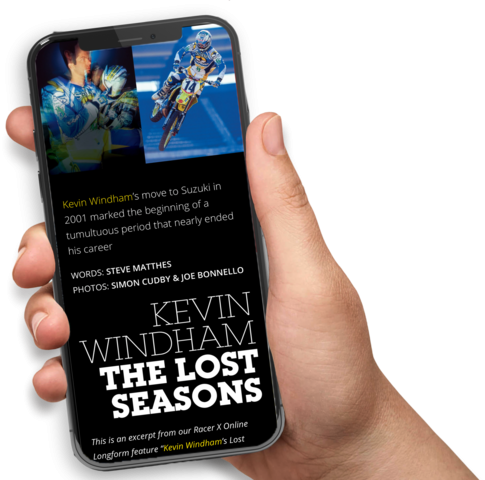 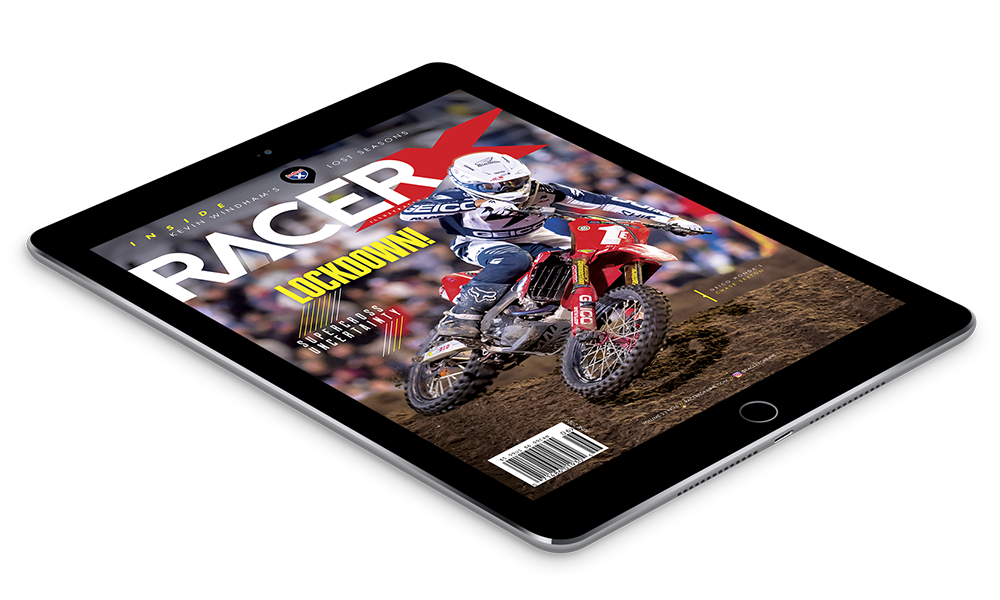