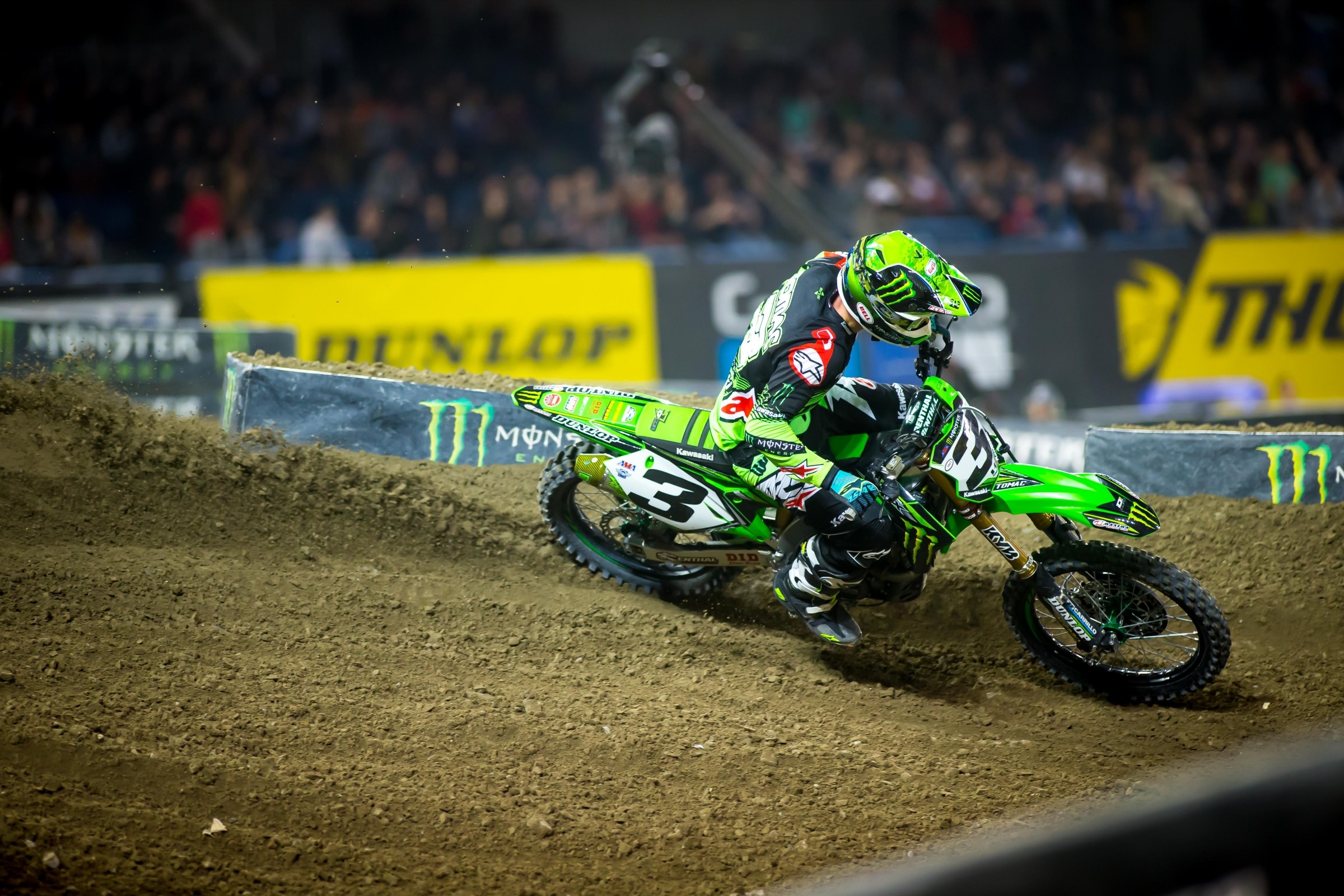 This is not the typical scenario in Monster Energy Supercross. Usually, for a rider to hit Daytona with a big points lead, he has to have won a lot of races. But this year it’s Eli Tomac with the most wins—four now after Toronto. He also faces a 24-point deficit to Ryan Dungey, who has only won twice, but continues to be robotically consistent, with podiums in all but one race (which was a fourth).

Tomac’s only chance now? He can’t wait or hope for a mistake. He’s just going to have to win. A lot.

“I guess if it wasn’t Ryan Dungey’s name in front of me I would say seconds and thirds are acceptable, but it’s Ryan Dungey in front of me so the only thing I can do is go out there and win,” Tomac told our Chase Stallo over the weekend. “It’s nice that we’re getting it rolling now. I was able to get a good start this week and get out front early. It’s kind of like we flip-flopped nights. Last week I got a bad start, came up to second. This week I got the start and he was a little bit buried and got to second. So it’s going to be a dog fight to the end for sure.”

To make it a true fight to the end, Tomac is going to have to keep winning, as he has no room for error—one more bad race and Dungey’s lead will be far too big to overcome—which requires throwing caution to the wind. Tomac doesn’t mind this scenario, though, because at least he’s riding well and winning races. He certainly has the feeling any racer strives for, if not the position in the standings.

“It’s a cool place to be in, but the ultimate goal is trying to hunt down the points. I’m having a good time enjoying racing right now,” he says, while saying it is “absolutely” the best he’s ever been in supercross.

No doubt he’s come a long way from the early rounds of the series, where he was struggling with arm pump and finishing off the podium. It’s also a marked improvement from last year, which never really saw him hit the expected strides with Monster Energy Kawasaki. The whole Tomac/Kawasaki mash-up didn’t really click until Phoenix this year, when he went out and walloped the field. Since then, he’s been arguably the fastest rider every weekend.

“Yeah, there were changes before Phoenix,” he said. “It took me a few weeks to figure it out on what I needed to fix. Went to work and we got her fixed and now we can go out there and just race. In Phoenix’s situation it was kind of the opposite of what our typical tracks get, or what they turn into which is a lot of tight inside lines. The lines come down on each other, a lot of ruts, where Phoenix was more open. I would say even the Oakland race kind of solidified our whole setup where I could win in a hard pack open stadium or a nasty, rutted tight track. So we’re in a good spot. I feel like if I make a mistake it’s all on me. I have the machine to do it now, so it’s pretty cool.”

Talking to some insiders, one of the issues Tomac faced early in the season were tracks that didn’t match up to his home track in Colorado or the Kawasaki track in California. Namely, the race tracks have been tighter than expected, and it took a few rounds to adjust the bike accordingly. Glendale was relatively big, fast, and open—so that’s why it took success in the rutted mess of Oakland to drive home the point.

This is the first year Tomac can be considered to be in the 450 points hunt. In 2014, his rookie year, he was injured at round one. In 2015, he crashed out of Anaheim 1 again, but roared back at round two, tracking down Ken Roczen to take the victory. His season was inconsistent from there, though, and while he finished second in points behind Dungey, he was already down a whopping 63 points after nine races, which makes this year’s 24-point deficit seem tiny in comparison. Still, he’s going to have to be perfect through the second half to make it happen, both winning races and avoiding the mistakes. Matched against Dungey, it won’t be easy.

“It’s pressure, but it’s good pressure,” he said. “I like it right now. It makes me want to go out there and just race and do it. I’m having a good time this year. I feel like I can go out there and win races now. I don’t know what to say. There’s eight rounds left. There’s some good tracks coming. Never say die, I guess.”