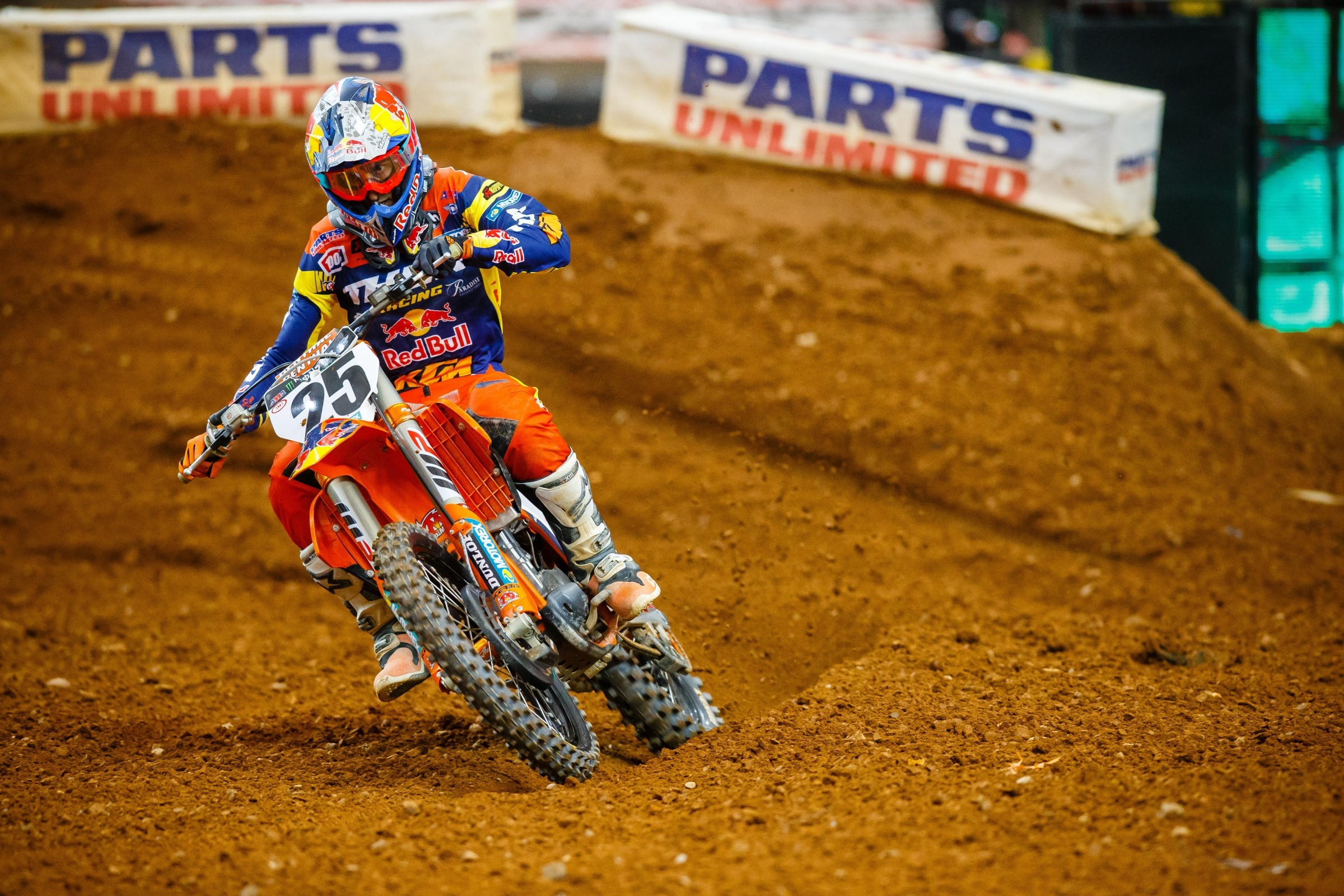 Landing on the 450SX podium is a big accomplishment no matter who you are, but for Blake Baggett and the Rocky Mountain ATV/MC-WPS-KTM team, last Saturday’s third place was especially sweet. A 450SX podium has been the team’s ultimate goal for a very long time and they were ecstatic after finally getting it done in Atlanta. Now that the monkey is off their back, we’ll see if the team can turn the Georgia Dome podium into a podium streak in Toronto. –Aaron Hansel

If you didn’t know Zach Osborne had never won a supercross race before you probably wouldn’t have guessed it while watching the 250SX main event. Osborne, who took over the lead on lap six and never looked back, rode brilliantly to finally notch the first 250SX win of his career by over six seconds. Well, it finally did look like his first win as he celebrated on the last lap and over the finish line, because he let the emotion loose. Plus, thanks to Joey Savatgy’s fourth place, Osborne also took over the points lead. Can Osborne increase his championship lead and win count in Toronto? -Hansel

After winning the 250SX East Region opener in Minneapolis, Savatgy got a bad start in Atlanta and was unable to repeat the feat. In fact, Savatgy didn’t even make the podium in the Georgia Dome, which at this point in his career comes as a bit of a surprise. He also lost the red plate and now trails Osborne by two points. If Savatgy can bounce back for a win in Toronto, he’ll regain the points lead and prevent Osborne from gathering any dangerous momentum. -Hansel

In case you didn’t know, a broken femur is no joke and can be very difficult to come back strong from, especially in a relatively short period of time. Apparently nobody told Colt Nichols this information. The Yamalube/Star Racing Yamaha rider broke the biggest bone in his body in November, yet somehow, less than four months later, figured out a way to get on the podium in Atlanta. That’s incredible! With that kind of speed on tap so soon, you’ve got to think there’s more podiums, and possibly even a win, on the way. -Hansel

If you want to keep your eye on a close 450SX points battle you won’t find it at the front of the pack right now—Ryan Dungey currently has 25 points, a whole race’s worth, on Marvin Musquin in second place. However, the points race is tight for second place—Musquin sits just two points ahead of Eli Tomac. Both riders have won this season and both are capable of beating each other, depending on who gets a better start. Tomac held second place before his 15th in Arlington, we’ll see if he gets it back in Toronto. -Hansel

While we’ve chronicled this story a few times—twice last year and even earlier this week—it still doesn’t get the attention it deserves. Ryan Dungey has become a master of braking early, cutting to the inside of the first turn and grabbing the holeshot. As Dan Carlson pointed out this week, the technique hasn’t been as successful this year as many track designs have featured either long and sweeping starts, or two 90-degree first turns. Watch this video from Atlanta last weekend, though, and you’ll see Dungey’s artistry at work. Toronto appears to have a longer start than Atlanta, so we’ll see if it works for the points leader this weekend. –Chase Stallo

While it made for some fantastic photography, the wall jump into the sand last weekend didn’t draw rave reviews from riders. Here’s a sample from the 450 podium:

Any of you guys can answer. In your wish list for future tracks, is a wall jump followed by a sand section going to be on the list?
Dungey: That was pretty nasty.

Tomac: That was just ridiculous. Even the wall jumps themselves, I think with the timed events now there’s really no reason for them. Why are we getting slowed down? And a wall? It’s a wall. I think about every rider would say they don’t like them at all. The sand too. The sand is cool, but with the wall there … I don’t want to sound like a whiner, but it was kind of dumb.

Dungey: Yeah, it would have been better it we were doubling into the sand. You seen a guy roll over the top, and a lapper, he don’t know.

Baggett: I couldn’t even see half the time when I went over it either, if there was somebody in front of you.

Well, if the track map stays true to form, riders will have to deal with it again this weekend. While things could obviously change between now and then, it’s something to keep an eye on. –Stallo

Starts More Important Than Ever?

That’s hard to judge without some solid stats backing it up, but … here are some stats! Starts are definitely at a premium this year. Take the chart below for example. In six of eight rounds in 450SX this year, the eventual winner has led EVERY lap!

That’s not good for the riders or the fans. Hopefully something changes this weekend. –Stallo

Both Jason Anderson and Cole Seely have been remarkably consistent through eight rounds. Anderson, once known for flashing speed but inconsistency, has yet to finish outside the top-10 in events he’s competed in (missed Anaheim II due to suspension) and has finished fourth five times this year. Although he only has one podium, his consistency has put him fifth in points, 26 back of Eli Tomac in third. Meanwhile, Cole Seely is the only rider aside from Ryan Dungey and Marvin Musquin to finish inside the top 10 at every round. Seely hasn’t been knocking off podiums at an alarming rate—just two through eight rounds—but he has finished sixth or better at every round, which has him in the hunt for second in points. He’s currently 11 back of Marvin Musquin. Will the trend continue for JA and Seely this weekend? –Stallo

Adam Cianciarulo had a very telling quote after a two mistakes in Atlanta, which probably cost him a podium. “I feel like I’ve been making some silly rookie mistakes, but I know that will come around when I get some more racing under my belt. Even with the mistakes that I made, I do think my racing is coming along after so much time away from supercross.” While AC raced his first career supercross in 2014, he only has eight main event appearances in his career—currently tied with Fredrick Noren for the least amongst the top-10 250SX East riders.

Can AC work out his kinks and get back on the podium in just his third race since 2014 this weekend? –Stallo