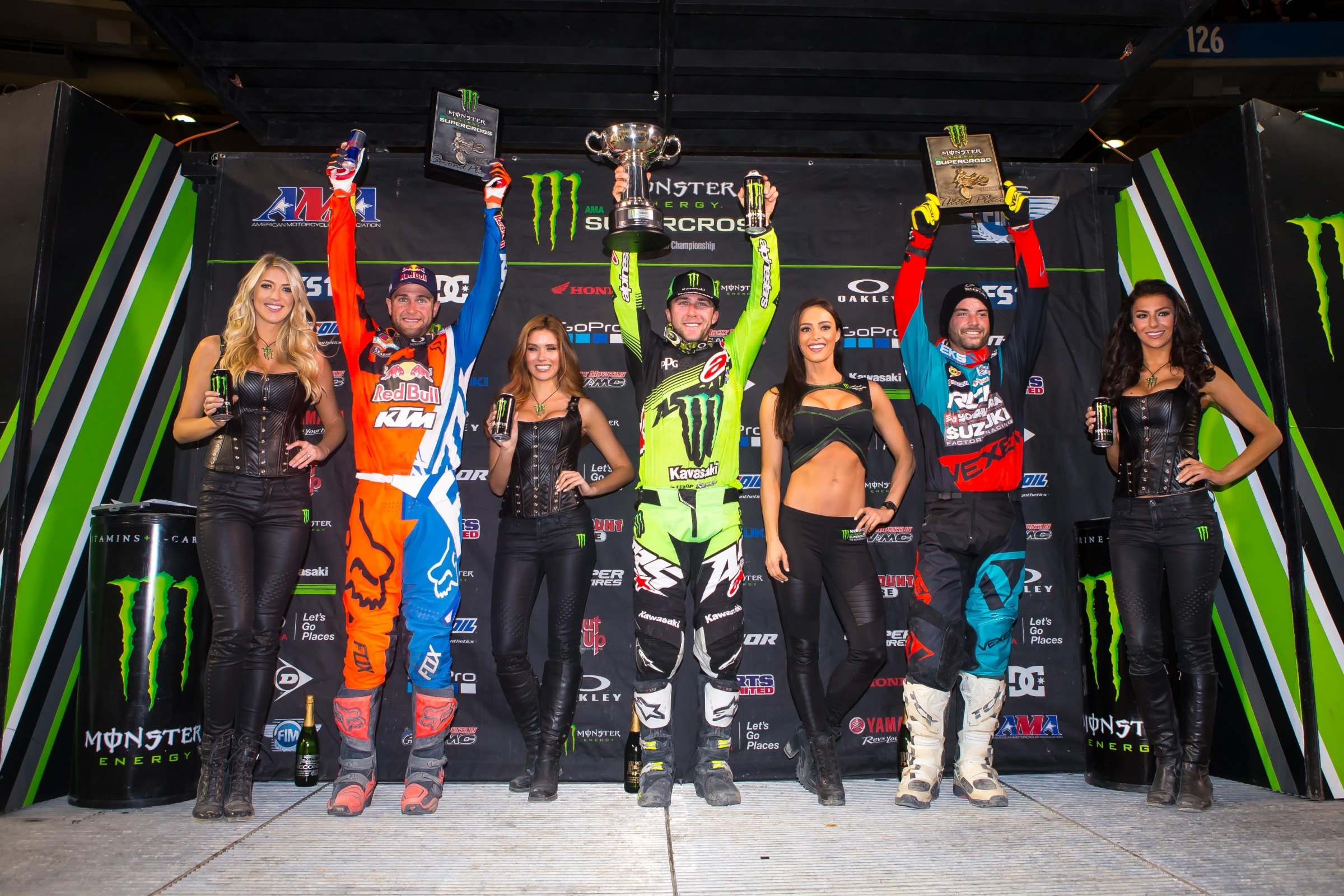 He was only able to pick up three points, though, as Red Bull KTM’s Ryan Dungey fought through the pack after a bad start and claimed second. Dungey now enters Daytona next weekend 24 points ahead of Tomac.

RCH/Yoshimura Suzuki’s Broc Tickle ran second for a majority of the race, before falling victim to Dungey’s charge. Still, Tickle’s third is a major career milestone, as it’s his first in 450SX.

Racer X: Broc, congratulations. As far as the main event itself goes, you rode most of it alone. What were you thinking? For about a 15-minute block there where you were pretty much had a gap in front of you, gap behind you, all by yourself. What was going through your mind?
Broc Tickle: Yeah, I just needed to focus on myself, and I knew that. I’ve been doing this for a while now. I got off to a good start and knew I just needed to put in the laps I needed to. The track was tough tonight. It was all about hitting your lines, jumping the jumps and staying smooth and not panicking. So for me, that’s all I tried to focus on and it worked out. Ryan got around me I think five or six laps to go, and that honestly helped me a little bit get back in a little groove because I kind of tightened up there at the end.

Ryan, a pretty hard-fought second place. Tough start there. I think you might have had to pass almost everybody tonight. Early in the main event was there a time when you were kind of in that cluster of guys that you had any kind of concern?
Ryan Dungey: I think the only thing that ran through my head was obviously not to get ahead of myself and just try to pick off as many guys as I can. I did not think I’d get to second, by any means. I was looking at it. I just tried to keep hitting my marks, not make any big mistakes—and I didn’t. For the most part I hit my lines good. I rode good, I felt good, and the bike felt good as well. Track really deteriorated pretty fast, but before I knew it I found myself in fifth. Then there was [Blake] Baggett, and a couple of guys made mistakes, and then there was Tickle. I was really happy with the night and the ride, it just would have been a little bit—the start I wish was there and to be up there with Eli and given [him] a good race, but overall a good night.

Eli, congrats on the win. Good start, got out front pretty early. Was there any point during the main event at all where you knew where Ryan was or were glancing over to check on his progress as he made his way through the field?
Eli Tomac: Yeah. I try to keep an eye out if I can. There’s certain points where, yeah, you want to do your thing but it is good to eye guys and see where they’re at, just so you kind of know what kind of pace you can push, if you can raise the pace or not, or just to manage. I was just trying to manage a good, safe lead and get through the night. Once again, that was a gnarly track.

Broc, around this point every year you build and build and we hit this point and everything just kind of falls into stride. Is that coincidence or do you think you have to build and figure everything out over those first few weeks?
Tickle: Obviously I don’t want to say that’s true, but it seems to happen. I had the best off-season I’ve ever had and put in a lot of work with the team and made a lot of progress for myself and the bike. I felt like we came into A1 ready, and I didn’t want to put pressure on myself but I felt like I could be up here. I know a lot of guys are hurt right now, but I feel like it’s realistic for myself to believe I should be up here. For me, it was a struggle obviously until now, but the start is where I’ve been slacking and tonight I did all three starts and I was there. Just got to keep that going and stay focused on myself and hit my marks every single time I go to the track. I have the speed and I can do it, I feel like. Every weekend it’s going to be a little different. This guy’s track or this guy’s track. So it just depends on how you feel on the weekend and taking advantage of it.

Broc, there was some talk towards the end of last season that the team that the team might not be around this year. What does it mean to you to get your career best finish with this team that has stuck by you for a good number of years now?
Tickle: Yeah, I’ve been with the team ever since they started, so it’s been awesome. We’ve made progress every year. It’s been really good. I got two podiums last year in outdoors, and that was awesome. Then I got hurt, unfortunately. The whole off-season, like I said, it was the best we’ve ever had as a team. We put in a lot of work and finally now it’s showing. I’m stoked and happy to be where I’m at.

Eli and Ryan, the race to the pole position was kind of dependent on that quad in the middle of that long rhythm section, and then during the main event depended on not jumping that and being smart about it. Take us through that a little bit.
Dungey: I guess for me, I never did it in the main event actually, the quad. I saw what [Joey] Savatgy did. I seen where I was at. I felt like as I was catching the guys, I was like, I’m gaining enough time on these guys to get to second, I see by now. It just was so rutted it wasn’t worth it for me, I thought. I didn’t see what Eli was doing, but I tried to more hit the consistent line than chance it. I felt like it was kind of a big risk to do it in the main.

Tomac: Yeah, in the main it was broke down. I think I did it once or twice and that was about it. There was even some times where I was literally doubling through that whole section because even the jump before that, just getting over the tabletop and landing the double, if you overshot it you’d land in the ruts. I even had a spill there in practice. That was a tough one. It seemed like if you could get to that quad it was there—it was almost tougher to do the double and the triple before it.

Ryan and Eli, we see each and every weekend different starts from you guys. Ryan got the start last week and this week you were mid-pack. The weekend before we saw the same thing from Eli. I’m just wondering what you guys are doing different. I don’t see the consistency that I’ve seen before.
Dungey: For me, I’m not quite sure. Dallas wasn’t a great start and neither was tonight. Last week was good. On the gate, you see where everybody’s at, who’s got a good line. Eli had a really good gate for sure, and so did I. I went inside a little bit more than I wanted to, but after the gate it was better. I knew I had to get the power to the ground and I didn’t. I got too far forward and I spun. The things are happening so quick and it’s more instinct than it is actually taking yourself through it. It’s kind of what you taught yourself to do and just a little too much clutch, a little too much weight forward and sadly it’s the difference from a holeshot and way back in the pack. So they’ve been a little inconsistent. I’ll try to clean those up for sure.

Tomac: Going to the start, some of it can just be from your qualifying times and your heat races, if you get that good gate pick for the rut, and then after that you got to go out there and just execute the start and do it. It’s tough. Sometimes it doesn’t matter if you win your heat race, or sometimes it does matter because a lot of those gates will be messed up.

Broc, sitting in second place, probably a lot of things to think about while you’re there by yourself, then up comes the number one machine. What was going through your head there when you had about five seconds on the guy?
Tickle: I was trying to focus on myself and hit the lines that I needed to. I felt like in certain areas of the track I was pretty good and then other areas of the track I kind of struggled. I saw Blake [Baggett] too behind him, so I knew I needed to go if he was going to get around me. Ryan made the pass down the mechanics area, and honestly like I said, helped me get into a flow. I caught onto some of his lines and it helped me there to finish out the main and not struggle where I was struggling earlier.

Entering the weekend, five of eight rounds, the eventual winner has led every lap. Are starts more important this year and if so, why?
Tomac: I would say yes, they’re important. The class is so competitive—if a guy does get a holeshot and you’re stuck in eighth or ninth he can make the runaway and he’s got 10 seconds on you before halfway. A lot of times it’s over by then. I would say because it’s so competitive you can’t just literally go through everyone and expect to make the run to the front. I would just say everyone’s so fast and so good now it’s tough to do it.

Dungey: I would agree. Just being able to get up front and hit your lines, hit your marks, not have anybody in front of you to get roosted or sprayed. You just get out front and go and that’s the best scenario.

Tickle: You can look at results from last week and you can answer that yourself. I feel like last week I rode the worst I’ve rode just because I got a bad start. I got 14th and I tried. Tonight I get a good start and I put myself in a position to ride like myself. That’s what it comes down to. All of us from qualifying—I don’t know about tonight, but every weekend from third, fourth to 14th is one second. So that on the track if you’re out front running like I was tonight it’s easy, but if you’re in the back worrying about the guy behind you, the guy in front of you, trying to pass this guy, trying to pass that guy, you can’t really do what you want to. Definitely was a lot easier to get up front and put in some laps that I felt like I was comfortable doing.