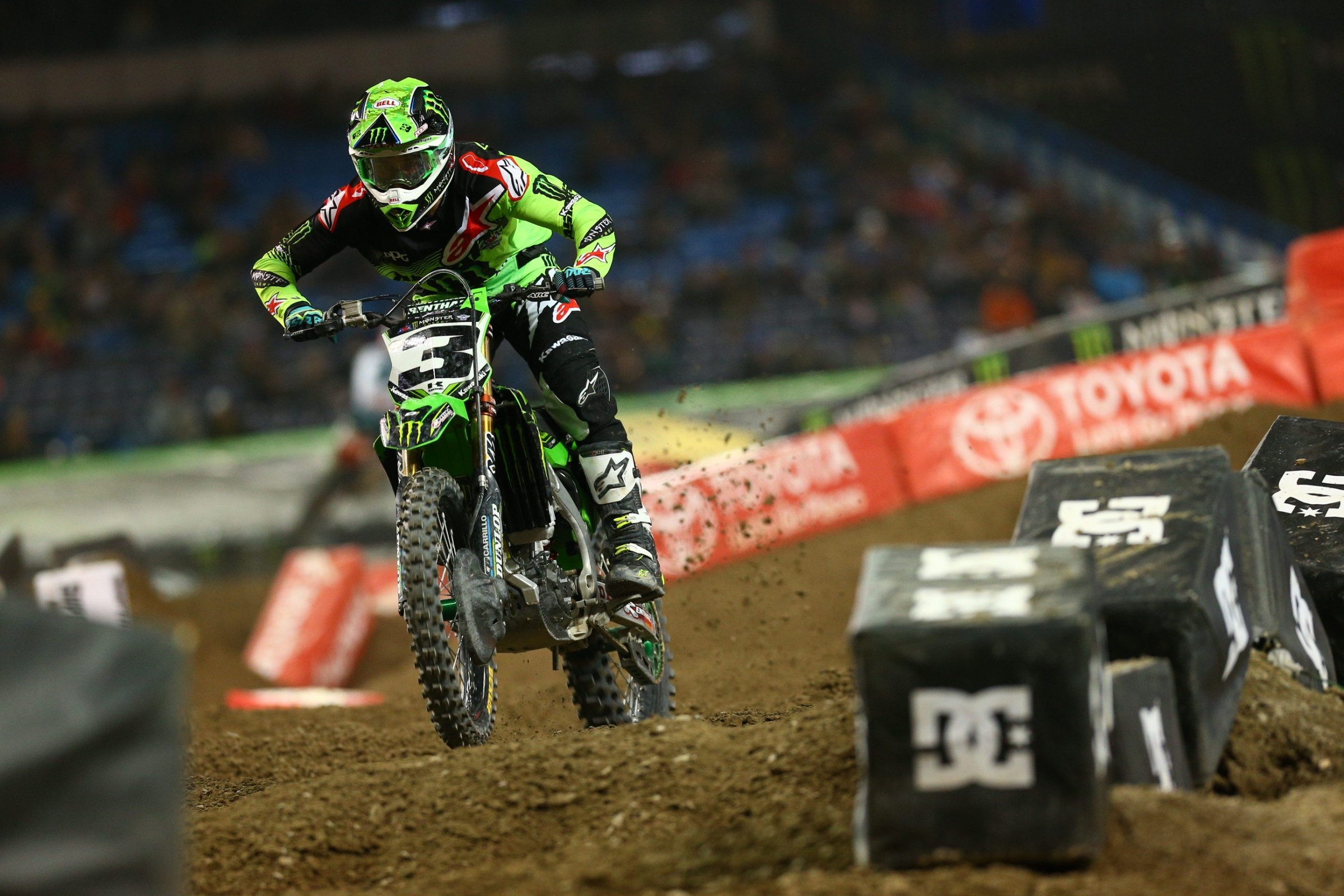 Simply put: Eli Tomac is the hottest rider in Monster Energy Supercross right now. Winner of four of the last six races after tonight’s dominating performance at round nine of the series in Toronto, Ontario, Tomac is firing on all cylinders. It hasn’t been that way all season, though, as Tomac struggled out of the gate to 5-6-8 finishes earlier in the season. He told us after tonight’s 14.2 second win that they made changes before Glendale and everything has clicked since then and that they’ve been able to carry it to other rounds. He didn’t specify the change, but whatever it is, it’s obviously working. Tomac now has the most wins on the season (4) and has led the most laps (72) but he’s still second in the most important category—points.

While he picked up three more tonight, Tomac still trails Red Bull KTM’s Ryan Dungey by 24 with eight rounds remaining. Asked if he was in a must-win situation going forward, Tomac said: “I guess if it wasn’t Ryan Dungey’s name in front of me, I could say ‘Oh, hey, second and third is acceptable.’ But it’s Ryan Dungey in front of me so the only thing I can do is to go out there and try to win.”

Tomac faces a stiff challenge if he’s to catch Dungey. Since the start of the 2015 season, Dungey has only finished off the podium three times, and only once through nine rounds in 2017. Tonight, Dungey’s chance at victory ended off the start, as he was buried in ninth after the first lap. This allowed Tomac to sprint to an early lead and never look back. But, as he’s done so many times through his two title winning seasons, Dungey salvaged a ton of points by making his way to second. It wasn’t easy, though, as Dungey admitted post-race.

“I didn’t think I’d get to second by any means,” he told the media. “I just tried to keep hitting my marks, and not make any big mistakes—and I didn’t for the most part.”

For a majority of the race, second belonged to RCH/Yoshimura Suzuki’s Broc Tickle, who was seeking his first career podium in 450SX. Although Atlanta was disappointing (14th) Tickle is finding his stride mid-way through the season, finishing 6-7 at Arlington and Minneapolis respectively. In recent years, Tickle has seemed to pick up momentum as the season has gone along. He was asked about it post-race.

“I mean, obviously I don’t want to say that’s true, but it seems to happen. I had the best off-season I’ve ever had and put in a lot of work with the team and made a lot of progress for myself and the bike. So, I feel like we came into A1 ready and I didn’t want to put pressure on myself, but I felt like I could be up here. I know a lot of guys are hurt right now, but I feel like it’s realistic for myself to believe I should be up here.”

It was not only a big night for Tickle, but also his team. There was concern all off-season that the team, which had just won the 450 Lucas Oil Pro Motocross title with Ken Roczen, may not even go racing this year. They were able to put the deal together, and nine rounds later they have helped Tickle reach the podium for the first time in his career.

It was a night of what ifs for Rocky Mountain ATV/MC-WPS-KTM’s Blake Baggett. A week after leading the team to its first ever 450SX podium, Baggett was in prime position to grab another one. After Tomac passed him early for the lead, he held his position and stayed within striking distance. His first mistake of the night came early, when he went down after the sand section. While he lost a couple positions, he found himself in podium contention late the race before going down again. He finished fifth, but the potential was there for a podium.

Like Dungey, Chad Reed’s night came down to the start. The veteran was buried from the beginning. He was able to pick his way through the field to score fourth, his best finish since a podium at Glendale.

Sometimes it takes getting the first one out of the way for a rider to start clicking off wins. It certainly holds true in the case of Zach Osborne, the Rockstar Energy Husqvarna rider claimed his first career 250SX victory a week ago in Atlanta, and backing it up with another tonight to take a 12-point lead into round four of the East Region championship next weekend. It was a hard fought win for Osborne, who was behind early leader Dylan Ferrandis and title rival Joey Savatgy. Osborne was patient in his approach, until he needed to attack when Savatgy, after a few attempts, took over the lead from Ferrandis. Within a few corners, Osborne made an aggressive move to also get around Ferrandis.

“I saw Ferrandis was in the lead from the start and I knew I need to stay in contact with Joey there at the beginning because he was jumping the quad and I hadn’t jumped it all day.”

Once Osborne made his way past Savatgy, he began to stretch his lead and it looked like Savatgy had settled in to second. But late in the race, he made a big mistake in the rhythm section and went down hard. He was able to remount, but went down again on the final lap when he tried to make a pass on Ferrandis. He would finish sixth, his worst result of the young season.

“I just came up a little short on the quad and was also a little bit too close to the Tuff Block, so a combination of casing the jump and hitting the Tuff Block just sucked the momentum out of it and down we went,” he told us after the race.

In 2014, his rookie season, Adam Cianciarulo entered Toronto with a ton of momentum and the points lead. That night he sustained a shoulder injury and missed the remainder of the season. No one could have foreshadowed the following two years, which were clouded with injuries, AC missing all of supercross both seasons. Perhaps it’s fitting that he returned to the podium here. He told us after the race he still hasn’t watched that crash, and that he’s tried to block it out. Its been a long road back for the Monster Energy/Pro Circuit Kawasaki rider, but it all came together tonight with a second place finish, his first podium since that 2014 season.

“I’ve been through so much since then,” he told us of that night in 2014. “I’m about a foot taller, my mentality has changed—just as a kid, as an adult, as you grow older, at this age you change, you adapt, and I’ve done that three or four times since the last time I was here.”

Yamalube/Star Racing Yamaha’s Colt Nichols, who told us after the race he’s lucky to even be racing after breaking his femur in November, was challenging for a podium position when he went down in the tricky rhythm section that caused problems for riders all night. He would rebound to finish fourth behind GEICO Honda’s Christian Craig, who found the podium for the first time all season after missing last weekend with a concussion.

“This is kind of like the first round for me,” he said. “The first two rounds were kind of garbage and I didn’t even race last week. Something to build off of. I wasn’t the best [tonight]. There were a lot of other better riders than me. Colt and Savatgy were ahead and I kind of got lucky with them falling.”

Solid night for rookie Dylan Ferrandis, who led the first four laps before being passed by Savatgy and Osborne. Ferrandis would fall shortly after being passed for the lead, but he rebounded to finish fifth.