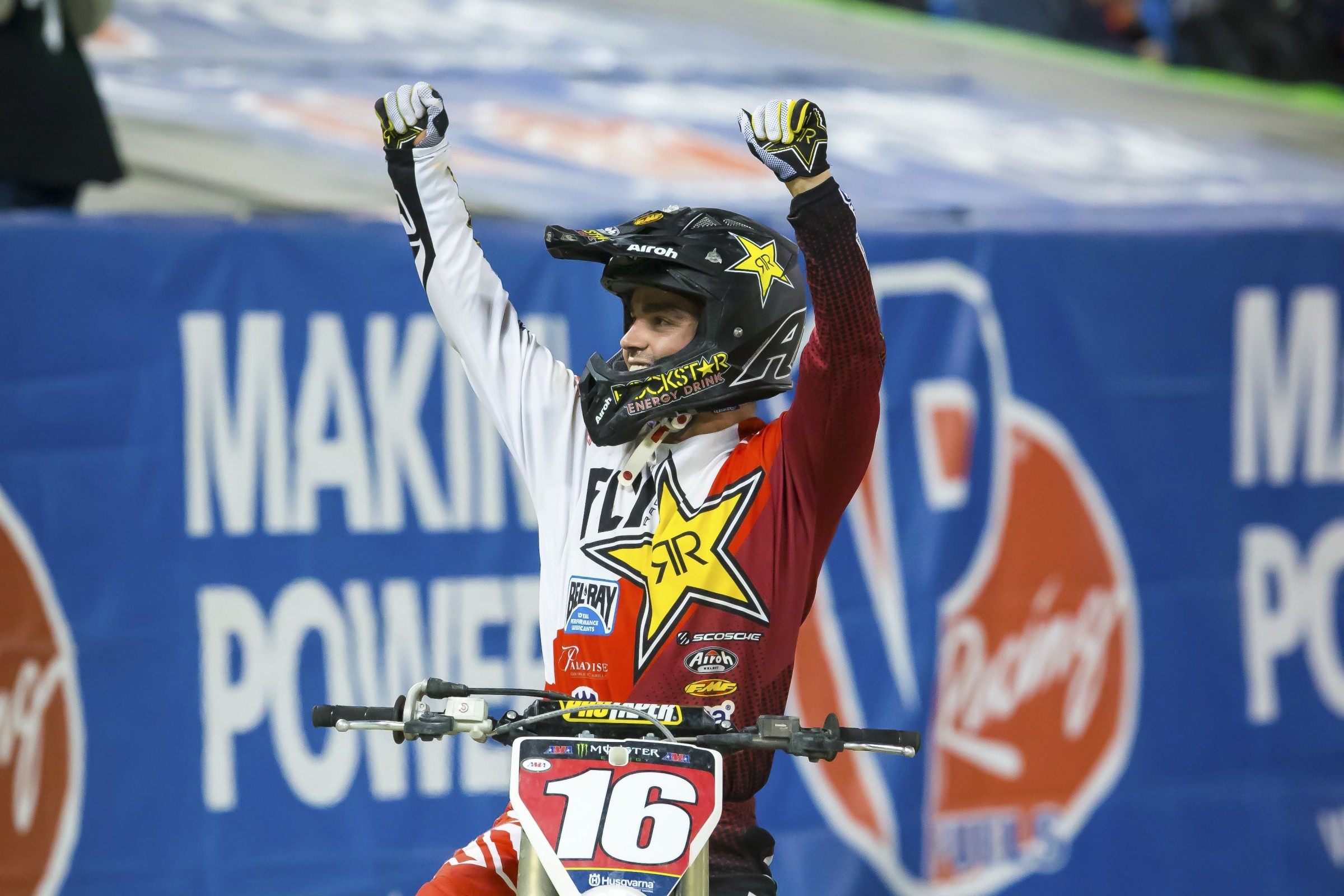 It was a huge night for Rockstar Energy Husqvarna’s Zach Osborne in Toronto on Saturday. Not only did the 250 veteran get his second win of the season, he also picked up a ton of points on title rival Joey Savatgy after Savatgy went down twice late in the race. He now holds a 12-point lead entering Daytona.

Monster Energy/Pro Circuit Kawasaki’s Adam Cianciarulo has missed the last two seasons of supercross due to injury. In Toronto, Cianciarulo rode a strong race to claim second, his first podium since 2014.

GEICO Honda’s Christian Craig returned from a concussion sustained in Atlanta, and picked up his first podium of the 2017 season.

All three riders spoke to the media after the race.

Racer X: Christian, congratulations on the podium. Two rough weekends I know to start the season, probably not happy about that but a big bounce-back ride here. Joey Savatgy, Colt Nichols went down in that rhythm section. How difficult was that later in the race with the ruts in the rhythm section?
Christian Craig: Yeah, the track was beat down. This was kind of like the first round for me. The first two rounds were kind of garbage. I didn’t even race last week. Something to build off of. I wasn’t the best. There were a lot of other better riders than me. Colt and Savatgy and all them were ahead. I kind of got lucky with them falling, but I’ll take it. It’s something to build off of. Finally got a race under my belt.

Adam, congratulations. Sure it feels good to be up here. You won your heat race in Atlanta, which I’m sure was a good step in building confidence and then the second place tonight. How close are you to being at full strength, and maybe what’s the missing piece that’s holding you back from being at the next step on the podium?
Adam Cianciarulo: I think I’m at full strength now. I had a good off-season. For me it’s been three years since I’ve been competitive racing supercross. So I think for me it’s just about time, getting laps under my belt, getting starts under my belt. I think the first couple races, even tonight a little bit, I was kind of riding not to lose instead of riding to win, and not riding to my capability. It’s just kind of in my own head a little bit. But I think with time that will get better. I wasn’t the greatest tonight. I didn’t ride to my potential, I don’t think. I got lucky as well with Joey crashing. Colt was on me there as well. But like Christian said, I’ll take it. It’s something to build off of and hopefully turn it into a couple wins and be right there in the championship at the end.

Zach, congratulations on another win. I was paying attention pretty closely in the main. You seemed to start out pretty patient, and then right around five minutes in Joey made the pass for the lead and I noticed your intensity kind of rise. Did it take a while to get going or was there some sense of urgency once he got in the lead?
Zach Osborne: I saw [Dylan] Ferrandis was in the lead from the start and I knew I was third and I needed to kind of stay in contact with Joey there at the beginning because he was jumping the quad. I hadn’t jumped it all day. I kind of considered jumping it a couple times in the main and just never went for it. I don’t really know why. But they were banging on each other pretty hard. I was kind of trying to figure myself out with the whoops whether I wanted to jump or skim. The jump thing was working pretty good and I was kind of staying in contact. They were still banging on each other. As soon as Joey made the pass, I knew he was going to make a run for it. I knew if he got that quad on me a couple times it would be tough to beat him. So I made a pretty hard pass on Ferrandis and got into second and then kind of just rode my race to get back up to him. Then he made a big mistake on the dragon and I was able to capitalize and go away.

Christian, obviously like you had mentioned the first two were almost throwaway rounds for you. How do your goals change going from overall season goals to almost like a week-to-week thing?
Craig: After last weekend not even getting into a qualifier and hitting my head, sitting down with my trainer DV [David Vuillemin] we talked and it’s like, let’s just go race to race and go for podiums and go for wins. I’m out of the points chase now and it’s unfortunate because I’ve been working so hard. To have two rounds like that is terrible. I have no excuses. I rode bad and made mistakes. Now we just take it week by week and try to get better. It’s nice to start off with this, though.

Zach, you’ve been in the 250 class now, it’s been a while. It’s been about 10 years to get you to that top step. What’s changed in the past two seasons for you? We’ve really kind of seen you come into your own as a rider.
Osborne: Mainly confidence, it’s just been a big building process. I was away from supercross for five years in my young career. This is my fifth season back, and that’s sort of the real start of I feel like my supercross career. Just the last two years have been a big building process for me. To get a win last weekend was a big step, and even the win in the outdoors was pretty big for me. It took me a long time to get where I’m at and I can’t explain why it wasn’t as successful as it maybe should have been or whatever in the beginning. I’m just taking it day to day now and trying to carry the momentum that I’ve built in the last few weeks and just do my own thing.

Adam, you had a few years ago here the shoulder injury, then you had a pretty hard crash in practice. Were you starting to have a little flashback from Toronto?
Cianciarulo: No, I think I was a little bit more fragile back then. I’ve taken a couple crashes so far this season. A couple just weird things happened. I went down at Minneapolis and again today in the whoops. I felt really good in the whoops and Christian and I were talking about it earlier—we were hitting that right side and I was trying to stay tucked through the Tuff Blocks as much as I could. I just kind of slid into the main line and it kind of high-sided me, but that’s kind of the risk you take when you go in that fast. But as far as my body and strength and all that, I feel like it’s come a long way. Even after that crash I was talking to the team and I was kind of stoked because you get a little sore, a bruise here, a bruise there, but I feel really strong, really solid. I think that’s kind of how you have to be to be competitive with these guys. I’m glad I’ve gotten to that point.

Christian, any lingering effects from last weekend?
Craig: No. I’ve had a lot of those questions with my head. I was just dizzy at first and the medics saw that and they kind of called it right there to pull me. I remember everything. It wasn’t like I was unconscious. Just a bummer the way I landed. I landed face first and had a good little cut on my nose. It’s funny because I was fine in those whoops all day and that was kind of like my strongpoint, and then just one little mistake and I ended up on my head. Bummer for sure, just the way I’ve been riding is so good and I belong up front.

Christian and Adam, there in the middle to late stages of the main event you guys were pretty much on your own. The leaders had a pretty good gap on you guys and you were both just cruising. When you did finally get into the podium spots, did you change anything at all? Did you change the pace and ratchet it up, or were you like, this has worked until now let’s just cruise it home?
Craig: First of all, I locked up by about lap eight. I rode terrible, but that’s just me. I haven’t rode a track that bad in a while. Once I saw I was in third I knew Colt was coming. He just came off a crash and I saw him coming and I pretty much stayed the same speed. Nothing changed. It wasn’t the fastest and it wasn’t the slowest, just consistent. Rode my lines. Just rode my laps out.

Cianciarulo: I think for me I tried adapting as the race went on. The track was breaking down. It wasn’t really working for me. I was struggling with my corners today, just kind of being able to turn down, especially that last rhythm lane getting that three out of the corner clean and getting that next three. I struggled with that and when Colt was behind me he was nailing that and pulling right up on me every time. At a certain point I just kept doing the same thing and I was just going to ride that pace and hopefully the guys behind me were going to get tired. That was kind of my game plan at a certain point. Joey made a mistake—not glad about that, but glad we ended up second with what I thought was kind of a sub-par performance.

Zach, 12 hours ago you leaped out onto the surface out there and charged that track [in practice]. Twelve hours later you were kind of picking your way through it. Take us through kind of dissecting the track throughout the day because it really changed.
Osborne: We could tell as soon as we went on the track walk that it was going to be the way it was in the night show, just broken down and more like a survival race and jumping the jumps and making sure you’re clean every lap rather than burning heaters for 20 minutes. For me, it was kind of just another day. It’s gnarly at the tracks we ride with the 450 guys every day. It breaks down. I think that that’s really helped me this year with bike setup and confidence when it gets the worst in the main. I think that that’s been one of the biggest benefits to being there.