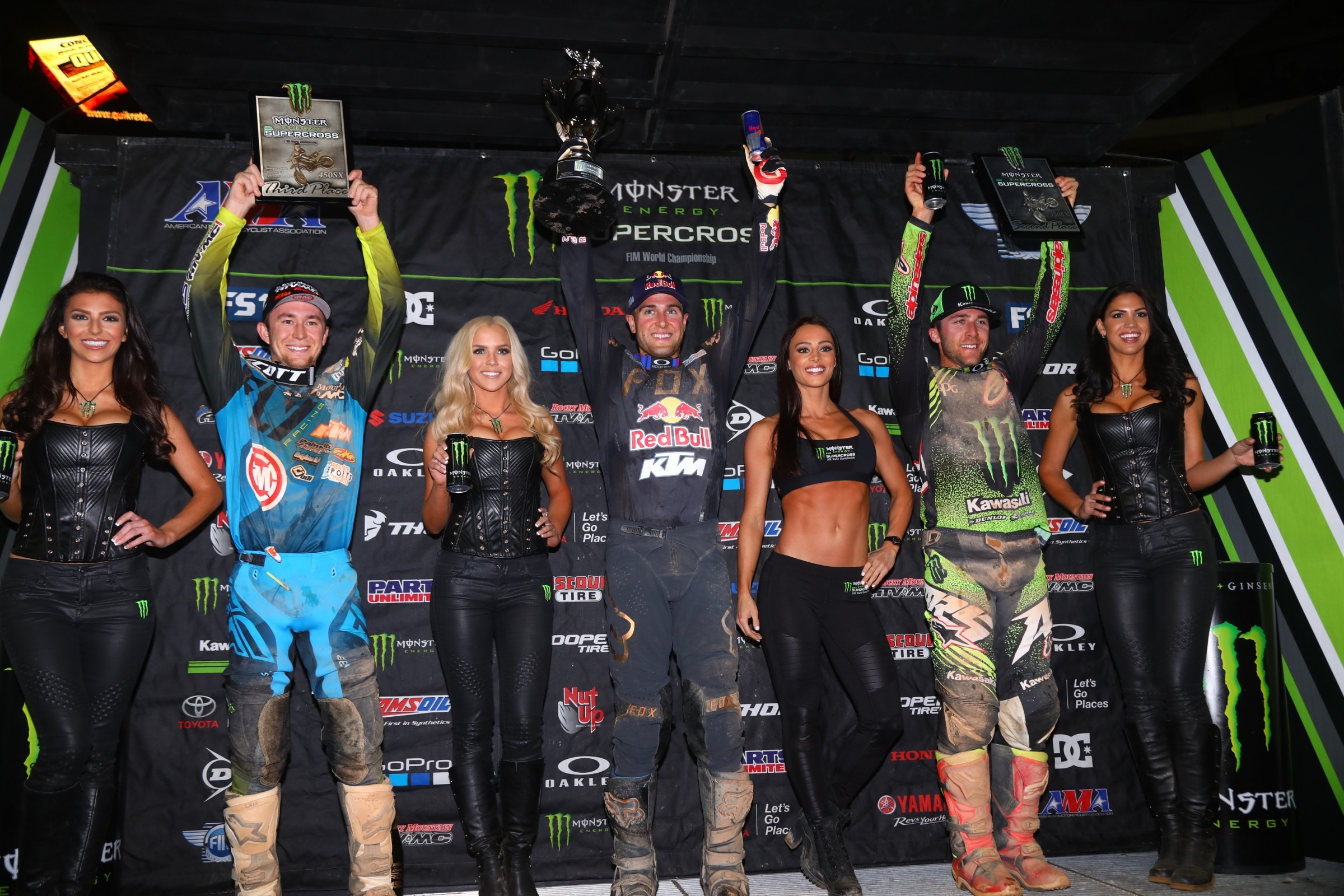 Ryan Dungey rode to his second win of 2017 and extended his points lead further at round eight of Monster Energy Supercross last night in Atlanta.

Monster Energy Kawasaki’s Eli Tomac made a late charge to try and catch Dungey, but ran out of time. His second place finish is his fourth podium in the last five races.

Racer X: Blake, third place, podium. Got a heat race win. Eight rounds in. There was a lot of talk pre-season about your speed, but you put it together tonight. What was the difference tonight?
Blake Baggett: I don’t know if I have that answer. Speed doesn’t do you any good if you’re crashing or [get] a bad start, so I guess I would have to go with good starts. Kept it on two wheels and felt comfortable all night. Track was pretty much like we practice on in Florida. The dirt was awesome. Each week gets better and better feeling on the bike and comfortable with the team. We’re just plugging away.

Eli Tomac, the charge was real. You were about ninth place. You just kept coming. The sand got you in the face. We saw you pull the tear-off on the super slow-mo. Tell us about coming through the field.
Eli Tomac: Yeah, a little bit of a tough night, not getting out of the heat race obviously where we wanted to be, and then even getting second place in the semi. So went to the main event and did what we could. Didn’t get the greatest of starts, but no excuses there. Just got beat tonight. It was a tough track with the sand, with the wall. We were down to the concrete again. And even the whoops themselves—the whoops were one of toughest, most technical sets we’ve had all year. When we did walk the track they didn’t look huge, but the way the clay was and the way the spacing was they ended up being really tough. Tough track, for sure.

Ryan Dungey, big victory. Your points lead now is 25. You get the heat race win. You get the holeshot. They call it points racing—you got them all. I just wanted to say, it looks like your riding tonight looked like it was more comfortable. Did you guys find anything on the bike this week?
Ryan Dungey: Yeah, little things, little bits and pieces. Nothing crazy. It was actually good. Got back to Florida. Kind of my first full week where I got to kind of chill out, so it was nice. That always helps. I got to ride with the guys at the track. It was nice. Things kind of slowed down a little bit for a change. But tonight the changes that we made during the week really related to the night and benefited us. That was nice. It doesn’t always happen like that. But like Eli said, the track was gone. It was like he said last weekend, it was like survival. It was pretty nasty and rough. It was nice to get out front and open a little bit of a gap. Then I seen where Eli was and just tried to manage it and hit my marks and get a win. So it was nice.

Any of you guys can answer. In your wish list for future tracks, is a wall jump followed by a sand section going to be on the list?
Dungey: That was pretty nasty.

Tomac: That was just ridiculous. Even the wall jumps themselves, I think with the timed events now there’s really no reason for them. Why are we getting slowed down? And a wall? It’s a wall. I think about every rider would say they don’t like them at all. The sand too. The sand is cool, but with the wall there … I don’t want to sound like a whiner, but it was kind of dumb.

Dungey: Yeah, it would have been better it we were doubling into the sand. You seen a guy roll over the top, and a lapper, he don’t know.

Baggett: I couldn’t even see half the time when I went over it either, if there was somebody in front of you.

Dungey: It is like outdoors. It was crazy. I’ve still got sand everywhere.

When it does get down to the concrete is anything you guys can do to adjust or do you just find edges or move around?
Dungey: That was interesting. It was coming across the mechanics into the left-hand turn. I never changed my line because there was no rut to sit in so I just kept taking the line. I could feel my tire spinning but once I got through it.... There was some shallow spots out there, for sure. But that’s how it is. Eighteen laps the 250s do. We’re doing 24 I think. It’s just a lot. If you take 20 more riders and every lap is times 20, that’s 20 more passes. So like last week there was 26 laps, that’s 120 more passes, just us. They had 19 laps, the 250s, that’s another hundred passes. So the tracks are breaking down a lot. I feel like we need more time to do a little more fixing. We were going through the whoops and we were skimming them all day and then we’re jumping them at the end. There’s not enough time to do any work. The tracks, it’s nasty. It really is, but it’s racing.

Have you had to almost change the way you ride because the tracks are breaking down? Does it almost change the way you manage the last few laps of a race?
Dungey: A little bit. It’s not so get out front and try to find a smooth line. Sometimes like the first few races I’m searching for a smooth line and there’s not one. I kind of learned a little last week being behind Eli. Whatever line he’s in he just mashes it. It doesn’t matter. Quit looking for a smooth line, because there’s not one. Just get out and wherever you’re at … and I searched around a little bit—I think we all try to find the best line, and sometimes you don’t find the best line. But at least you know what you’re going into. You’re really trying to hunker down and go, even if it’s rough.

Ryan, it’s been a little while since you had a win this season. Eli’s had some pretty good momentum going I believe the last three of four. How important was it for you right around the halfway mark to kind of halt his momentum and get another win?
Dungey: Yeah, these guys are going good, all year. Then Marvin [Musquin] gets a win there. The intensity’s there. If you look at the lap times, Eli’s had us good on the practice times by a little here and there, but it’s tenths separating us. So the tracks are really relatively basic. Not necessarily a bad thing, it just makes for close racing. So it’s really hard to get that break away. You have a tough go here and there. We got a bad start in Dallas and we got fourth still, so it wasn’t like they were disastrous races, they were just a little bit off the front. You try to adjust. These guys almost better you. They’re competitors but they challenge you to be better, so try to take it in a positive feedback. But last week was tough to accept, but it’s like, what am I going to do? You’re either going to go forward and move forward and give it your best or you’re going to sit and have a pity party. So we choose to move forward.

Blake, it’s been a little while since we’ve seen you up on the podium. What does this do for you and kind of your mental state and mindset going into further rounds? We’ve seen you have the speed and we see you back up on the podium.
Baggett: It’s been a while. We’ve rode past the podium a lot recently for quite a while now. It’s really good to actually get back up there. Each weekend just keeps getting better and better, feeling more comfortable on the bike. I’ve been able to put lap times together up there finally on the board. Most of the time I never even dreamed of hitting the board, so up on the board during the practice. Making it through heat races, actually getting to race Ryan Dungey and Eli and getting up there. To get a good start tonight and be up on the podium is definitely something to build off of. I’m just enjoying myself and the team and trying to be better each weekend.

Blake, not too many people get up on the 450 podium. It’s pretty special. A lot of people claim you to be an outdoor specialist. Do you have anything to say to them after this podium?
Baggett: I felt pretty comfy in the sand section. It was good. This year I’ve been definitely a lot better supercross guy. Before I didn’t even care for the supercross series and now I actually like it. I’ve been really good in the whoops. That’s been my strong point for some reason even though I’ve got no legs. So I’ve been good there but each weekend it’s just been a goat trail, follow-the-leader through them by the end of the night, so skimming them does you no good. Definitely feeling more comfortable and ready for next weekend.

Blake, talk about your team. They’ve never actually gotten a podium at this level. I think that’s something they thought about. They realized that. That was a goal for you or Davi [Millsaps] to get it this year. So what was the reaction like when you finally got up there for them?
Baggett: Forrest [Butler, team owner] might have put out a tear or two. He acts like a tough guy but he’s just a big teddy bear. He’s got a soft side for me.

Did you notice Anderson was getting close there at the end? Did you battle him on the last lap? I think he made a mistake. Did he get to you? Did you know he was there?
Baggett: I could feel him. I could feel the #21. He was coming and I was holding my breath trying to not make mistakes. Definitely, we battled all through amateurs, just like me and Eli battled. I knew he was coming and I was just trying to hit my marks and not make mistakes. He went for it, just like I would have. So he went for it and slid out, but definitely when he did that I had a sigh of relief for the last two sections.

Blake, he pulled up next to you after the finish line. What’d he have to say there?
Baggett: Normally we’re screaming at each other or it’s not very nice words, so it was actually different for a change. He races tough. If you’re in his way he’s not scared to just blast you and take himself down with you. It was cool that he went for it and didn’t make it happen and afterwards he said good job and congratulations. That’s what true racers do. I like to race the guy. Sometimes it gets dirty, but it’s all fun and games.