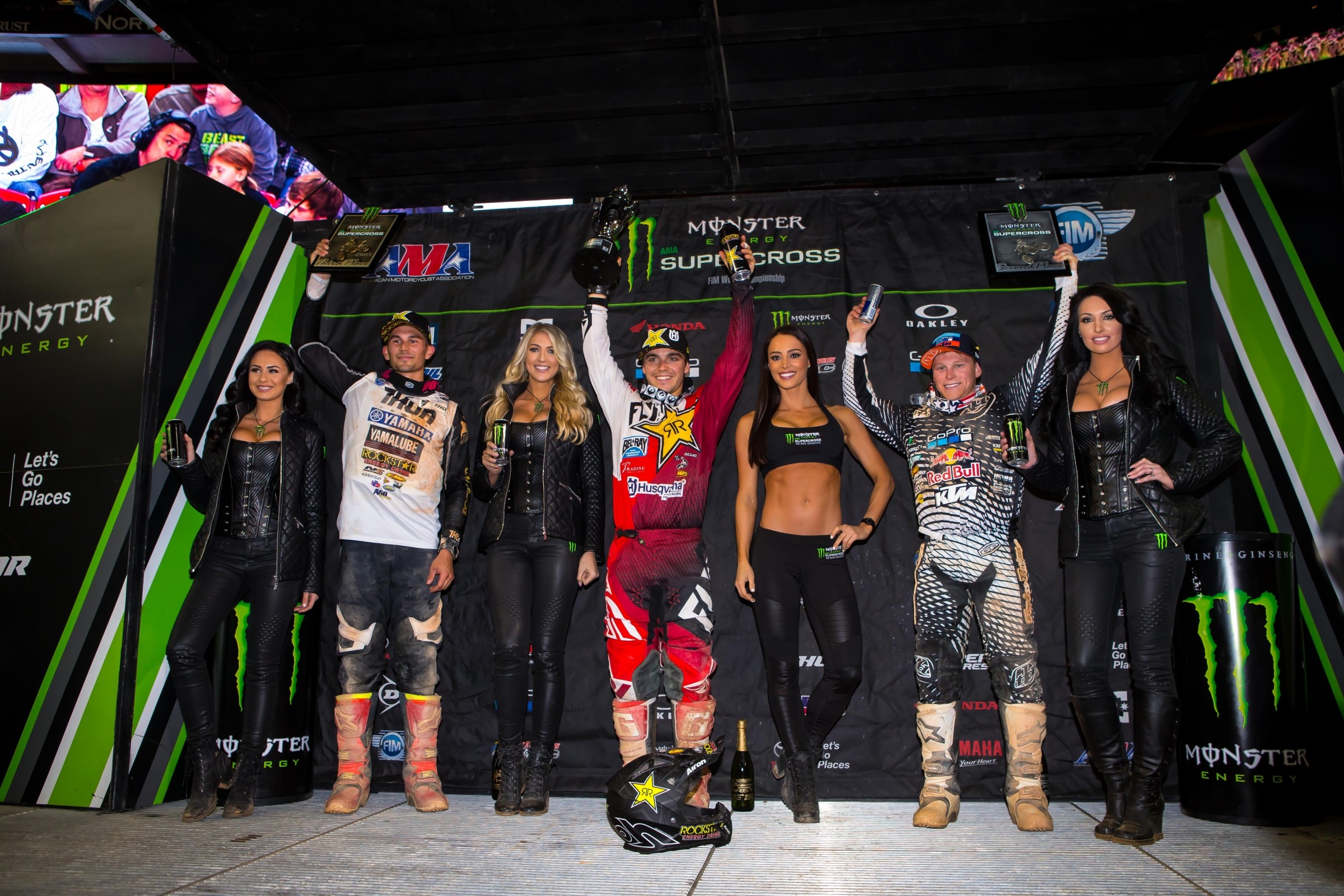 Racer X: Colt, you were on your way to a good finish last weekend. You had a crazy crash, but a decent start tonight. You kept the hammer down, kept charging. You land on the podium. A podium finish in your second race back after a big injury has to feel amazing.
Colt Nichols: Yeah, it actually really does. It’s just nice to actually get the ball rolling now in the right direction. After last weekend I was very bummed because I got a really good start and didn’t end up too well. But overall third place on the night, after the injury we had and everything it’s a blessing just to be up here with these guys.

Alex Martin, a great bounce back from the DNF last weekend. You land on the podium. Had some tight racing with your teammate there. Take us through that a little bit.
Alex Martin: Yeah, that was pretty intense for a little bit there. It was pretty cool. We started off one and two and we were battling. I kind of noticed he started making little mistakes towards the end there. We were second and third. Zach [Osborne] was out front for a while. Then he made a little mistake over there on the on-off. Then I just kind of came around the outside and did the on-off, and when we came to the inside we basically kind of collided there and unfortunately I sent him over. Luckily he kept it on two wheels and I was able to keep it on two wheels and make it up to second.

Zach, like we said 49 swings at it. You go out there, second race into the championship. You rode great last weekend, but tonight you couldn’t be stopped. You get your first career victory in the last race here at the Georgia Dome. It has to be extra, extra special.
Zach Osborne: Yeah, it’s pretty unreal. I feel like I squandered a good opportunity last weekend. I watched that race about 50 times this week and just shook my head. It’s amazing to come here. I won the KJSC here in 1998. It’s been a dream of mine ever since to win this race, and for it to be the last race in Georgia Dome … I could go on for an hour but it’s unreal. I’m grateful to be in this position to have this opportunity and just be where I’m at. It’s unreal.

Alex, how important was it to bounce back last week? I’m sure it was about as bad as the opener could have gone and then it’s kind of hard when you don’t have the ball rolling in the first race, so how good does this feel?
Martin: Yeah, I’m not going to lie, that was a tough pill to swallow. I felt decent all day and had a great off-season and just looking to put a stamp on the season and I crashed first turn and made it a lap and crashed on the dragon’s back. I was hurting. Two laps in and I was done. It was tough. To be in front of the hometown crowd, there’s so many people there that you know. That was really tough to kind of walk back to the pits and know you basically DNF’d. But at the same time, on Sunday I woke up and I was like, hey, we got eight more races left, 200 points on the table. I’ve just been feeling way too good in the off-season on the bike and getting along with the team. I’m just really excited to put a stamp like I did, and honestly to go second tonight really feels good after last weekend.

Zach, congratulations. First overall supercross win. Can you take us through what was going through your mind that last lap? How surreal was it?
Osborne: Yeah, with three or four to go I felt pretty comfortable with my gap. There weren’t a lot of lappers in-between me and the finish line. Just to go around the last lap I kind of took it easy. I can’t really put it into words. It was unreal. It’s still unreal right now. It’s a blessing to have the opportunity.

A lot of guys nowadays don’t seem to celebrate too early but you were throwing fist pumps over the triple and everything.
Osborne: The triple I only had one whoops section left, which may have been the sketchiest part of the whole track but I went for it anyways.

Talk about those whoops a little bit. I think both Alex and Zach, I watched you guys struggle a little bit with those in practice.
Osborne: Yeah. In the first practice I felt really good in them. In the second practice I felt garbage in them. I made a couple of adjustments and just tried to get something going. I felt like in the back of my mind that before the end of the night it would definitely be that we were jumping through them. So I tried to kind of dial that in the last practice. I wasn’t the fastest, but I knew that I could do everything that I was doing the whole time and do it good. I felt like that was the key. I knew that I could have maybe skimmed them four or five times but was it worth the risk or whatever? So I just felt like it was better and more consistent to do the jumping.

At one point you were gone. You were living in England. You were at the GPs. You kind of put it upon yourself to put a supercross program together to show that you could do this. Can you talk about the dream of “I have to get back to supercross? I have to show that I can do this and get on an American team again?”
Osborne: Yeah, that year at the end of 2011 I actually had a deal lined up with Rockstar Suzuki at the time, which is the same team that I’ve ended up on now. But I told my boss I want to eventually go back to America and this is a perfect opportunity. It’s a good team. I told him I have to take it. He was super bummed obviously. We came to the agreement that if I would stay and do one more year in the Grand Prix that he would bring me for four races to kind of showcase my skills and then we could go back and race Grand Prix. So we did that, and it’s been a long road from there to here. I didn’t really think about it, but when you mention it, it’s been a while.

Were you kind of betting on yourself? You hadn’t raced supercross in a couple years and you had four races to basically show that you were still able to do this.
Osborne: Looking back, yeah, it was a bigger gamble than what I had realized at the time. It could have gone bad easily. I was on a completely private bike that we built in my garage in South Carolina. It could have easily gone the other way. Looking back now, it was a big gamble. Honestly at that time I didn’t even consider it a gamble. I just knew we were going racing and that’s what I wanted to do. Maybe young and dumb in that situation.

Zach, first time I believe for you running the red plates over here. How cool is it going to be to see that on your bike next weekend?
Osborne: Awesome. I haven’t had red plates on my bike since 2012 in the British Championship. It’s going to be a big week and I’m super pumped with it.