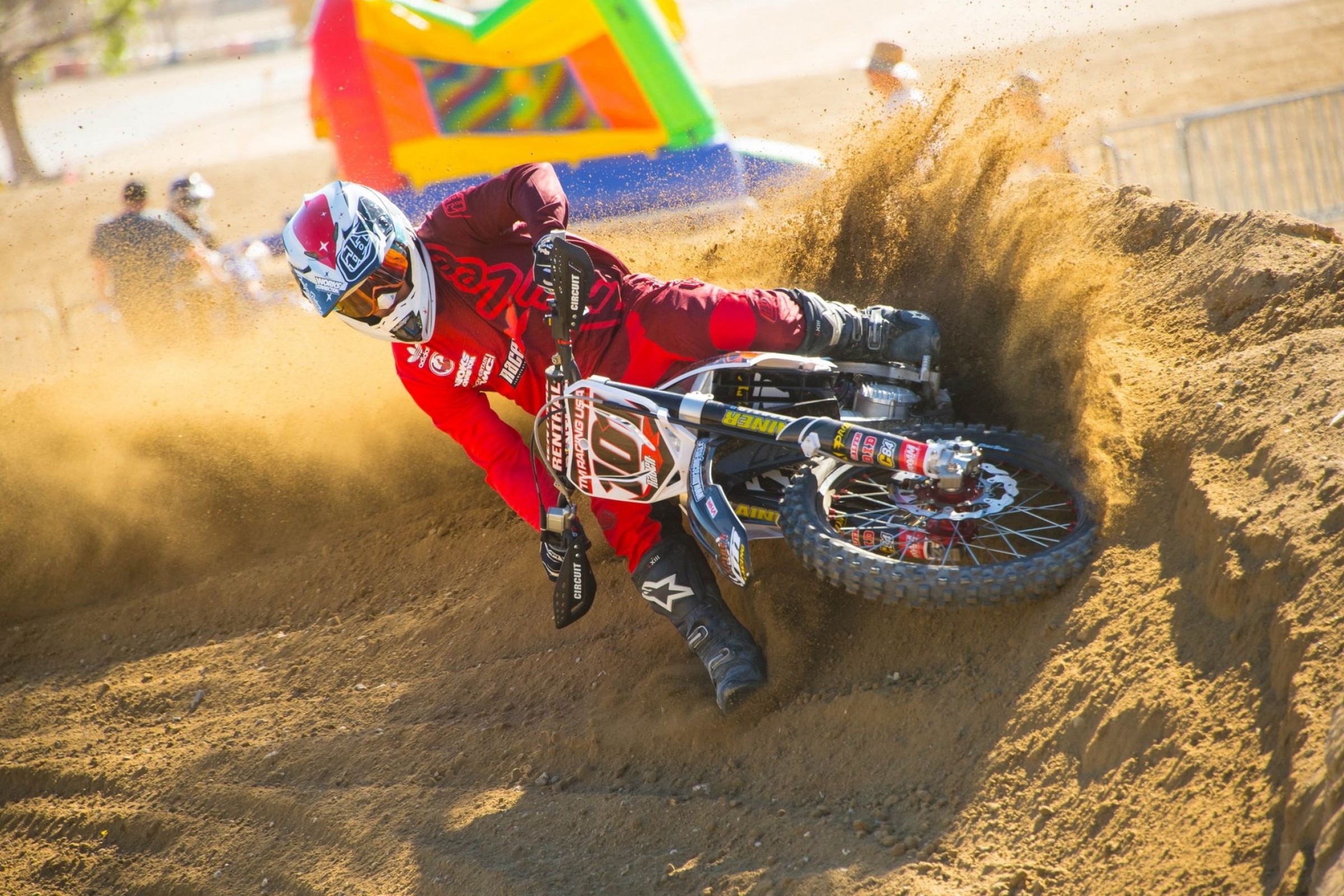 I have been thinking about this a lot recently. You keep hearing everyone say, “Oh, Dungey is one of the greatest of all time,” which his stats on paper does show that. He is genuinely one of the greatest motocross/supercross racers of all time. But to compare him to people who were before his time gets sketchy to me. Trying to compare people that raced in the ‘80’s, to the MC days, to the RC days then the RV days is just about impossible. RC has never raced Bob Hannah. James Stewart never raced MC. So on and so forth. You have these “GREATS” that have never raced each other, but you still try to compare them. I know there is no actual need to compare them, but why is there never a story on Racer X comparing lap times of these greats? A lot of the national tracks are the same, so you could compare their times there. Also, these track designers are starting to have a hard time thinking of new stuff for the supercross races so why not just re-do the same tracks from say, 2000, or any other year? I understand that no one wants to ride the same thing over and over again, but if you are using tracks from, say the late ‘90’s, or early 2000’s none of these guys have even raced on one of those tracks. I feel like that would be a lot of fun because then you can look back at races and say, well, this race back in 2001 was fantastic, offered a lot of passing and all the riders liked that track. Furthermore if you did that you could start to compare lap times of the riders in their prime at that point to the riders in their prime now. That way you would get a legit comparison of two riders rather than just stats. My main thinking on this was, yes, MC was unbeatable. BUT the only person that was anywhere near his level was Jeff Emig. What if RC was 6 years older? Would we have seen the complete dominance in the 90s that we did? I feel like by the time RC beat Jeremy he was out of his prime. So, is there any way to compare two people in their prime from different decades without just looking at their stats?

You’re all over the map here. First of all, each rider from each era faces his own set of circumstances and competition. Larry Ward finished second in the supercross championship a couple of times in the 1990s so does that mean Jeremy McGrath had it easy? You could argue since Larry only won a few supercrosses and never won a title that he wasn’t much of a challenge. But Jeremy dealt with Jeff Stanton, Damon Bradshaw, Jean-Michel Bayle, Kevin Windham, Ezra Lusk, and plenty of other iconic riders in the sport. There is always competition at that level. Comparing riders, or any athletes, from one era to another is tough. Stats are used because they are the only tangible thing you can use to compare one rider against another. How many podiums? How many race wins? How many titles? Those are the things you can look at to draw comparisons. What you can’t see on a stat sheet is riding style, riding ability, personality, professionalism, media savvy, and fan interaction. I think all of those things make a huge impact on a rider’s popularity and his impact on the sport.

The idea to compare lap times from tracks is ridiculous because, although the layouts are similar, they are not the same. And even if they were, the prep and conditions are different so it wouldn’t be apples-to-apples. But mostly, you can’t compare a 250 two-stroke to a 450 because they are two completely different sized bikes. You’ll never get a definitive answer about which generation was best, and that’s okay. As long as we can all agree that this is an incredible sport it just gives us more to bench race about.

For most my adult riding life, I’ve heard people preach that you never go ride a new bike after leaving the dealership. You should instead drive straight home and disassemble a brand new bike that some smart Japanese person just put together for you and grease every bushing and linkage, head set etc. I just have a hard time thinking that the smart Japanese fellow who designed and built my new bike would not use the maximum amount of grease for each application on my new bike. Your thoughts on “the tear a brand new bike down before you ever ride it” theory?

People are idiots, Ben, and if you want to get any sleep at night you’re going to have to come to terms with that. When you buy a new car do you take it home and strip it down to the frame to grease the chassis? Do you pull a new laptop apart and throw a little extra solder on the motherboard? Do you peel the soles off a brand new pair of Adidas and slather on a new layer of shoe glue before you wear some new kicks. No. Unless you are a complete asshole you don’t do that. I’ve ridden hundreds of new bikes in the 38 years I’ve been riding motorcycles and I’ve never taken a new bike home and greased the linkage. I’ve had headsets that get notchy from a lot of use and power washing and I pull them apart and grease them at that point like a normal human being without a disorder that requires medication. That little Japanese man that built your bike could take a hit to the head with a sledge hammer and he would still be better at math than you or me. Hell, we call them the “Three Rs” [readin’, ritin’, and rithmatic] here in America, so that should give you an indication of how far off the path we’ve strayed, intellectually. Just go ride your bike and if you notice something squeaking then grease it. If you put 20 or 30 hours on it, grease it. It’s called common sense, Ben. Let’s all try to embrace that.

Your article is also my favorite reading over here in Hungary–although it comes on Friday evenings here. I am think about this a lot, and my question is why Feld is not expanding to overseas, or will they expand? NASCAR does with a EuroSeries, NFL has matches in the UK…looks like for a successful series is a natural next step to go worldwide–or at least pass the border. A lot of people are following SX here, you probably see that on the post clicks at Racerxonline. A race over here would pack a stadium with international crowd (fans all around Europe) easy. Especially if it is in a major city that is a cheap flight destination, like Milan for example.

You’re in luck my Hungarian pal! Feld is actually thinking about doing just that and bringing the show to Europe. A round in Milano! Imagine it: Girls in high heels, guys wearing V-necks, smoking and drinking ridiculously small cups of coffee … and that’s just the crews in the pits! In all seriousness, they are looking at a globalization of supercross and I’m afraid it will be at the peril of the national motocross series here in the U.S. Riders and teams can’t race 24 round of supercross all over the world and then jump right into 12 rounds of Nationals with no break on either end. Something will have to give. Look, there are already a few off-season supercross rounds in Europe. Let’s leave it at that.