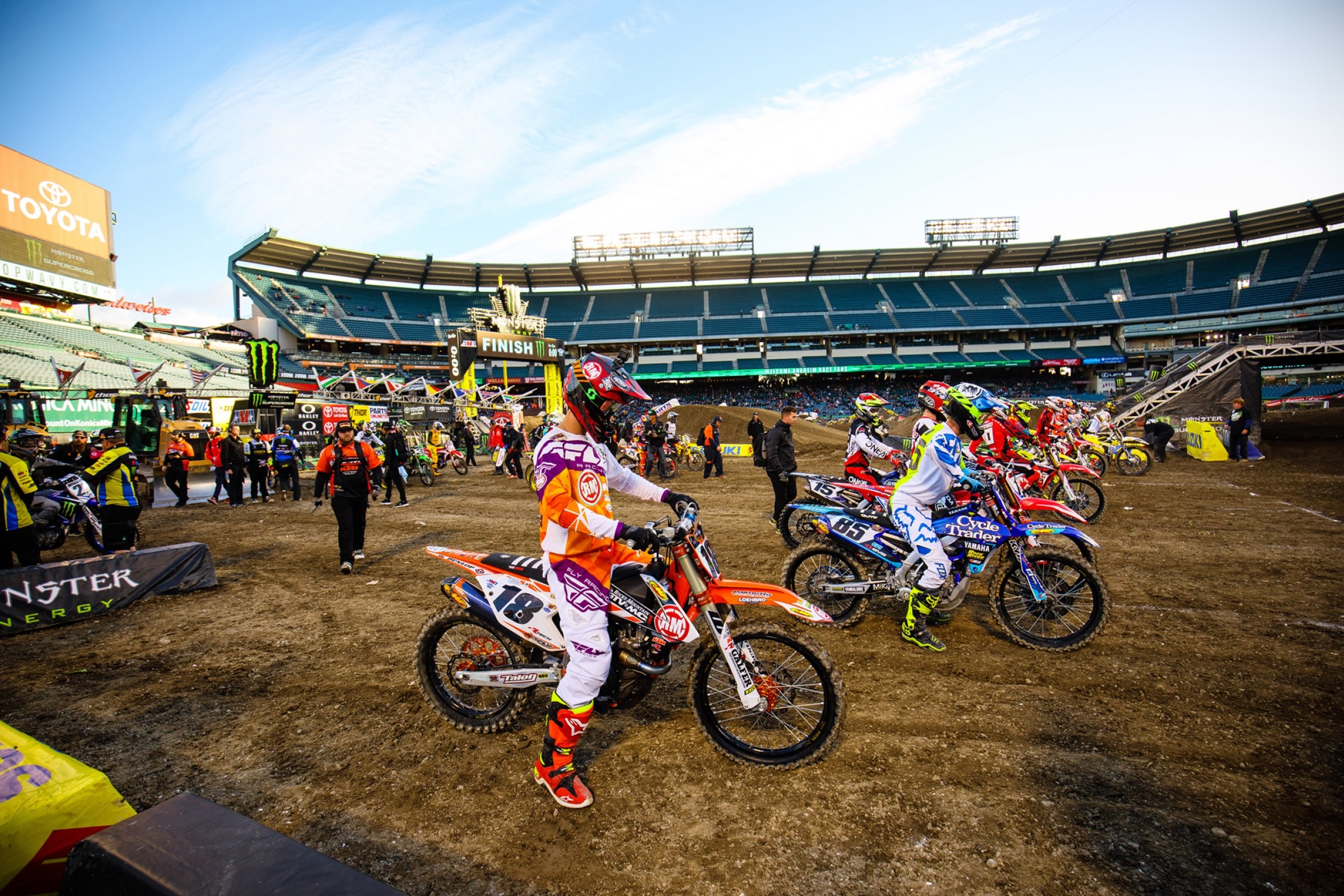 A few weeks ago, Feld Entertainment, promoters of Monster Energy Supercross, put together a presentation for the media and teams in what they called the “Digital Summit.” The goal of the presentation was to educate us on how the entire industry can work together to help promote and elevate the sport of supercross with the use of social media channels.They teamed up with HookIt, a marketing and commerce platform, to give us some real data to show how massive the reach some of these companies have. For example, Supercross Live has a social following of about 3.3 million followers across their platforms.

The summit ended up reaching far beyond just social media, though. Feld is rolling out a ton of new programs to help boost the popularity of the sport—but the real key is that if all of the stakeholders work together on these projects, they will be much more effective for everyone.

Feld also owns Ringling Bros. and Barnum & Bailey Circus. The circus has been running for more than 100 years, but Feld recently announced they will be closing their doors and will perform their last show in May of this year. Feld bought the circus in 1967, but in recent years, animal rights have become a more popular topic and with declining ticket sales and high operating costs, Feld has decided to move in a different direction.

What does this have to do with supercross? A lot, actually.

Feld also owns Monster Energy Supercross, AMSOIL Arenacross, Monster Jam, Universe Live, Disney on Ice, Disney Live, and the Ringling Bros. and Barnum & Bailey Center for Elephant Conservation. By shutting down the circus they are essentially cutting 1/8 of their business. All that time and energy that was being focused on promoting and growing the circus will be shifted toward promoting and growing supercross and arenacross.

You’ve probably heard these phrases before: We need to sell more bikes. We need to fill more seats in the stadiums. I wish motocross was more mainstream. Well, that’s exactly what Feld is trying to do.

Feld has made a big step by hiring a full-time media training director named Nonalee Davis, who supports all of Feld’s athletes and performers. As a media trainer, Nonalee has coached some of the biggest names in sports and entertainment on a one-on-one level to help improve their public image, presence on stage, and overall “polish” as she likes to say. Nonalee has worked with thousands of high profile athletes over the years ranging from the U.S. Speed Skating Team to the NFL, including Teddy Bridgewater, the current quarterback for the Minnesota Vikings. Some other football names she has worked with that you may recognize: Manti Te'o, Eddie Lacy, Jeremy Hill, Ryan Shazier, and De'andre Hopkins. With that kind of a resume, you know Feld isn’t messing around when they hired her.

I asked Nonalee what it was like working with the athletes in our sport compared to athletes in other sports. “They are delightfully humble,” she said. “You wouldn’t do this incredibly strategic and amazing sport that takes a lot of skill if you just wanted to ride. You do in front of thousands of people and you to it on TV. There is an aspect of them that are rock stars. My goal is to find that and tap into that. If you can tap into that, there is no stopping this sport.”

We will have a more in-depth interview with Nonalee next week. Suffice to say that when Feld invests in a media trainer for the riders, it helps not only supercross, but the riders and their teams and sponsors.

I also spoke with Sean Brennen, Feld Motor Sports’ public relations manager, about the digital summit and when I asked him about their thinking behind getting the industry folks together he said, “There is so much wealth in everyone cooperating and working together from a digital standpoint. All of the teams, the manufacturers, the independent riders. Really the digital summit was to get everybody in the same room and really talk about how we can work together rather than in silos.

“Everyone is using their social channels differently, but we can grow the audience if we’re all working together,” he continued. “This is one small initiative out of many that we are looking to expand in the next three to five years to grow this audience.”

What Sean is referring to specifically is how we can work together as brands to cross-promote each other. Tagging, reposting, and collaborating on projects together is only going to help everyone grow and then we can all enjoy the growth together. Sean supported this by saying, “Monster Energy Supercross, with their channels, have an exceptional reach. Racer X has an exceptional reach. Ken Roczen, Ryan Dungey … these guys have a million followers on their social channels, or very close. The reach is absolutely incredible. If we can compound that by us all sharing and telling the same story, it’s only going to increase everybody.”

This is one of many strategic initiatives that Feld is putting in place to help grow the sport. They also have a program they’ve started called “RIDE” that is designed to help get new riders to actually by dirt bikes. Their goal with the RIDE program is help to educate, instruct, and inspire the public who may not know much about dirt bikes and help make that transition easier. If a kid comes to a supercross with his or her parents, what would be the next step to actually giving riding a try? The RIDE program helps explain where to buy a bike, how to ride a bike, what gear you might need. Flyers with this info, including a listing of local dealerships and tracks near each supercross event, now get handed out every weekend. These is are all examples of how they’re trying to promote the sport as a whole.

Race Day Live announcer, Andy Bowyer, also presented at the Digital Summit and when I asked him what his thoughts were on this topic and what kind of reactions they got from their presentation he said it was all very positive and that everyone seems very responsive. He also said, “I’m super proud of the industry and how everyone comes together to help one another. You don’t find that in very many motorsports.”

If you’ve ever been to a supercross race then you know how hard the announcers push, “Make sure to hashtag #SXonFOX #SupercrossLive and #DropTheGate.” Well, it actually works. When the industry works together to put those tags in everything they do, the sport can unify itself and show the mainstream folks just how big this sport actually is. That’s going to make things better for everyone. See you at the races. #thisismoto