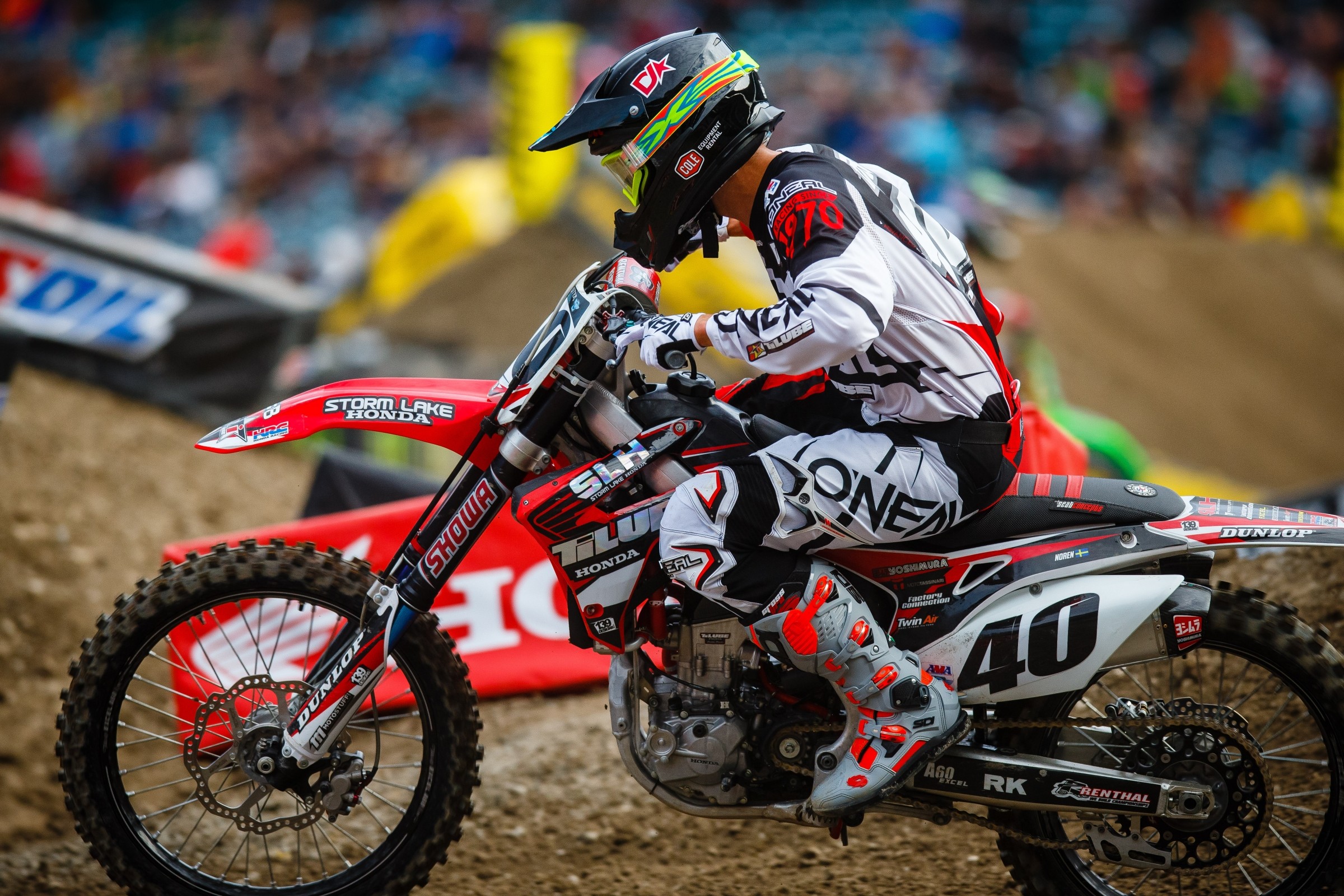 Growing up in Sweden, Fredrik Noren didn’t have any supercross experience before coming to the U.S., and his results reflected the fact that he is much more comfortable on an outdoor track compared to supercross. This year, Noren is feeling more prepared than ever after getting some experience on the West Coast racing his CRF250R against a class full of 450s.

We caught up with the TiLube/Storm Lake Honda rider to see how he is recovering from getting his tonsils taken out, how he feels he is adapting to supercross this year, and what it was like driving across the country in his home.

Racer X: So you had to get your tonsils removed a couple weeks ago. What was that like and how are you feeling now?
Fredrik Noren: I feel good. I’d say the first 10 days were pretty rough, as far as like eating … actually it was really rough. Like eating and that kind of stuff. I lost like eight pounds or something like that. We had a really good meal replacement plan, like shakes, legit ones, but still I was losing a lot of weight so I was feeling kind of low on energy. Once I started eating normal it got pretty good. Then we moved out to South of the Border motocross facility [in South Carolina] just now before I started riding again, which was nice. But yeah, I’ve been on the bike now for about 10 days training and everything so I feel good now. But the first 10 days were rough!

How long did it take you to figure out you needed to get your tonsils taken out? Was it kind of a surprise?
I’ve had some issues with my tonsils for a while and then we’re like, “Alright we need to make an appointment to go see a doctor,” and we called the doctor in like September but we couldn’t’ get in until January. So in January after A1 I saw a doctor and he’s like, “Yeah, you should probably take them out. I do surgeries every Tuesday.” So then I was planning on doing the first four rounds—West Coast 450—but then we’re like, “Alright let’s just do three rounds and then straight after A2 on Tuesday we’ll take the tonsils out so we can be ready for the East Coast,” because there wasn’t really no point for me racing that fourth round in Phoenix other than just experience. It’s better just to do it now, because if not I don’t know when else I would have taken them out. Because in between supercross and outdoors there’s no time, so it would be this fall. But I was like, “Ahhhh, I don’t wanna wait that long.” [Laughs]

Touching on the experience thing. Your results in supercross haven’t been as good as outdoors. What kind of impact did growing up in Sweden have on your supercross skills.
In Sweden there’s no supercross like whatsoever. You have like a couple one-time rounds throughout the year where high-name Americans would come to race, but if you’re a Swedish guy you don’t ride supercross. So coming here, like outdoors was just what I did when I first came, but growing up I would watch supercross over here and it was cool to see it. Once I got here I started thinking more about it to hopefully try to get to do it someday. Then in 2014 we started trying some more.

And Chase [Stallo] told me that they don’t really build any doubles or triples there either.
That’s true! It’s mainly tabletops. The outdoor tracks are … yeah there’s nothing like supercross unless you build it yourself. But then it’s hard to build it yourself because you don’t know how it’s supposed to be like. So it’s difficult. But I think it’s getting bigger [in Sweden]. I know a lot more Swedish people are starting to go to Germany and doing the German series and stuff like that, which is more like supercross. It’s kind of more arenacross I guess, but more supercross than they would have in Sweden at least. So it’s getting better, I know that for sure. Hopefully there will be some more Swedish guys doing some supercross here in the future and also outdoors hopefully. But we’ll see I guess.

So how do you feel like you’re progressing this year?
I feel good. I feel like I’m learning a lot every time I go race and also just being on the practice tracks. I’m learning a lot all the time. I feel a lot more prepared and a lot more confident coming into this year’s season than I’ve done in the past. I think just because I’ve got more experience and I’m learning more. So I feel pretty good. I’m excited for the weekend.

"It was mainly like a nice practice day, if you want to call it that, where you can make a little money."

And you were riding a 250 against the 450s. Besides the start where there any spots on the track where you were wishing you on a 450?
[Laughs] Yeah, like you said the starts were hard on a 250 compared to a 450, but the TiLube guys, Buddy Brooks, built a really good motor so I was pretty competitive in the starts still. Anaheim 1 I had a really good start with those guys so that was good. But yeah, I could feel like … kind of everywhere, like coming out of corners and in between sections and out in the straightaways it felt like the 450 guys just pulled a lot more than me. It was fun though. I had a really good time and it was a really good learning experience for me just being out there racing and kind of getting rid of the first race jitters now for the East Coast. If that’s something I could do in the future, I would probably do it again.

I’m assuming that was kind of the goal for those rounds. Less focus on the results and more focus on getting experience.
Yeah, just getting out there to race and getting a gate drop. There’s no better practice than a race day and there’s no pressure on the first rounds I did. It was mainly like a nice practice day, if you want to call it that, where you can make a little money.

What’s your setup like with the TiLube team? Are you guys going to have a full semi or more of a van and tent setup?
The program’s really good at the TiLube team. We’re not in a semi, but we’re a big … I don’t know what you call them. It’s like a fun mover thing but bigger. One of them bigger ones. Then Jesse Wentland will be my teammate, so we’re a two-rider team. Buddy Brooks built some great bikes, Showa’s helping me out as well and the team got a lot of good sponsors on the side. It’s a really good setup. I’m really excited to see it all this weekend as well because on the West Coast I did it more on my own. So it’s going to be pretty cool. I haven’t actually seen the whole setup myself, but I’m pretty excited to see it.

Has Jesse done some training with you at South of the Border? Are you guys going to do any training together?
I think he’s in Florida. I’d like to hopefully to try to maybe go down to where he’s at to kind of get some riding in together, but we’ll see things pan out here in the next couple of weeks. I’m excited to have him as a teammate; it’ll be pretty fun.

So you have to drive to South of the Border all the way from California after you got your tonsils out. What was that like?
Yeah, it was just me and Amy [his wife]. It was a long trip. In California we live in an RV, so a friend of ours had a towing company tow it out for us, but then we would drive our van. So we left on Tuesday and we got here on Sunday. But we stopped in Kentucky because that’s where the team is located. And then it was the arenacross on Saturday. So we got there on Friday and then the arenacross on Saturday, so we watched that and then drove on Sunday morning. We drove quite a bit the first few days, but then took it a little bit slower at the end, which was kind of nice because it had been a lot of driving.

What’s it like living out of a motor home full-time?
It’s actually pretty nice because we have a pretty big toy hauler … actually one of the bigger ones to get, and it’s just Amy and me and our two dogs. It’s actually like a small apartment so it’s not bad at all and it’s pretty nice inside as well. So it works out good and it’s a lot cheaper than renting in California. There’s some consistency to it, like we can always have our stuff instead of having to move around. It’s nice.

How long have you guys been doing that for?
We moved in February 1 last year so just a little bit over a year.

In the past you’ve helped Honda HRC with testing and filled in for them. Are you still helping them with testing? Did you get to help develop the 2017 450?
I’m not doing there testing anymore, but I did get to ride the ’17 in the past. I’m not sure how much detail I can go in about it though. But I rode it some before last year … let’s put it that way. [Laughs] But they did make a lot of improvements to the 450 and the bike is really good and fast.

And it’s looking like Roczen won’t make his return in time for outdoors. Have you and Honda had any talks about filling in during the summer?
I haven’t. I’m not really sure as far as what’s going to happen with that, but we’ll see. We’re just gonna have to kind of wait and see. Right now I’m mainly just focused on doing my supercross thing and then we’ll see how everything goes for outdoors.

What do you like to do in your free time when you’re not riding?
Shoot, there’s not much free time being a racer. Whenever I do get some extra time I like to hang out with Amy and friends, I like to go to church and take part in that type of stuff. I like mountain biking and stuff. I know that’s part of the work and the workout but I think it’s pretty fun. And whatever else we can find … go karts. [Laughs]