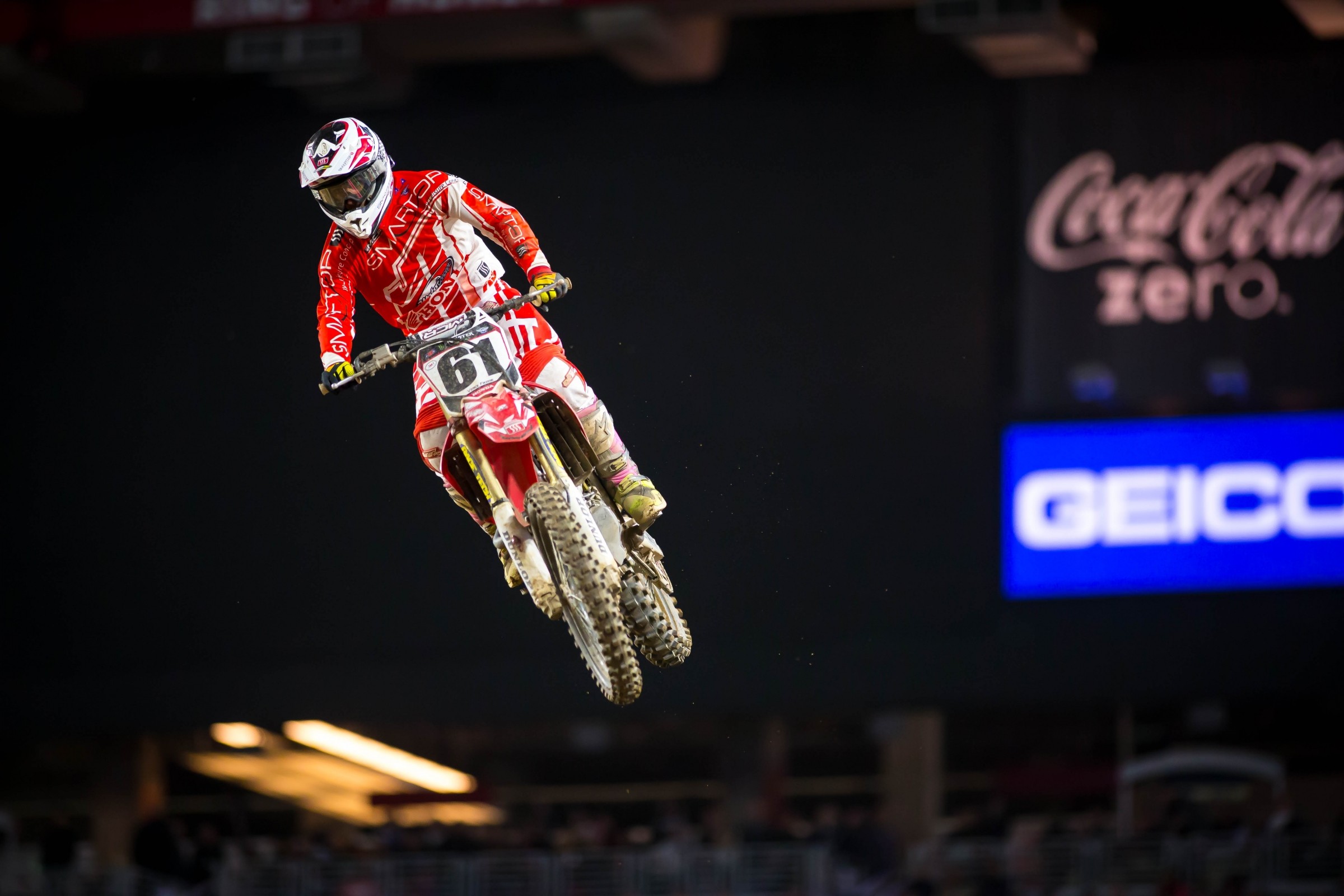 The reputation proceeds Smartop/MotoConcepts Honda’s Vince Friese. As soon as he’s in a battle, the fans—and other riders—collectively brace themselves for a potential incident. Now, Vince isn’t always guilty of dirtying other riders, but he’s certainly done enough things enough times to where the die is cast, and even judgement calls never go his way.

Case in point was Anaheim 2, when he and Jason Anderson collided in a corner and Anderson blew up on him. The Rockstar Energy Husqvarna rider took a swing at Friese’s helmet in the tunnel after the race, which resulted in an instant DQ for the night.

Was Anderson’s anger justified? What does Friese think? We let him explain his side when we caught up to him on press day in Arlington.

Racer X: Okay, let’s start here, Vince. We’ve heard a thousand opinions on what happened between you and Jason Anderson at Anaheim 2. What’s your take?
Vince Friese: I was just riding hard, man. I got pushed wide in the corner before, so I went into the next corner on the inside and tried to pivot down low, so I could get onto the next on-off and kind of fall in line behind those guys. And man, he [Anderson] just cut down so quick that I was just like a sitting duck there on the inside. I was expecting him to rail the outside. Not really his fault and not really my fault, just a racing thing. That shows you how gnarly those guys are, he had passed me and he was already thinking like “I’ve got to go pass Malcolm [Stewart] right now!” That’s awesome, but sometimes that will happen. Three or four guys go into a turn and you have the mindset of “I’ve got to go now and pass all these guys” you might have a collision with one of those guys. I don’t know what he expected me to do. Was I supposed to wait through the sand, slow down and go behind him? I just went low in the turn, I expected him to go around the outside, I’d get on the step-on step-off and fall in behind, you know? It is what it is. It happens, but when it happens to me it seems like it blows up a lot more. I get that. I deserve some of that. Maybe not all of it.

So you do think your reputation, like what happened with Peick last year, that affects what riders think of you when these things happen?
Yeah it does, and not just Peick last year, but other stuff. It’s hard because I get good starts, and those guys have to pass me and it has to get frustrating. I know what it’s like, I’ve been in that situation as an amateur or at other races, there are guys that start well consistently, but they’re not as fast as you, but they ride hard and don’t let you go right by. So you get mad at that guy even if that guy isn’t doing anything wrong. He’s just trying to race. But you get frustrated because you’re thinking, “I shouldn’t be stuck behind this guy.” So I understand why he gets mad or other guys get mad, but I’m not going to stop getting good starts and I’m not going to stop riding hard. That’s what I get paid to do. Also, I’m getting there. I’m getting closer to those guys every year and every week. So I’m going to keep riding hard. Not dirty, I try to be as clean as I can and do my thing, but I’m not going to stop getting good starts and riding hard.

Okay, the Anderson crash there, that might have been a just racing deal. But these other incidents—what is your reaction to those? Do you just think “Man I was just trying to be aggressive but I went too far?” Or did you just make a bad decision? What is your reaction to a lot of these other incidents where the riders get really mad at you?
Man, I don’t know. I don’t think there’s been one like that in the last couple of years. But in the years before that, I was just young. I was probably being dumb and would lose my head a bit. You know, you’re 19-20 years old, you’re a professional motorcycle racer, you get a start … again, I’ve always been good at starts. I get a start, get a holeshot, and I think “Maybe this is the race where I get a podium!” So then I’m in the “This guy is not passing me” mindset. I made some dumb moves, definitely, I’m not going to try to deny that. I’ve learned from it, now I’ve learned to not try to make it all happen in one turn or one lap.

So you feel you’ve taken some lessons from all this?
Definitely. I learn every week. That’s all I can do is keep learning and keep improving. I feel like I keep getting better. I’m definitely not where I want to be yet, but I’m learning. Definitely thankful to Mike Genova and everyone on the Smartop/MotoConcepts team. I wouldn’t be still racing if it wasn’t for him. He’s given me the ability to learn and grow and stick with me through that. Everyone, Mike and also Tony [Alessi]. For them to stick with me through this is huge. Hopefully someday I can make all the time and effort he’s invested in me worth it one day.

So when you’re in the tunnel and you’re getting yelled at or pointed at, and then eventually hit, what’s running through your mind at that time? Are you shocked? Do you get angry back at them?
I don’t know man…. At the end of the day, we’re racing dirt bikes, and I’ve been doing it since before I can remember. That stuff happens now and again. It’s happened so much that at this point it just is what it is. The only difference is now there’s 70,000 people watching and there are TV cameras. It’s no different than stuff that’s happened to me before, now it’s just a little more magnified, I guess.

So you don’t get mad yourself when someone is mad at you? You keep your cool or do you eventually get heated too?
Well yeah, last year with Weston, I would have loved to have thrown some punches back, or even with Jason, yeah, I get mad, I get frustrated, because like, dude, I didn’t do anything wrong. Maybe come talk to me about or watch some video on it first. Don’t just go hitting me in the head. We are professionals, we are racing, and it does happen, but we are out there in front of a big crowd and we have live TV cameras on us, and we need to keep that in mind. It is what it is. I’m on probation, too, so I can’t do that stuff.

I heard you tell [Steve] Matthes last week you actually didn’t want Jason to get DQed that night.
No, I definitely didn’t. I’m still a huge Jason Anderson fan. I love watching that guy ride, the way he hangs it out and the way he rides, it’s pretty awesome. Yeah, it sucks that had to happen, and it’s not like he hurt me or even tried to hurt me. He was just frustrated and needed to let it out, and I get it. I get why he was mad. But you’ve got to probably not handle it like that.