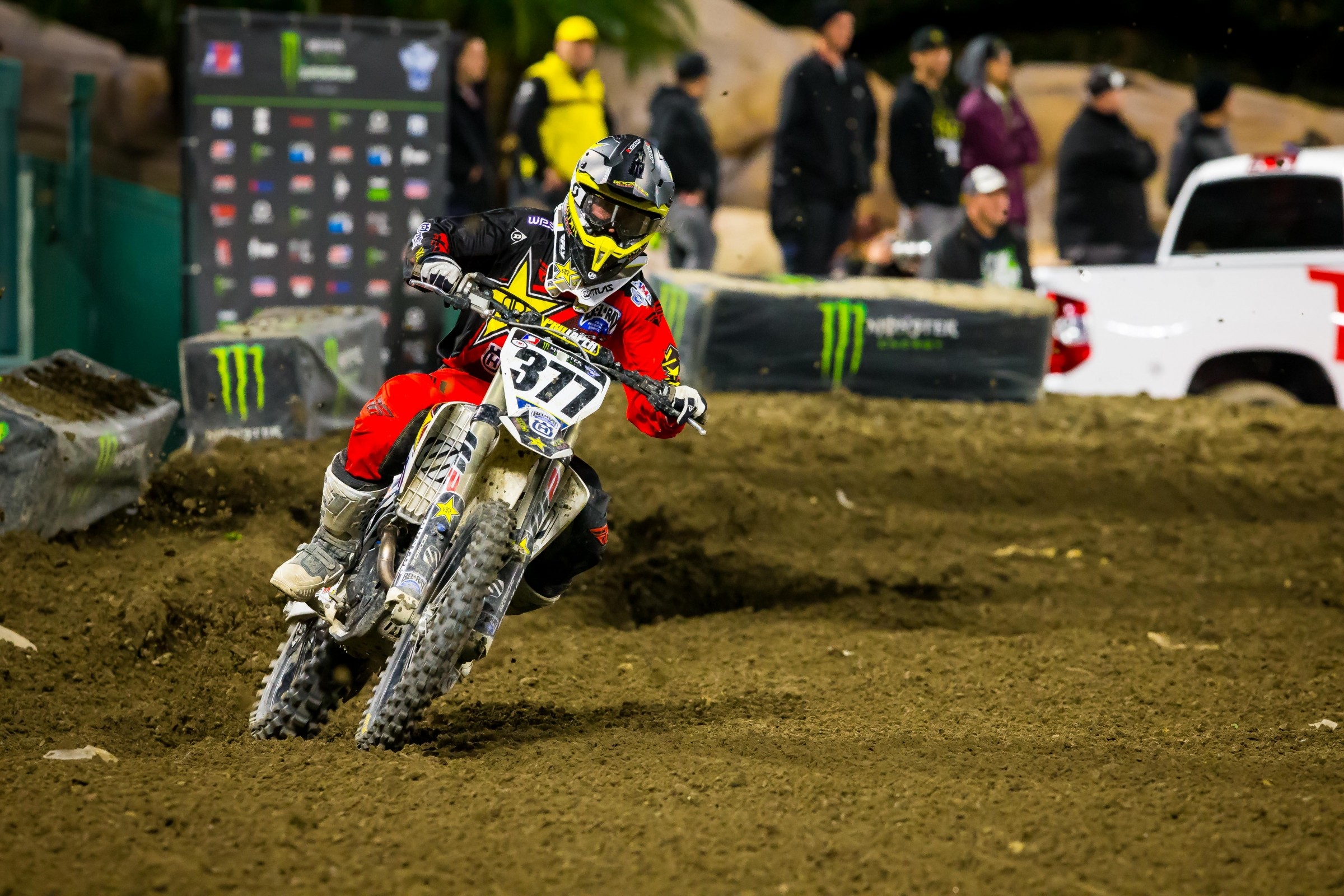 Exhaust: In Praise of Characters

It’s been a busy couple of weeks over in the Rockstar Energy Racing Husqvarna camp, hasn’t it? In comes Dean Wilson, Christophe Pourcel goes “on assignment” to the Canadian MX series, Jason Anderson adds a few more run ins to his running list of running into and being run into by others. Martin Davalos? Anything weird happen with him in the last few weeks?

All of these incidents probably incited some sort of reaction in you. I talked last week about how Anderson dances into the fire, which really gets people fired up. There’s no shortage of opinions during wild weeks like the ones Rockstar Husky has had, and you know what? That’s awesome. You don’t have to love it or hate it, it’s just good when fans think something. This sport isn’t great at creating a variety of winners and champions.  That doesn’t mean a variety of guys can’t carve out a niche, though.

And when it comes to niches, Pourcel has a niche within a niche within a niche. He lived in a microscopic space consisting of exactly one rider: him. Motocross still offers some personal expression and each rider has his own distinct riding style, but Pourcel is the most unique of all. At a given race, you get 80-plus riders doing it one way, and Pourcel doing it completely different. Again, you can like that, love that, or hate that, but I always appreciated him being different. We don’t need more sameness.

Pourcel was at his peak during his 250 days with Monster Energy/Pro Circuit Kawasaki, with back-to-back 250SX East Region SX titles in 2009 and 2010, and two coulda’ shoulda’ woulda’ 250 National MX titles (in 2009 he led Ryan Dungey in points until the next-to-last round at Southwick, when his engine blew. In 2010, he led Trey Canard going into the final round when he crashed and broke his shoulder.) By the way, there’s a French curse on 250MX titles. Stephane Roncada and Marvin Musquin also went down to the wire for this title, but lost it at the final round. Pro Circuit is the most successful team in 125/250F class history, and Pourcel sits third all-time in victories for this powerhouse squad, behind only Ricky Carmichael and Ryan Villopoto. But it’s not the wins for Pourcel, it was the way he won those races. Dude did it his own way.

Pourcel has one of those “doesn’t look like he’s trying hard even though he’s going fast” riding styles.  That’s a blessing and a curse for anyone who has it—Pourcel has been accused of “not trying hard enough” the same way Robbie Reynard, Kevin Windham, or Damon Huffman were at times. But Pourcel’s style that unlocked every other part of his character—you could never quite tell if CP was going for it, cruising, or some combination in between. Plus, sometimes he really would hold back, and I’m not even sure why? Maybe for fun?

My personal Pourcel highlight came at the 2010 Thunder Valley National, during a battle with a young teammate (Dean Wilson, ironically). Pourcel was already dominating the series but this time he and Wilson battled side-by-side, putting on a great show. Then, all of a sudden about halfway through the moto, CP looked over at Dean in the air, gave him a thumbs up, and promptly took off! I’m not exactly sure what he was doing, but it almost looked like he just wanted to have fun battling for a bit, and went back and forth with Dean before finally saying “Hey kid, good job! You’re riding good, that was fun, but I gotta go!”

A few weeks earlier, Eli Tomac stunned the sport by winning his first pro race, at Hangtown. The next weekend in Texas, I asked Pourcel what he thought of the new challenger, and he smiled. “Yes it’s good! I want to play!” He was excited to have someone new to ride with and study. Lo and behold in practice and the first moto, Pourcel went out and found Tomac and battled him for a bit. It was almost as if he was excited to have a new style and a new rider to race with in person.

Then there was the qualifying. Oh, the qualifying. Outside of James Stewart, Christophe Pourcel was the best one-lap qualifier I’ve ever seen. He just has a totally different way of finding lines, waiting for the track to dry, and pinning it once for all the glory. Yup, that also means there are a lot of laps where CP cruises around looking for lines while everyone else is charging. Actually, there were afternoons in supercross where he would just sit in the mechanic’s area doing who knows what, and then with a few minutes to go he would roll out, do one lap, get to the top of the qualifying board and pull back in. It looked as if he was having a conversation and then said, “Oh wait, hold that thought, I gotta go and put in the fastest lap of anyone here real quick. I’ll be right back.”

James Stewart is the only other rider I know who could do something like that. And hey, even when Pourcel finally made it to the 450 class last year, well, he proved he was capable of those shenanigans even against the best riders. At the Nationals, we eventually had to adjust our camera coverage during the live practice shows. No matter what else was going on, with exactly 3:30 to go in the last practice, all cameras went to Pourcel, inevitably about to unleash a lap like no other.

Stewart was blazing fast in practice, but he was also blazing in the races. With Pourcel, you never knew what you were going to get, and that’s part of the knock on him. When you know a guy has that much speed, you want to see him add to the #deepfield and battle for the win. But so much of his day depended on things that didn’t matter to other riders, like finding bizarre lines on the edges no one else would dare take. In the 250 days, I think he would frustrate rivals by doing stuff they never saw coming. I saw him outfox Austin Stroupe several times in 2010, and I know Justin Barcia wanted to do some bar-banging with him, but Pourcel was a freaking magician, now you see him and now you don’t. Blake Wharton recently told me that when Pourcel was in the class, it seemed to change the way everyone went about racing. These kids knew one way: wide-open. Pourcel could beat them using totally unorthodox moves, plus, he still didn’t even look like he was trying hard while he was beating them.

One rider took that all in. In 2010, Blake Baggett broke his arm early in the season and missed most of the nationals. So he watched the races on TV, studying Pourcel. The next year, Baggett applied those lessons to unleash hell on the field, starting the run of mind-blowing “El Chupacabra” charges through the pack. How did he make those passes? He used lines no one else would, the ones he saw Pourcel use the year before.

Yeah, Pourcel did most of his winning in the 250s, but it’s key to remember he didn’t just whip up on rookies. Pourcel won the second supercross he ever raced, beating Ryan Villopoto. A rivalry was set to brew until Pourcel broke his leg in practice the next week. Then came a horrible crash in the GPs that year (while battling another legend, Tony Cairoli) and an entire year away from the races. When he came back to the U.S. in 2009, he was matched against Dungey, and he gave him all he could handle and possibly more. So, who were Pourcel’s peers and contemporaries? Villopoto, Dungey, and Cairoli, and he can say he beat all three. Think about that.

That, ultimately, is what made Pourcel not only so intriguing, but also so frustrating. You knew he had it in him to do amazing things, but you never quite understood what was going on. He followed those two great 250 years by … not getting signed to a 450 deal for supercross. You think it’s weird that Malcolm Stewart found himself rideless this year? Pourcel might have been the best 250 rider in both series for two years, but couldn’t get a ride. Did he ask for too much money? Did he rub people the wrong way? Did he just get screwed? There are many, many stories out there but no one knows for sure.

No one ever knew. Pourcel was shrouded in mystery. At one point, he started claiming that he didn’t ride or train much, and just busted out a jet ski during the week and cruised around a bit on a KX450F. No one could tell if he was serious or just playing games when he said that. Eventually, late in 2010, a fan showed up to the Steel City National and handed Pourcel a mask resembling The Joke from Batman. Pourcel showed me the mask, proudly. He was The Joker because you never really knew for certain what he was capable of, what he was thinking or what he could do.

The Joker. What a character.