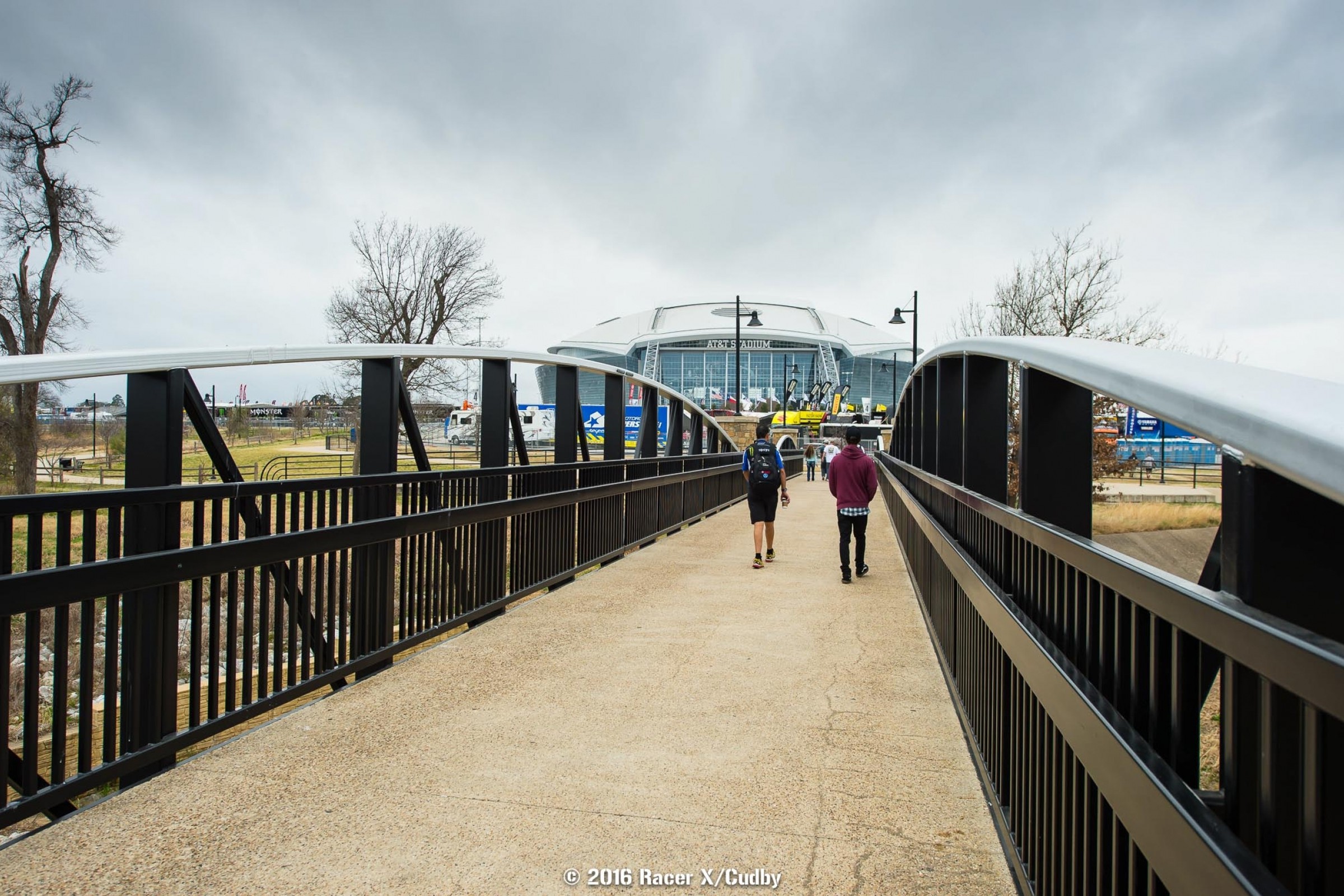 Shane McElrath and Justin Hill have proven to be worthy, and friendly, title rivals this season. After a nail biter in Oakland, Hill leads McElrath by a single point and holds three wins to McElrath’s two. McElrath said he was just happy to have survived the rutty Oakland track, and that he was looking forward to coming back strong in Dallas and “making a statement for the break.” If he does, he’ll set the tone heading into the 250SX West break. If he doesn’t, he’ll have until April to think about it.

Despite not being the fastest man to the checkers the last two rounds, Ryan Dungey has still managed to increase his points lead, first from seven to 15, then from 15 to 17. But with Eli Tomac now in second and riding like he’s got things figured out, Dungey is going to have to beat Tomac to the line in Arlington in order to keep growing that gap. Tomac’s got the momentum right now, but Dungey always seems to find a way to handle business when it matters most. It’s going to be interesting to see how he chooses to manage his lead in Arlington.

When it became obvious the track in Oakland was going to be nasty and extremely rutted, it seemed like the perfect opportunity for Aaron Plessinger to take his first win of the season—the Yamalube/Star Racing Yamaha rider is very good in those conditions. Unfortunately for Plessinger, he got hung up in a big first-turn pileup in the main and never got a chance to battle up front. He’s too good not to win sooner or later, we’ll see if it happens before the 250SX West Region goes on break.

Now that you mention it

Speaking of riders who seem like they’re close to winning, we’d be out of line if we didn’t mention Martin Davalos. He’s led plenty of laps this year and if Monster Energy Supercross 250SX mains were still 15 laps instead of 15 minutes plus one lap, he’d have won in San Diego. His starts have been decent and he’s been on the podium twice. If things go right this weekend he might be showing everyone his win face.

Given Jimmy Decotis’ recent performances it’s strange to think he’s never been on the podium. The GEICO Honda rider showed he can lead laps in San Diego, and in Oakland, on the nastiest track of the season so far, he showed he can go hard for an entire main event. At the end he was mere inches away from taking third away from McElrath and very well might have, if not for a lapper. Right now Decotis is so close to the podium he can taste it. We’ll see if he actually gets a bite in in Arlington.

Who was that guy?

At this point the Cooper Webb from the first two rounds, you know, the guy who went 10th and 14th, is a distant memory. The Yamaha rider has been fantastic lately, even setting the fastest qualifying time in Oakland and going on to take third, the first 450SX podium of his career. He’s obviously getting things figured out, and if he continues to make progress and get good starts he’ll be a podium regular. What are the chances he brings it home for a win in Arlington?

After the first three rounds Marvin Musquin trailed Dungey, the series points leader, by just seven points. He was putting in solid rides, hadn’t missed the podium, and had to feel good about the way his championship was shaping up. Then Glendale and Oakland happened. Musquin took ninth in Glendale, and thanks to a crash in Oakland, took yet another ninth, dropping him to third in points and facing a formidable 25-point deficit to Dungey. There are plenty of races left, but Musquin needs to start making some of those points back, and soon.

It ain’t over yet, despite being over

With 73 points separating himself and 250SX West Region points leader Hill, Jeremy Martin’s shot at a title this year is gone. Okay, so mathematically he’s still in it but c’mon, not even the New England Patriots could overcome a gap that big this late in the game. That said, Martin still has five more opportunities to show that everyone was right to have included him in pre-season title chatter. We’ll see what kind of firepower he brings to Dallas after missing the last two rounds.

Even though Arlington is the sixth round of Monster Energy Supercross, it’s only the second round for Dean Wilson with Rockstar Energy Husqvarna Factory Racing. And if Wilson’s performance in Oakland, where he finished 10th (a season best) after just two days on the bike, is any indication of how well things are working out, we could see some heat from Wilson this weekend. After the race in Oakland he told us he expected to be better at the next round—we’ll see if he makes it happen.

If you claim to have predicted Blake Baggett would be the fastest qualifier in Glendale you’re lying. That’s no disrespect to Baggett either, he’s just not known for crazy displays of speed during qualifying. He followed it up with a nice seventh that night, and another seventh in Oakland, his two best results so far. We’re not ready to start locking him in for a podium quite yet, but he sure looks to be surging in the right direction.