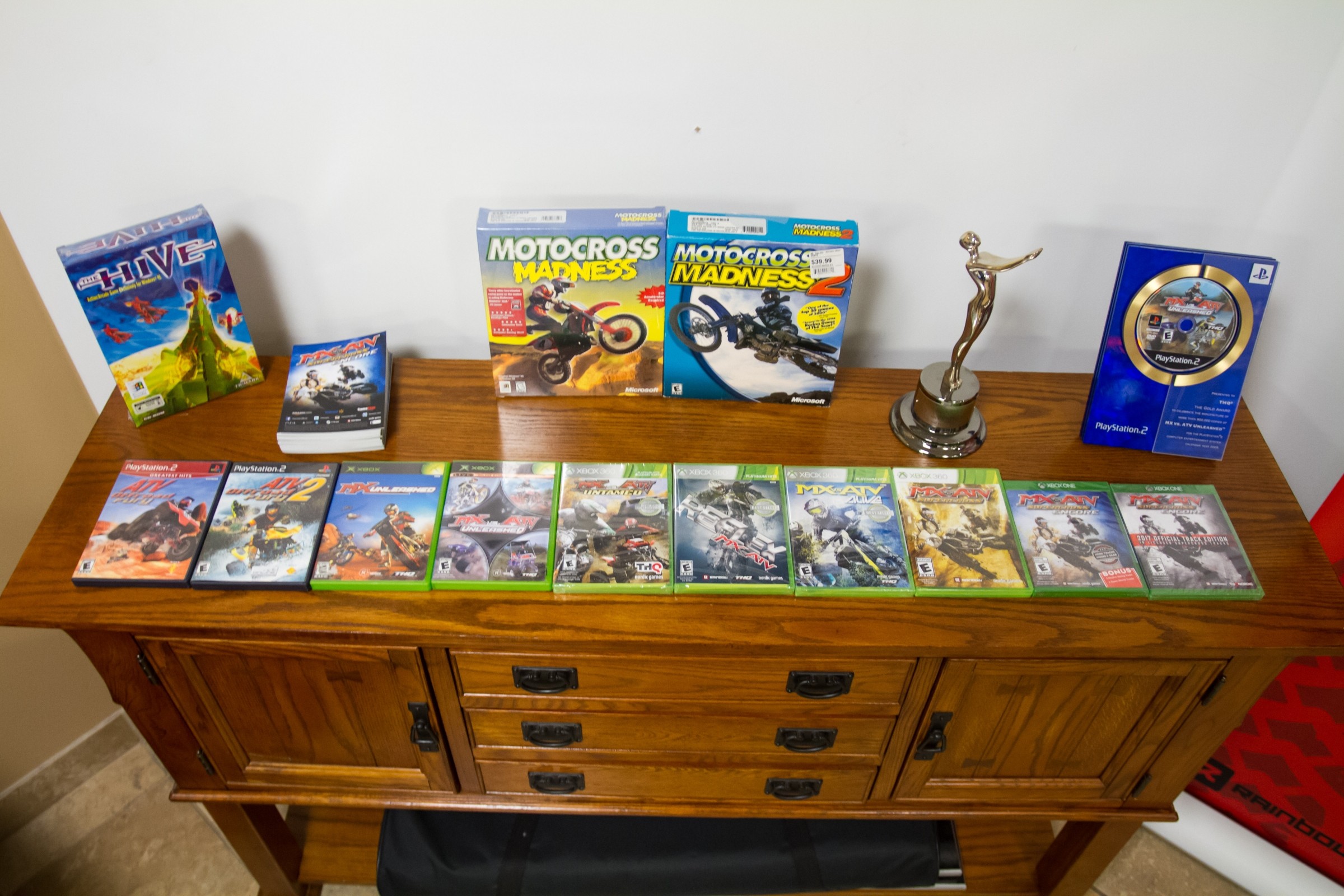 Last week I toured Rainbow Studios in Phoenix, Arizona, while in town for supercross. While there, I did a Facebook Live tour of the office, which you can check out here. Facebook Live is still in its infancy, so it’s a bit buggy and we have yet to do a live video without a hiccup. Things like dropped audio, sideways video, or completely dropped video are the typical problems. In this instance, the stream ended early. I was pretty bummed, as there was some good info lost straight from David Knudsen, the producer and licensing manager for Rainbow Studios. David led the tour and near the end he addressed what we’ll call, "The Reflex Issue." MX vs ATV Reflex was released in 2009 and many users of the game have been vocal that this was their favorite version. There have been several iterations of the game released over the years, but the Internet warriors won’t give up on expressing their want to “bring Reflex back.”

The way the characters and bikes move and react within the game are known as physics. Many of the users of the games were happy with the way the game performed; the way the game felt when you played it; and the way the rider moved on the bike had a nice flow to it. As someone who grew up playing these games, I somewhat agreed, without much of an opinion. It seems that every time a new version of the game comes out, you’ll always hear people bring up this old issue. Message boards fill with hate on the way the game performs and how they wished Rainbow Studios would bring back the old physics and just give them new tracks, bikes, and gear.

Some people actually believe that Rainbow Studios is purposely trying to make the game worse, which is ridiculous. There’s two parts to why the Reflex physics are gone and are never coming back, but before I get into that I’d like to give a little history on Rainbow Studios and their history with off-road games.

Rainbow Studios started with a motocross game, switched to ATVs, went back to motocross, and then combined the two creating the MX vs ATV franchise we know today. Why the switch and then combine?

Rainbow Studios came out with Motocross Madness in 1998 and was licensed through Microsoft. The duo repeated with Motocross Madness 2 in 2000 and around that time Sony approached Rainbow Studios and expressed their interest in developing an off-road racing game of their own. With a non-compete clause already in place with Microsoft, Rainbow switched from motocross to ATVs to allow them to still produce the game for Sony. With Sony, Rainbow created ATV Off-Road Fury 1 and 2 in 2001 and 2002 respectively.

Going back to the Reflex issue. In the early 2000s it was common for tech companies to outsource some of the work for the programming. The third party companies typically work on code that gets implemented into the main code to perform certain tasks. Rainbow Studios had hired another company to write the network code that basically controlled an essential part of the way the game worked. This is all good, when the two companies are working together. Sometime after MX vs ATV Reflex was released, the third-party company was bought by another company and they completely internalized everything and dropped anyone that wasn’t in-house without even an option for licensing. Many other games, not just MX vs ATV, suffered from this and many popular games went offline. The gaming community was in outrage.

In 2011 MX vs ATV Alive was released in the spring and Rainbow Studios dropped the third-party coding option and internalized the programming themselves. They had to start from scratch and were able to get the network code to work with Microsoft and Sony starting with MX vs ATV Alive. Shortly after, in the fall of the same year, THQ, Rainbow Studios’ parent company, filed for bankruptcy and everyone was laid off. The office was liquidated and many servers and other items were thrown away or destroyed.

When David was telling me all of this I couldn’t help but imagine that scene from the movie Office Space where the guys go out and beat the printer. Whether it looked like this or not, I don’t know, but we do know that some of those employees filled a truck in the middle of the night with stuff and stored it.

In 2013 Rainbow Studios was rebooted and they essentially got the band back together bringing back many of the original designers from the Motocross Madness days and a bunch of new talent as well. One day those same guys that stored the signage, trophies, and other memorabilia when the company closed actually showed up unannounced and returned the items. Even though some things did make their way back to the office eventually, much of the code that contained the instructions on how these games work under the hood was destroyed and lost forever. So keyboard warriors, sit this one out the next time you want to get agro about a video game that is designed for fun.

What is pretty interesting is some of the employees were actually discovered from the online Motocross Madness community. Stephane Roncada, the 2000 125 East Region Supercross Champion, and Mike Mamula are two examples of people who turned a hobby into a career. That’s right, Stephane works at Rainbow Studios helping make video games! When I asked him how this all came about he told me, “I found out about the game from fans I had talked to a few times. A few months after I started playing Motocross Madness, I found out from the same people that it was possible to create your own tracks and play them in the game, and that’s how everything started. I would spend hours on the phone with them, learning how to use software like Adobe Photoshop and 3D Studio Max to create tracks and put them in the game. Then, in 1999, I met up with them in L.A to attend the E3 video game conference, where I met the team behind Motocross Madness. When they found out I was a professional rider and making tracks for their game, they asked me if I would be interested in working with them, creating new tracks for Motocross Madness 2, and I jumped on the occasion, and my contract work with Rainbow Studios started shortly after that.”

That’s right, while Stephane was racing as factory rider for teams like Pro Circuit and Yamaha of Troy, in his spare time he would play Motocross Madness on the PC and modify and build tracks. We’ll have a full interview with Stephane posted in the coming weeks so keep an eye out for that.

Mike also grew up racing and after a unfortunate motocross crash left him with a spinal cord injury and in a wheelchair, he began playing Motocross Madness more and more. Eventually Mike became pretty well known throughout the gaming community and with persistence he followed up with a job opportunity with Rainbow Studios on an Internet forum targeted to guys like himself that would modify the game and build their own tracks. When I asked Mike what it was like to work at Rainbow Studios he said, “It’s a dream come true. I never thought my little hobby would turn into a job. It’s a way to give back from where I came from. I always try to make the community happy.”

Being shown around Rainbow Studios was pretty cool in itself, but this was an especially cool experience for me because I grew playing most of these games as a kid. As many of us who ride dirt bikes have discovered, they’re kind of dangerous and similar to Mike after getting hurt as a kid, video games became an escape and a way to try to replicate the feeling you get when you ride. My history with this franchise runs pretty deep. I started playing ATV Off-Road Fury in the sixth grade back in 2001. Right around the MX Unleashed days my dad and I got pretty into playing the game and got really competitive with it. It got to the point where we had our own PlayStation 2s in separate rooms because playing offline got too boring. And since online gameplay was only single player back then, we had to have our own systems because we don’t know how to share. This is all pre-Wi-Fi so I ran about a 100 foot Ethernet cable across the house to my bedroom so my dad and I could virtually bang bars while yelling at each other. I’m sure my mom loved it. I’m sure she also loved going to the store about once a month to get us new controllers from pre-loading too hard and burning so many laps.

When I asked David what the future holds for Rainbow Studios and MX vs ATV he said, “We've been having the best time reconnecting with the fans and each other since THQ Nordic opened Rainbow Studios back up along with many new additions to the team. With the success of our latest game, the future looks very bright for the MX vs ATV series and we don't plan on going anywhere for a very long time!"

In closing, I want to thank David and the rest of the Rainbow Studios crew for the hospitality and the awesome tour. It was cool to see what goes on behind the scenes and I hope we can put the "Reflex issue” to bed. After visiting the office and playing the new game, it looks like it's time to go pick up a PS4 or XBOX one and start playing again.