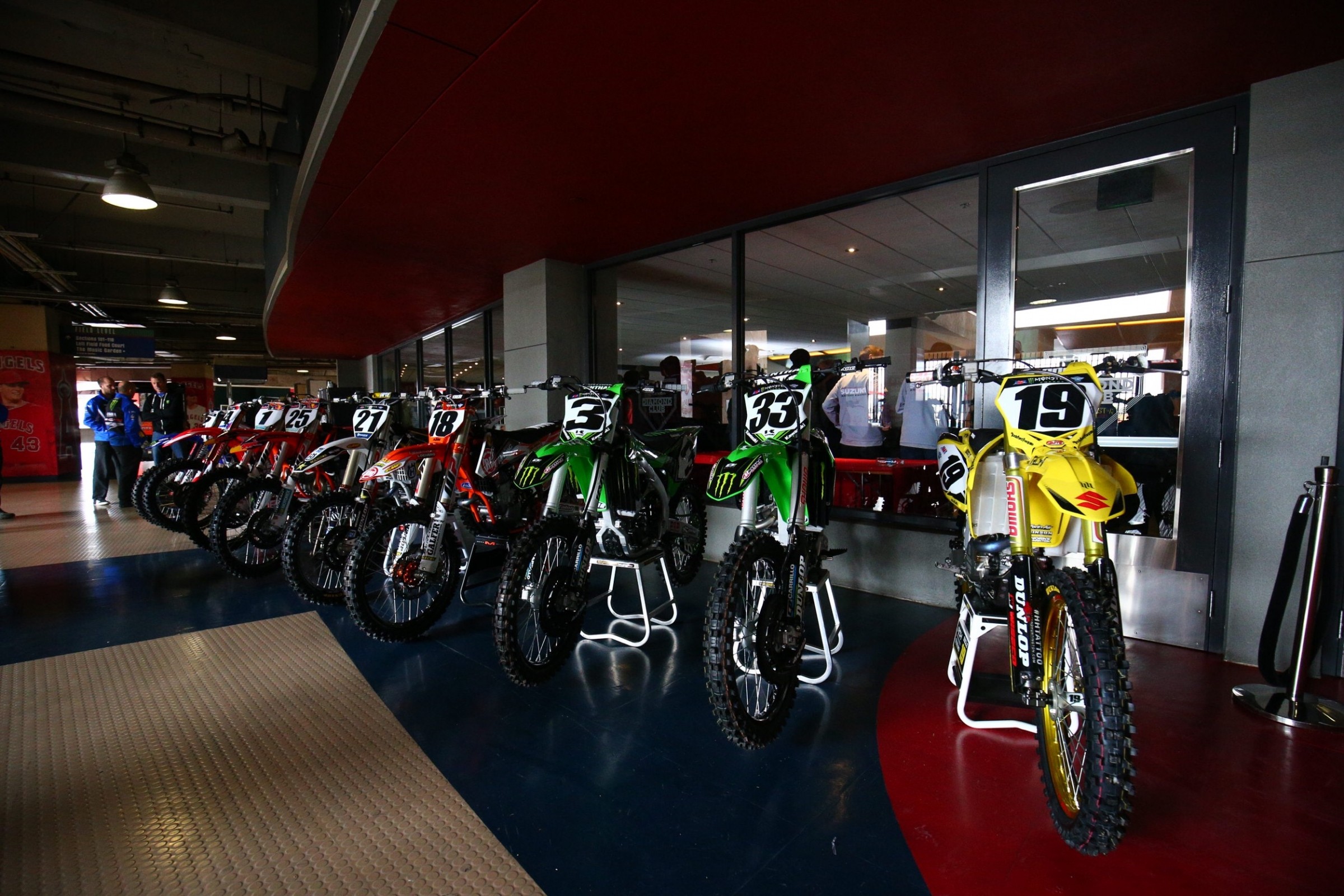 Exhaust: Where’s the money coming from?

The skies were gray and the weather was rainy on Thursday, but that didn’t remove one bit of sheen or shine from the festivities at Angel Stadium, in Anaheim, California. Monster Energy AMA Supercross looked glorious, with a packed house of real media asking real questions, a packed stage full of talented, prepared, capable riders, and a paddock on the other side housed with trucks and teams looking bigger and better than ever. One rider even wore a suit! (Ken Roczen, trying to look next level and dress like NBA and NFL players do during their press conferences.) Supercross really does get bigger and better every year. Maybe not more hyped or more competitive, but always more polished. I don’t have a number on the “bigness.” I just know that anyone who showed at the stadium today would think that this is clearly a big deal.

In fact, I got that exact text from one of the supercross TV producers, who said, “Anyone who would walk in here would have to think this is a big deal.” I was also happy to see ESPN’s lead NASCAR reporter Bob Pockrass on hand, his first Anaheim supercross. He said he was drawn by the Dungey storyline of coming back from a big—and rare, for Dunge—injury, and his attempts at a third-straight title. Last year, remember, Dungey was revealing the Wheaties box. Always something good here.

Then come the conversations and the talks. Everyone is fired up, riding well, in shape, and ready. No riding today due to the rain, but that’s fine—everyone will be good and ready for Saturday. What’s the Super Bowl of this sport? It’s A1.

That’s the good side. On the other side, though, my conversations at the track yesterday covered something far less sunny, shiny, and glossy. Lots of conversations drifted into the relative strength of the motorcycle industry, and the budgets connected to that. It’s not good. Yeah, I remember what it was like here in 2009, and it was worse. But at least then, everyone knew slashed bike sales and budgets were related to an economic collapse well outside of the industry’s control. I don’t want this to quickly devolve into a political discussion, but can we all just agree the economy isn’t as bad as it was in 2008? Many industries have bounced back to pre-recession levels, including autos, which have flirted with record sales for the last few years.

From what I hear, motorcycle sales have bounced back slightly from the absolute doldrums, but annual sales generally come in 40 to 60 percent off of the highest heights in the mid-2000s. Yes, people spent stupid money back then so some of those numbers aren’t realistic targets. Also, I think many enthusiasts have switched to side-by-sides, which didn’t exist in the same numbers back in 2004, but certainly pad the profits of some of the manufacturers. But all that really matters is that motorcycle sales just aren’t good right now, and from what I hear from many, dirt bike sales, specifically, haven’t had a massive rebound and are just way, way down from the halcyon days of the early 2000s.

Why? I’ve covered this topic quite a few times, but I want to continue hammering on it. There are a lot of theories, starting with four-strokes, of course, and the rising costs and speeds inherent to them. You don’t need me to tell you about the four-stroke deal. There’s a letter about it in Ask Ping! almost every week. There will be rants about them in the comments below this article. Four-strokes. You know all about it.

Also mentioned is the rise of training facilities, which have taken the fastest talent away from the local races and put more emphasis on “making it” professionally. That’s an unrealistic goal for most local riders. At the elite level, things are good—more amateurs get good training and support than ever, and move into factory rides early. Those riders come into supercross more prepared than ever. But that only impacts the one percent (where have you heard that term before?). The hundreds of thousands that just want to have dirt bikes and go ride and have fun? Doesn’t really help them. Plus, if you want to make it or at least pursue racing seriously, you now see moving to a training facility (which is a wild sacrifice for a family) as the best route, as opposed to ripping it up every weekend at your local tracks. Yes, very few local heroes “make it” but the best local riders always came to the races because they thought they were going to win and get discovered. That illusion of potential success kept people coming to the races. A dozen years ago, I remember going to Steel City on weekends and seeing factory Suzuki rider Broc Hepler, at that time one of the fastest amateurs in the country, racing the B class every weekend. That was normal and anyone else in Pennsylvania, Ohio, or the surrounding area came to Steel City to challenge Hepler, because beating him meant something.

Now, the hype around the local riders is gone, and fewer riders, supposedly, can afford to race now that things have grown more expensive. With that comes the erosion of local racing, and then local tracks close, and then people have fewer places to race, which makes it harder to go racing, which makes it less fun.

It’s not fair to only blame four strokes and training facilities. No doubt there are larger factors at work. Many just think smart phones and the internet have made life so fun that kids don’t want to go outside and ride. Some problems can’t be fixed from our level—there are millionaire TV execs trying to figure out how to get their ratings back, and they can’t figure it out, either.

But we’ve got to figure out something. Supercross has never looked better, but way, way down below all that, the local level, where kids and parents buy bikes, gear, and parts and go riding and racing together, is hurting. There has to be a way to fix things at the bottom, or things at the top won’t be looking so good eventually, either.