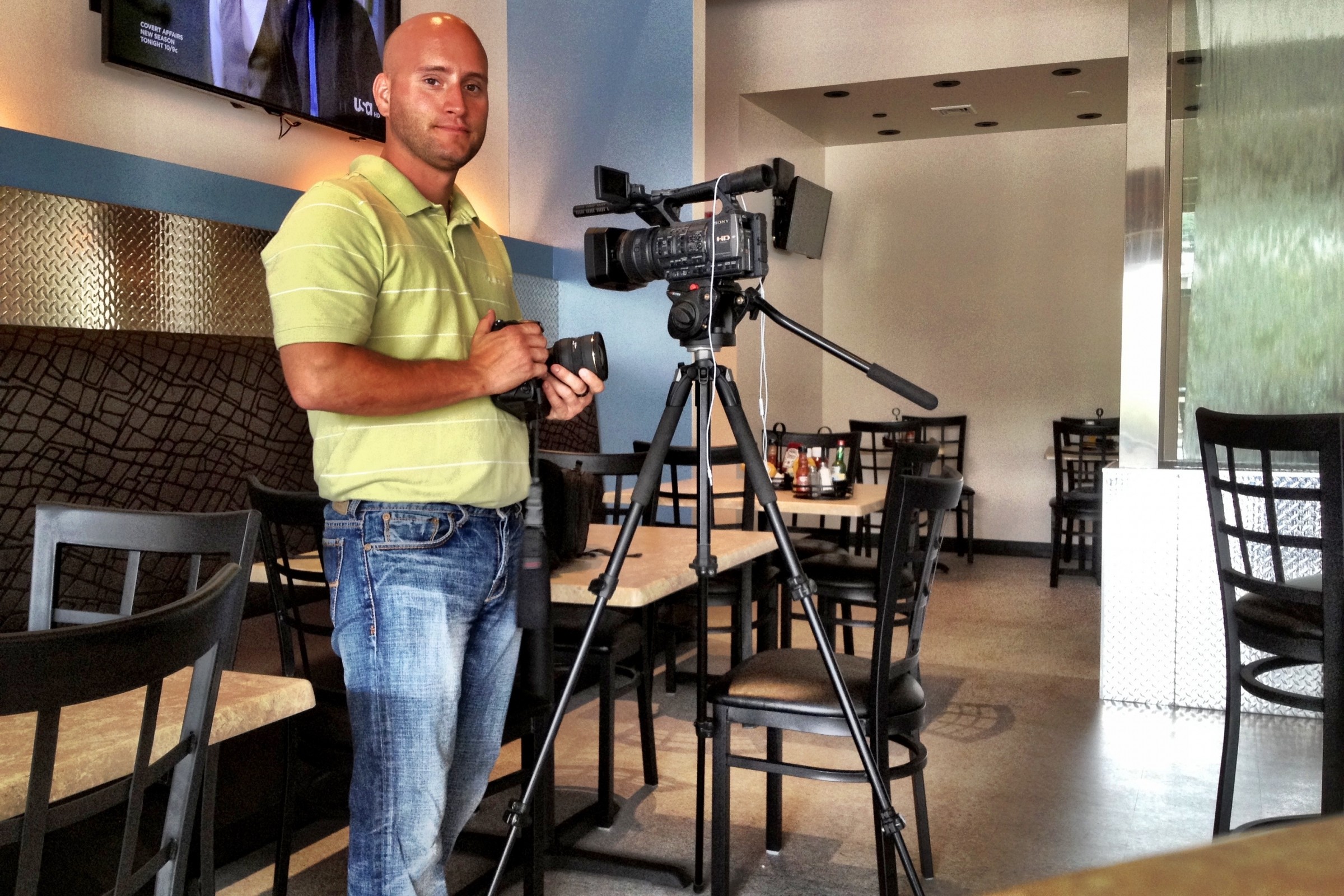 Where Are Gene Stull

Gene Stull was a fast kid that came out of Pennsylvania’s hardscrabble District 5 racing series with an outsized personality and sense of humor. He grew up banging bars with Branden Jesseman and Broc Hepler, and won more than 16 various amateur championships back in the late 1990s.

On a mini bike, Stull was blazing fast, and had support from factory Suzuki. He won two titles at Loretta’s, beating out guys like James Stewart and Josh Hansen in the process. But Stull’s career as a dirt bike racer stalled just as soon as he turned pro, and it quickly fizzled out.

A combination of injuries and burnout had taken a toll on his body and mind, and Stull’s professional career was over nearly as quickly as it started. But Gene is a fighter, and through his outgoing and creative personality, was able to regroup and build a good life outside of racing dirt bikes.

Racer X: Gene, thanks for taking the time to talk to us. What are you doing with yourself now?
Gene Stull: I was wondering when you are going to call me for one of these! It’s about time. [Laughs]. No, I’m kidding, man, my post amateur, professional career wasn’t that great. In fact, it was pretty much nothing. I am probably at the forefront of leading the pack of dirt bike racers who thought they would make it big, but things didn’t work out.

Well, one thing is for sure, the lights will eventually go out for everyone’s career, but for some, it happens sooner than others.
That’s for sure. So, for me, I have my own company. I manage and run Segway Pittsburgh. We do guided tours of downtown Pittsburgh. We have given over 50,000 tours to people over the past eight years. It’s a seasonal business, and we normally wrap up for the year in November. So right now, we’re off and I can relax and work on other projects.

Well, that’s certainly something different!
Yeah, it is. So right now, it’s basically time to go over the season, look at what we can improve and plan for next spring. I’m also a musician as well. I can play several different instruments. But my big interest is that I perform on the gong. I have a small group and we do relaxation and rejuvenation sessions through what’s called “silence of the mind.” We are just getting it off the ground and following the art, which is thousands of years old.

Wow, now that is really different! How on earth did you fall into that?
Well, I went through a lot of injuries myself, and that’s how I got into it. I was so banged up from racing dirt bikes and all the injuries started to take a toll on me. Now this music has provided me with a chance to do something no one has heard of before. We still have a long way to go but it’s still very cool. My coach, Don Conreaux, has been the main influence. He has been performing and teaching the gong for over 40 years, and he travels all over the world to perform.

The music is especially popular in Europe and China, and is definitely an art form, and people have been playing it for over 7,000 years. It’s pretty crazy, I am mechanical by nature, and I really liked learning something new, and becoming a musical performer.

What type of person is attracted to this music?
So our big thing is the yoga/Zen movement. I have worked on a Prison Yoga Project and several other similar groups. We look toward groups like addiction recovery centers, retirement homes, and physical therapy offices, and feel that clients of those practices would benefit and grow from hearing our music.

Overall, our music and meditation provides rejuvenation experiences that offer a whole lot of rest in a little bit of time. The practice offers you the same rest you get when you sleep, it is just learning that the same sequence is available through proper mediation techniques.

I’m excited to start sharing this with some of the moto guys. Because the moto guy in me is always looking to lower lap times, and increase performance. It is really crazy to understand how close they are related, meditation and yoga and athletic performance.

What about your personal life? Are you married?
Nope. I’m not married and I don’t have any kids. But I have been building a house and music studio here in Pennsylvania. When it’s done, it will be a gong and yoga studio as well as my home. The buildings are geodesic dome structures, and one is the house and one is the studio. Those structures are the perfect sound chambers, so I’m hoping it will be awesome. We have been working on the house for five years now. I’m doing it myself, and it has been tough. Anyone who builds knows that your first project is tough as you’re learning on the fly. But we’re making progress, I actually started camping there recently, so technically I guess I’ve moved in. Both structures should be fully open this summer, and have become somewhat of a landmark in the neighborhood. They look like igloos, but the neighborhood really supports them.

Going back to motocross, do you still follow the sport?
For sure. My good buddy Karl Fauser has a son that is racing, and he is going pretty fast. His son is named Luke. His dad is a long time friend of mine, and I have been going to his races and trying to help out as much as I can. In fact, we’re thinking about going down to Matt Walker’s place [Moto X Compound] this winter. I still ride a little bit, maybe once a month or so, and I would love to do Loretta’s again, but we shall see.

Tell me a little about your career?
My amateur career was successful, and I didn’t have too many injures early on. I won some 15 or 16 championships, but then when the time came, the transition to professional was really tough. I was already burned out and my body was fatigued. And I was tired of not making money. In 2005 and after breaking my leg, I basically quickly came to a cross roads in life, and I realized dirt bikes were not a reliable source for an income. But some of the highlights were winning a qualifier race for the National at Steel City, as well as winning two championships at Loretta’s. It just got to the point where it was hard to show up strong mentally and physically. In order to make it at the top, you really need to be on your best level of performance. My personal life was not that stable, and it fizzled out fast.

How was it making the decision to walk away?
Well, it wasn’t a bittersweet ending or anything. I just knew I had to do something different. I did go through some confusion, maybe six months, then I decided to try off-road racing. But then I had a bad accident here near my house, I hit a tree with my head, and smashed my skull and broke my femur again. I was choking on my own blood and passed out, and nearly died. That was a big eye opening experience, and from that point on, I was all about relearning what I could do. I started the Segway Tour business in 2009, and that got the ball rolling for a new career and income. I then discovered the gong in 2012, and have been chasing that with all the passion that I used to put into motocross.

Your dad was always involved with your racing and was a colorful character. How is he doing?
Oh yeah! My pops is still in my life, he is doing well. He still operates a ATV/UTV repair shop out of his garage. He loved to have a good time and was always very helpful to many people. So lots of people, I think, have good memories of him. He still goes to races to hang out and enjoys the sport. Any excuses to be around dirt bikes, he will find.

It seems like there was a period where you had a ton of fast guys coming out of District 5 and Western Pennsylvania. Why is that, and do you see that continuing?
Yeah, you had Branden Jesseman, Davey Yezek, myself, Broc Hepler back in the day. I would say from my experience, riding around in this area as a kid, the off-road trail network that we had was amazing. It is really advanced and technical. So before guys got onto a track, they were already good at the basics. That, compiled with a real strong local scene. Big Dave Coombs really did a good job, he was the guru of dirt for this area. He had two nationals here, and every weekend all the local tracks were good. As for seeing it continue, I don’t know, I sure hope so. I know we have some fast kids, but time will tell. I guess that some people are saying the local races are hurting a bit, and that mostly there are only a few kids racing nowadays. I hope to be able to bring some back into the sport myself, and to be somewhat of an ambassador for the sport, as it has given me so much.

You were close with Branden Jesseman growing up. He pretty much disappeared from the sport when he stopped racing. Are you guys still in touch?
Not that much. But I did stop by his dad’s shop a month or so ago to say hello. He wasn’t around, but I think he’s doing well. He works with his dad now, but I haven’t seen him that much. I know he is married and has a great wife and I think three kids now.