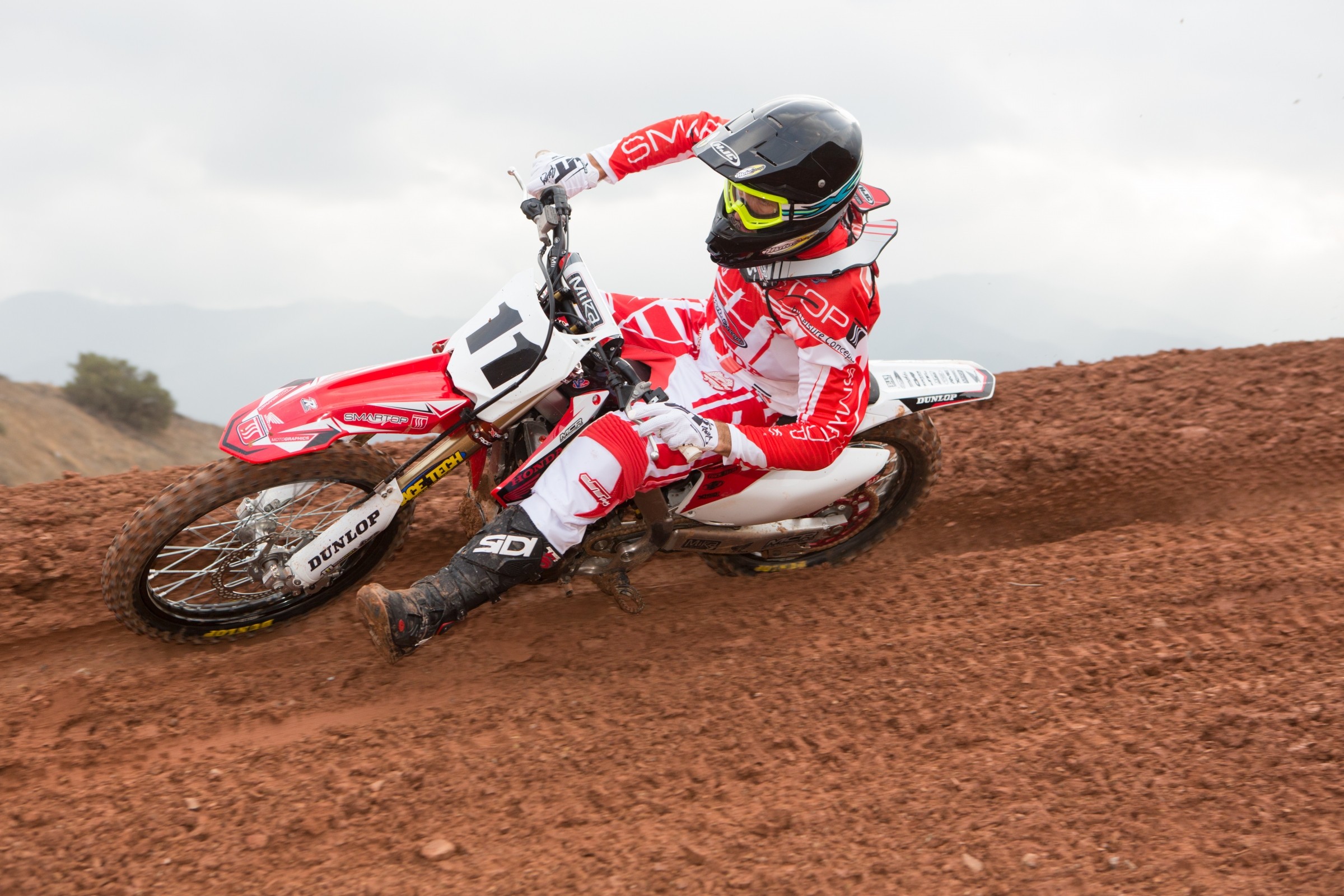 Redux How Kyle Got His Ride Back

The Mike Genova-owned, Tony Alessi-managed SmarTop/MotoConcepts Racing team has definitely been involved in its share of controversy through the years, and the team seems fine operating with an outsider status. But you can’t slam what the team has done for 2017, creating jobs at a time when good rides are increasingly hard to find. Justin Brayton has been added to the team alongside the returning Mike Alessi and Vince Friese, Cameron McAdoo has a ride in the 250SX East Region for his rookie pro season, and now Kyle Chisholm has become a late addition with a 250SX West Region ride. Chizz rode for the Rocky Mountain ATV/MC team last year, but that team is no more, as Rocky Mountain has moved its money over to Forrest Butler’s [formerly BTOSports.com KTM] team. Chisholm was expecting to go the privateer route with his 2016 teammate Bracken Hall, but he was considering dropping back down to the 250 class. When he got approved by the AMA to do so, Genova and Alessi were interested in helping.

“Honestly it really all happened in like 30 minutes, and then within three days from the time it started getting talked about I was at the team intro last Tuesday,” says Chisholm. “I put an appeal with the AMA to be able to race a 250 back in October, right after Monster Cup. I was just waiting and waiting, finally the day before I left to go to Switzerland [Geneva SX] I got the approval. While I was over there I just noticed that you guys posted the press release of the MotoConcepts team for 2017 and there was nothing about Freddy Noren being on the 250 West Coast. I had heard that’s what he was supposed to be doing.”

Chisholm’s wheels started turning. Back in October, when he requested the AMA allow him to race the 250 class, he sent out a tweet about the process. Tony Alessi saw the tweet and immediately texted Chisholm saying, “Let me know the outcome of that.” Chisholm texted Tony that he had been approved, and asked if they were interested in hiring another 250 rider. Alessi explained that it hadn’t worked out with Noren, and he would ask Genova if they could make another spot for Chisholm. Within 30 minutes, Genova and Alessi texted him an offer.

“I like Genova,” says Chisholm. “I rode for him for two years back in like 2010 and 2011, and I’ve gotten along with him good ever since. Even since then I’ve talked to him pretty regularly and stuff. I’ve also known Tony forever. I asked him about a ride and he said, ‘Genova loves you. He said yes.’”

Of course, this all hinged on Chisholm getting approval to go back to the 250 class. That’s a hot topic these days thanks to Steve Matthes’ piece about the 250 class on this website from two weeks ago. In this case, though, Chisholm isn’t taking a ride from anyone. MotoConcepts wasn’t going to hire someone else to ride a 250 or a 450. They were only going to add Chisholm for a 250 slot.

“I think they didn’t need to have another 250 guy or anything like that but I think my relationship with Genova helped,” he says. “Somebody like Genova, he’s racing because he wants to. Spending probably a lot of his own money. So if he wants to work with somebody, he can do it, he’s not set to maybe a certain budget. Definitely thankful for him for kind of making a spot for me.”

Chizz had been trying for years to drop back down to the 250s, but the AMA had rejected his previous requests. Chisholm lined up as a 250SX racer for three seasons—2006, 2007, and 2008—but missed all but one race in ’07 with a broken heel. In all, he estimates he’s raced about 12 250SX races [Ed Note: According to the Vault, Chisholm scored points in 12 races in his 250 career from 2006-2008], which, by the way is around the same number of 250SX starts as Phil Nicoletti, who the AMA recently allowed to drop back down. Neither Chisholm nor Nicoletti had actually pointed out of the 250 class, but both had gotten full-time 450SX offers early in their careers (Chisholm with L&M San Manual Yamaha, Nicoletti with N-Fab TiLube Yamaha) and voluntarily moved up. However, AMA rules say if a rider finishes top-20 in 2015 or 2016 in 450SX points, he cannot return to the 250s. Chisholm finished 14th in points in 2015 (Nicoletti 19th), but neither rider finished inside the top-20 in 450 points in 2016.

At the Monster Cup, Chisholm heard Nicoletti’s request to return to the 250s had been approved. He decided to make another request for ‘17.

"I feel like there’s no reason I’m not in the top-10 but I’d like to be a top-five guy and maybe get a podium at some point."

“I didn’t really say it [reference the Nicoletti case] but that’s what I was thinking in my mind,” he says. “I was thinking, There’s no way you’re going to tell him yes and me no.”

Now that his 250 ride is real, it’s time to think about how well he will do on the bike.

“The last time I rode a 250 in supercross was 2008 so it’s been a pretty long time,” he says. “But honestly the bike feels really good. It’s hard because I don’t really have anything to compare it to because it’s not like I’m coming off of another 250 onto their 250. I’m coming off a 450 so no matter what it’s going to feel slower than what I’m used to. But honestly for what I can imagine a 250 feeling like, it feels really good. I think their track record and their guy that does their engine and stuff, they get good starts normally. It seems like they do a good job with their bikes.

“I think the hardest thing for me is just the adjustment to the 250 in supercross. Outdoors it’s not as big of a deal because you’re just kind of wide open, going for it. Jumping jumps isn’t that important. But in supercross, timing and what gear you need to be in and how hard you need to get on the gas to jump stuff is obviously a lot more important. It’s just way different on a 250 than a 450. So that’s the biggest adjustment for me is just getting used to that feel of the power of the 250. Somewhere I’ve heard the Hondas, they’re a bike that you kind of ride in a higher RPM. And I already don’t really rev the bike a lot anyways. Plus, I’m coming off a 450 so it’s like a real adjustment for me to rev the bike like that. It will take a little bit of time. I wish I had more time to be ready, but I feel like it’s a pretty good start just from the first two days I’ve rode it.”

A few weeks ago, Nicoletti referenced past riders who dropped down with success—like Nathan Ramsey and Grant Langston—as proof that the 450-to-250 switch can work. Chisholm isn’t sure how he can do, but he can make some rough guesses.

“I think I can do good, but honestly I don’t know,” he says. “I feel almost like a rookie again, like a new, fresh start. I think a little bit of that youthful craziness, kind of close your eyes, hold it wide open, and hope for the best, I might lack a little bit of that where most of my competition doesn’t. But then I think obviously my experience, especially in supercross, I’m hoping that outweighs maybe that little bit of raw, crazy speed of the younger guys. In the 450 class my goal was always top-10. I know when everyone’s healthy that’s tough. There’s 20 really good guys, but I still always found myself on average between 10th and 15th on a 450 even against a lot of fast guys.

“So for the 250 class, I feel like there’s no reason I’m not in the top-10 but I’d like to be a top-five guy and maybe get a podium at some point once we get going and stuff like that. But I might be way off, or I might be battling up front for a podium. I don’t know! One example I kind of made was in 2015 when I did my own thing on the Kawi, I think it was the last couple East Coast races, I remember I think Shane McElrath, he was getting podiums on the 250, winning heat races, stuff like that. He came over and did a couple of races on a 450. I know at New Jersey, and it might have been another one, I think I beat him at both of the races that I raced him. I got like eighth or ninth that night, maybe he finished two spots behind me. Not saying I’m a better rider than him by any means, but I was like, man, I beat that guy and he gets podiums on a 250—what if I could ride a 250 and be a podium guy? I’m kind of just as curious as everyone else is to see how I do.”

SmarTop/MotoConcepts Racing has now grown from a two-rider effort to a five-rider effort. The tough rider job market has left Genova with a chance to grab some new talent, and also talents like Brayton, McAdoo, and Chisholm have an opportunity to move forward instead of struggling on their own. Chisholm will even have a chance to put his own 450 together to race some East Coast races if he likes. MCR’s 450 program is full with Alessi, Friese, and Brayton, but the team says it will help in any way it can, so Chisholm can keep getting to races and making purse money. Overall, he’s much better off now that this deal has come along.

“I think the thing with Tony, and Genova, maybe some of their ideas are out there a little bit and this or that, but one thing that’s for sure is they both put 100 percent into the program that they run,” says Chisholm. “Especially having Tony in your corner there’s not going to be a lack of effort by any means. For me it’s nice to be able to focus on just showing up at the races and doing my job during the week and everything else is taken care of. It’s a nice, refreshing little change, so I’m looking forward to the whole year.”