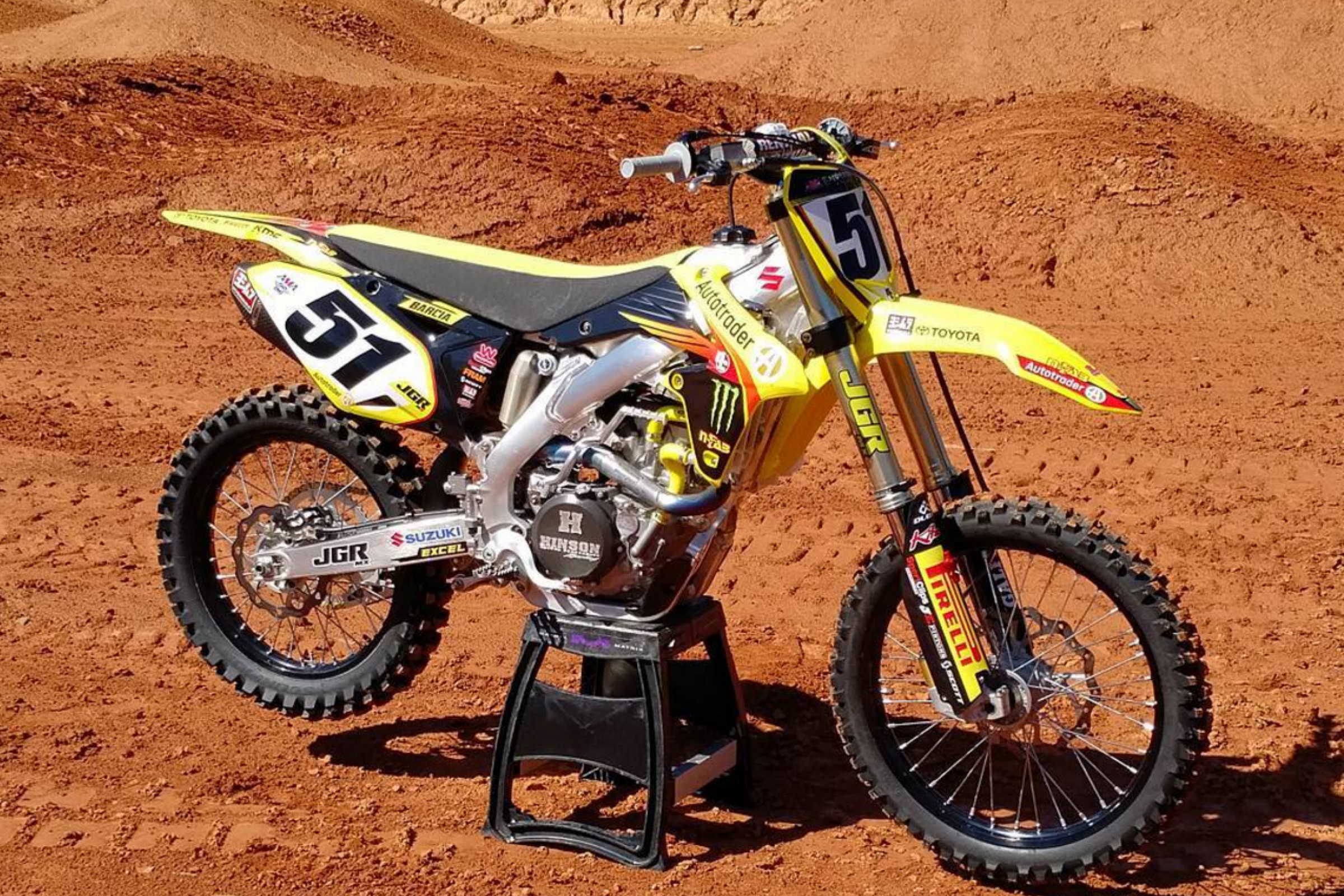 Steve Matthes: Roczen switching to Honda is a pretty big deal, but I’d say this announcement of JGR becoming affiliated with Suzuki is on that level. This is a big deal for Suzuki and for JGR. Coy Gibbs and his guys have been with Yamaha since they debuted in 2007 and just think about all the R&D they have with the blue bikes. That’s all gone now as they need to learn the ins and outs of the Suzuki RM-Z450. And Suzuki rebounds from the loss of the Yoshimura team with three top-notch 450 riders. My sources tell me that it wasn’t that Suzuki came in and blew Yamaha’s offer for JGR out of the water. Rather I hear that JGR took less from Suzuki as relations between JGR and Yamaha have been strained over the years. Maybe the last nail in the coffin was Yamaha securing Cooper Webb when it looked to be a natural fit for the new #2 to go to his hometown team.

Will Justin Barcia, Weston Peick, Phil Nicoletti, and the rumored 250SX guys do better now that they’re on Suzuki? I’m not sure. The Yamaha is definitely a different machine compared to other manufacturers, but JGR showed they can win motocross races on the YZ450F with Barcia. I do think the RMZ is better suited for supercross than the Yamaha but I guess we’ll see. The Suzuki won’t be as fast as the Yamaha, but it will handle better so maybe this is a saw-off. So good for JGR, great for Suzuki, and a bad deal for Yamaha—that about sums it up, right? I’m excited to see what these guys can do in 2017.

Jason Thomas: Well, the news is finally official. JGR has made the jump from Yamaha to Suzuki after nine years on blue. It’s surprising in some ways, but was predictable in others. There had to be some serious discussions about the cause and effect of such a big switch. This is a multi-layer move that will involve an incredible amount of work and money to transition smoothly.

Think about how much equipment JGR has amassed over the last several years that is now basically useless. They have countless bikes, works suspension sets, engine parts, chassis parts, wheels, and so on. That doesn’t even include the possibly millions of dollars spent on R&D to improve performance. JGR jumped in with both feet to make this Yamaha partnership successful, and that’s all water under the bridge at this point. Knowing all of that work is now irrelevant had to be tough to swallow.

Starting just a week ago or so, JGR had to get to work on the Suzuki. They will have to put all of their time and effort into making this bike as good or better than equipment they had just spent years improving. With only 10 weeks before Anaheim, that’s a tall order. Back in 2012, the JGR guys spent significant time with Michael Byrne, Matt Goerke, and myself on the BBMX Suzuki’s, so they will have some background data to pull from. That is one upside of Suzuki not drastically changing its 450. I think JGR will have their work cut out to produce the same engine performance that they previously enjoyed, though. The stock Yamaha is such a superior engine to the stock Suzuki in its current state, making the same factory level engine a much more difficult level to attain with the new machine. The chassis may be a step forward for supercross, however. The Suzuki has long been known as a turn-friendly chassis, making the tight confines of supercross much easier to tame. That’s why James Stewart begged the JGR engineers to make the Yamaha more like the Suzuki back in 2011. He wanted a narrower, easier to turn chassis, allowing him to be more aggressive on a supercross track. That’s where I feel they will be with the bike.

The more interesting parts of this deal to me were the intricacies of the contracts. Justin Barcia’s big money deal included Yamaha, so I would think that took some lawyer consultation to finagle through. There’s also the Cooper Webb aspect, as JGR was a long time sponsor of Webb in his amateur days. JGR surely felt that they should be the team to bring Webb to the 450 class, being a Yamaha factory team. Yamaha absorbing Webb into the team Chad Reed assembled for 2016 had to be a source of tension. While there were several other issues between JGR and Yamaha, I feel this Webb signing was the final catalyst for change. It’s tough for partnerships to work when one hand is working to help you and the other hand is competing against you. That has been echoed over the years in the Yamaha/JGR partnership and was a big factor in this move.

Jason Weigandt: Call this a fresh start initiative for both Suzuki and JGR. For quite some time Yamaha and JGR made for a perfect marriage, especially since JGR's long-time sponsor, Toyota, also has a relationship with Yamaha, and then even more so when JGR became Yamaha's main 450 effort.

But a few things have changed. Yamaha now has its own factory team again, so the budget to support JGR isn't what it once was. Yamaha did make an offer for JGR to stay, and I've heard it was better than what Suzuki was able to offer. But JGR must want a fresh start, and the time was right at Suzuki.

That brand has been going through major changes behind the scenes, and it's also out of the automotive business in the U.S. now. The Yoshimura Suzuki team is gone, Suzuki is willing to let JGR build its own bikes at its North Carolina shop, and now the brand gets capable riders out on the track riding RM-Zs for not a ton of money. A few years ago, JGR approached Suzuki for a deal when it was trying to get James Stewart on board. Back then they couldn't work the deal out. Now the time is right.

Whatever. Those are just the business dealings. What this really does is show how all-in the Gibbs family remains in dirt bike racing. When Coy Gibbs moved over to work more closely with JGR's NASCAR operation, there was probably fear the MX side would no longer get the same support. Well, staying with Yamaha would have been cheaper and easier. This is a sign of how hard the Gibbs crew is willing to work to make this motocross thing work.

Will it? Well, guessing which bike is better is the oldest game in the offseason business. Will Ken Roczen be better on a Honda than he was one Suzuki? Will Justin Barcia be better on a Suzuki than he was on a Yamaha? Those are the hardest questions to answer. Clearly JGR thinks there's a reason to switch, well beyond dollars and cents, and I'd say it also goes beyond just the bike. Remember this is supposed to be a long-term relationship, so you can't make this type of plunge just comparing bikes. That stuff could change as quickly as the next model year.