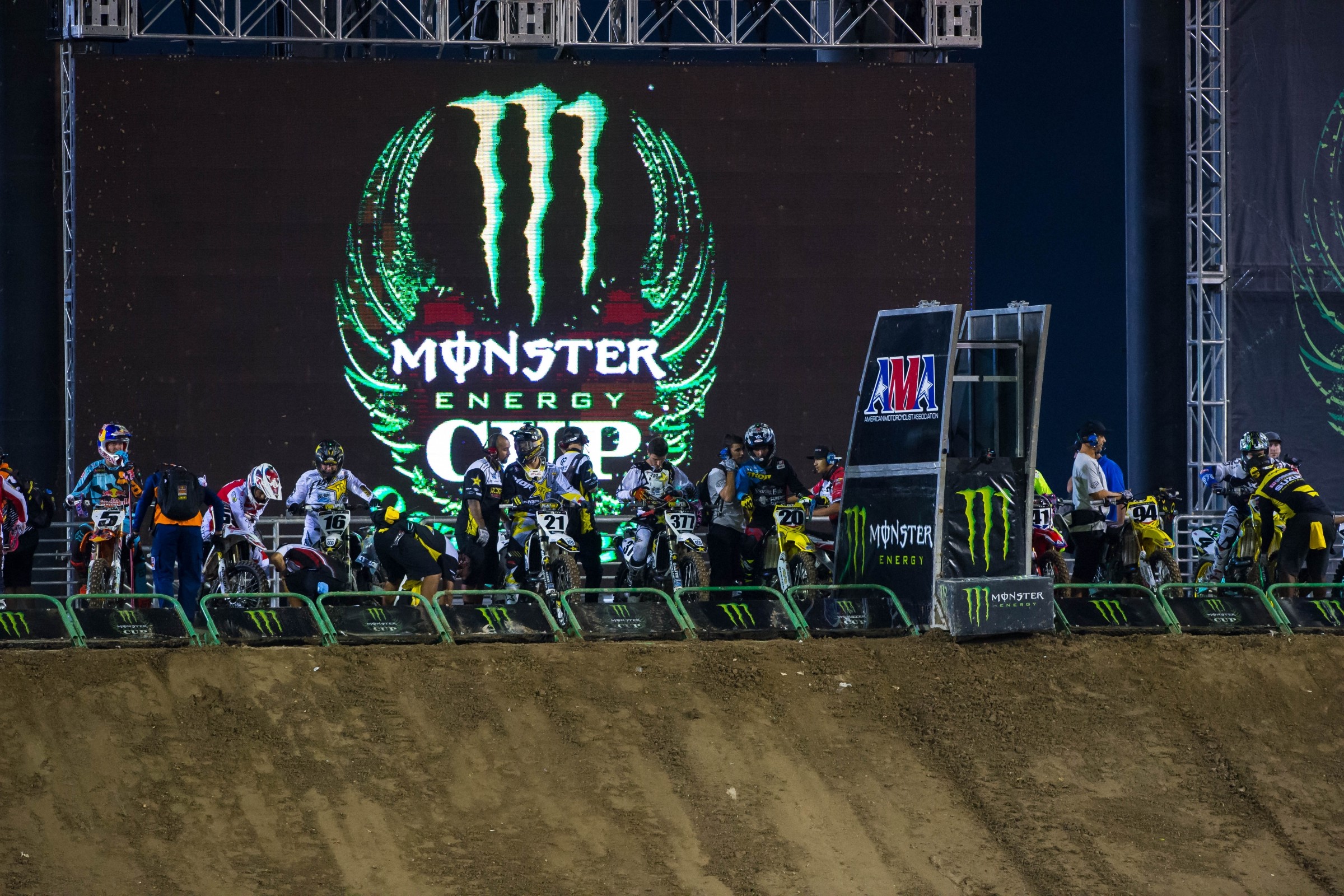 Viva Las Vegas! After five months away, the supercross world returns to the desert. The Monster Energy Cup represents this weekend’s reason for everyone to go enjoy some fun in the sun. For most, this is a no-pressure race that serves as a barometer for the following season. Several riders will debut with new teams and equipment, giving them real feedback in a race environment. It’s difficult to get race-atmosphere testing during November and December, so this race can be critical. There will be many technicians leaving on Sunday morning with a list of things they need to improve and focus on in the coming months. In many ways, I look at this event as a huge test session for the championship-level riders more than anything else.

The biggest draw of this weekend has to be the Honda HRC debut of Ken Roczen. Everything Kenny has touched in the last few months has turned to gold. This summer was the most impressive of his career. He won an incredible 20 of 24 motos, making the Lucas Oil Pro Motocross Championship look, well, kinda easy. His high-profile switch to Big Red has the pits abuzz, giving the factory Honda team its best chance at a championship since Ricky Carmichael’s 2004 departure. I say the factory team because Kevin Windham (2008) and Chad Reed (2011) were both close as well. The team has been in dire need of a Ken Roczen-level contender, and now they have it. Trey Canard was Honda’s best hope for several years, but the injury bug never seemed to release its grip from Red Bull KTM’s newest signee. Kenny was the big fish this off-season and is considered by many to be the most marketable rider on Earth today.

The MEC track is always a bit different than a standard supercross. Most notably, the Joker Lane makes its annual appearance and the whoops make their annual disappearance. The Joker Lane—which riders must take once per race—has been more of a factor in recent years than many would have predicted. With champions like Ryan Villopoto and Ryan Dungey both failing to take the Lane at different times, it’s easy to see that it presents a unique mental challenge. At no other point in their careers do riders face this type of obstacle. Riders become “locked in,” if you will. Breaking them out of that intense focus is a tough job for the mechanics but a necessary one at this event. Most mechanics usually hope to maintain their rider’s focus and block out everything else; this weekend is the complete opposite. When do I take the Joker Lane? from a rider and Don’t forget to take the Joker Lane from a mechanic might be the most repeated phrases of the weekend.

The rest of the track is typical Monster Energy Cup (excluding the 470-foot, elevated start, of course). Several rhythm sections and lots of fast straightaways and sweepers are a given. I believe the lack of whoops and the fast layout are an intentional decision to entice European riders to participate. Big supercross whoops are too much to ask for the non-supercross-racing world to sign up for. They don’t practice anything of the sort, making it a bad idea in general. Keeping the track safe and fast opens the door for guys like Tim Gajser to want to race (yes, I know he backed out, but he was in until the injuries). The goal has always been to expand the rider lineup for this event, and the easier track is one of the best ways to open the door.

Coming off of his outdoor title and a big team switch, Ken Roczen should be feeling like the big man on campus. He was your 2015 Monster Energy Cup winner and will surely be one of the favorites this Saturday.

Eli Tomac is a former MEC winner and looked fantastic at the two USGPs he raced last month. His starts are suspect, though, and bad starts at this race are catastrophic.

Ryan Dungey is a bit iffy on the heat meter, but he did win the supercross title and then won the SMX Cup last weekend in his first race back from injury. I have a feeling we’ll see him on the podium once again in Las Vegas.

With RCH Suzuki in rider limbo, JGR switching to Suzuki, Cooper Webb most likely sitting out, Jason Anderson injured, Tim Gajser staying in Europe, and both of the Stewart brothers without a ride, several supercross stars will be missing. With stars like Roczen, Tomac, Dungey, and Reed still racing, the show will still be just fine.

James Stewart misses his flight due to weather problems.

The starting gate malfunctions at least once.

Ken Roczen wins the overall in his Honda HRC debut.

Someone forgets about the Joker Lane. Again.

Chad Reed is a factor for the podium, but a whoop-less MEC track hurts his finish.

Feld holds their breath on every start, hoping there are no scary crashes due to this experiment.