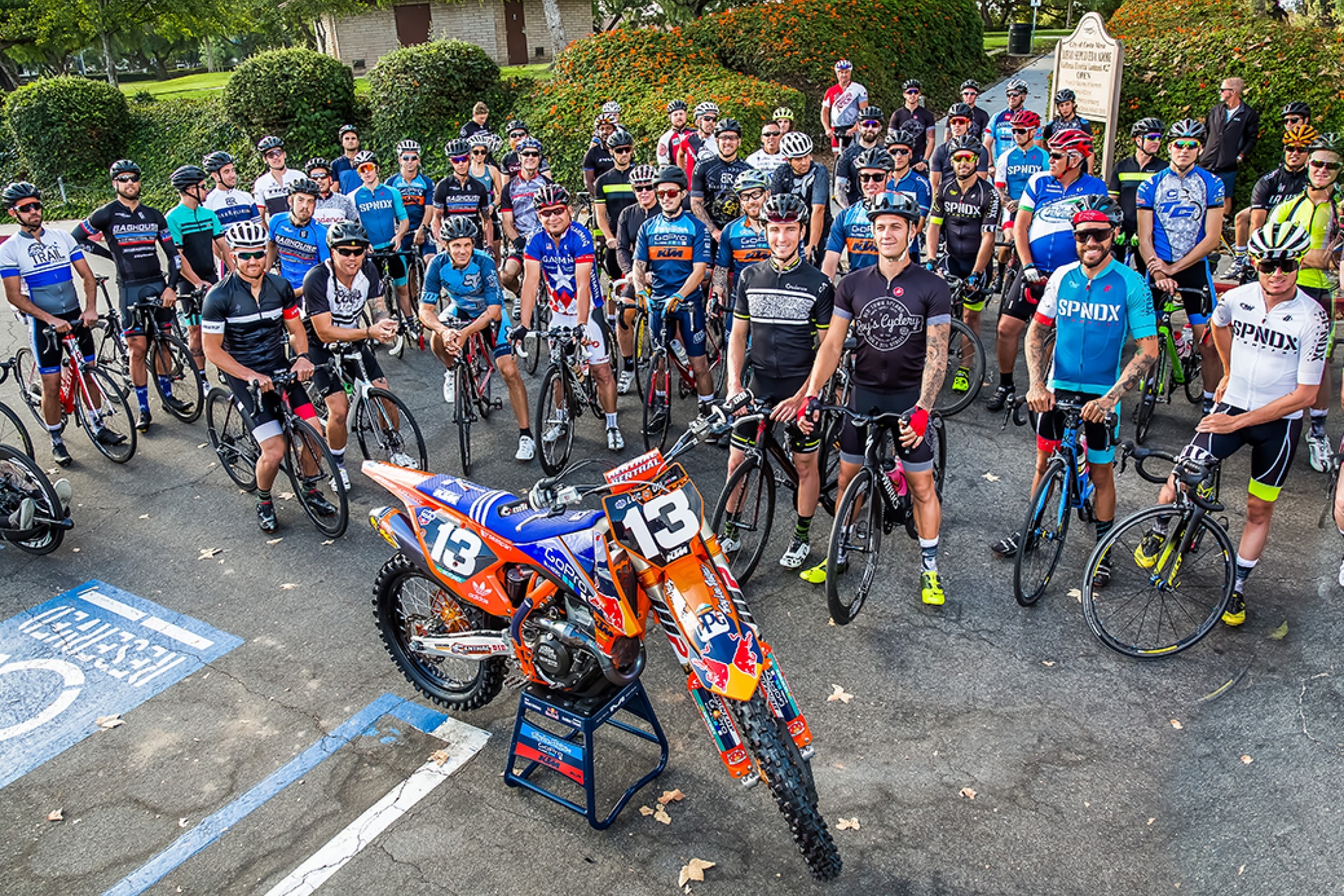 Motocross is dangerous, and even the best of the best aren’t immune to serious injury. We saw that when Jessy Nelson suffered a bad crash at Unadilla, which so far, has left him without the use of his legs. But if there’s a silver lining, it’s that the motocross community is tightknit, which was on full display at the Bike4Jessy bicycle ride that recently took place to raise money for Nelson’s medical costs. To learn more, we spoke with event organizer and friend of Nelson, Christian Craig.

Racer X: How’d the ride go?
Christian Craig: It went awesome, better than I thought it would. I was stressing out on how it’d end up going—we ended up having more riders than we thought we would initially. We said 50 riders online, but we got 50 riders within the first night! I talked to some more people and we decided to do a 100. It’s just more money for Jessy. I was nervous because I wanted to make it a fun ride and keep everybody close and in a group. Sometimes you get people who want to take off and go fast, but I reminded everyone when we got there to keep it fun, chat, and laugh. It ended up really good. We had some cool sponsors too, like Ryno Power, Roy’s Cyclery, Better Buzz Coffee, they all came on. We made a lot of money, a lot more than we thought we would. Every dime of it went to Jessy too, and I’m glad we could do something like that for him.

Keeping everyone in a group seems like it would be hard when you have pro athletes mixed with average Joes. What’s slow for you guys might be a ridiculous pace for regular dudes.
That was one of the biggest concerns. Sometimes people sign up for this stuff and they don’t know what they’re getting themselves into. I didn’t want anyone to show up unprepared on a beach cruiser! We made it clear it was going to be a two-hour bike ride that you needed to be prepared for, and we didn’t have any issues. Me and Cole [Seely] were leading in the beginning, and to look back and see the train of riders following was pretty awesome. We averaged about 16 miles an hour, which is really easy for someone who does it a lot, but for some people, like some of the mechanics who came, it’s hard for them. They don’t usually ride bikes because they’re always busy working on the bikes. We might not be tired, but the guys who don’t do it all the time might be. That’s why we tried to keep it fun for everyone, and I think we succeeded. There weren’t any crashes or anything like that.

Things like this are of course about raising money for huge medical bills, but is it more than that? Is it also about showing Jessy that you guys have his back?
Yes. Giving him encouragement is really important. My wife set up a Snapchat account and had him follow it, and we tried to document the whole day for him. It was cool, and some media guys came out and made some videos too. I hope he’s happy watching that stuff. I remember Jessy and I did a group ride the Sunday after Anaheim 1, and he and I rode together the whole time laughing, joking, and talking about old days. It’s just… I hate thinking about how fast the tables can turn. It sucks for sure. I’ve been through something similar, not as bad, and people were always there for me. Every time I saw Jessy at the track or at a race, he was always smiling. Always smiling and happy. A great person to be around. I want to try to do everything to keep his spirits up. I know how bad it is and how bad it sucks. Your life changes. It hurts me to even think about it. I get a stomach ache just thinking about it because I know what he’s going through.

Take us through your injury for the readers who might not know about it.
I broke my back in 2009. The bike locked up practicing for Anaheim 1 and I lost feeling in my legs for what seemed like forever but it wasn’t that long. When I was laying on the ground at the track I had no feeling below my waist. Luckily, once they put me on the backboard, it straightened out my spinal cord and brought a lot of the feeling back. It was one of the scariest things I’ve ever been through and I still think about it to this day. It’s so scary not having any feeling, thinking about all the things you’ll never do again. Thinking you’re going to be in a wheelchair forever is one of your worst nightmares, but it’s part of racing. It sucks it happens, but it’s the risk we take for the sport we love.

It’s kind of crazy that we all just keep riding dirt bikes.
Yeah, you’d think hearing about this kind of thing even once, you’d be done. It can happen to anybody, Jessy is one of the most talented riders out there. Just one little mistake, the bike hits you from behind, and that’s it. You can have the biggest crash and get away with it, but the smallest crashes, when you think nothing will happen, is when it happens. It’s scary and I wish it wouldn’t happen to anybody who rides. It’s the worst thing that can happen and you don’t wish it on anyone.

How’s Jessy doing?
I have yet to see him since he got home a little over a week ago. I only live 20 minutes away but I know his whole family, girlfriend, and a bunch of people are all over there. He’s got tons of people who want to see him so I’m waiting for things to calm down, so he can get used to being back home, before going over there. We’ve texted back and forth though and he tells me he’s in a bad place sometimes. I understand, I know where he’s coming from. I was saying the same thing when I was hurt. You don’t know how much you take just being able to walk for granted. You learn that when you’re one or two. When you get that taken from you, you really realize how much you want it back. I’m just trying to keep his spirits up. There’s going to be dark days and there’s going to be good days. I hope he has more good days. He has to keep pushing through and never give up. There’s always a chance to get better. I hope he can walk again soon.

He’s lucky to have a group of friends to look out for him, especially someone who’s been there before. What was his reaction to the ride?
He said he was tearing up and wished he could be out there. It would have just been overwhelming though. I think he was happy with it all—the money we raised and the support he received from guys like us who have raced against him, to fans he’s never even met before. It’s cool to see the love and support people have for him, as well as the impact he’s had on other people. It’s something to look back on and realize how much love I have for him.

Wow. What a day! #BIKE4JESSY was a hit. So awesome seeing the moto community come together to support one of our guys. Thanks to everyone for coming out, we were able to raise close to 13k for Jessy and had fun doing it!

What’s the best way for fans to show support?
Social media, really. [Instagram - @jessynelson13, Road 2 Recovery] He’s pretty raw on social media. He posts about his rough days and good days, and you can see how things are going for him. You see the comments people leave too, and they’re all positive. He’s got a lot of fans who are thinking about him. I think about him every day, and hopefully I can see him soon. I want to keep his spirits and motivation up.

Speaking of injuries, you broke your tib/fib at the Glen Helen National. How’s that doing?
It’s been a rough injury for sure. When you break something like a leg, you don’t think it’s going to be that bad, but this was a compound fracture and I got a rod and screws put in it. To this day it’s still painful. If I overdo it, or ride too much, I have a limp for the rest of the day and it’s painful. I’m at the point, it’s been about four months, and the doctors are saying it should be almost fully healed. I’m still not fully healed, but it’s getting there and I’m getting my strength back. It’s been a rough go. I was riding after two months and it hurt too bad so I took more time off. I’d ride for a week then take a week off because it was hurting too bad. It’s been rough for sure, just trying to get back to normal. I started riding supercross this week though, just trying to get back into the swing of things, and my fitness is still there. I think I’ll be 100 percent come Anaheim 1.

So you’re racing the West then?
Not for sure, the team will decide in December. I live on the West Coast and it makes sense to race the West, but if the team needs me on the East Coast I’ll do the East Coast.