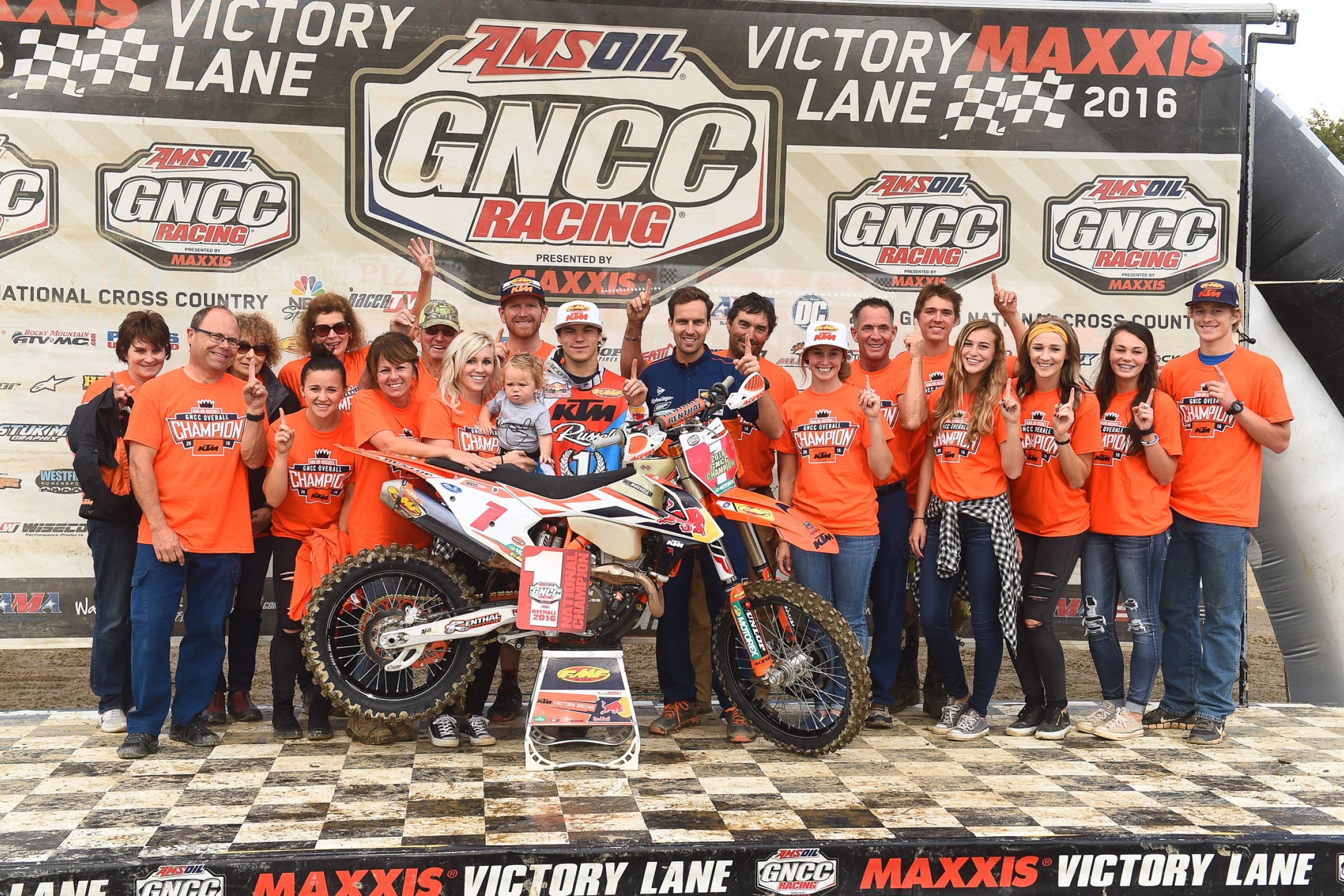 Rare is an athlete that not only wins, but wins in such a momentous way that he changes the game for all others that come after him. Such is life these days in the Amsoil Grand National Cross Country Series, which is a decade past what I call the Season of Change: Juha Salminen’s entry into the races for the 2005 season. Prior to the Finnish star’s import into America’s largest off-road racing series, the racing and strategy in the GNCCs was unlike most other forms of motorcycle racing. In these three-hour events, riders would hold back and study the trail, save energy, and play the strategy game. You’d often hear riders say that they “didn’t want to lead” early in the day, because anyone who tried to make an early break would either A) waste energy or B) see all that hard work wiped out by a crash or lapped traffic. So instead, everyone waited, hanging out with the lead pack, the whole thing building to a crescendo over three hours.

But Salminen was so good he didn’t have to play it that way. He just took off, led, and won his first race of his first full-time season here. He only lost his second race because a cyborg-with-a-soul named Doug Henry showed up for a Daytona Bike Week vacation, followed Salminen’s every move in the GNCC for two and a half hours, then burned one hard 30-minute lap at the limit to take the lead and win before collapsing at the finish. He summoned up the kind of drama, heart, and courage that only Henry can.

But Henry, especially in sand, isn’t human. The mere mortals that made up the rest of the GNCC starting line tried their tails off to shadow and beat Salminen, but he was the Jeremy McGrath of off-road. He didn’t just win, he changed the way you won: first grabbing the holeshot, then pulling away, then keeping the lead through lapped traffic, fatigue, and the rest. He went super fast but seemingly never crashed or made a mistake.

Sometimes there were challengers and challenges, but it was Juha’s world, really. In his second season in the U.S., Salminen won the first six races of the year, and led all but two laps at those races. That’s 18-hours of dominance when you consider each race takes three hours. Might I add that these were the economic heydays of motorcycle racing, with more factory rides and factory talent battling for GNCC wins than ever. But that didn’t matter against him.

Once Salminen had a second-straight GNCC title in hand, he reset his focus back on Europe. At the end of the 2006 season, he finally captured the one race that had eluded him, taking the individual overall at the International Six-Days Enduro. Then he went back to Europe full-time for 2007 and kept on winning.

His mark is still here, though. When Salminen was winning here, a young Kailub Russell was climbing the Youth and Amateur ranks (Russell was the GNCC Youth Overall Champion in 2005, Salminen’s first year in the U.S.).

Now Russell is winning in a fashion like Salminen. Even if he gets a bad start, he takes the lead immediately and usually holds it to the end. When he’s on, he’s untouchable. When he’s off, he’ll suffer some crashes and tip overs and make it interesting, but will usually win anyway. Over the weekend, he took his ninth win in the past 10 races, and with it his fourth-straight GNCC Championship. Russell is now 26 years old, and he’s second on the all-time GNCC bike overall win list, with 39 career victories. (AMA Hall of Famer Scott Summers is ranked first with 46.) In addition, last season Russell jumped into the AMA Enduro Series and won that title as well, making him the first rider to ever win both the GNCC and Enduro title in the same year.

As with Salminen, Russell has turned a series designed around variables into something controlled. There’s so much than can happen in off-road racing, so much than can go wrong. Yet, he just wins, baby. He’s also setting his sights on another goal: the ISDE. It starts next week in Navarra, Spain, but Russell is already over there inspecting the trails.

We’ve mentioned before that U.S. success at the ISDE used to be few and far between, but the team and organization has come a long way. I still say you can draw a line to Kurt Caselli’s success in this event to today’s U.S. effort, which finally culminated in the individual overall win for Ryan Sipes last year. Kurt railed and rallied at this race, and that helped inspire other talented Americans to realize they could get it done, too. That got the ball rolling, and then came team manager Antti Kallonen. Antti originally came to the U.S. as Salminen’s mechanic, then took over management of the KTM off-road effort, and now also runs the U.S. ISDE program (he’s also from Finland, traditionally a powerhouse nation at this event. Antti is the Roger DeCoster of this program in more ways than one).

Since Kallonen took over, the team organization has gotten better, and this year the crew even held a riding camp together in Arizona. This team can taste it. Last year the U.S. held the lead early until Russell, while battling for the individual overall lead, crashed out and tore his ACL. Sipes took control from there to become the first-ever American overall winner, but Team USA’s shot at the World Team Trophy was over. Australia won it in a controversial finish—France was awarded the win at the event, but later that decision was overturned and the Aussies were declared the winners. But it probably didn’t feel the same not being able to actually celebrate it at the event. Australia would love to do it again and actually take to the podium with the big trophy in person.

This year Team USA has run into its own drama because Sipes, in a heart breaker, just broke his arm on Sunday at the GNCC in Ohio. Just like that, last year’s overall event winner is out for this year. In his place, his young Costal Racing Husqvarna teammate Layne Michael was sent to Europe. Michael might end up on the Junior team (under 23) and current Junior team rider Steward Baylor could get bumped to the premier Trophy team. Or perhaps Michael will just slide right into Sipes’ spot. Either way, it’s a huge blow to Team USA.

But bad luck and injuries are always part of this event. I texted a bit with Russell yesterday and he said he thinks the team still has a good chance at it. In the meantime, I know he’s had ISDE revenge on his mind all year. Can he carry Team USA to its first-ever World Team Trophy at this event?

Now that really would be a game changer.