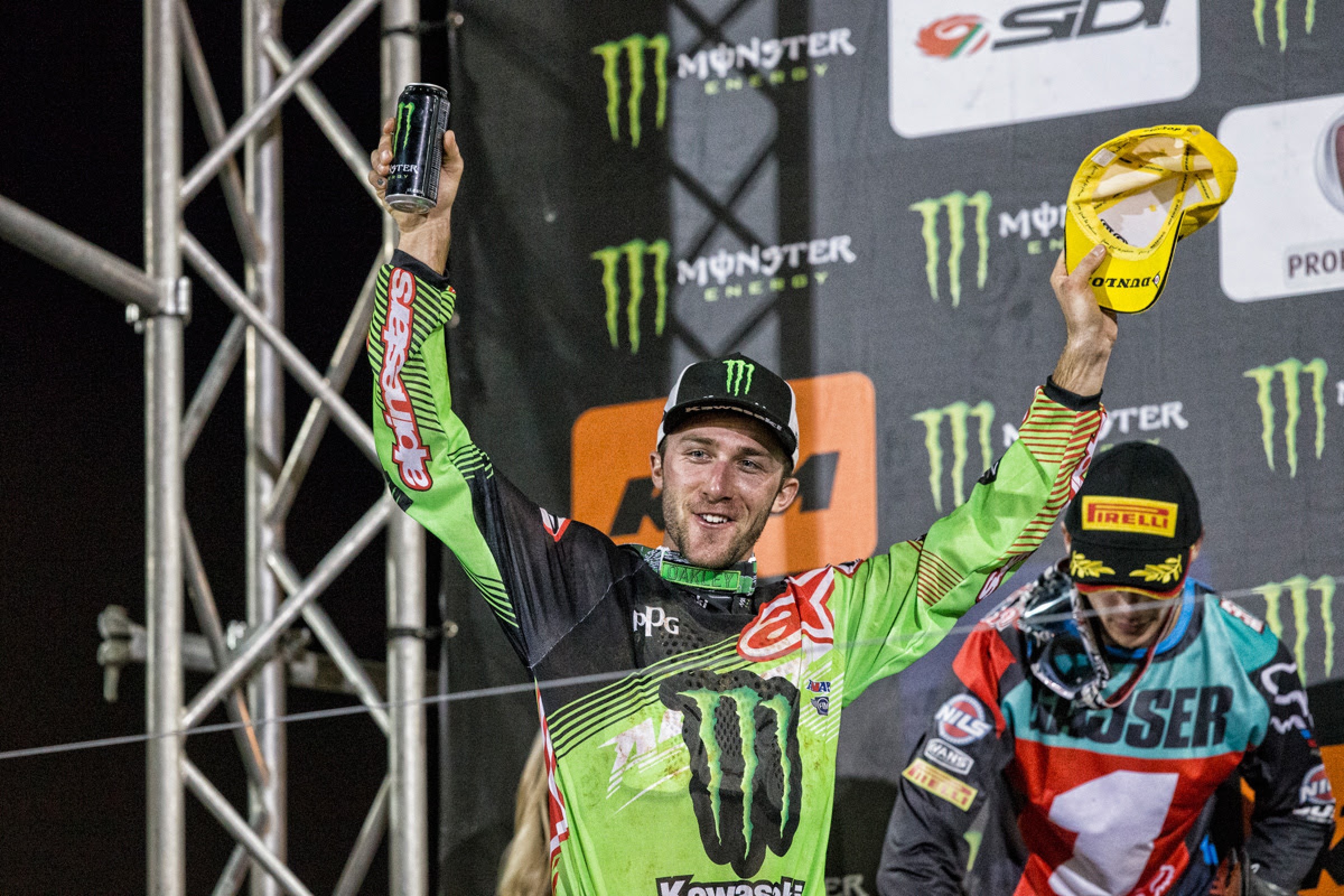 Monster Energy Kawasaki’s Eli Tomac went 1-1 on Saturday to claim the overall at the MXGP of the Americas at Charlotte Motor Speedway. It was a dominating performance by Tomac, who finished runner-up to Ken Roczen in the Lucas Oil Pro Motocross Championship. He talked about his night in the post-race press conference.

Racer X: Take us through it.
Eli Tomac: It was a great weekend. Started the whole day out well. Had really good practices. Was able to get clean laps in. That’s sometimes tough, getting a clean lap in. Going into the motos themselves, I thought it was pretty tough to see in both of them, just from different things. First moto it was the sun that was in your eyes. The second moto it’s a little bit tough to read the dirt with the lights. There were some shadows and ruts like that. So, different challenges in both motos. It was a pretty awesome day.

The first moto we saw you making some mistakes. Tell us what happened out there.
Just a little tip-over, slide out. I actually just leaned it over and just washed the front end out. I almost did the same thing the lap after that. I’m like, are you serious? What are you doing? It kind of woke me up. So it was a tough track to stay up on.

Here with the American media, all the fans behind you. You’re racing with the MXGP guys here. How has been so far your experience?
I had a lot of fun. We’re racing the same guys 30 other race weekends a year. Most of the time I only see them [the GP riders] once a year at des Nations. It’s fun to race against new competition and just to see the way everyone works differently and what everyone has to offer and what they’re better at and you see that all best in person.

Eli, there has been talk about a really long season, a lot of races. We really enjoyed having you. What’s the chances of seeing you at a USGP again next year?
It just depends on where it falls with our schedule at the end of our outdoor series. I actually had a lot of fun today. Just for the program, I know it was cut short a day. That might have made it a little bit easier. But I enjoyed the whole day. I think if our schedule falls in the right spot…it’s tough to say now if I’ll be able to do next year.

Eli, this was kind of a bit of a hybrid event, with it being a man-made track. How do you think it kind of worked? Especially with the track, the setting, everything like that?
It was [a hybrid]. It seems like you have motocross and then you have a Monster Cup style track and then you have supercross, and this is almost between Monster Cup and motocross. [Compared to motocross] We had the lights, there were some more jumps out there. Just a little bit shorter lap times than our typical American motocross tracks. It was okay. I think if you got a good start you could make passes. There wasn’t tons and tons of lines but for what it was, it was pretty good.

Eli, just talk about some of the differences between this event and the others you’re used to. The two-day format wasn’t a factor because it got rained out, but were there other things different? Loading up the gate and the way the podium works and even maybe the race format or the track itself?
I think the biggest thing is just the start of the race and just having the guys behind you on the gate. That was the biggest difference, and then obviously the practice. We had a full free one. In our schedule they time both. But overall I can’t comment a whole lot just because we missed that first day, which would probably be the biggest difference.

Where would you say that you made up time? It seemed like the lap times were pretty close between everyone, but then the first moto you won by I think 24 seconds and you were able to make passes in the second moto. Where were you making up ground?
I don’t know exactly where. I think I was pretty good in segment two, so wherever that was. I think it was kind of like the dragon back rollers across the start straight, heading into those rollers. I felt pretty good on the back half of the track.

When we all arrived here we saw the track and it looked really good but actually for racing it didn’t really produce a lot of really close racing. What did you expect when you saw the track?
I couldn’t believe what it turned into. The day before I was just like, man, this is going to be kind of a sloppy mess. The way the clay was I thought it was going to be really slick and sketchy. But obviously it was sealed pretty well and it turned out to be like a perfect racing surface, as good as you can have I think with that dirt. I think if we wouldn’t have had that rain it would have been really hard pack and really a different track. So if anything, the rain was good.

Just talk about the crowd. The American fans, it seemed nuts when you went over the finish line jump when you had the lead. Could you hear that?
Yeah. I haven’t heard that since maybe a big supercross or des Nations. That was pretty cool. There was some enthusiasm in there. Any time you hear that it just fires you up. It feels like you’re putting on a good show for the fans.