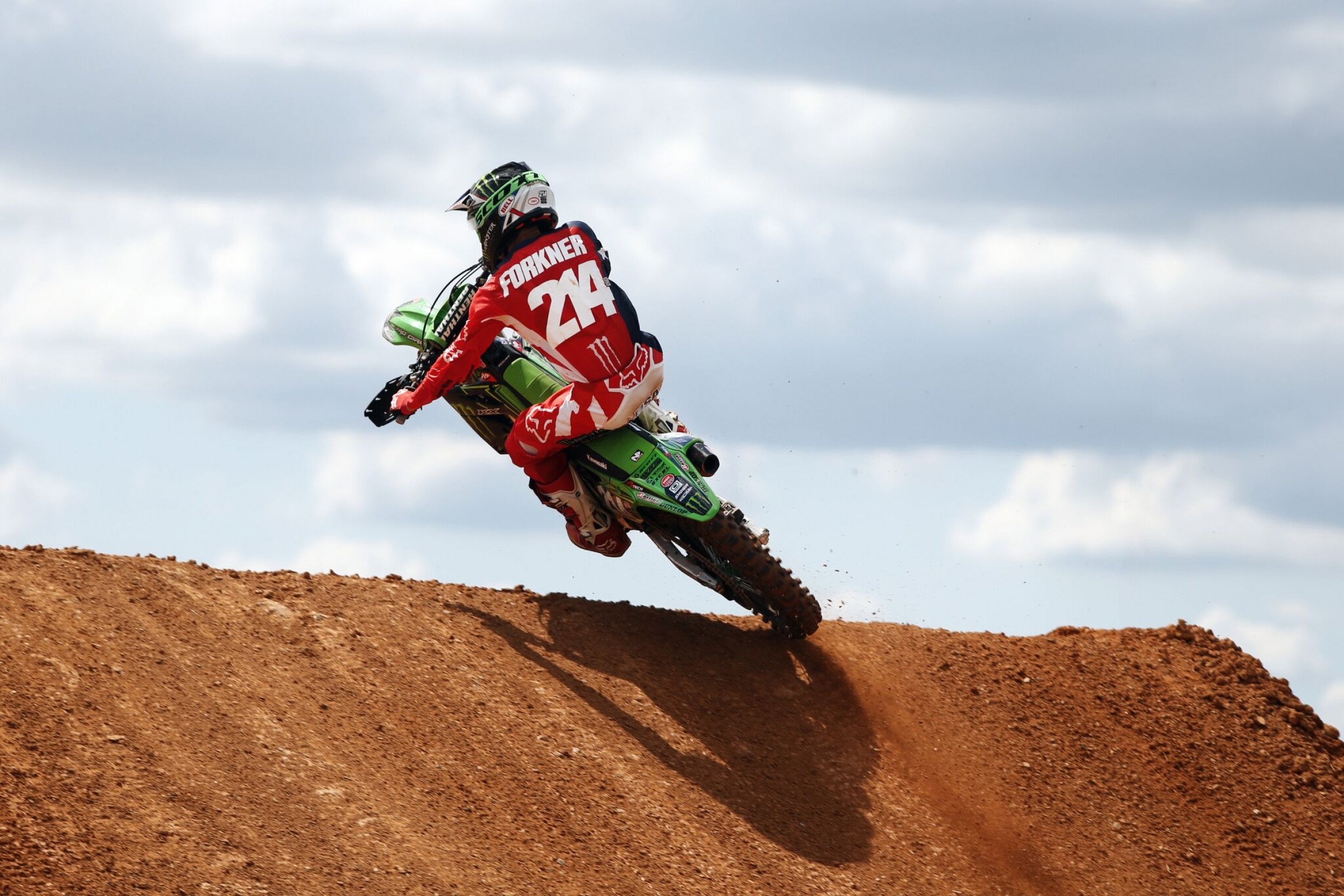 In arguably one of the most recognisable motorsport sites in the United States a Slovenian was proclaimed 2016 MXGP World Champion. Honda Gariboldi’s Tim Gajser closed out a remarkable debut in the premier class to become the first back-to-back title winner in different categories in over twenty years. The Charlotte Motor Speedway and the bowl setting of The Dirt Track housed a fast and spectacular course that was also the setting for Red Bull KTM’s Jeffrey Herlings to finally lift a third MX2 crown thanks to a 1-3 posting. Champions were celebrated on a warm North Carolina evening but the Grand Prix was a showcase for the capabilities of Monster Energy Kawasaki’s Eli Tomac (1-1) and Yamalube/Star Racing Yamaha’s Cooper Webb, who closed off a triumphant 250 chapter of his career with an entertaining success in front of a noisy and appreciative home crowd.

Gajser and Herlings and their respective brands and team staff will remember Charlotte for a long time and the impact of this event also left a sizeable dent in the 2016 story and in recent times of Grand Prix that has seen various flavours of countries, territories and circuits—from South America to South Asia—surface since the start of the century. The seventeenth round of eighteen benefitted from the addition of high profile AMA riders like Tomac, Justin Barcia, Phil Nicoletti, Austin Forkner, Adam Cianciarulo and Webb that added richness to the entry list and at least ensured native inquisitiveness.

The Grand Prix of Americas was a meeting of minds: Youthstream eager to expand the international boundaries of the series (and further mine the small American curiosity with MXGP that started to bloom with Ryan Villopoto’s brief sojourn at the beginning of 2015 and CBS TV coverage) and Charlotte Motor Speedway’s desire to bring motocross into their vast facility and expand a catalogue of events homed around NASCAR and NHRA drag racing. The fixture got off to a damp start as the far reaches of Hurricane Hermine stretched up and across the state and the intensity of the rain across the purpose-built and impressive circuit caused a washout on Friday. The 14,000 seat grandstand was a large grey shadow as measures were taken to preserve the track and the site was deserted well into the evening when the weather improved and the circuit crew began work in the middle of the morning.

The terrain was more than salvaged. Fast, wide, relentless and eventually dry to the point of dusty, Saturday evening saw a remarkable turnaround. It was on this stage that the MX2 class put up the better show. Herlings, Webb and Forkner were the standout trio and held the upper hand over riders like Rockstar Energy Husqvarna’s Thomas Covington (a very solid fourth) and Suzuki’s Jeremy Seewer. Forkner set the early pace in both motos as his pursuers settled into a rhythm and then slowly pulled the teenager back into reach. It was interesting to hear Webb and Herlings compare riding styles after the Grand Prix; the Dutchman full of admiration over the fitness and attacking approach of the Americans from the gatedrop while Webb insisted that he learned from Herlings’ more considered build-up and applied it in the second race. Forkner lost the front end of his Monster Energ/Pro Circuit Kawasaki after leading almost half of the first moto and the sight of his companions, Webb and Herlings, whistling past and drag-racing (how appropriate) side-by-side around the fantastically full-gas dirt-track turn stirred emotions and the crowd’s interest. Herlings pounded out two bon a fide laps after taking control at that point and went on to a third world title confirmation. Webb followed and studied. It looked like the AMA Champion had messed up his chances with a poor launch in the second outing but he bided his time to come through and pass both Herlings and Forkner and made time on the Charlotte surface where a great many were striving (and failing) to do the same. Webb drew cheers from the crowd the volume of which would probably give the throng across the road in the NASCAR stadium a good run for their money. Herlings attacked Forkner in one last ‘hoorah’ on the last lap to try and grab second spot, but the Ironman National winner was resilient.

There were a few rough edges at Charlotte, which were to be expected of a rookie attempt. Some of the riders felt the track was a little fast and would have benefitted from being more technical (although typically one athlete thought it needed more flowing corners while another advocated more tighter and slower turns). The biggest issue seems to be over timing; with the first MXGP moto occurring at sunset and hindering vision while the second motos ran under the lights—and that lighting system needs a boost for 2017 for more brightness and better illumination of the ruts and rougher parts (the same observation was made at the inauguration of Losail in Qatar and numerous revisions were made for the second edition of the Grand Prix in 2014).

MXGP was a clear-cut contest. Tomac faced little in the way of a genuine threat. He checked out to win the first moto by over twenty seconds (in spite of a slip) and once Gajser had made the same faux pas while ahead of the closing ‘3’ in the second moto then Eli had another straight run. Monster Energy Yamaha’s Jeremy Van Horebeek profited from effective starts (something that has been a weakness this season) to earn his second podium of the year. Full credit to Red Bull KTM’s Glenn Coldenhoff who just missed out on the box for a second time in a week; the Dutchman has made fantastic progress in the latter stages of the campaign in his second MXGP year and first in orange. Teammate and Gajser’s sole threat for the crown (Tony Cairoli) was nullified by a virus that left the Sicilian down in fourteenth overall.

After a fairly static first moto there was a wonderful scrap for fifth position in the second race between Van Horebeek, Monster Energy Kawasaki’s Clement Desalle (winner of the Dutch GP six days earlier) and Romain Febvre; at times the trio could not have been closer and Van Horbeek successfully deflected the pressure. Febvre was sixth overall after having fallen in the first moto. HRC’s Evgeny Bobryshev was also pushing in fourth place on what was the first official airing of Honda’s brand new CRF450RW outside of Japan. Barcia suffered a terrible start in the second moto and eventually withdrew. Red Bull KTM’s Dean Wilson lost the front end and crashed in the first moto and new factory Suzuki recruit for 2017 (Arminas Jasikonis) twisted his right ankle and couldn't finish either moto.

The first of two flavours of Americana has been sampled by MXGP and more familiar turf awaits next with Glen Helen set to close the series for the second year in a row next Sunday.