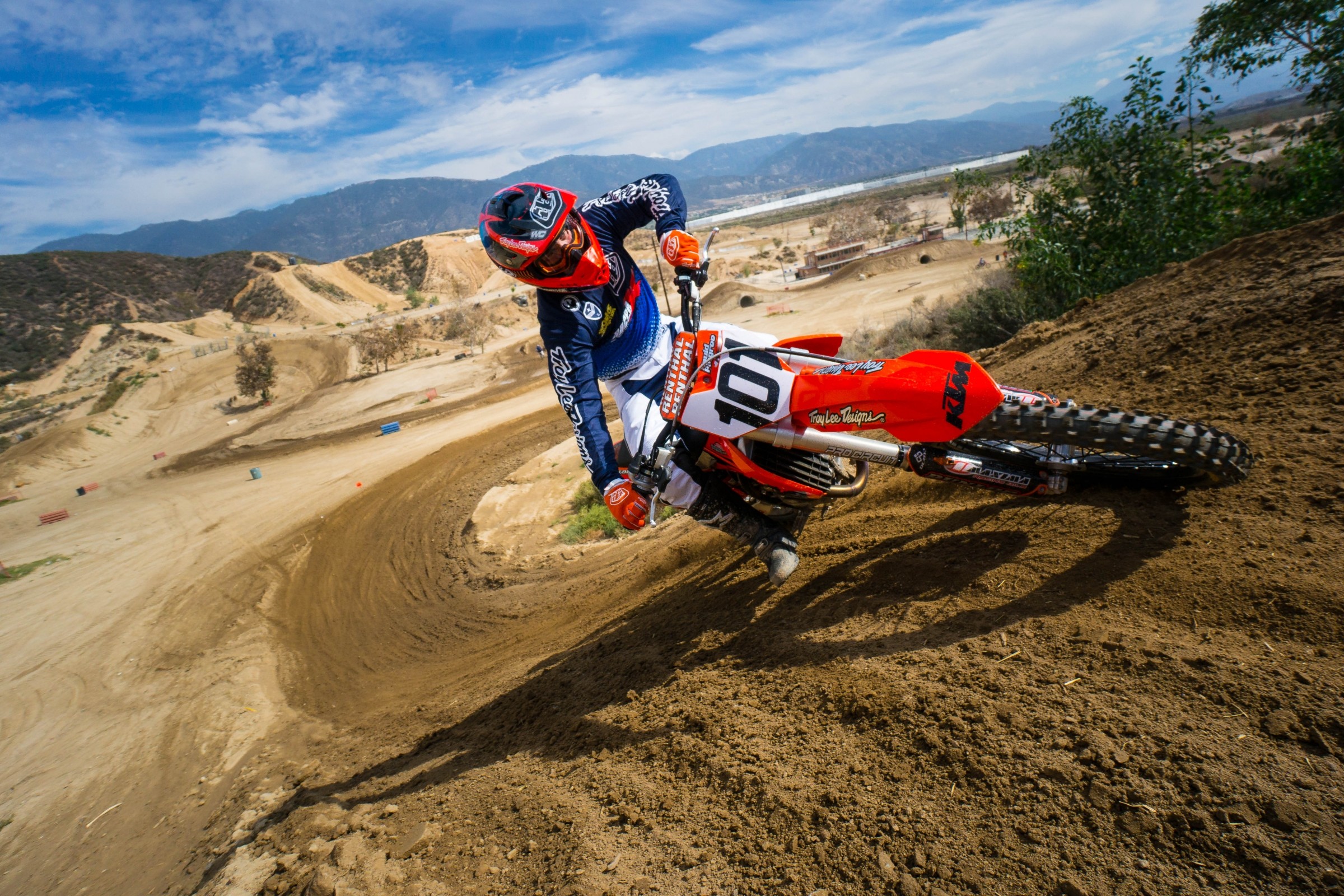 Regards from Brazil. As a big fan of SX, I try to attend the races every Saturday night (you can't imagine how hard we try to wait until 3am to watch the main event live because of the GMT, using a bad internet connection). But my question is: when a rider like KR94 or ET3 changes the team, were they able to ride the new bike before they take the decision? I believe it might be prohibited by contract, right? Or the decision is taken because the rider just imagines it would be better, sponsors, money...

I just ask, because for some riders (not talking about ET or KR), it seems to be a bad move. We've seen guys blaming the bike to justify a bad season.

Thanks for reading
Eduardo Duboy

I commend you on your commitment to watching the races. If my internet buffers more than once while watching I pick up my computer, smash it in the driveway and then run back and forth over it with my truck while screaming obscenities at my internet provider. First world problems, I guess. Switching teams is a difficult transition. Most of the time when a rider changes teams it’s because either he or the team isn’t happy. Eli was having handling issues early on with his Honda and it led to a contract with Kawasaki. Ironically, he found a good setup and posted five of the most impressive outdoor motos I’ve ever seen before hurting himself. Likewise, Roczen complained right up until the last four or five rounds of supercross that he wasn’t happy with his bike and it led to a Honda contract. Once again, after the ink dried, Ken finds the magic setup and he is on a roll right now with a big points lead in the series.

Do they ride the bikes before they sign the deal? Yeah, they do. Most of these guys can set something up at their private compounds or a private track and ride the team’s factory bike. Obviously that is kept under wraps but when it comes to making a big career decision they try to do their due diligence. It will be interesting to see if the KR to Honda thing pans out for him and if Eli can find the magic setting on his Kawasaki. Stay tuned.

I love your column and your insights. I was reading Justin Barcia’s interview, which was straight forward and no BS, and he said something that got me thinking. He said he “should be getting paid half as much as he is getting because of his results." My question is then why is James Stewart getting paid anything? He should repay Suzuki for these last 2 years. He was suspended and I thought he would come back in incredible shape and kick tail… but, no. He is fat and out of shape. He had no intention of coming back strong. One jacked up excuse after another. I would be ashamed to get my paycheck. Why doesn't he retire? He should have 2 years ago

James still gets a paycheck because on any given weekend he can show up and set the fastest lap time in qualifying. He still gets a check because his line of fans is as long as any other rider on the circuit. While his results and issues over the last few seasons haven’t been good, the races are more exciting with him lining up. I think he should consider retiring as well, but it has more to do with his number of concussions than crapping all over his results. I’m excited to see how he does this weekend, even though he’s given me no reason to think he could run near the front in the past couple years. That just proves why the races are better with him there.

In response to your comment to Hummer in the last feature… “We already have a drunk-driving epidemic and now these tree-hugging, left-wing states want a bunch of Cheetos munching stoners to hit the road higher than a giraffe’s ass?”

Seriously? Why are you tearing into entire states for passing marijuana laws?  I’m a republican that sees the law from a different perspective than you though I won’t try to pass that understanding onto a mind as brilliant as yours.  Please re-consider your rant as it is highly incorrect of the many millions of good people you just categorized.  Your comment is on par with the ugly comments being thrown around social media at the moment by certain groups categorizing the millions of good men and women in uniform. While stoners don’t command the respect our police community does, blatantly negative comments about anybody need to go.  Please start with yours since you are a man in uniform.

What part of column last week was negative? The part about driving drunk and high being bad? The part about stoners eating Cheetos? The tree-hugging part? Let me recap for you since it sounds like you might have been stoned last Friday when you sent me this letter: I don’t think it’s a good idea for anybody who is under the influence of drugs or alcohol to be behind the wheel of any motorized vehicle. Ever. Period. Being a “man in uniform,” and having been first on-scene to traffic collisions where innocent families were killed by drunk drivers will give you defined convictions about driving under the influence.

Unlike most people these days, I’m not afraid of saying something that hurts your feelings or isn’t politically correct; we’ve gone completely off the rails with political correctness in this country. I’m not going to sit around in your drum circle and tell you that I think legalizing weed is a good idea just so we can all get along. And if the folks in Colorado and Oregon get upset with me, that’s okay; it’s alright for them to get their feelings hurt once in a while. Besides, I’m pretty sure they have a solid coping mechanism.

Lastly, putting drug users and police officers in the same category is just dumb. I really can’t believe you did that and then actually hit send. Happy smoking, Cheech.