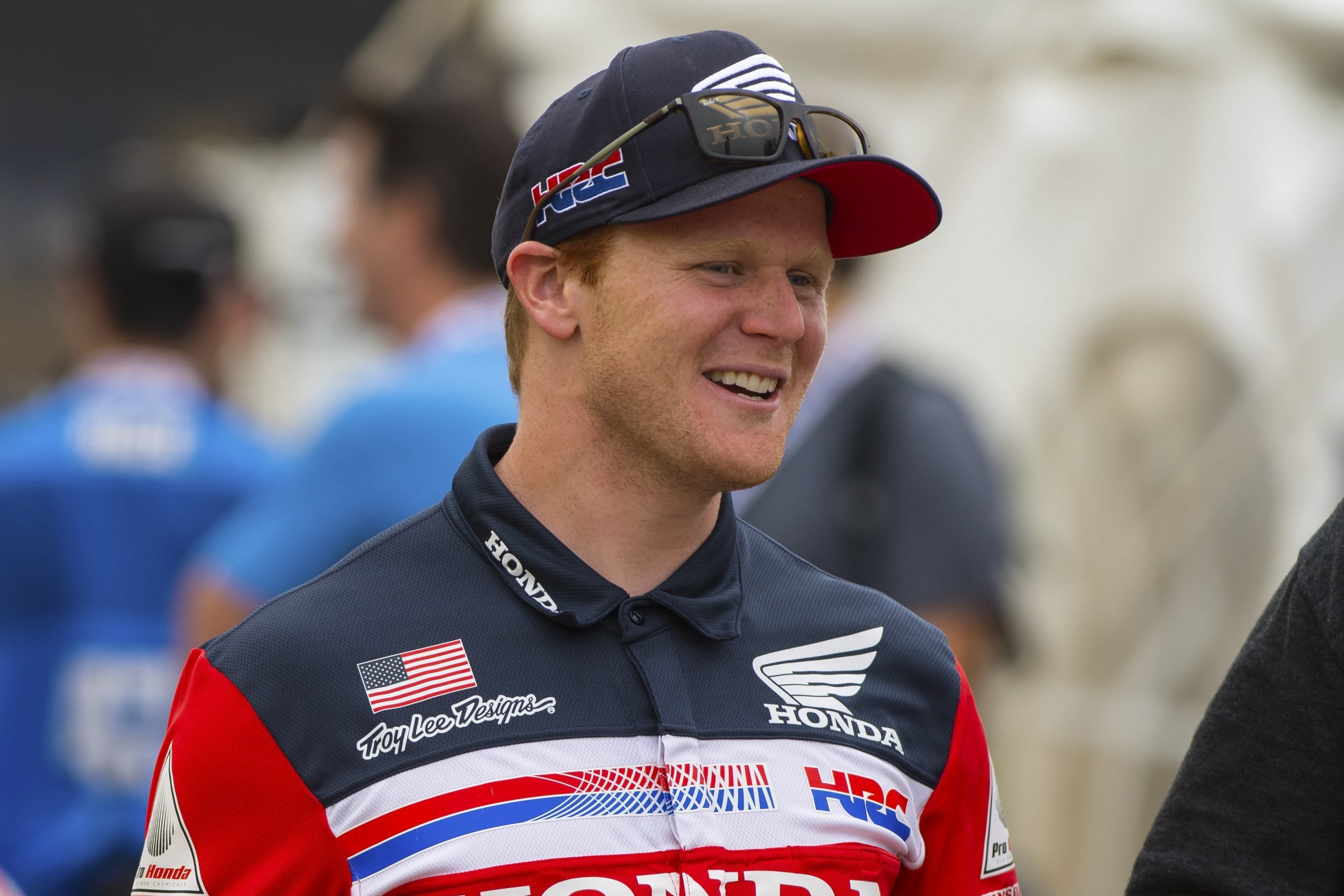 Everyone loves a proverbial clash of the titans, and that’s exactly what the fans got at Southwick when Eli Tomac and Ken Roczen scrapped for the overall like two crazed junkyard dogs fighting over a bloody ribeye. It was superb, and in the end Tomac left satisfied, while Roczen no doubt felt hungrier than ever (although his 47-point lead probably felt just fine). And with Lucas Oil Pro Motocross now headed to Spring Creek, the timing couldn’t be better for another outright brawl. Some of the most epic Tomac/Roczen battles in history have happened here, making it the perfect location for the battle to reach a fevered pitch. –Aaron Hansel

After crashing at home and injuring his neck (a bulging disc, to be exact), Trey Canard will return to action this weekend at Spring Creek. Predicting results is tricky, though. He hasn’t raced since Thunder Valley, but then again, Canard is one of those guys who seem to be able to jump right back into racing without much drama. He’s fast at Spring Creek too. Remember that battle he had with James Stewart a few years ago? We’ll see if he finds the flow this Saturday. -Hansel

By now you all know Spring Creek is owned by the Martins—it gets talked about every year when the Spring Creek National rolls around. But with Alex Martin riding the best he’s ever ridden in his career, it’s more relevant now than ever. The chances of he and his brother Jeremy taking the top two spots at their home track have never been greater! Will two of the fastest brothers in racing get it done, or will another competitor spoil the family party? –Hansel

The Martins at Home

Jeremy, the younger of the two Martins, has been the stronger of the two over the years, finishing no worse than fourth overall. But, look at for Alex this weekend, who is having a career year.

For Jeremy Martin and Joey Savatgy, who at this point are the only two riders who still pose a remote threat to Cooper Webb’s bid for a 250 National Championship. With Webb leading Savatgy by 37 points (Martin by 38) with only five rounds to go, there’s simply no longer any room for error. If they want to keep their championship hopes alive, both have to start finishing ahead of Webb, beginning this weekend. –Hansel

Talking Tristan Charboneau here, who started his rookie season out with a bang this year when he took sixth in the very first moto of his professional career. Unfortunately he then broke his collarbone at Glen Helen, which has kept him out of the action since. The good news is he’s finally ready to race again and will be lining up this weekend at Spring Creek. It’s always possible he’ll have another fantastic moto, but expect this weekend to be more about getting back into the racing swing than trying to make the highlight reel. -Hansel

In addition to Charboneau and Canard, Dean Wilson is also coming off the injured list this weekend at Spring Creek after missing all but two rounds of Monster Energy Supercross and the first seven races of Lucas Oil Pro Motocross with a torn ACL and damaged meniscus. After missing so much racing you can’t expect the 2011 250 National Champ to go out and crush Spring Creek, so, like Charboneau, expect Wilson to use the weekend as an opportunity to ease back into racing. -Hansel

Yoshimura Suzuki’s James Stewart has been out of racing action since sustaining a shoulder injury in the opening moto of the season at Hangtown (Stewart did attempt to ride practice at Glen Helen but did not race the motos), and has been absent the last few weeks as he and his wife awaited the arrival of their first child, Tabiahs L. Stewart, who was born last Saturday. In a season that’s been filled with more bizarre crashes than completed laps, Stewart’s goal has to be to complete to solid motos—no matter the results. Hopefully we’ll see a closer version of the 2014 Stew, than the 2016 one. –Chase Stallo

Don’t look now, but Cooper Webb has ripped off four moto wins over the last six and has finished no worse than second over the last three rounds. Oh, by the way, he’s built 37-point lead over Joey Savatgy in the process. Webb showed the complete package at Southwick last Saturday—a brilliant come-from-behind performance for second in the first moto, coupled with a wire-to-wire win in moto two—en route to a third straight overall. “We’re not behind; we’re in front,” he said in the post-race press conference. “So for me that’s a refresher. In supercross I’ve been able to run the red plate. To me it’s always nice because you do have, whether it’s one point or not, you still have the advantage. So I feel comfortable. Plus it looks really good.” Knowing Webb, he would love nothing more than a repeat performance from last year when he went 1-2 on the Martins home soil to claim the overall. –Stallo

Understandably, the talk around the locals has centered on the Martin brothers. But according to the pre-entry list, there are 18 riders between the two classes that at one point called Minnesota home. And that’s not including recent ESPY winner Ryan Dungey, who’s still out with injury. There’s no other track like Southwick on the circuit that favors the locals, but Minnesota will certainly be well represented this weekend. –Stallo

The rookie has certainly found his footing in a tough 450 class over the last two rounds. Currently riding a three-moto top ten streak, the BTOSports.com-WPS-KTM rider has moved into fourteenth in points, just two behind veteran teammate Andrew Short for twelfth. “Yeah, it’s crazy to think about how fast everything has happened, but I couldn’t be happier,” he told us after RedBud. “I went to the Robbie Reynard Training Complex for my last two years of amateurs, and I think I just got a whole lot of more commitment to my program, my eating and working out and everything. Just started getting faster and riding with faster guys.” Can Bloss continue his hot streak this weekend? -Stallo