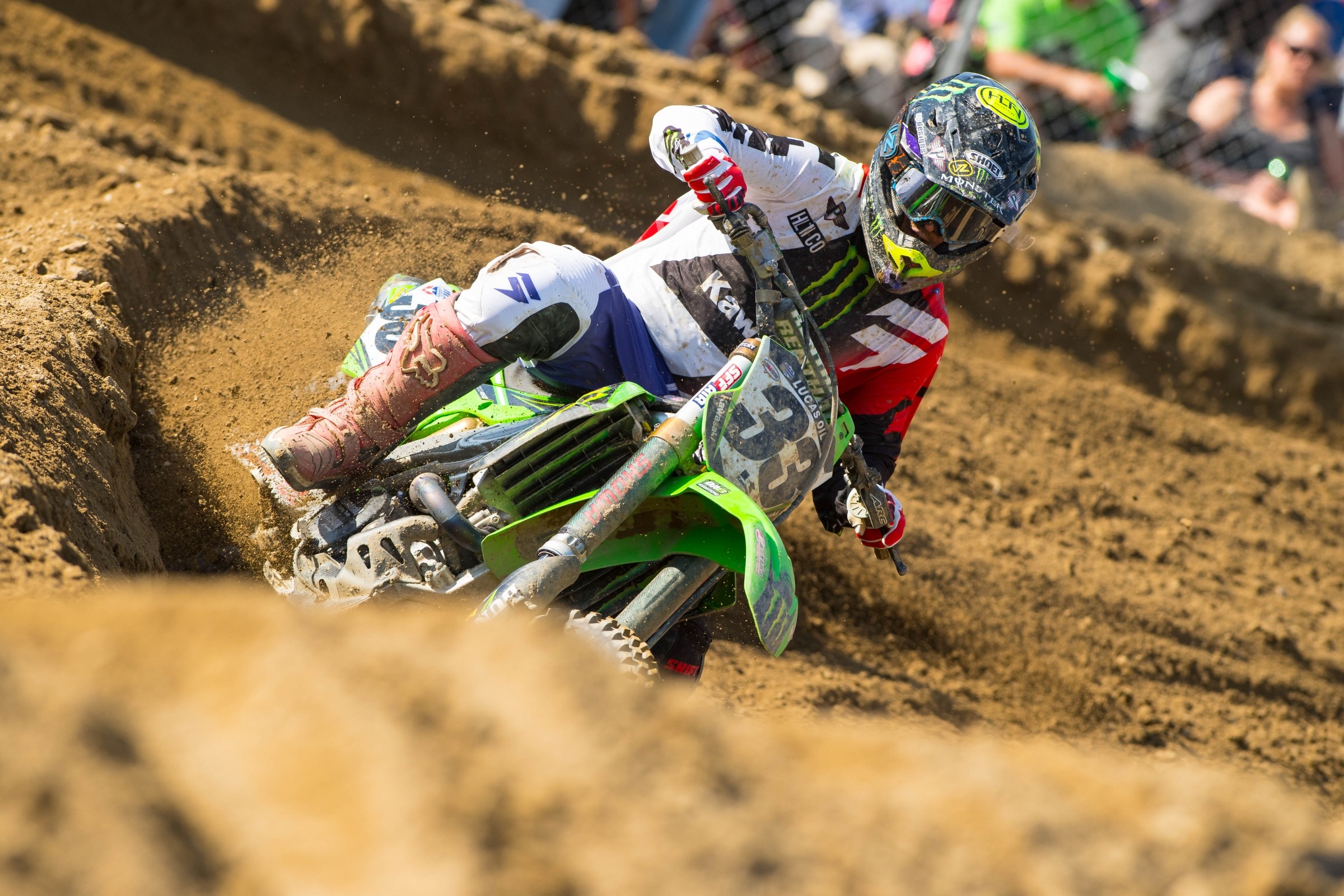 “I feel great,” said Josh Grant after the Thunder Valley National. “Obviously I had some time off after finishing the GP last year. I didn’t ride for a good three to four months, until Daytona. That couple weeks before I got to ride a little bit and it kind of really gave me a chance to heal my body a little bit and my mind. I just wanted to give it another go. So now I feel fresh. I love riding. I want to be back out here. It just brings a whole new intense feeling that makes me go out to the track and just want to crush it.”

As a fill-in for Monster Energy Kawasaki, Josh Grant is enjoying a renaissance. While known for flashes of brilliance but also runs of inconsistency, this season he’s been solid, the perfect makeup for a fill-in rider on a team. He went 8-8-6-6 in the first four motos of the year. At Colorado, he was a touch better, even flirting with a podium briefly. He ended up going 4-7 for sixth overall, and he also sits sixth in the standings, with 88 points. In 2014, he started the season with one of his usual flashes, holeshotting and winning the first moto of the season at Glen Helen. But by the third round that year, he had just 79 points, and sat eighth.

“Yeah, for sure,” he said. “The GP was obviously my last race. Then with everybody kind of landing on the teams it was all sorted out already. I didn’t really have a deal. So my wife and I were talking, we were like, ‘Yeah, this could be it. So what’s next?’ So I sat at home just trying to figure out what I was going to do moving forward. That’s when the whole fishing trip in Florida and going to Daytona and all those things came about. My buddy was like, ‘I’m only going to take you out on my boat in Florida if you come out and do Daytona.’ I was like, ‘All right, let’s go do it for fun.’ That’s how buying the bikes started and getting ready for two weeks and then wham, sixth at Daytona. I was like, ‘All right, I’m not done.’”

There would seem to be pressure on Grant at Daytona because it was a last chance to prove his worth. But at that point he was so far down the road the he was pretty much expecting it all to be over. He didn’t do it to impress, he did it to have fun and ignore any sort of pressure or expectations.

“Yeah, that’s why it was so fun,” he says. “I did it on my own. I was out of my own van. I was on my own bikes. We had our own pit. Everything was great. It was a good feeling to actually be there because you wanted to be there and not under the obligation where you had to be there. It’s just bringing a whole different aspect to it again.”

Wil Hahn was injured at the Atlanta supercross, and a few weeks after Daytona, Monster Energy Kawasaki got in touch with Grant. He had already ridden for the team at the end of the year last year, also as a fill-in for Hahn, and after his own ride at Chad Reed’s TwoTwo Motorsports outfit came to an end. While Hahn and Eli Tomac were under contract to the team for 2016, Grant made sure to keep the relationship going.

“Obviously I’m filling in for Wil because he’s hurt but unfortunately that’s kind of the way the cards fell last year,” he says. “I wanted to be on the team as the full-time guy this year, but it’s just the way it worked out. They called me up and here we are—they’re giving me their full support.”

Grant’s season started late. It wasn’t until March that he got the call from Kawasaki, so he was several months behind his peers in training, especially since prior to that, he wasn’t even expecting to be a racer at all anymore.

“I wasn’t going to do it [training] for nothing,” he says. “Spend all my days training and not even have a chance to even show it. So I didn’t really start until I got this ride. Now each weekend it’s confidence building. It’s fitness building. I hadn’t had a chance to really work out. It was hard, but I think with how many races have gone on it’s getting a lot better. Supercross I wanted to get through it, and that kind of helped me build a base into outdoors a little bit. Right now it’s kind of the same. Every 30-minute moto I throw in is just helping my base get a little bit better. So when I come to the weekends I’m not feeling as bad as I was.”

These first three tracks have always been good ones for Grant, but as he builds his strength again, he might be able to get even further to the front. Regardless of how this season ends, though, it’s already rejuvenated him to keep going much further. Josh will turn 30 on June 20, but now he doesn’t see an end anytime soon.

“I feel like I’ve got a lot more left now, so I’m going to do this as long as I can,” says Grant. “I’d like to be like John Dowd and be like 45 and then going to Glen Helen and getting on the podium. That’d be sick. One time a year, show up, get my points, keep the number 33, say peace, and I’m out.”