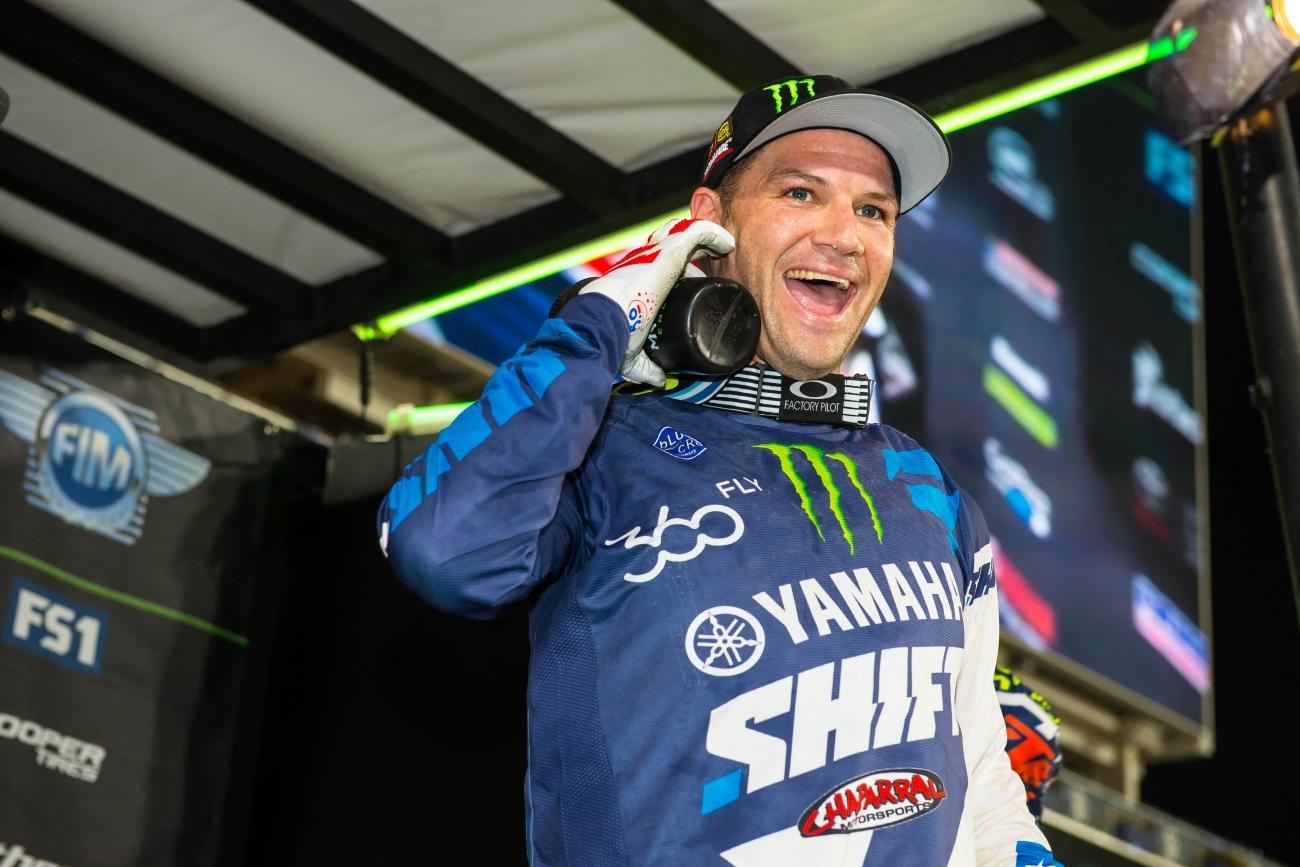 Two races into the new Monster Energy/360fly/Chaparral Yamaha factory racing team with Chad Reed and the bike is already on the podium. Reed hung with defending Monster Energy Supercross Champion Ryan Dungey for all twenty laps in San Diego, proving that he’s a contender again in his fourteenth season (!) in the 450SX class. We talked to him in the pits after the race.

Racer X: Another year, another brand change, another “could this be the end?” Nope! Chad Reed’s on the podium again, running Dungey’s pace. This is like a renaissance for like the 100th time.
Chad Reed: Definitely when you put it like that, I hadn’t thought of it that way but I guess I have had my ups and downs. Tonight we spent twenty-six laps behind the champ and learned a lot. Gained a little, lost a little. We made some good changes this week. My focus was starts and I got the $1500. Maybe I should give that to [Michael] Byrner but we’ll see.

Last week it was sixth but the riding was good. First race on this new team and all that, and I heard you weren’t even making a ton of changes to the bike during the day. It’s not like just tonight was good; the whole time it’s been pretty solid.
Yeah, we left last weekend thinking we left a little on the table. On the first start, before the restart, I was fourth and felt like I had a good rhythm, was moving forward, and was following [Ryan] Dungey again. I think last week the track was probably a little bit more my kind of track—rutty, a little bit more technical. Tonight truthfully wasn’t my favorite track. Fast, you had to race every inch of the track to gain a tenth here, a tenth there. We just kind of yo-yo’ed there with Dungey. Left last weekend just content but not pumped. So we worked on our weaknesses this week and we got better but still a little work to do.

So you get on the podium. San Diego’s always good for you. The team is on the box. But is it still just second? Are you happy with second because it’s a podium or are you like, no, I want to win?
Of course you want to win but as you get older you appreciate these a little more. Down there after the race [Race Day Live host] Jim Holley made me aware of my last podium was my win in Atlanta 1 last year. So to think that I wasn’t on the podium for that long, just even seeing my wife down there and how happy it is. We’re a family, and together we have the most podiums of all time and we’re used to being on the podium. We don’t come play just to make up the numbers. We want to be on the podium, we want to win races. So I’m content and I’m happy, grateful. But you always want to win. But like I said, you put a lot of tonight in the memory bank. I know where I’m strong and I know where I’m weak. The challenging thing is just trying to implement that into your riding and into your bike setup and then working on another good start and a solid 20 laps.

There had to be some stressful moments with the whole process building this team. Is this going to happen? Is it not going to happen? How good does it feel like it happened and it’s working? This new Yamaha team is not just here, but it’s effective. It’s fast, it’s good.
It is. The feeling around is mutual. Everybody’s happy. The Thursday morning of press day last week I got to go to Yamaha and walk around the front of the building which is where the guys that sign paychecks are. A lot of the people that were there many years ago are all still there. It was a lot of fun to see some familiar faces and more than anything just the feeling that I had. They were grateful to have me back and I’m thankful for the opportunity. But I’m your typical greedy athlete. I want the fairytale ending. I do. I want to win races and I want to win the damn title. I want to work hard. I’m ready to work hard and do whatever it takes. I feel like I’m in a good place, I’m in good shape and the bike’s good so it’s really just all on me.