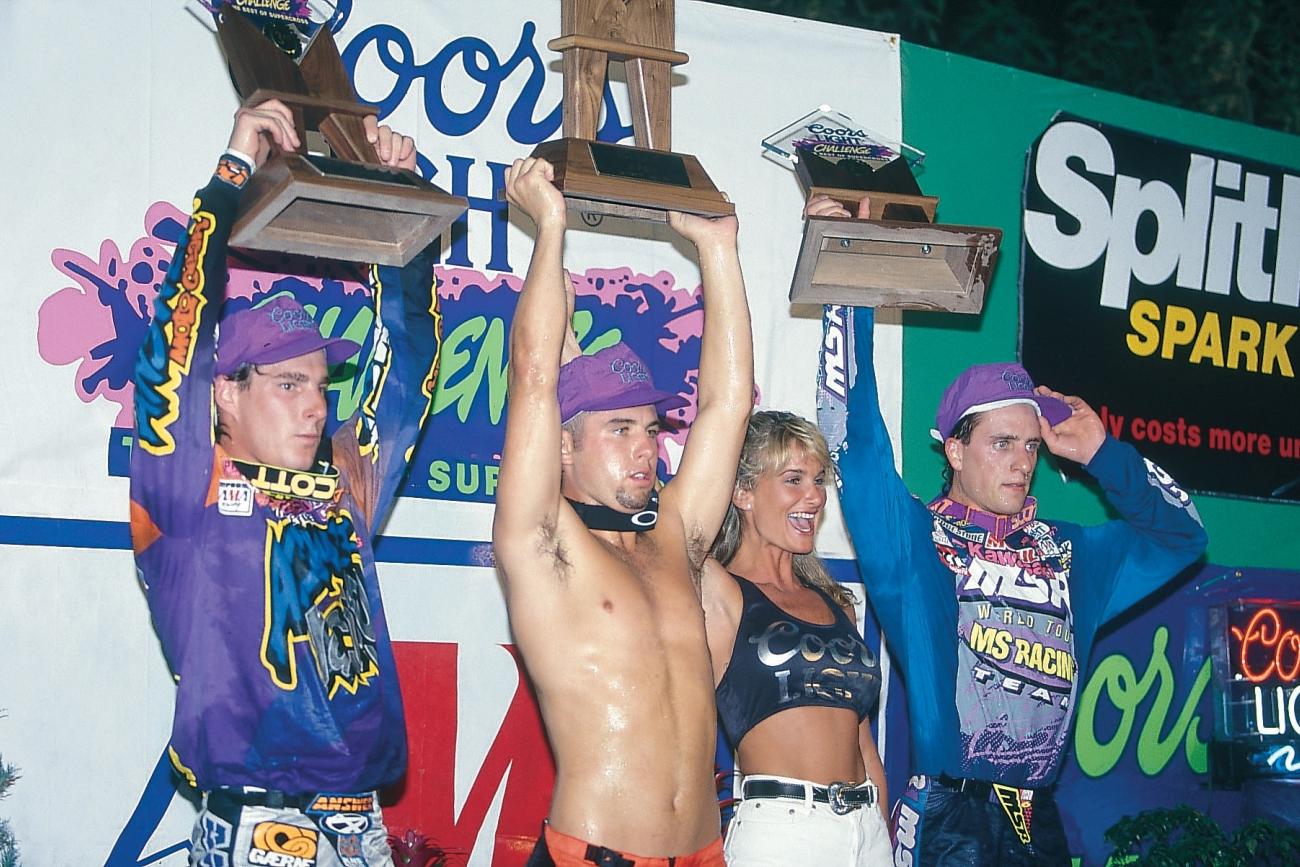 We say we’re here for the racing, but if something outrageous is said on the podium, it results in a lot more talk than anything within the 20 laps or 30 plus two.

So this week we’ve got to give it up to our team, thank the man upstairs for keeping us safe, and talk about all the hard work we’ve been putting in. I mean, everyone has just been working so hard! This week, we’re talking podium speeches. Dos and don’ts. We just can’t thank everyone…

It’s nearly impossible to create a comprehensive list of every great podium moment over the last 40 years, so let’s call this volume one. If you’ve got some memories to share, do it in the comments section below (especially if you witnessed national podiums in the 1980s or 1990s. Apparently, they were epic).

Okay, it’s boring but the sponsorship list would pale in comparison to the list of sponsorship fines if dudes didn’t say these names. That’s the world we live in. You’ve truly reached next level when the pit board literally has the words “and anyone else I forgot” at the end. This means you had to be reminded that you forgot them! Yes, we’ve seen this.

This is 1994 and supercross hadn’t quite reached today’s level of professionalism. It was darned hot at the Las Vegas Supercross so Jeremy McGrath just decided to go bare chested. No jersey, no sponsor logos, just Oakley goggs and some well placed hair. You can’t get away with this stuff today.

The 1996 250 National MX Championship was a good one. McGrath dominated early but then hurt his foot, Jeff Emig caught fire at mid-season like usual, and they ended up nearly tied going into the finale at Steel City. McGrath, a year before, had already said Steel City was his favorite track. On the ESPN broadcast of the next-to-last round from Broome-Tioga, pit reporter Davey Coombs (yes, that Davey Coombs) asked Emig about his chances at MC’s favorite track. "Well, we'll see whose favorite track it is when we’re holding the number one plate,” said Emig. Emig went 1-1 the next weekend to win the title.

Thanks to Cooper Webb, Tyler Bowers and others for keeping this tradition going.

This is Ricky Johnson’s famous Rodil Cup rant. The promoters tried an inverted start where the heat race winners had to start in the back row for the main event, so most of the stars just sandbagged in the heats and faked mechanical problems and injuries before miraculously recovering for the main (while starting up front). RJ, ever the showman, wasn’t pumped on all the acting. We’d like to say his hero rant led to some magic on the track, but unfortunately RJ started in the back and had no chance. The sandbaggers won.

Wait, did that just say do the podium girl? Err, uh, that didn’t come out right. Or maybe it did? Um, just let this old school clip of Jeff Stanton and Jean-Michel Bayle guide you…and then watch Jeff “Chicken” Matiasevich do what he does:

Speaking of, we’re not sure if this Bob “Hurricane” Hannah picture is a do or a don’t:

Seriously, what was going on with these podiums back in the day???

Well, we never really had a problem with this, but Broc Tickle thanked his dog on the podium at Toronto in 2009. Larry Brooks, at the time the team manager for James Stewart with San Manuel Yamaha, thought this was disrespectful to all the people on Broc’s team that worked so hard, and shared his thoughts about this on the Internet. As is the case with all things Internet, it turned into a firestorm. C’mon, Larry, how could you be mad at a face like that?

We could run a whole List about Jason Lawrence podium work. Maybe we should someday? One time he dropped an eff bomb on the Seattle podium. Another time at Seattle, after winning the 2008 Lites SX West Championship, he went off the rails again:

Jason Lawrence - "Who cares about the outdoors?"

Once at Loretta’s, he won the A class and said, “I heard Ryan Villopoto was supposed to be the next big thing, and I never even saw him.” And Ryan Dungey just absorbed heaps of J-Law’s verbal punishment in 2008.

We’d like to show you video of his Jason’s championship acceptance speech from the 2008 Supercross Awards Banquet in Las Vegas, but it doesn’t exist—he ended up partying at the Palms and never showed up!

Grab your rival by the neck

Speaking of Larry Brooks. The 2009 supercross season was completely nut balls, with James Stewart and Chad Reed reaching unheard of levels of heat. In Jacksonville, Florida, they met up eye-to-eye on the podium. What few realized at the time was just before this, Reed had ridden up behind Stewart as James was celebrating the win, and either grabbed him by the shoulder to get his attention (one side of the story) or grabbed him by the throat to choke him (the other side of the story). Here’s the legendary stare down on the box.

We know Ryan Villopoto likes himself some high-speed runs through the desert. He also used to bash around pretty good in a Ford Raptor. One time he was cued up for a plug for the Toyota Tundra (the SX series’ sponsor) and he said, “Buy a Raptor!”

He was singing a different tune in 2014 when his series’ championship paid him with…a brand new Toyota Tundra. This time he said the truck felt cooler than the number-one plate!

One time Nick Wey got stuck in traffic in a LCQ and missed the main. He got to go the podium to accept the old Racer X gas card, which paid $750 to the rider who just missed the main event. Nick said, “I’m going to donate this money to Dirt Wurx so they can buy dirt and actually build some jumps”

Ricky Carmichael once lapped the field at the Millville National. He was aided by a muddy track that trapped a lot of his competitors on a hill.

Anyway, the rain actually started an hour early, at exactly halfway through the second 250 moto. Suzuki’s Broc Hepler was running well, but when the rain started he went to another level, blew past the field and won the moto and overall. On the podium, announcer Rob Buydos said, “Well, Broc, I don’t think anyone expected sunny skies to turn into torrential rain halfway through that moto.” To which Hepler replied: “Well, the guys at Scott goggles did and I was the only one out there with roll offs.”

That’s how you do it!

Mike Alessi did after winning his heat race at Anaheim 1, 2014. Sorry, Mike, we had to.