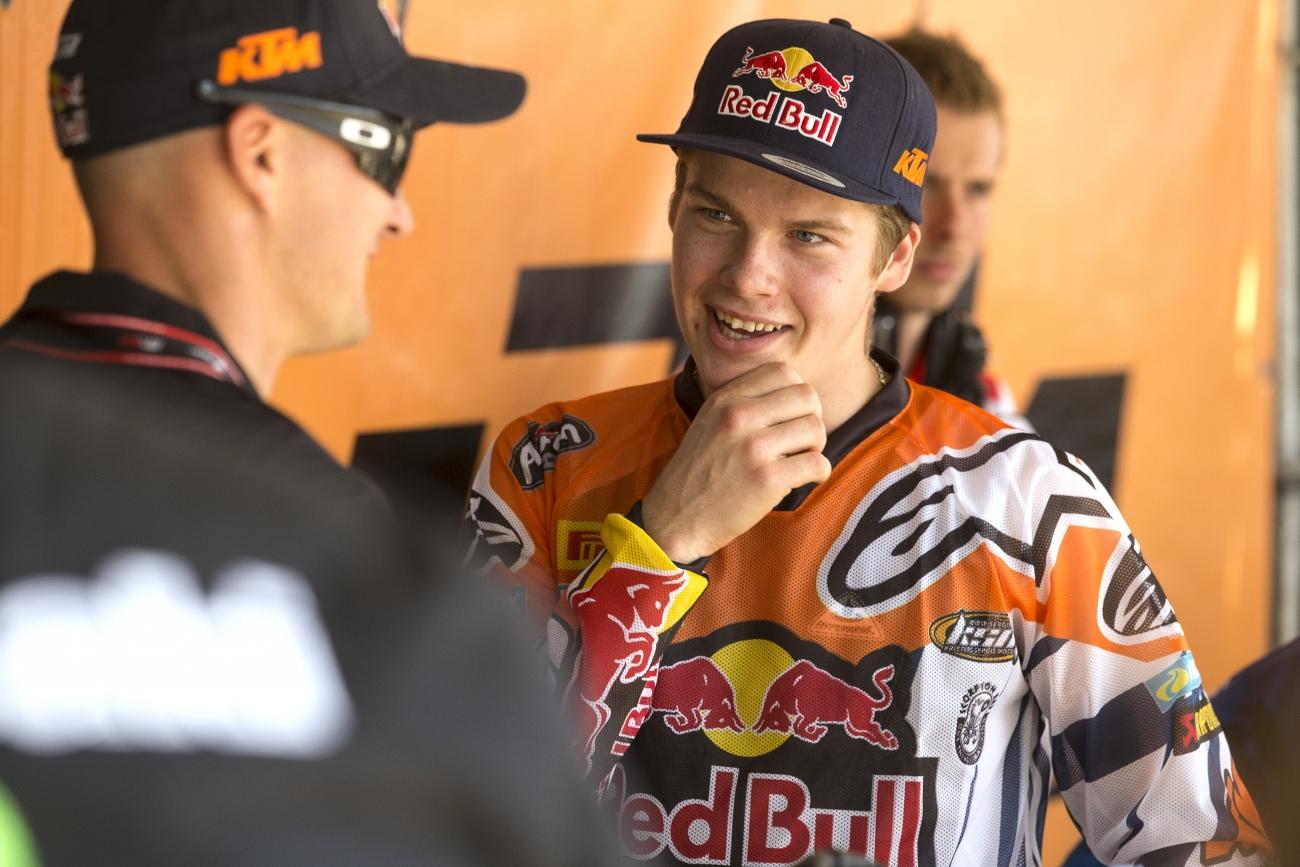 Pauls Jonass’ weekend swung heavily in Mexico, from pole position and a first-moto win with an aggressive and confident approach to almost disaster with two crashes in the second race; one of which was impressively huge and almost catastrophic. Jonass might not be able to keep KTM in the record books (the Austrians have won both FIM Motocross World Championship classes since 2010) due to an 18-point deficit to Gariboldi Honda’s Tim Gajser going to Glen Helen, but in his first full Grand Prix term he has established his credentials and profile beyond all expectation. He has also been extremely lucky to escape without injury in two major get-offs.

We spoke to the 18-year-old Latvian about that sensational accident from which he was still able to pick up and finish the moto in thirteenth.

Racer X: You seemed to come into this weekend ready for action.
Pauls Jonass: After Assen [Grand Prix of the Netherlands two weeks ago] we had a meeting with Stefan [Everts], and we decided that we have nothing to lose. I was not expected to win the championship this year, and if I finish in the top five, then I will already be doing more than my goal, which was top eight at the beginning of the season. I want to prove to people that I can ride fast. In some races this year, I was struggling in the last five to ten minutes of the motos, and I wanted to show I could be strong until the end. I found extra motivation, and after Assen I had two really good weeks of riding. I want to push my limits. I like the track here, but everyone is struggling with the altitude and the bikes. In the first practice session, I wondered what I was riding: was it a 125? I got used to it in the qualification race.

It wasn’t a hassle for you to close the series in this way and with two overseas events?
I really enjoy overseas races. I feel like a tourist and it is really easy! The first three GPs and the overseas were great for me as well and gave me some confidence.

You were 13 points down before the motos and now 18, and it shouldn't have been like that because you were really on it here.
The weekend had been going really good and I felt so fast. The speed was there. I won the qualifying race easily, the first moto easily, and had the holeshot in the second one, but made a really stupid mistake—like in Assen when I also lost the front wheel. I’m really bummed about that. After the crash I got up quickly and came up to two places behind Gajser, and I lost my footing in a rut and made a really bad crash. Luckily, I was okay. I tried to continue but had to make a pit stop because the bike was really bent. We still have two motos to go, and it is only 18 points. It is not over. There are two more checkered flags yet. It will be difficult.

Your speed coming back from last to sixth was pretty amazing, but were you pushing too hard?
I didn't push too hard. I felt good on the track and it was really nice. Maybe I went a little bit over my limit. I rode at 102 percent and that 2 percent caused me to crash. I don't know why I went down on the first turn. S**t happens.

People around the world will look at that clip, and it is shocking and spectacular. What was going through your mind?
It was scary. I had something similar in Sweden, and that time I could not continue the race. When I was in the air I just screamed, “Oh s**t!” The next thing I was on the ground. Very lucky that I am okay. It was really big and I could have broken bones easily.

On the first corner I think someone hit your leg and somebody else ran you over. Hard day.
Yeah, the leg, the back. I felt like everyone hit me. I was lucky also there. Good luck and bad luck today.

Will you be just as attacking next weekend at Glen Helen?
For sure. It will be the same. I have nothing to lose; I can only gain. Eighteen points. Nine to 10 points in each race will be difficult, but we can still do it. I’m really excited to go there. The track looks awesome in the videos. I’m looking forward to riding with the Americans, and it is a shame that the age limit means that Marvin [Musquin] cannot be in MX2.