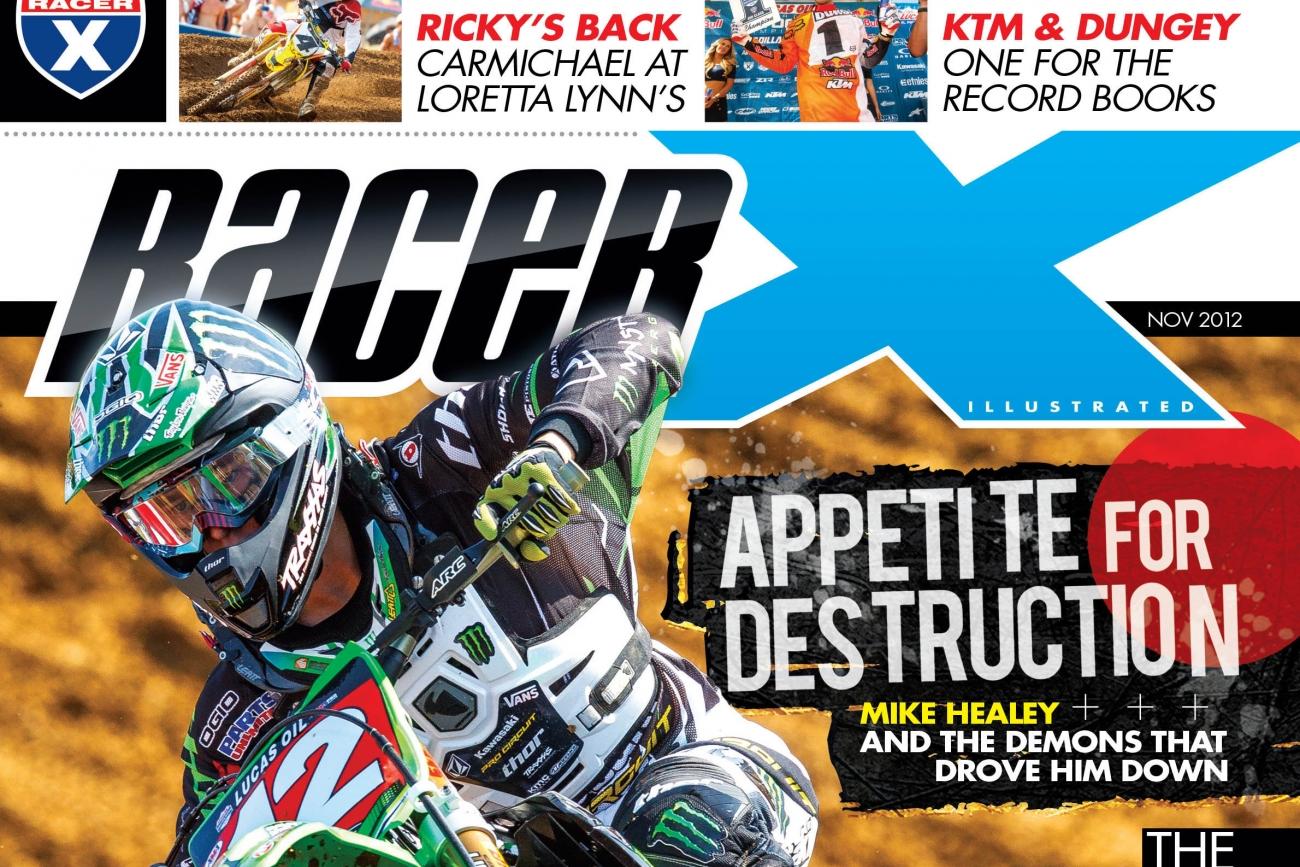 Last week the November 2015 issue of Racer X Illustrated was released with Monster Energy/Pro Circuit Kawasaki’s Joey Savatgy on the cover. Savatgy enjoyed a career year in his first season under Mitch Payton’s watchful eye, finishing third overall in the 250 Class in Lucas Oil Pro Motocross, and grabbing his first career win at the Red Bull Unadilla 250 National in August. With Adam Cianciarulo, Tyler Bowers, and Arnaud Tonus missing all or most of the summer due to injury and illness, Savatgy became the team leader under the Pro Circuit tent beside rookie Chris Alldredge.

“It’s been an up-and-down season for me, so to get a Racer X cover is a great honor,” Savatgy said. “I’ve learned a lot about myself and my team. We’ve experienced some lows, and then to experience what it’s like to win is amazing. I have great people in my corner who believe in me and want to win as bad as I do. Thanks to everyone for this honor—and it’s a cool Cudby shot!”

We agree and you’re welcome @versacesavatgy!

Since Racer X Illustrated became a magazine way back in 1998, eighteen Pro Circuit Kawasaki riders have graced the cover—starting with the GOAT, Ricky Carmichael, who landed on the cover of the fifth issue (Nov/Dec 1998 issue). Savatgy is the first from the Monster Energy/Pro Circuit Kawasaki team to land the cover since Blake Baggett graced the front in the November 2012 issue. (By the way, you can look through every Racer X Illustrated cover here. It’s a cool trip down memory lane.) So for The List this week, we’ve decided to take a look back at all eighteen Pro Circuit riders to make the cover throughout the years.

As we mentioned above, Carmichael was the first Pro Circuit rider to appear on the cover of Racer X Illustrated. The photo is from the 1998 Motocross des Nations where Team USA lost to the Belgium squad Marnicq Bervoets, Stefan Everts, and Joel Smets at Foxhills in Great Britain. Carmichael would exact revenge two years later at Saint-Jean-d’Angely, France, alongside Ryan Hughes and Travis Pastrana. This shot from Foxhills was made by Dangerous Joe Bonnello.

Mike Brown graced the cover nearly three years to the date after Carmichael. After racing in Europe in the 125cc FIM World Motocross Championship in 2000, Brown returned to the States in 2001 and landed a ride with Mitch Payton. Later that summer, he would go on to win the 125cc AMA Motocross title—the first of his career. Now, all these years later, at 43 years of age, Brown is still competing—winning Gold at X Games in Austin this year and battling for a GEICO EnduroCross Championship with Cody Webb and Colton Haaker. Simon Cudby photo from a shoot he did specifically for this front page.

Racer X Illustrated editor-in-chief Davey Coombs had a deal with Georgia’s Matt Walker—win a professional race and we’ll put you on the cover. And that’s what DC did after Walker won his first professional race in Houston in 2002 (125 Class) over Travis Preston and Eric Sorby. Today, Walker owns and operates a successful training academy (MotoX Compound) in his home state of Georgia.

Mike Brown shared the September 2003 cover with Ryan Hughes. The two, along with Grant Langston, dueled for the AMA 125 Motocross title that summer, with Langston topping Hughes in dramatic fashion by just 7 points (the final race didn’t even take place due to a flood in Troy, Ohio). This Simon Cudby photo was shot at Glen Helen early in that series.

Ivan “Hot Sauce” Tedesco was the man to beat in the 125 Class in 2005. Tedesco would win his second straight 125 AMA Supercross West Region title that year, and later in the summer the 125 AMA Motocross championship. Later that year, Tedesco was part of the winning Team USA squad at the Motocross des Nations. Last summer, Tedesco announced his retirement from professional racing and now works with RCH Suzuki. He got some other covers with Yamaha of Troy and Team Honda, but this was his first and only on a PC Kawasaki.

RV’s first cover as a professional came in September 2006. In his rookie year, Villopoto won six overalls en route to his first career professional title over longtime amateur rival Mike Alessi. Simon Cudby made this shot, however, back during the SX tour.

Villopoto won his first career SX Lites title in 2007 before successfully defending his outdoor title later that year. The craziest thing was, he wrapped this SX Lites West Championship up in February! It was becoming obvious to all that RV was going to be the next RC.

Townley won his first and only championship in America—the SX Lites East Region Championship—in 2007 and got on the cover shortly after. Townley is back in the United States, racing the USGP this weekend at Glen Helen in preparation for the Motocross of Nations where he will ride the MXGP Class for his native New Zealand. This is another one from Simon Cudby.

Villopoto announced his arrival on the world stage by dominating the 2007 Motocross of Nations at Budds Creek in Maryland, winning both of his motos on his Monster Energy/Pro Circuit Kawasaki KX250F, something that hadn’t been done before and hasn’t been done since for a rider in that class.

PC teammates Ryan Villopoto and Brett Metcalfe share the August 2008 cover with Yamaha of Troy’s Jason Lawrence and Muscle Milk KTM’s Ryan Sipes. This was RV’s last cover as a Pro Circuit rider, and the only for Metcalfe. J-Law would get a couple of more covers in his short, wild career, and so would Sipes—and if we were more of an off-road magazine, he would be getting one soon for his amazing performance at last week’s International Six Days Enduro, where he became the first American to ever win the whole thing! Cudby shot this photo from the Talladega Turn at Glen Helen. That’s a popular spot.

Jake Weimer snagged his first cover after winning the West Region Lites Supercross Championship over Wil Hahn. But this was actually a long overdue cover, because we had promised Weimer’s dad he would be on the cover after he helped Ryan Dungey and Ivan Tedesco win the 2009 Motocross of Nations in Brescia, Italy, the previous fall. Simon made this shot at one of the Anaheims.

Christophe Pourcel won a second straight East Region Lites Championship in 2010, and coulda, woulda, shoulda won the outdoor championship later that summer, before losing out to Trey Canard after crashing at the finale and breaking his arm. This was the only cover Pourcel got as a Pro Circuit rider, and Steve Cox shot it in practice at the Daytona SX.

Josh Hansen splits the April 2011 cover with then-Lucas Oil/Troy Lee Designs rider Cole Seely. Both Hansen (3) and Seely (2) would win multiple races that year but lose out on the title to another Pro Circuit rider—Broc Tickle—who certainly deserved a cover for that success, but we just didn’t have the right shot, so we waited and got him on there later when he began racing with RCH Racing Suzuki.

The summer of 2011 belonged to Pro Circuit, as teammates Dean Wilson, Tyla Rattray, and Blake Baggett traded wins in the 250 Class in AMA Motocross. Wilson would eventually catch fire down the stretch, winning his first career motocross championship over Rattray and Baggett.

Adam Cianciarulo, who won eleven career titles during his career at Loretta Lynn’s, announced a five-year deal with Monster Energy/Pro Circuit Kawasaki in 2011—at the time, an unheard of deal. Cianciarulo has struggled with injuries since turning pro, but he is still the only amateur to be featured on the cover of Racer X Illustrated. [Edit: Davi Millsaps was featured on the cover of the March 2003 issue, while Mike and Jeff Alessi were featured on the Nov. 2003 cover as amateurs.] What’s cool here is that the photo was shot by our OG editor Chris Hultner, who came out of semi-moto-retirement at Loretta Lynn’s and shot this gem of the kid then known as “AC92.”

Wilson was a favorite to repeat as champion in 2012, but injured his shoulder in Monster Energy Supercross and didn’t make it out of the outdoor opener. He was featured on the cover in March as he and GEICO Honda’s Eli Tomac were engaged in a heated battle for the 250 West Region Championship. Tomac would go on to win the title after Wilson injured his shoulder at the next to last round. Simon Cudby made this shot at the Pro Circuit SX test track up behind the Talladega Turn at GH.

With Wilson out, the door was open for his teammate Blake Baggett. Baggett would win his first professional title in AMA Motocross that season over the GEICO Honda duo of Justin Barcia and Eli Tomac. This Cudby shot came from the first turn at Spring Creek, though not on the first lap of the race!

Savatgy is the latest of a long-line of PC riders to grace the cover of Racer X Illustrated. This shot was made by Cudby at the race Savatgy won, the Red Bull Unadilla National in New York.

And while this wasn’t a front cover shot, it should have been, and it deserves honorable mention here as quite possibly the best photograph to express Pro Circuit’s long and competitive history in SX and MX. It was shot by Simon Cudby on the first lap of the 2007 Freestone National, coming out of the second turn. Villopoto and Ben Townley lead Austin Stroupe (981) and Brett Metcalfe (123) in a single frame—it was not a Photoshopped or otherwise manipulated! But before we could get our hands on it, Dean Jocic and the gang at Renthal saw it and begged Simon to use it for their fall advertising campaign, since all four were not only PC frontrunners, they were using Renthal. And the quote on the bottom from Mitch—“You don’t race to lose.”—is pure Payton!