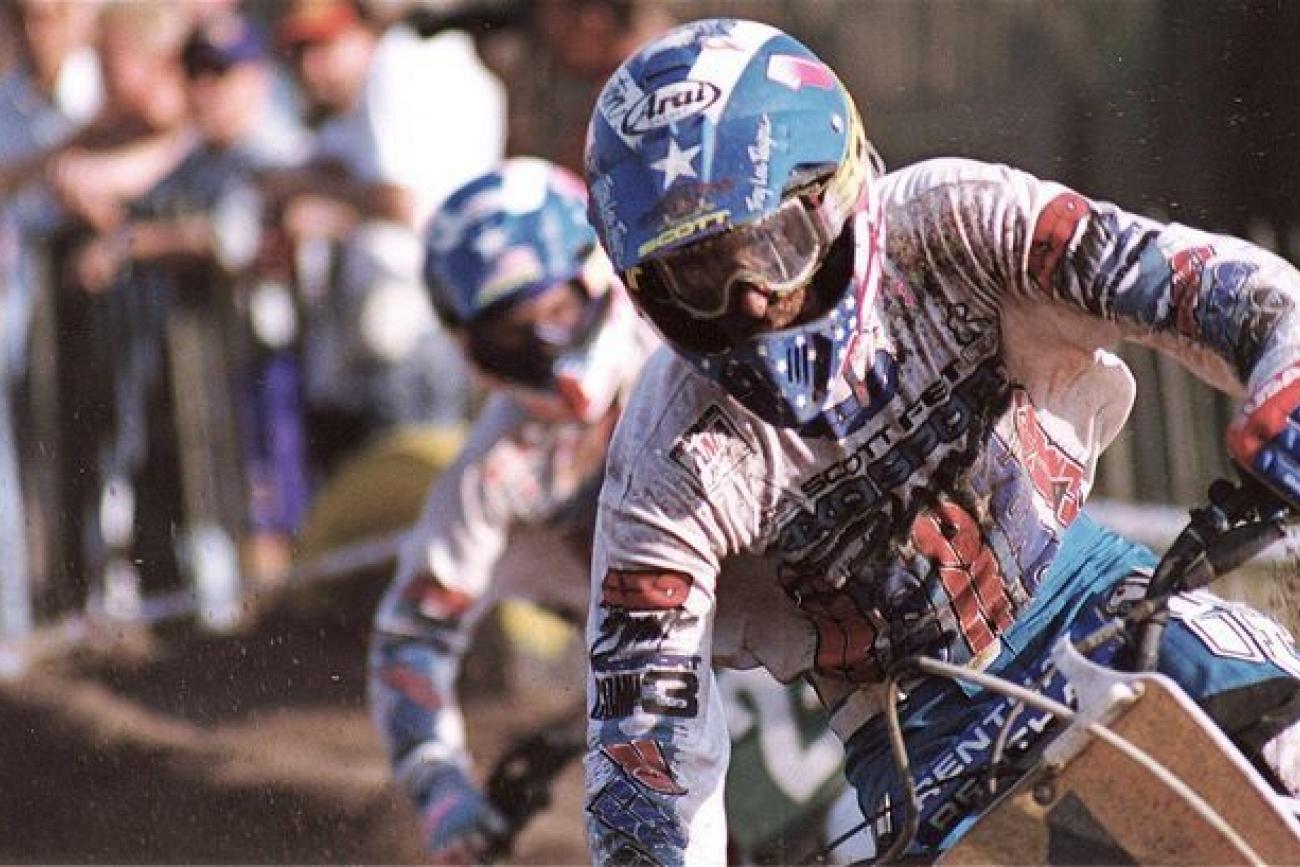 As we count down the days to the 2015 Monster Energy FIM Motocross of Nations, we are looking back at each of the twenty-two winning lineups for Team USA since 1981. Today the Monster Energy Racer X Countdown reaches 1991 and a nail-biter in the Netherlands.

After Jeff Ward, Jeff Stanton, and Damon Bradshaw dodged a bullet in Sweden and won the 1990 Motocross des Nations over Team Belgium by a single point, the FIM went looking for another sand circuit to host the 1991 event (and ’92, looking ahead) and the Swiss-based organization pinpointed the Eurocircuit in Valkenswaard, Holland. More to the point, this part of Europe is the epicenter of the Grand Prix world, smack in the middle of the Low Countries, lined with notorious sand circuits like Lommel, Mol, Genk, Oss, and Valkenswaard.

Heading toward the Dutch border, Team USA drove directly through Lommel, Belgium, as fate would have it, where the winning streak had started back in 1981. Jeff Stanton, Damon Bradshaw and Mike Kiedrowski were the men picked to defend America's decade-long win streak in 1991. The sand-loving Dutch and Belgians were at their battle stations and waiting for yet another new lineup of Americans—not once since the beginning of the streak had Team USA sent over the same team.

Kiedrowski, again crowned AMA 125 MX Champion that year, was picked to ride the 125, Bradshaw would be the 250 rider and Stanton would ride the 500. (And apologies for yesterday’s 1990 piece, which overlooked the three 125 Nationals that Bradshaw rode in the later months of the previous year in order to be more ready for his Team USA assignment.)

"I think the U.S riders are not much faster this year," said recently crowned 125cc World Champion Stefan Everts, whose father, Harry, was on the losing Belgian side at Lommel in 1981. "They will have to fight very hard for a Motocross des Nations win against Belgium."

Everts was teamed with Marnicq Bervoets, who was rapidly coming into his own as a world-class rider, and a revenge-seeking Dirk Geukens. The year before in Sweden, Stanton, in his frenzied charge to the front of the field in the high-drama final moto, intentionally "parked" the 500cc rider, sending him and the Belgian team's hopes headfirst into the sand. Nobody in Belgium had forgotten about it. Meanwhile, just across the pit area, Team Holland was poised to send out Gert-Jan van Doorn (500cc), Edwin Evertsen (250cc), and the sensational Pedro Tragter (125cc), all expert sand riders.

Beneath gray skies in Valkenswaard, an epic crowd of some 30,000 fans—many of them Belgian—rolled into the Eurocircuit to see if their local heroes could finally hand it to the Yanks. As the time to launch the first moto approached, the tension and excitement had reached fever pitch levels.

"The Dutch had a very underrated squad," offered lauded British journalist Jack Burnicle, who covered the event for a host of publications across the globe. "Gerrit Wolsink, the fabled five-time winner of the Carlsbad 500cc USGP, had chosen a young team of Tragter on the 125, Evertsen on the 250, and the wonderful Gert-Jan van Doorn on the 500. Belgium had a tremendous team with Everts on a 125, Bervoets on the 250, and Geukens on the 500. Everyone there was just waiting to see what they could do to the Americans."

When the gate thumped into the sand to launch the opening 500cc/125cc moto, it was Marcus Hansson of Sweden out front and pulling away. For six laps, Hansson held the point before Stanton, who had passed a man a lap, flew by the Swede. From there, the Michigan rider bashed out lap after lap, taking the win some thirty-five seconds clear of Hansson and van Doorn. Meanwhile, the 125cc machines, screaming across the sticky, brown sand, scrambled for whatever places they could. When the checkered flag flew, it was Everts with the win (earning a sixth-place on-track position), followed by Tragter, Germany's Pit Beirer and now-Kawasaki-mounted Kiedrowski, who had come from twenty-second place after starting on the second row.

“It was strange to be starting on the second row,” said Kiedrowski afterwards. “By the time I got past the slower 500s, the leaders (of the 125 Class) were gone.”

Moto two brought out the 250cc and 125cc bikes. On the opening lap it was Finland's Pekka Vehkonen running away from Bradshaw, Alex Puzar (Italy), Peter Johansson (Sweden), and Marnicq Bervoets. Ten minutes into the moto, Bradshaw shoved his way past Vehkonen, as did Bervoets. The battle was on with the tough-talking American against the demure Belgian. Bradshaw held station ahead of Bervoets until there were three laps remaining. Bervoets, then considered the best sand rider in the world, went by the Tar Heel to take the moto win.

“Bervoets caught me off guard when I made a few mistakes,” said Bradshaw after the race. “I don’t think he was any faster, he just made a good pass. If I could have got right back on him earlier, I felt I might have passed him back because he made some mistakes.”

Everts completed a Belgian sweep of the second motos, taking the measure of Kiedrowski and Tragter.

The crowd got what it had come for—a third-moto showdown for global bragging rights. With one race remaining, it was Team Belgium in the lead with eight points, Team USA in second with nine points, Holland third with thirteen.

Recalled Burnicle: "By the time the third moto came around, the conditions were terrible. The black Valkenswaard sand was heavy and wet and sticking to everything. The skies were so dark that the venue had this otherworldly feel to it that was so dramatic. The atmosphere was electric!"

Once again, it was Marcus Hansson with the holeshot. However, three turns in, a large and collective groan went up as Geukens, the weak link of the Belgian effort, bailed—and somehow managed to take Bervoets with him! Just like that, it was over for the Belgians. However, all was not well for the American effort either, as Stanton, who started in the second row, had also crashed. Picking himself up, he frantically kicked the big Honda 500 to life and took off like a wild man.

Meanwhile, Bradshaw was tenth. The Dutch crowd went berserk as van Doorn ran in third and Evertsen had gone by Bradshaw. Stanton, back in twentieth, kept blasting through the sand. A few laps later, Evertsen was up to third and van Doorn, who had recovered well from a small miscue, was fourth and leading the 500cc Class. The Dutch now held the lead of the 1991 Motocross des Nations!

As the race boiled down to the halfway mark, the skies darkened and rain began to fall. Back in ninth and 30 seconds adrift of van Doorn, Stanton kept coming.

"I fell down on the first lap and my bike was all tweaked, the handlebars bent, and I'm last and I said to myself, 'Oh God, here we go, this is not good!'” Stanton recalls. “So I just got up and knew I had forty minutes and just started picking guys off. Every time I would pass the mechanics area I would see all the Americans with droopy faces, but I kept going and next thing I know I'm passing Bradshaw."

Roy Janson, a principal at AMA Pro Racing at the time, was trackside that day as part of the American effort. Says Janson: "Jeff Stanton rode that last moto with the entire weight of the U.S. team, U.S. motocross, and what American motocross stood for upon his shoulders. All through the moto we had written our chances off, but Stanton kept going and going, and at the very, very end, I remember thinking, ‘My God, we're going to win this thing!’”

Valkenswaard had become a survival-of-the-fittest conflict and nobody that day was fitter than Stanton. With two laps to go, he appeared through the blinding roost ahead of Soren Mortenson (Denmark) and Hansson. On the verge of victory, he set out after 500cc Class leader van Doorn.

Halfway around the final lap, Stanton and his growling Honda passed the Dutchman and rode off. It was over. Team USA had won the Motocross des Nations, pushing the win streak to eleven. Through Stanton's heroic effort, Team USA had played in the Dutch and Belgian sand trap and kept a firm grasp on the Peter Chamberlain Trophy.

“I just did what I had to do,” Stanton told Cycle News’ scribe Alex Hodgkinson afterwards. “I didn’t think we would win—I didn’t know where the Belgians were. I was just riding.”

“I think America has to thank Jeff Stanton,” said Roger DeCoster of the man who led the way to victory. “He saved them for the second year in a row. He was the reliable man and he made all of the difference.

“I didn’t want to sacrifice Stanton’s chances because we needed that win,” said DeCoster of the choice to let Bradshaw start up front on the 250. “Stanton proved that it is not so difficult to pass if are good enough.”

"I just kept picking it up," recalls Stanton all these years later. "I could see the enthusiasm on Bevo Forti's face more than anybody. He and everyone else was screaming and urging me to keep going. Then, with only minutes to go, all the Americans are going ballistic, so at that point, Dan [Bentley] had on the board who I had to pass. And sure enough, that's what I did."

For the second year in a row, Team USA has survived by a small margin. The next year’s challenge would prove a completely different one. Tomorrow, Team USA’s legendary “B Team” goes to Australia!

To read more about the twenty-two winning teams, click here.