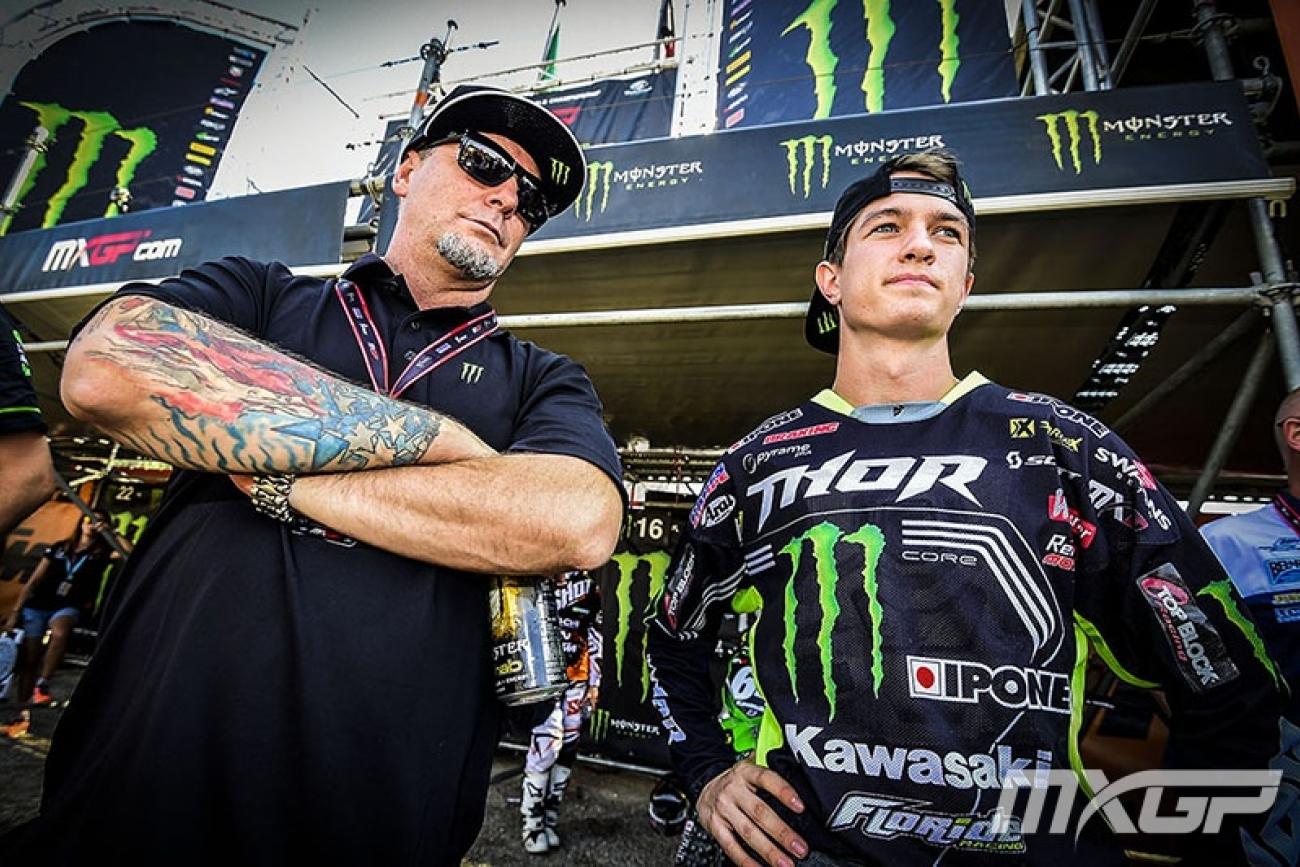 Twelfth in the MX2 championship standings in his second season and with four top six moto finishes, Monster Energy Kawasaki’s Thomas Covington blasted back into the Grand Prix big-time with a 4-1 run at Leon in Mexico to become the first American winner in the MX2 class since Zach Osborne. His speed in the second moto across a rough and drying track represented his best and most notable performance yet on the KX250F as he kept ahead of world championship challenger and series leader HRC Gariboldi’s Tim Gajser. Nineteen years old, Covington has now increased the degree of interest in the Monster Energy U.S. Grand Prix next weekend.

He chats about his first win, moto victory and podium appearance (the first American on the box since Michael Leib three years ago).

Racer X: That came out of somewhere! Describe how you feel.
Thomas Covington: I am beyond stoked. I did not know I had the overall win until I was walking up to the podium and I asked where I should stand. It is an amazing feeling and something I have not had in a long time.

You got out in front in that second moto but Gajser starting pushing you hard.
When I passed [Calvin] Vlaanderen I was feeling good and wanted to put down some good laps and make a gap. Then towards the end my mechanic started writing on the board “Gajser 13 seconds,” “Gajser 10 seconds,” and when I came around the next time it was “Gajser 7 seconds” and I thought ‘Oh, man, he’s coming,’ but I knew I had a big enough gap and the race was coming to an end.

There were a couple of times where a podium finish looked likely this season, and others where you were even struggling for points. This is a big step. Can you explain it?
Actually the last three GPs have gone really well for me. My bike didn't make it to the start of the first moto at Lommel [Belgium] but I had a top ten in the second, which is good for me in the sand. I started building momentum from there. I had good speed at Mantova [Italy] and at Assen [Netherlands] I had some good finishes. I came straight back to California and trained really hard for a couple of weeks. As soon as I came here I had a good feeling on the track. The mud definitely changed things. It was the most slippery mud I’ve ridden in a while in the first moto. I was going so slowly in some parts of the track that I was convinced they would catch me. It was hard to stay up and not crash.

It seems like the bike almost doubled in weight.
It was so heavy! And hitting all those big ruts it just wanted to lie down. It was hard to keep it upright. Back to the other question though, I think it was tough to come straight out of the amateurs in the U.S. and into racing GPs. It is a whole other world. It has taken a while for me to get used to those European tracks and the lifestyle. I think this year has gone significantly better than last year—a lot more consistent top tens—but winning here this weekend is just incredible.

It hasn’t hit me yet. I’d love to do the same thing next weekend. It just feels so good to get a win. It makes me want more.

Is this result vindication on your choice to do GPs and also prove to people that you have what it takes to succeed here? There might have been doubters when the results were not coming.
Yeah, this season has been a lot better and I’ve had a lot of top ten finishes and in the points almost every weekend. I tend to struggle on a few European tracks and I guess I get a bit scared because they are so slippery and rough and gnarly. I’m just not used to it yet. I think since [Ryan] Villopoto came over a lot of Americans have maybe looked for my results and what I am doing. Whenever I’m home and riding the tracks there a lot of guys come up to me and say how cool it is that I’m out here doing this. I’m looking forward to seeing those guys at Glen Helen.

I imagine a podium would have been special but you added a moto win and also an overall. It has come pretty quickly!
Yeah, for sure. I was kind of hoping I would get my first podium at Glen Helen but I’ll take this one too! I took my time to pass Vlaanderen in the second moto and then I really wanted to do those laps because I’ve lost a few qualification races this year in the final stages. So I thought there is no way I am losing this thing on the last lap. I was pushing.

You’re now looking at a third year in Grands Prix for 2016. Is this result affirmation of that choice?
I think it was a quarter of the way through this season I decided I wanted to stay in GPs for the next couple of years. Right now I feel I can make a career in GPs. I enjoy the atmosphere and everyone here has been super cool to me. I’m having a lot of fun.

Will this sink-in in the next couple of days? Some people try for years and never win a Grand Prix.
For sure! It hasn’t hit me yet. I’d love to do the same thing next weekend. It just feels so good to get a win. It makes me want more.

And next week we have Glen Helen.
For the past three months I’ve been looking forward to this race. I’ll go in with the same mind-set. I will try and get on the podium again for the home crowd—that’s the goal. Quite a few American guys will race it and that will change things up a little bit. We should be strong there. I used to do a lot of testing at Glen Helen. For me there is no reason why an American cannot win there next week, whether it is me or one of the other guys.