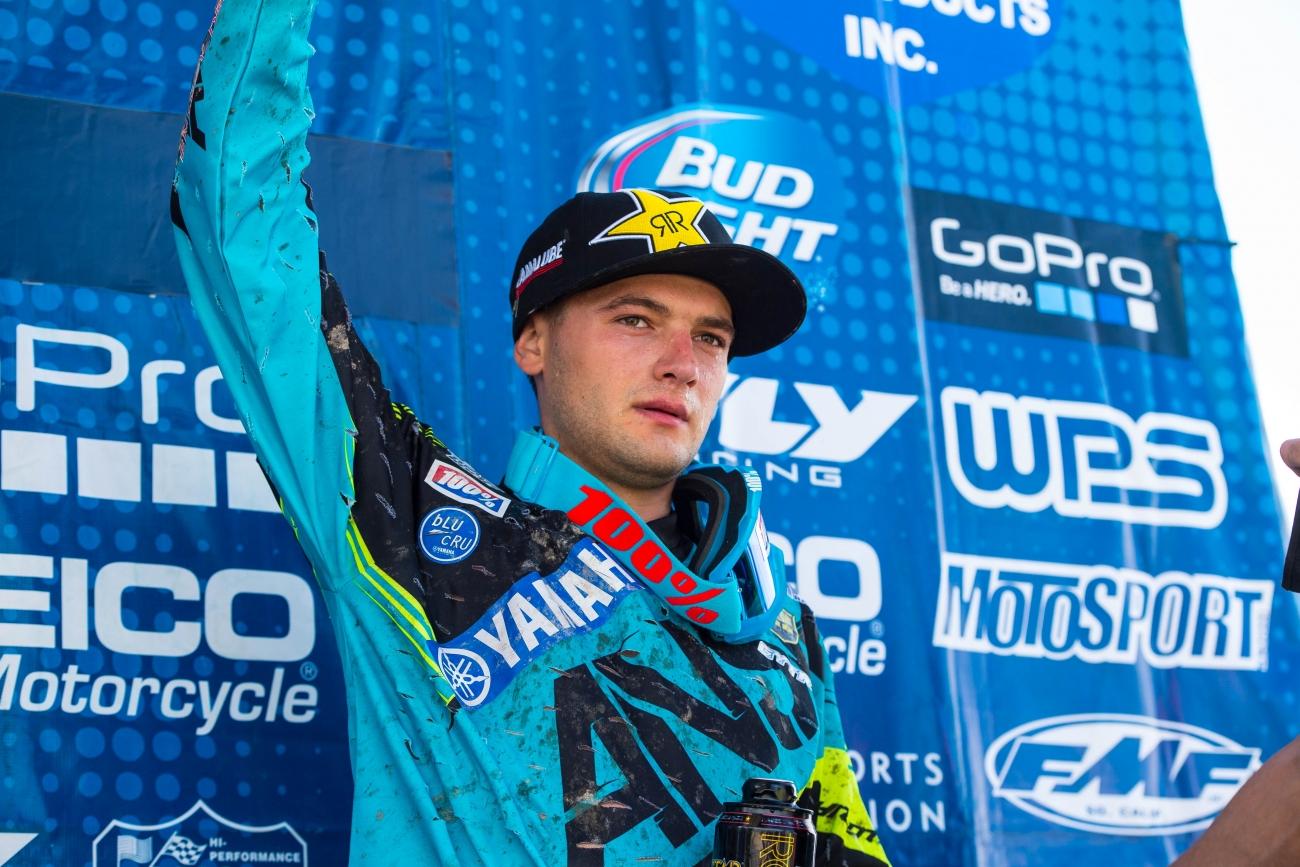 Yamalube/Star Racing Yamaha’s Cooper Webb is definitely the wild card for Team USA’s Motocross of Nations effort. Next weekend’s race in France will mark his first appearance at the ‘Nations, and also one of his first motocross races on a 450. Cooper has, not surprisingly, embraced the challenge, and has been pounding away on a YZ450F to prep for the race. He’ll also line up for this weekend’s Monster Energy U.S. Grand Prix at Glen Helen in the big bike class. We called him to see how all the prep is going, and Cooper was honest as always.

Racer X: So how are the September Stop Watch Nationals going? You still having to hit all the tracks and pound out laps.
Cooper Webb: Yeah. Hitting them all—Perris, Pala, Milestone, all of them. Glen Helen has been pretty decent, and I talked to the guy who runs it and he says they’ve been trying to prep it the way they will for the GP. Everywhere else is pretty dry.

Would you be doing any riding at all if it weren’t for racing des Nations?
I probably wouldn’t be doing any riding at all, so this adds another month to my schedule. That’s okay, it’s not going to hurt me any. It’s all good. With me being hurt at the beginning of the season I kind of missed out on some time there, so I think this just makes up for that time off. This is still exiting.

Could this give you a head start on 2016?
I think so. For one, getting so much time on a 450 now is going to help a lot when I have to get on it for good in 2017, so I can see what I like and see how things work. I’ve learned quickly that the two are quite a bit different. The setup, the power, everything is quite a bit different. I’ve had to change the way I ride to ride the 450 better. For me, this is a whole new challenge, racing the 450, racing des Nations and even racing the GP, because I’m racing against all new riders. So this is a pretty motivating time!

There are other guys racing this GP so you’re not the only guy still doing motos at these SoCal tracks. Have you seen where you measure up? Are you confident?
I feel really good on the bike, but when I first got on it, it was, like I said, totally different. I’ve been working directly with factory Yamaha and they have a lot of options for testing. They’re a lot more involved. It’s been different, but now it’s all good. Adjusting to the bike, it wasn’t even the power at first, it was how stiff it felt compared to my 250. We got it dialed in and I feel really good on it and honestly I think I’m riding it pretty well.

You’re not brand new to a 450, we saw you race one at Monster Energy Cup and Bercy before, but was there a risk in putting a 250 full-time guy on this bike in a high-pressure race like des Nations? Did you, Yamaha, Roger DeCoster, know all along you would be fine?
I think anytime you try something like this there’s a risk. For me I wasn’t too worried because I knew we would have five weeks to figure it out, and I had raced one before, like you said. The first week or two were slower than we would have liked, but now we’re good. Actually, once I knew I was on the team we started testing, so I actually have more than five weeks on the bike. I think it was a risk, though. You never know how guys will transfer from a 250 to a 450. I wasn’t worried about myself, I think my riding style works well for a 450. Also, Roger DeCoster told me this track would work well for my riding style so I’m not too worried.

I think one thing that works for you is that this is a high-pressure event. Instead of being worried, you’re probably just thinking, “This is awesome!”
Yeah, I really am. I’ve tried to pick everyone’s brain, anyone who has raced in Europe or has raced the des Nations before. But it is a high-pressure event, just because you’re not just racing for yourself but for your whole country, and it’s a pride thing. This is to prove to the Europeans, or whatever other countries you’re racing, that the U.S. is the best. Obviously the last couple of years haven’t worked out. And this is going to be an interesting year. There obviously has been a lot of talk, people saying, “Well, maybe this team isn’t going to do anything worth a shit” or whatever. But that’s good. I like doubters—I love when stuff like that happens, it motivates me. I really and truly feel that the more pressure, the better, and I’m going to be ready for sure.

When I got that phone call, it was a dream come true. That’s a huge honor for me.

As far as this GP this weekend, what can you take out of that to help you? Is it a good tune-up?
I think so. It’s great to have a race like this basically in my backyard, and it’s a track that I ride quite a bit. I get to see how those riders race, and also the format with races on Saturday and Sunday. Even going down to the gate, the rules are different, so I can learn that.

For next week, I heard the plan for des Nations is to not do a ton of riding outside the regular race weekend. In past years they’ve gone over early for testing.
We’re flying over there Tuesday and we ride I think just one day to break in the bikes and make sure everything is all good. I’ve heard from people who have been there before that if you do go over early, you start wanting to change your whole setup before they get to the race, because everything is different and it’s easy to get psyched out or whatever. I hear this track is pretty hard packed and choppy, so everyone has told me to set my bike up a little soft for America and I should be good to go. This week I’ve seen a lot of the guys who have spent time in Europe, like Tyla Rattray was in town, so I picked his brain so I could get some additional information. It’s good, we just need to not be stressed and not doubt anything. We’ll have a relaxing week and be fresh for the weekend.

You’ve got three really competitive guys on this team. [Justin] Barcia is not shy about saying he doesn’t like the guys he races with, that he motivates himself that way. You and Jeremy [Martin] are about as competitive as two teammates can be. How are you able to turn all that off?
I think it will be awesome. Everyone is going to have to swallow their…whatever you want to call it. At this race we have the same goal. All three of us are aggressive and want to win, but I don’t think any of us would be like “I’m not going to share this line or a bike setup or whatever.” Plus we have good people coming with us. My trainer Gareth Swanepoel raced the GPs for years, and you’ve got Johnny O’Mara coming over with Jeremy, and on the JGR side a lot of those guys have been there in the past with other riders or when they worked for other teams. Then obviously you have Roger. We have a good group.

How about your man Bobby Reagan [Star Racing team owner]? Is he pumped? I assume he’s coming?
Oh yeah, he’s stoked! Everyone at Yamaha too. Reagan is just loving it. It’s funny because he keeps talking about how every year this team is going to get better and better. To have two of the three riders come from Star Racing that pretty much says what we’re all about.

I’m just thinking about Bobby, and I assume he’s just a red, white and blue American all the way.
I’m sure he’ll have an American flag bandana on him or something!

It’s good that you’re having fun with it. If someone told you a few months ago you might be going would you have believed it?
Not really. I mean, I thought if I could maybe win the 250 outdoor championship or be a contender, then yeah. But after I got hurt, the plan was to come back and do the best I could. That was it. I didn’t even think this would be a discussion. I figured it would be Jeremy, [Ryan] Dungey and the next-best 450 guy. Then not long after I got back people started telling me I had a chance to be on the des Nations team, and I was thinking it was awesome, but how could that be? Jeremy was leading the championship. Then the rumors started going around about Dungey not going, then I realized what everyone was talking about. I just needed to prove I could win and be a competitor. When I got that phone call, it was a dream come true. That’s a huge honor for me.